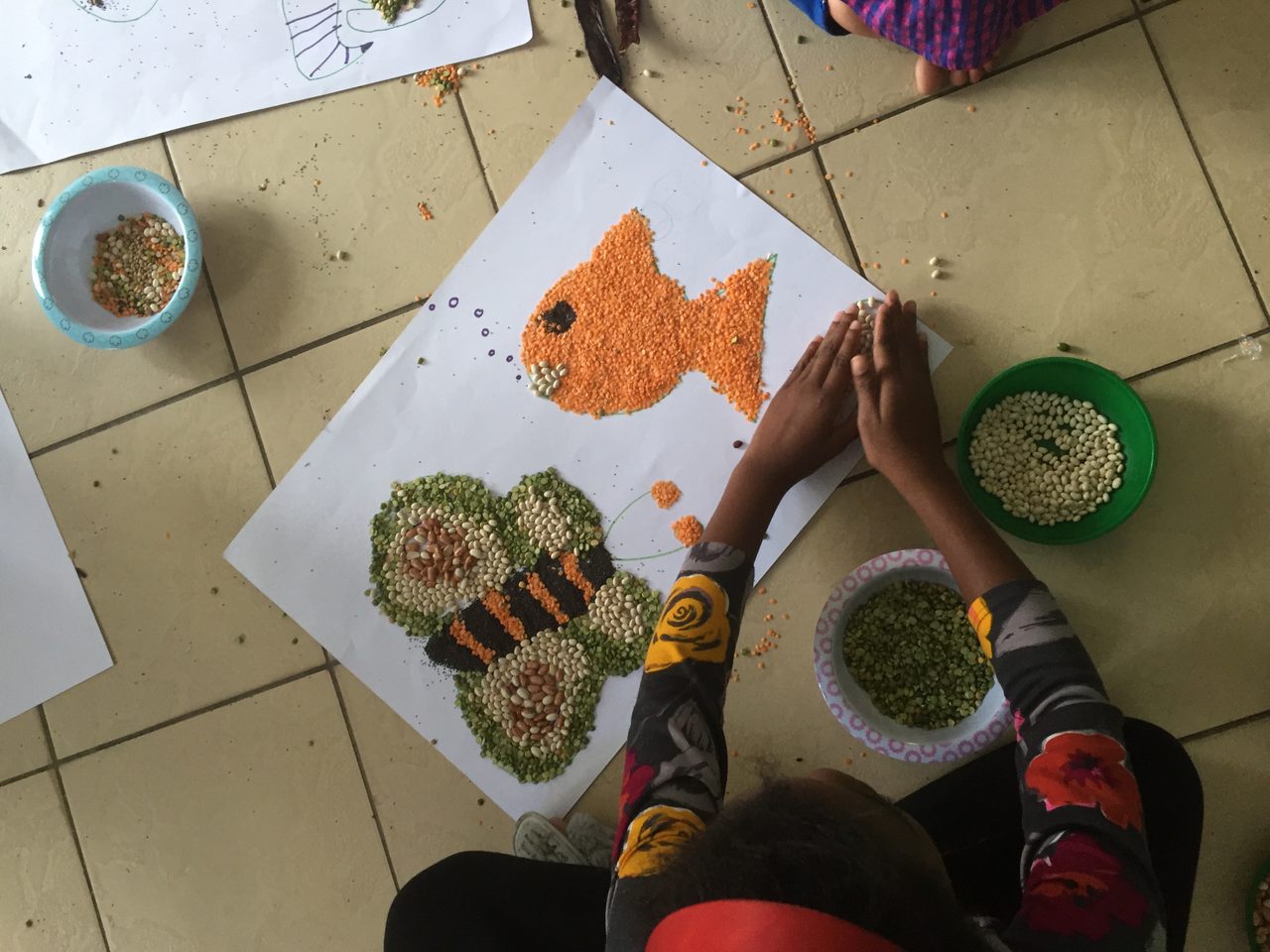 Khan also holds workshops for children to interact, play with, and learn about seeds. Courtesy Zayaan Khan
In This Story
Destination Guide

Zayaan Khan’s work as a seed librarian and horticulturist often seems fun and playful. As she talks to insects, sticks her hands in the dirt, and puts strange plants in her mouth at her workshops, it’s obvious she finds joy in what she does. But much of her practice revolves around the confrontation of a traumatic past.

In South Africa, colonization and genocide have erased millennia of local food knowledge, leaving the country with a food system at odds with what the land can actually provide. Through sharing seeds and teaching food preservation, Khan hopes to create a more equitable food system.

The greater Cape Town area, on the west coast of South Africa, is one of the most biodiverse places on earth. The land is a unique multiverse of plants, animals, and insects, many of which exist nowhere else. But rapid urbanization and forced displacement over the last 50 years forced many people away from the land and towards corporate entities like supermarkets for accessing food, “even if the supermarket is far away,” Khan says. This is a big problem, when one in five South Africans live in extreme poverty. This issue is the foundation of Khan’s work.

Khan, the daughter of a school librarian, has always sought knowledge. In 2003, she started studying journalism at university, but she found the field not stimulating enough. Instead, she plumbed her own background for inspiration. Khan is deeply tied to Cape Town, belonging to the Cape Malay/Cape Muslim community, a group that descends from people enslaved or brought as indentured laborers by the Dutch East India Company from other colonies.

However, Khan finds the Cape Malay identity too limiting and prefers to use the term Cape Creole, which has a greater acknowledgement of indigenous heritage. In South Africa, terms of identity are fraught and complex, but Khan seeks to reconnect people to their roots, whether they identify as indigenous, Black, Cape Creole, or Cape Malay. This is an especially powerful form of resistance, considering how a recent state audit shows that 72 percent of agricultural land in South Africa is owned by white people—a community that makes up less than 10 percent of the population.

In 2005, Khan found her curiosity piqued by the ecological history of the Cape, and spent the next five years studying landscaping and horticulture at different universities in Cape Town. She came to understand that this huge disconnection and separateness between the food system and the land is due to centuries of loss through the destruction of foodways, people, animals, and land at the hands of European colonizers. For example, the Khoi peoples, some of the early inhabitants of the Cape, were decimated by both diseases brought by the Dutch and by brutal violence.

Along with the destruction, Europeans brought with them plants they were familiar with and introduced numerous invasive species. Many of those plants, Khan explains, are less drought-resistant and more prone to fire than indigenous plants.

Fascinated by the horticultural history of the Cape around her, Khan followed in her mother’s footsteps and became a librarian herself, of a slightly different kind. In 2011, she opened the Seed Biblioteek in her Cape Town home, offering seeds, art, recipes, and even jewelry made from seeds. Anyone is welcome to borrow from the library.

To Khan, the difference between a seed bank and a seed library is that libraries encourage the movement and use of seeds, as opposed to saving and storing them. “The idea of a seed bank has a different connotation; it implies creditors, debtors, and the building of reserves.” A seed library, she emphasizes, has no connotations of financial exchange. Instead, hers relies on a system of lending. “If you were to borrow anything from five seeds to a kilogram of seeds, that’s what we would get in return the next season.”

Khan’s own garden is an otherworldly one, full of various plants that feed her, others, and the library. These plants include Strelitzia nicolai, or wild banana, and the medicinal but poisonous Boophone disticha, whose bulb coverings, Khan says, can be used as bandages. There are Cape Aloe trees, whose flowers feed bees and other insects, and the indigenous Lablab purpureus, also known as simply lablab or hyacinth beans. The latter arrived a season after Khan’s initial attempt to grow them was hijacked by snails. Khan shared with Instagram followers her process: “Waiting for recipes to rise up at me as I trawl cookbooks while the seeds harden. There will be enough for one meal for sure with a few seeds left for the library.” A few weeks later, Khan cooked the beans into a delicious curry with sweet potatoes, kale tops, and coriander blossoms.

Beyond making seeds available to her community, working in community garden spaces in government-neglected areas around Cape Town, and holding workshops for children, Khan has also dove into researching other lost foodways. As so much of this history was shared orally through generations of indigenous people, knowledge became severed through ongoing cycles of violence. Often, she found herself looking through out-of-print cookbooks or exploration accounts, mostly written by Europeans. “There’s so much information in there, even though they’re so racist and difficult to read,” she says. But she would come across things that people no longer ate, such as South African penguin eggs or flamingo eggs.

Along with uncovering age-old food history, Khan also researches and teaches preservation techniques, especially fermentation. Teaching how to transform food for preservation means that people can build a long-lasting pantry using indigenous plants that are readily available. It’s here that Khan waxes poetic. “There’s a kind of slowing down of time through preservation, you’re essentially making little time machines,” she says, “You really didn’t do much, you just packed the salt, put the lid on, and all this magic happens.” But she also is open to combining ancient knowledge with current realities. When she had a surplus bounty of tomatoes (a non-indigenous food), she sought ways to preserve them. One night, she dreamt the answer: turning them into mebos. Mebos is an old Cape recipe for preserved apricots, but in this case, even tomatoes, sun-dried and packed with sugar and salt, can become a sweet, salty, sticky treat.

To Khan, dreams are a powerful source of inspiration. Sometimes, she says, she’ll come up to answers to thorny culinary questions in her sleep. But one dream Khan would like to make reality would be to move her Seed Biblioteek to a public space, where she could provide formal training in seed knowledge. As one of the few people in South Africa to be doing this work, and one of the few people of color in a whitewashed and often over-romanticized field, she feels an immense sense of responsibility. After all, re-familiarizing people with the ability to pursue food security and connection with their ancestors is an enormous, daunting task.

These days, Khan is busier than ever. In 2021, she embarked on a PhD, and, currently, she’s pregnant with her second child. Even after all she’s done, Khan sees her work with indigenous food as just the beginning, and she’s enthusiastic about the future. “I’m able to continue telling a story of the way that my ancestry and lineage is intertwined with the land,” she says, “in such a way that makes me believe that I’m in the right place, doing the right thing.”

They are being recovered from seed banks, university vaults, and museum shelves.
museums

But can it be grown anywhere else?
Video • Wonder From Home

The frozen treats at this Cape Town parlor are inspired by Africa's food cultures.
Condom, France