The Blue Ridge Honey Made ‘by Bees and Angels’ - Gastro Obscura
Want to see fewer ads? Become a Member. 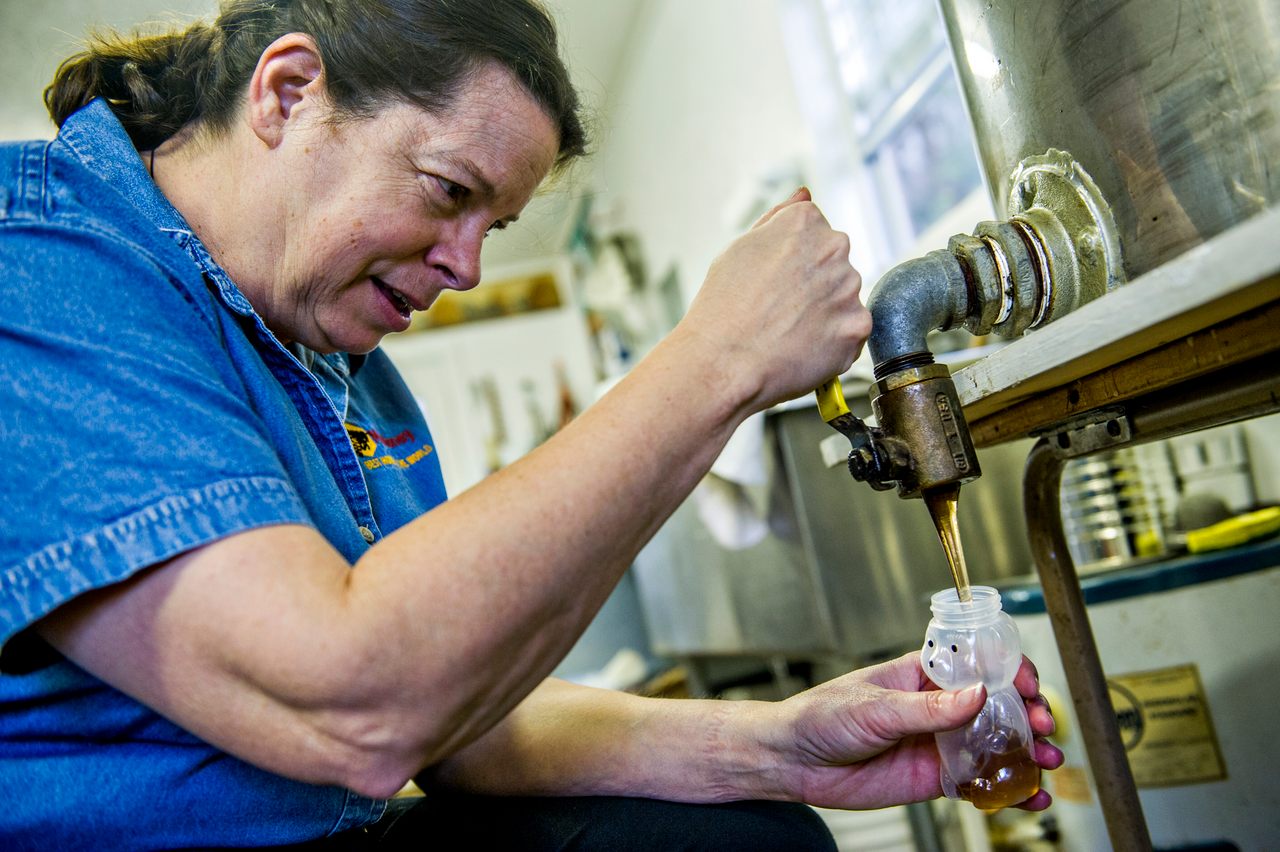 Virginia Webb can barely see through the cloud of bees as she inspects her hives. Standing in a lush forest meadow, she still carefully inspects each one—habitual work that has become instinctive at this point. Webb, a renowned beekeeper in Clarkesville, Georgia, has been mingling with bees and honey since her father introduced her to the craft in the 1960s.

To the untrained eye, the nectar stashed inside Webb’s hives looks like the typical golden syrup almost every American family has in their homes. But this is no ordinary honey. In fact, it’s unique to the Blue Ridge Mountains, produced from pollen provided by the sourwood trees that grow exclusively in the area.

Unlike standard honey, the sourwood’s amber and greenish-tinted nectar has a distinctive gingerbready flavor with mint and anise undertones. Conservationist Carson Brewer once described it as “being made by bees and angels,” a phrase that perfectly captures the personality of this rare and highly desired artisan honey.

The honey is known, like the tree endemic to the Blue Ridge, as sourwood. Why the tree only grows here remains a mystery, but it’s generally assumed that the mountainous region has just the right combination of soil, sun, and rain for it to thrive, particularly in southern West Virginia and Virginia, western North Carolina, eastern Tennessee, and northern Georgia.

In the Blue Ridge, residents have relied on this unique tree for centuries to satisfy their sweet tooth or as a tonic for gastrointestinal issues. The tree features in a myriad of regional cultural mementos, from the title of the old bluegrass folk song Sourwood Mountain to the names of natural landmarks and inns. Its honey is also the guest of honor at the annual Black Mountain Sourwood Festival and the Cherokee Fall Festival.

To the Cherokee, sourwood has always been special. Known as Nûdâgweja, its sour leaves and honey were used to concoct soothing teas, season soups, and create medications for respiratory issues. Nothing was left to waste—its bark and branches were whittled into sled runners, spoons, arrowheads, and pipes—and it features prominently in Cherokee storytelling. Despite the U.S. military’s forcible relocation of the Cherokee in the 1800s to reservations beyond the sourwood’s range, it remains important to many today. The celebrated woodcarver Goingback Chiltoskey, who passed away in 2000, often gave sourwood carving demonstrations, and his wife, Mary, wrote about sourwood traditions in Cherokee Plants and Medicine and Cherokee Cooklore.

According to beekeepers such as Webb, and akin to Cherokee belief, devoting yourself to sourwood honey means accepting how little is in your control. The harvest happens in July or August, unless it doesn’t happen at all. As Webb and many other beekeepers have observed, sourwood requires a wet spring and a dry summer to flourish. They also insist that elevation is critical, because the higher the tree is on the mountains, the more stimulating sunlight it will receive, resulting in its honey being more succulent.

Still, for Webb it has become a way of life. She says it’s worth it, and reminisces frequently about how the honey, which they sold at local hardware stores, was an important part of their family income. To her, sourwood is a family tradition that she’s proud to continue. In 2005, her sourwood honey won the World Honey Show’s highest award.

Over in West Virginia, Mark Lilly has been gathering sourwood for more than 25 years. Lilly is the head beekeeper of the Appalachian Beekeeping Collective, a non-profit founded to encourage Appalachian residents to take up beekeeping, particularly with sourwood, as a way to boost the local economy. “Sourwood only grows in a small geographical area, making it highly prized,” he says. “Often, its demand outweighs the supply.”

The honey is commonly found in Blue Ridge farmers’ markets, but the internet helped sourwood’s renown spread. This more global demand leads to more orders than beekeepers can meet. Mike Elliott of Pure Pisgah Honey says he can expect to harvest up to 25 or 30 pounds of honey, and a significant portion goes immediately to online sales.

In the Blue Ridge, the honey is often eaten by the spoonful, used for a finishing sauce, or mixed into a yogurt parfait. Webb also raves about her sourwood sandwich, which features two lightly grilled slices of bread slices filled with peanut butter, a dollop of sourwood, sliced banana, and a sprinkle of cinnamon.

But the coveted honey faces multiple environmental challenges. Climate change, for instance, has led to an influx of unpredictable, strong storms that can wash away the treasured nectar. Additionally, the increasingly warm summers have led to sourwood flowering earlier, throwing off the bees’ relationship with the blooms. Elliott also says beekeepers have to keep a watchful eye out for the Varroa mite, which can sneak into the hives, wreaking havoc on the bees’ health and eventually causing the dreaded colony collapse disorder.

Still, sourwood honey remains a staple in Blue Ridge homes. A tablespoonful can instantly transport locals back to childhood memories of the honey thickly drizzled over warm biscuits. “I believe going to Heaven smells like a bustling honey house with the nectar being spun out of honeycombs,” says Webb. “Sourwood is an entire bodily experience.”

An archeologist is mapping out the last remaining trees.
trees

A company is using garden trees to revive an ancient industry.
trees

Hadrian's estate has trees found nowhere else on Earth.
Video

Dine like an American revolutionary at Colonial Williamsburg.
Charlottesville, Virginia

Thomas Jefferson's estate is home to hundreds of varieties of historic fruits and vegetables.
Alexandria, Virginia

Taste the white whiskey that the United States' first president once distilled and enjoyed.
Alexandria, Virginia

The only place for a truly presidential dram.
Want to see fewer ads? Become a Member.
From Around the Web
THE GASTRO OBSCURA BOOK
Taste the World!
An eye-opening journey through the history, culture, and places of the culinary world. Order Now