Inside the World's Only Sourdough Library - Gastro Obscura
Want to see fewer ads? Become a Member. 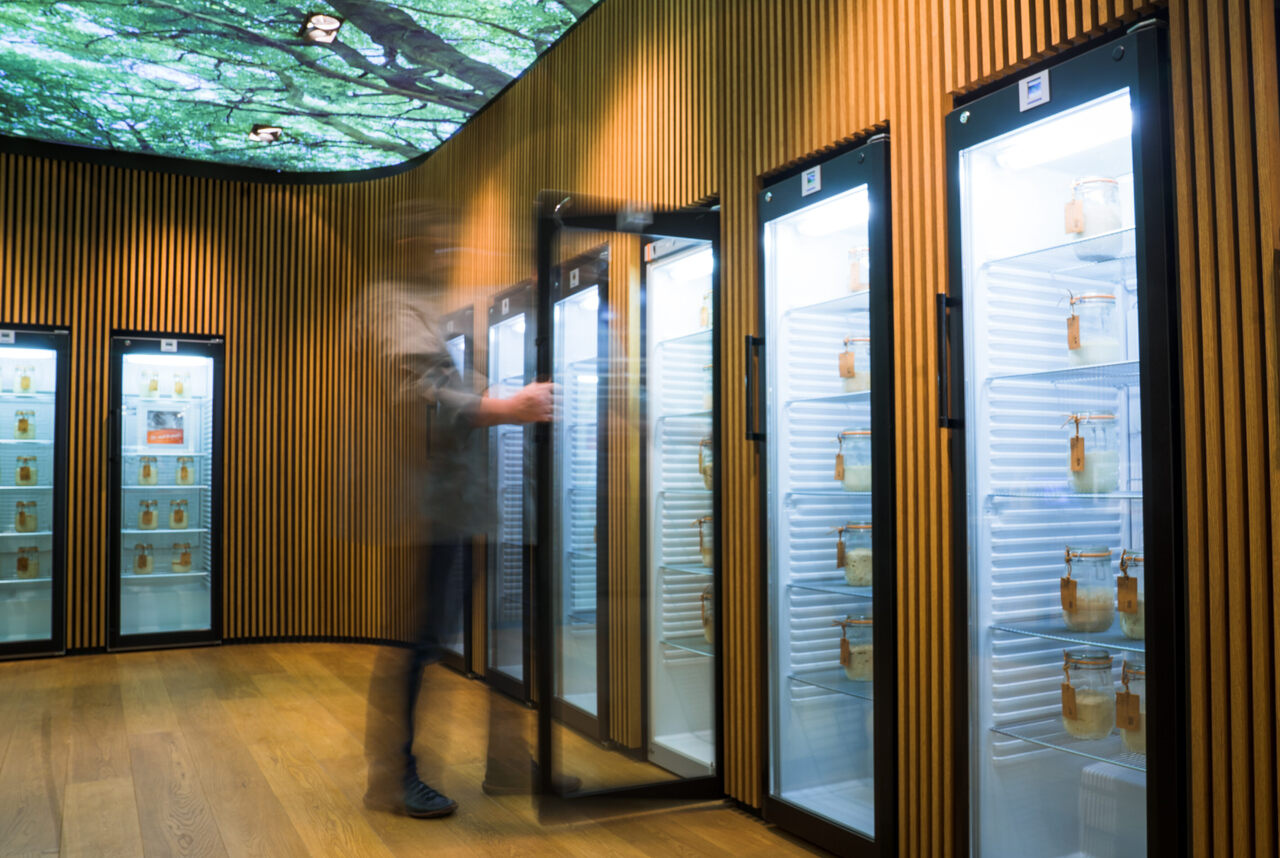 Unlike books, the starters need to be fed regularly. All photos courtesy Karl De Smedt
In This Story
Place

Burbling away in refrigerators are 105 sourdough starters from around the world.
Place

In the tiny municipality of St. Vith, Belgium, there’s a most unusual library. Unusual, that is, because the objects on its shelves need to be fed every few months. Burbling away in refrigerators are 105 sourdough starters from around the world. It’s a modern way to store what used to be a familiar feature of home kitchens: starters, the fermented mixtures of flour and water added to dough to provide rise and flavor.

The Puratos Sourdough Library is not in an area famous for sourdough. Especially among Americans, San Francisco may be best known for the bread. But according to Karl De Smedt, the sourdough librarian, sourdough belongs to the entire world. Until 160 years ago, “everyone who was making bread was using sourdough.”

De Smedt is both an obvious and unlikely candidate for the world’s first sourdough librarian. A confectioner and baker by training, he is passionate about sourdough and has worked at the Belgium-based bakery supply company Puratos since the ’90s. He’s also essentially allergic to flour. But this is not uncommon for bakers—De Smedt developed his asthma-like symptoms in 2002 due to his long exposure to flour dust.

Due to the condition, De Smedt shifted to corporate training at Puratos. At the time, global interest in artisanal bread, especially sourdough, was growing. Puratos had long been collecting bread starters for research, starting with a San Francisco sourdough in 1989. Puratos opened a Center for Bread Flavor in St. Vith in 2008. As the Center collected bread starters, De Smedt proposed displaying them in one place. Given essentially carte blanche by Puratos to promote the center’s projects and sourdough in particular, De Smedt oversaw the opening of the Sourdough library at the center in 2013.

The library’s website likens the project to other preservation centers, such as Norway’s Svalbard seed vault. According to Anne A. Madden, a microbiologist at the Rob Dunn Lab at North Carolina State University, the story of humanity has long been entwined with sourdough. Madden, who works on the Dunn Lab’s Sourdough Project, nevertheless says that microbes in sourdough “remain somewhat of a mystery.” (Researchers have long devoted more attention to other fermented products, such as beer.) Efforts like the library are important, since by not studying sourdough, “we might be losing flavors and bread aspects that we’ve not yet experienced.” But there’s undoubtedly a commercial element to the library: In 2015, Puratos CEO Daniel Malcorps told attendees at an industry event that customers are clamoring for artisanal tastes with a heritage, especially that of sourdough.

When collecting starters, De Smedt prioritizes renown, unusual origins, and often, their estimated age. When I ask about the oldest starter in the collection, De Smedt says there’s no surefire way to tell. “If someone tells me I have a 500-year-old sourdough, I have to believe them,” he says. How a starter is fed and maintained can change its microbial colonies, sometimes completely. At some point, it’s hard to say if a century-old starter is really that old. Part of the purpose of the library is to maintain the sourdough starters in a state close to how De Smedt gathered them. De Smedt hopes that over decades, the starters collected in the library will be continuously maintained so that they can be researched for aging, a new frontier for sourdough.

The lack of sourdough knowledge is surprising given its long, ubiquitous history. Ancient Egyptians in 4000 B.C. were likely the first to use fermented dough, creating a raised bread with a complex flavor. Madden defines sourdough as bread fermented with the yeast, lactic acid bacteria, and occasionally acetic acid bacteria present in its environment. The different types of bacteria influence the flavor, sometimes even producing dough that isn’t at all sour. Humanity was addicted to naturally-leavened bread. Antoine-Augustin Parmentier, a French scientist, published a book in 1778 lamenting “the laborious slavery of the bakers,” whose livelihoods so depended on the microbial health of their levains that they would be checked and fed every three to four hours, depriving the poor bakers of sleep.

Sourdough’s universality declined when easier methods developed to make bread. By adding brewer’s yeast to dough, some bakers managed to get a rise without needing to keep a starter. Out of brewer’s yeasts came the first commercial yeasts, which proliferated in the 1860s and created a more predictable, if less interesting, bread. Understandably, many people swapped out their starters for less-laborious yeast cakes.

To amass his collection, De Smedt travels to areas that have maintained strong sourdough traditions. This often means former gold-rush frontiers, such as San Francisco and the Yukon, where humble conditions once made early commercial yeasts unreliable. Last week, De Smedt returned from Seattle, Alaska, and Canada, where he collected three starters said to be left over from the Klondike Gold Rush. (His visit caused a small local news furor.) He took one of his own starters with him, and when his camper got too cold, he took a cue from miners of yore and slept with it to keep it warm.

De Smedt’s process of collecting sourdoughs—whether in Greece, Mexico, America, or Japan—sounds as delicate as transporting a kidney. “It’s a very strict protocol,” he says, meant to prevent contamination and changes in temperature that could affect the starter. The library provides a special box with components that need to be frozen before the starter is poured in. Then, it’s airmailed to Belgium. The original baker also needs to donate yearly supplies of flour to the library to maintain the starter. “This week we are feeding the sourdoughs to keep them alive,” De Smedt explains, a process that happens every two months.

According to De Smedt, there’s a hippie element to sourdough’s resurgence. Many artisanal bakers began experimenting with natural leavening in the 1970s, as a way to make bread that tasted more old-world. The interest in sourdough has renewed studies of yeast and bacteria strains for hints about the past and clues on how to make bread even better.

By sequencing the microbiological makeup of starters, the library is already finding patterns linking the world’s sourdoughs. Two starters, one from Switzerland and one from Mexico, share a wild yeast, Torulaspora delbrueckii, present in none of the others. It’s a puzzling phenomenon that De Smedt thinks may be linked to their high-altitude origins. In another instance, two starters contained the same combination of lactobacilli, and the only connection was that they were both created by women.

The library also has a website called “The Quest for Sourdough,” where bakers worldwide can register their starters and the ingredients used to make them, which include everything from rye flour to juice. Another feature showcases the flavor profiles of the library’s collection: whether a starter will produce a bread that is sour, umami, or even sweet.

One collaboration, with the Rob Dunn Lab, has resulted in a particularly important finding: that each baker who makes a starter puts a stamp on it—and the bread they then bake. Last year, the library sent identical flour and a starter recipe to bakers from 16 countries, including Madden. Then, the bakers traveled to Belgium with their starters. The point is to research the effect of microbes on bakers’ hands. Though the data is still being analyzed, Madden says that the flour is a major source of microorganisms, and “some of the microorganisms that vary across sourdough starters are also found on the hands” of the participants.

But unlike most libraries, you can’t check out the starters in St. Vith. The library isn’t open to the public (although if you’re in St. Vith and contact De Smedt through social media, he’ll happily show off the collection), and De Smedt says that the starters are still the property of their home bakeries, so he can’t dole them out. On occasion, though, De Smedt takes some starter home and bakes some sourdough. (As long as he’s careful, he won’t aggravate his allergies.) With 105 different sourdoughs to choose from, he likely won’t get bored anytime soon.

Every City Has Its Secret Gardens

For 40 years, Fernando Padilla has sculpted with dough.
science

From crispy popovers to artful bird cakes, take a carb cruise around the world.
food

According to this bar, God gave an “11th commandment” to Antwerp: Thou shalt drink beer.
Antwerp, Belgium

This small corner bar is home to a rare 1930s dance organ that still plays tunes for one Euro.
Brussels, Belgium

Drink among marionettes at this pub inside a historic puppet theater.
Vleteren, Belgium

Stocking up on the world's best beer requires a pilgrimage to a monastery drive-through.
Antwerp, Belgium

To enter this cluttered-yet-cozy sanctum of Belgian brews, ring the bell and tell the gatekeepers you've come “to taste beer.”
Want to see fewer ads? Become a Member.
Related

A Visit to the World's Only Sourdough Library