How to Clear a Path Through 60 Feet of Snow, Japanese Style - Atlas Obscura
Want to see fewer ads? Become a Member. 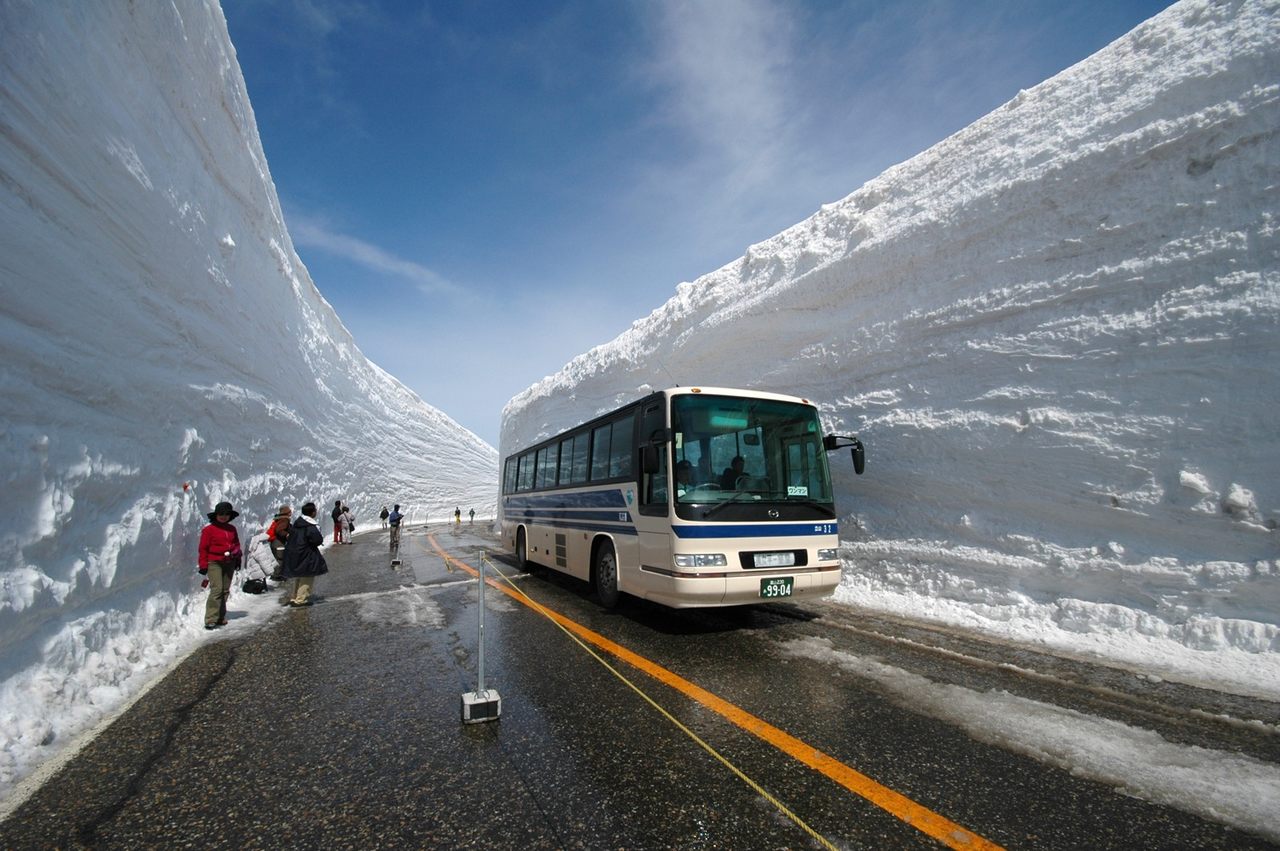 The towering snow walls of Tateyama. Pietro Zanarini/CC BY 2.0
In This Story
Destination Guide

The Hida Mountains are part of the Japanese Alps and meteorologists suspect that parts of the range receive as much as 1,500 inches of snow a year, or 125 feet. Piled continuously, that would be snow nearly half as high as the Statue of Liberty.

Amazingly, there is a highway that runs through a part of this epic snow country. Route 6 begins in the 420,000-person coastal city of Toyama, approaches the western flank of Mt. Tateyama, then disappears into a tunnel. The route eventually emerges on the other side of the Hida Mountains, in Nagano Prefecture, where the 1998 Winter Olympics were held. But just before the road enters the tunnel—and just after it passes the remote and The Shining-esque Tateyama Kokusai Hotel—it runs for about a quarter-mile along the base of a broad ridgeline. In Japan this particular stretch of highway is known as yuki-no-otani, or Snow Canyon.

The height of the canyon’s snow walls can reach a staggering 66 feet. Using another New York City analogy, that would leave your average five-story East Village walkup apartment building buried head to toe in snow.

“The amount of snow that falls here is just exceptional,” says Yoshihide Tanikawa, Vice President of the Toyama Prefectural Road Public Corporation, which is in charge of snow plowing across many parts of  Toyama Prefecture, including the Snow Canyon. The reason behind the tremendous snowfall is a confluence of geography and meteorology. “Toyama is on the coast with an elevation of zero,” explains Tanikawa, and just 20 miles from the ocean is Mt. Tateyama. “So the altitude rises from sea-level to 3,000 meters [9,843 feet] in a very short distance.”

Every winter the western part of Japan, what has come to be known as Snow Country, experiences a winter monsoon. Frigid Siberian air streaming south and east across the relatively warm waters of the Sea of Japan generates snow clouds, which unleash their flakes as they approach land. The phenomenon is similar to lake-effect snow in the U.S. But while the Great Lakes can freeze over, effectively shutting off the snow machine, the Sea of Japan stays open all winter long. Coastal mountains such as Mt. Tateyama amplify the snow.

Heading further down the list the numbers skyrocket. Tokamachi is Japan’s snowiest small city, with a population of about 54,000; it gets 460 inches of snow a year. And Sukayu Onsen, a traditional Japanese hot spring resort high in the Hakkoda Mountains, and not far from Aomori, is the snowiest inhabited spot in Japan—and perhaps in the world. Sukayu’s annual tally: a stupendous 695 inches. That’s 26 times more snow than New York City receives in a winter, and more than six times as snowy as supposedly snowy Syracuse. Perhaps just as remarkable, the road to Sukayu Onsen is open year-round. The question arises: How on earth does Japan remove all of this snow, and not be plagued by a winter of continual snow days?

“This is a job and someone has to do it,” says Takuma Igarashi, a Japanese snow plow driver of more than 20 years. “We might be doing it in the shadows, but it’s for the benefit of everyone.” Igarashi, who recounted his experiences while dressed in red sneakers, a thick work jacket with a yellow reflector vest and a hardhat, presently plows snow in Toyama, the coastal city where the road to the Snow Canyon begins. Toyama’s snowfall is not as grand as many spots in Japan, but this city of more than a million people still gets 144 inches a year. When told that New York had closed schools across the city last February for a storm that dropped nine inches of snow (23 centimeters), Igarashi laughed.

“Here in Toyama sometimes you’ll have 20 to 30 centimeters of snowfall in just one night,” he says. To ensure roads are clear for the 6 a.m. Toyama commute, Igarashi and a crew of hundreds of other snow plow drivers work through the night. “If we don’t remove the snow,” he says, “no one would be able to pass.”

At the Snow Canyon, the non-human star of the show is the HTR608, a rotary snow blower made by the Nichijo company—the 608 refers to the 608-horsepower engine. The HTR608 can plow through snow up to six feet high. The rotating bar helps pull snow into the machine, and a powerful propeller ejects it out of an aerodynamic pipe that can spray the snow nearly 50 feet high and half a football field to the side. But before this monster can even begin its job on the Snow Canyon, a series of prior snow-clearing events must take place.

Mt. Tateyama receives too much snow and is too remote to receive continual snow plow treatment, thus for much of the winter snow is allowed to bury the pass. Sometime in early March, a bulldozer specially equipped with both a GPS and a mobile satellite phone is sent up the mountain and over the Snow Canyon. The GPS and sat phone work in tandem to provide the driver a detailed video screen image of the dozer’s location in relation to the center of the snow-buried highway. This driver’s job is not to clear snow, but simply to lay out an accurate track of the road itself. Following the GPS dozer is a team of dozers that will begin the clearing operations. The first bulldozers will push and carry the snow forward, to areas where depths are lower and it can be pushed aside or dumped. Backhoes are used to help widen the road. When the bulldozers have come within six feet or less of the road, the rotary blowers can begin their work, and help to at last reveal the long buried asphalt.

To plow the 14-mile section of road that runs from the edge of Toyama and through the Snow Canyon takes about a month. By mid-April the Snow Canyon is typically ready for tourists. Last year, 270,000 people visited. “Originally, removing the snow was just to be able to bring people and supplies to the Tateyama Kokusai Hotel,” says Tanikawa, “but then we realized that we have something fairly exceptional, and why not bring people to see the walls.”

But whether the Hida Mountains, and Japan in general, will continue to receive epic snowfall as the world warms is another question. Dr. Hiroaki Kawase, of the Japan Meteorological Agency, has researched the issue. As temperatures rise, snowfall across the west side of Japan should decrease, Kawase reported, in a November 2013 study published in the Journal of Geophysical Research. But the decrease will be much more pronounced at lower elevations, such as Toyama, where much of the city’s snow falls with temperatures near the freezing mark. A few degrees warmer here will make a big difference. Higher elevations will likely continue to have exceptionally snowy winters, at least in the short term. Still, the culture of Japan’s Snow Country may already be changing.

“I remember when I was in high school there was a lot more snow,” says Tanikawa, who is now 50. “In the morning snow fell and it would fall all day while we were at school. When I came back home there would be 40 to 50 centimeters of snow to clear.”

“My children,” Tanikawa adds, “have not had that experience.”

I was astounded; 40 to 50 centimeters of snow is about 16 to 20 inches, and I wondered if it had ever snowed enough—and more importantly, the snow having outpaced the snowplows—for Tanikawa to have experienced a snow day as a child.

The answer of course, was no.

Thanks to Mathieu Glacet for translating interviews.

In Indianapolis, a Series of Ramps Just for Ducklings

They can grow 12 feet wide.
maps

Where Chicago Hides Its Snow

The city has over 500 lots to store any extra accumulation.
tunnels

Want to see fewer ads? Become a Member.
From Around the Web
Atlas Obscura Trips
Artisans & Exiles: Exploring the Hidden Traditions of Japan’s Sado Island
View This Trip
Thanks for sharing!