Sled Dogs Have Long Been Central to Life in the Arctic - Atlas Obscura
Want to see fewer ads? Become a Member. 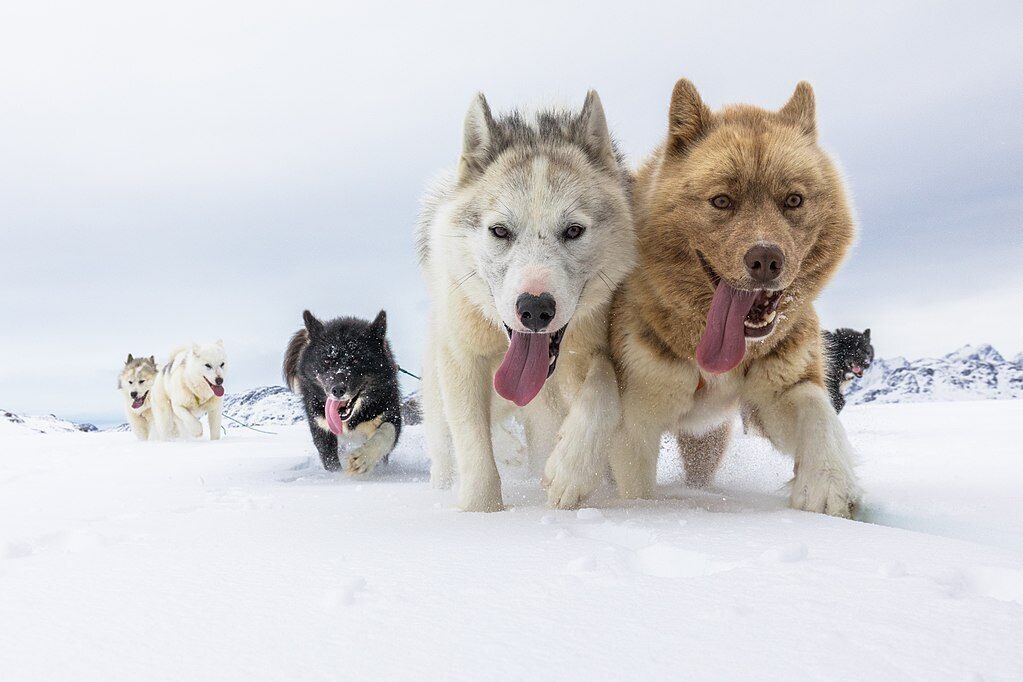 The history of dogs in the Arctic is almost impossible to separate from the history of humans there—the two species have been long been best friends and relied on each other for survival in a challenging environment. Now, an extensive study published in Proceedings of the Royal Society B has examined what dogs meant to the people who first populated North America’s Arctic reaches, from Alaska to Greenland.

Dogs first arrived on the continent with humans around 10,000 years ago, and the new study found that when Inuit culture took root in Alaska around 2,000 years ago, the Inuit people did not simply adopt local strays—they brought their own dogs with them across the Bering Strait. The lineage of these hearty dogs lives on in the sled-pulling breeds in Greenland.

“It wasn’t like you arrive in this new world and just pick up new dogs,” says Carly Ameen, an archaeologist at the University of Exeter and lead author of the study. “You arrive as Inuit in Alaska with a specific toolkit that allows you to survive in the Arctic: kayaks, umiaks for sea mammal hunting, harpoon points—they also included dogs.”

Ameen’s team—actually three teams of archaeologists, paleogeneticists, zoologists, and more—examined the skulls and genetics of nearly 1,000 ancient and modern dogs and wolves. Looking into the canine past can prove difficult, as the later arrival of Europeans—with dogs of their own—largely erased the earlier dog populations from the genetic map.

To collect their study subjects, both dead and alive, researchers looked to the United States, Russia, Sweden, and Denmark. They also visited sled dogs in Greenland, the last remaining direct descendants of pre-European dog populations in North America. “We took ‘origins of dog domestication’ to mean any dog we could get our hands on,” says Ameen. Ancient samples from museums were supplemented with the archaeological record, because the institutions don’t always keep enough material for a full analysis.

“Not many museums keep postcranial material. They’ll keep the skulls,” says Ameen. “In the early 20th century, they took the things that looked pretty, that had this ‘wow’ factor. So we can’t directly say based on the material we studied that these dogs were one hundred percent sled dogs, but we can say they were different from the earlier dogs.”

The researchers found that the Inuit dogs more closely resembled wolves than did the shorter-faced dogs that were already present in North America. As the Inuit spread from Alaska to Greenland about 1,000 years ago, the dogs were likely critical, pulling sleds to aid the long-distance migration.

“Dogs weren’t just this replaceable feature,” Ameen says. “They were a necessary tool, and [the Inuit] moved all the way to Greenland with them.”

Of particular interest to researchers were the modern Greenland sled dogs, which face an uncertain future as snowmobiles take their jobs, various canine diseases exact a toll, and both traditions and climate change.

In France, a Bloody WWI Battlefield Has Become a Wildlife Refuge

The limestone cliffs harbor hundreds of passages that offer glimpses into the distant past.
pet cemeteries

Perhaps, but humans all over the world, from Siberia to Illinois, have a long history of burying animals with respect.
animals

With proper training, dogs can follow their noses to human and animal remains from bygone centuries.
science

Understanding How Bison Might Help Shape the Future of the Badlands

3:38
Want to see fewer ads? Become a Member.
From Around the Web
Atlas Obscura Trips
Greenland and Wild Labrador: Expedition Cruise
View This Trip
Thanks for sharing!