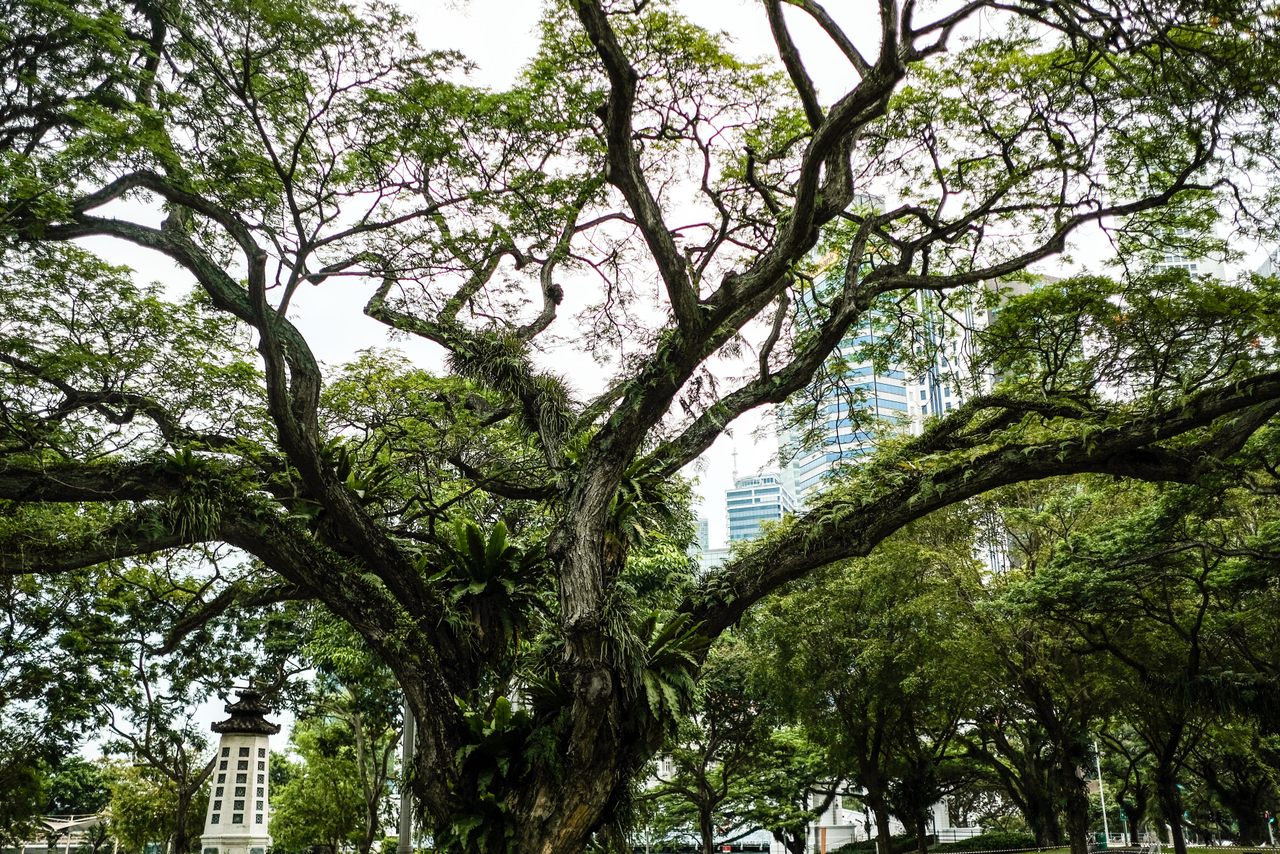 On a sunny Monday morning in May, veteran arborist Eric Ong makes his rounds across the island of Singapore. Lean and tanned from years under the sun, Ong drives toward the city center. Along the way, before he’s even out of the car, Ong studies the canopies of green between the towers crowding out the sky in the city’s central business district, dominated by cool blue and gleaming grey.

Ong is a custodian of the island’s trees, and his job is to check up on them. His first destination of the day is Connaught Drive, a wide avenue flanked by dignified rain trees (Samanea saman), some topping 150 years old. “The big rain trees you see today were the pioneers of their time,” says Ong, his figure tiny next to a regal-looking rain tree. One of the most common streetside trees in Singapore, it’s easily identifiable by its large, umbrella-shaped crown, which offers a reprieve from Singapore’s unforgiving sun. Ferns, orchids, and other plants thrive on the sprawling branches and fissured trunk.

Arborists like Ong are also entrusted with the responsibility of looking after Singapore’s heritage trees, ones conserved for their social, historical, cultural, or aesthetic value. These range from the Burmese banyan (Ficus kurzii) to the towering tembusu (Fagraea fragrans) and the saga tree (Adenanthera pavonina), with its bright red seeds. The mature rain trees—Ong’s favorites—are aged sentinels that witnessed Singapore’s historic milestones, including independence from Malaysia in 1965 and the first National Day Parade the following year.

With joggers running along the nearby Singapore River and the glitzy Marina Bay Sands resort looming in the distance, Ong begins with a 360-degree visual inspection. He scrutinizes the tree’s crown and branches to see whether weak or overgrown limbs ought to come down before they’re hit by monsoons or splintered by heavy winds. He examines the tree for signs of die-back, fungal infection, and cavities, an indention or hole found in the dead tissue that follows an injury. (A cavity isn’t necessarily bad—trees can “compartmentalize the decay by blocking it off inside,” Ong says—but deep ones can compromise the structural integrity and make a tree unsafe for passersby.)

Much as a doctor performs a physical on a human patient, Ong records the tree’s vital signs, such as its girth and height, on an electronic tablet, where he can also access a database of the tree’s history and past inspections. To look more closely for signs of decay, he sometimes drills into the trunk or uses a type of ultrasound for trees. By striking the trunk with a mallet, arborists can track how sound waves travel through the trunk. If they meander slowly, it could mean there are cavities inside.

The examination takes about 15 minutes—but that’s just one tree. In a month, Ong needs to inspect between 500 and 1,000, and crews are especially busy just before monsoon seasons. The Northeast monsoon season lasts from December to March, and the Southwest monsoon season spans June to September. Both are marked by severe thunderstorms, gusty winds, and flash floods—and can easily topple trees.

“Monsoon seasons are nothing to worry about… provided that we do our homework well,” said Ong, 39, who has spent 13 years at the National Parks Board (NParks). To brace for impending storms, Ong is on high alert in especially “sensitive areas,” including places with heavy traffic or throngs of pedestrians. One example is the busy Orchard Road shopping district or the East Coast Parkway highway, which links the international airport to the city center and is lined with majestic trees and colorful tropical shrubs. There, a precarious tree would be a big liability.

In recent years, NParks has also been using new technologies to manage urban trees more efficiently and at a larger scale. Small drones come in handy for quick aerial inspections to examine hard-to-reach nooks and crannies, and NParks incorporated lidar technology, which uses lasers to generate 3D models of trees. Using a software called Remote Tree Measurement System (RTMS), the organization simulates stress tests to understand how trees hold up in wind speeds of up to 50 miles an hour. By knowing the trees’ likely weak points, NParks is able to target pruning efforts.

Some trees are known to be especially vulnerable in storms. The African mahogany tree (Khaya nyasica), an introduced species and one of the largest roadside trees in Singapore, has shallow roots and is heavy and dense, which makes it prone to falling down when a wind pushes. The African tulip tree (Spathodea campanulata) is similarly likely to uproot, while matchstick trees (Paraserianthes falcataria) can struggle because of their soft, brittle wood. Arborists sometimes swap these species for shorter, hardier alternatives such as the native pink mempat (Cratoxylum formosum) and trumpet tree (Tabebuia rosea), which are better equipped to withstand the tropical climate.

Risk-management interventions have decreased tree falling incidents by 85 percent, from some 3,000 cases in 2001 to about 340 cases in 2020. “Some will say we are tree huggers, but we are not,” Ong says. “We are tree doctors … We look after trees in an urban environment. If you hug every tree, there’s no way you can move forward.”

Ong wears the informal title of “tree guardian” with pride. It’s a role that is slowly gaining more recognition, and may be more important than ever.

Singapore is home to some seven million trees. NParks manages six million of them, in roads, streets, fields, and parks. The city-state has become a lot greener since the 1960s, when the founding Prime Minister Lee Kuan Yew introduced the “Garden City” vision. By 2030, the country will be home to at least one million more leafy residents.

The work of tending to all of these trees currently falls to over 630 arborists accredited with the International Society of Arboriculture (ISA), a third of whom are employed by NParks.

As Singapore is home to more and more trees, it’s also seeing increased development. In the land-scarce city-state, arborists respond to the uneasy compromise between the rapid pace of urbanization and the need to preserve green spaces.

Arborists are sometimes peace brokers between people and plants, says Ong, who sometimes fields complaints about trees that shed leaves or are home to pooping birds. And a lot of the crew’s work involves protecting trees amid construction. Advance planning is key, Ong says as he strides briskly around the historic Civic District. During large road construction projects, they’ve had to make sure that eight mature rain trees could be conserved. This has involved wrangling trees with root balls measuring nearly 20 feet in diameter and weighing over 70 tons. To salvage the trees, a team of arborists dug them up, applied growth stimulants to encourage root development, and pruned them to help minimize transplant shock.

There’s a growing awareness of the curious complexities of an arborist’s job. To inject new blood into the sector, fellow NParks arborist Tan Chin Peng has been training students at the Institute of Technical Education and sharing about the industry job prospects. Some students on apprenticeships even manage certain stretches of Bedok Town Park in eastern Singapore and conduct their own tree inspections. “Nowadays, the young people are very enthusiastic and interested in this industry. It’s inspiring to see that,” Tan says.

Ong believes that a good arborist must be conscientious, observant, and scientifically savvy, with a background in urban forestry and ability to wrestle with jargon-filled journal articles. It also helps to be physically fit: Most arborists get around by public transport or on foot, jokingly known as “Bus 11,” though younger ones sometimes ride kick scooters. Ong says arborists should also be flexible and open-minded, and possess “the ability to feel calm and composed in nature.”

There’s a wistful glint in his eye as he recalls gathering with several other arborists—all certified tree climbers—at the verdant grounds of the Singapore Botanic Gardens to practice their skills. These weekly meetups, which are paused for the pandemic, involved contending with fire ants, wasps, and heights. The ritual offered a sanctuary for the public servants to reflect on their work, and how people relate to landscapes. “We need trees,” Ong says, mulling quietly to himself. And the dream is that Singapore will soon have more trees—and arborists—than ever.

Found: A Landlocked Message in a Bottle in a Detroit Train Station

Hackney has a more diverse population of trees than any borough in London.
forests

An incident with a slingshot led scientists to a greater understanding of the relationship between the insects and their host trees.
science

The majestic African baobab has seen several growth spurts over its 1,200 or so years.
forests