Shake Up Your Cocktails with Miso and MSG - Gastro Obscura
Want to see fewer ads? Become a Member. 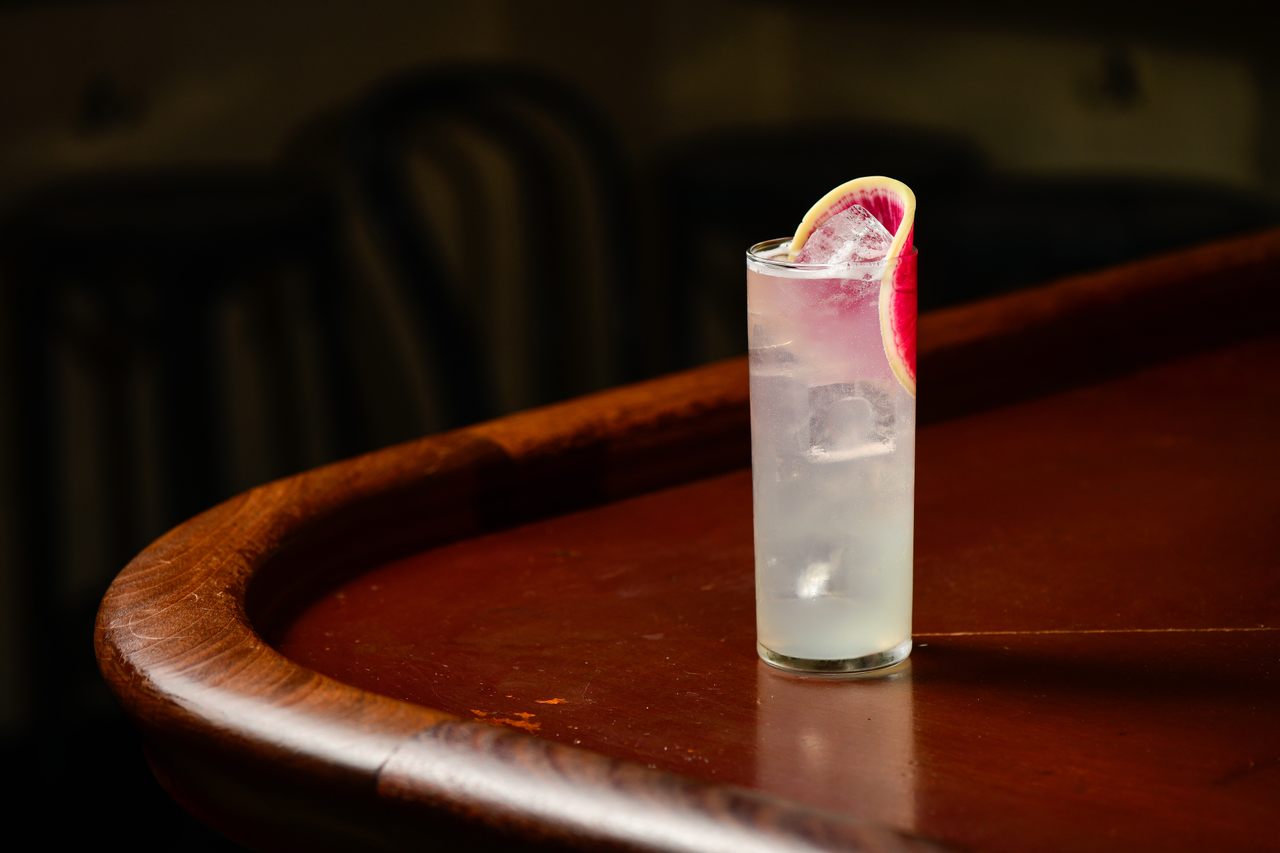 The Vanna White, a vodka highball with akvavit and celery shrub. Courtesy of Grand Army Bar
In This Story
Destination Guide

THIS ARTICLE IS ADAPTED FROM THE NOVEMBER 5, 2022, EDITION OF GASTRO OBSCURA’S FAVORITE THINGS NEWSLETTER. YOU CAN SIGN UP HERE.

A couple of weeks ago, I was at Wiggle Room, a cocktail bar in New York’s East Village, when the contents of my glass stopped me mid-sip. The drink, called a Slam Dunk Disco, tasted like a white negroni on a tropical vacation. There were hints of banana and apricot—but then there was also a note of something funky in the baseline that was hard to place.

It wasn’t what I expected.

“Whenever I’ve smelled white miso, there’s always a funky, almost overripe banana-tropical fruit vibe to it,” says Will Krepop, Beverage Director at Wiggle Room. “I thought it would just be a really cool accent and just add a really salty, savory vibe that makes you turn your head a little bit.”

Wiggle Room isn’t the only place where umami-loaded ingredients have been turning up in drinks. Mister Paradise, the bar’s older East Village sibling, famously put fermented habanero and garlic in a cocktail called the Party Lobster. Apothecary, in Dallas, mixes up everything from a Truffle Shuffle, with white truffle-washed scotch, to a Thai soup-inspired Tom Kha-llins, made with galangal, lemongrass-makrut lime gin, and fish sauce.

Finally, perhaps no drink in the last year has made quite as much of a splash as the MSG Martini, a signature of Bonnie’s, a Cantonese-American restaurant that’s still one of the hardest reservations to score in Brooklyn. As advertised, creator Channing Centeno took a gin dirty martini one step further by adding a healthy dash of monosodium glutamate to the requisite olive brine. One of my dining companions described it as, “Like a bowl of soup, but in a good way.”

In the book Imbibe!: From Absinthe Cocktail to Whiskey Smash, a Salute in Stories and Drinks to “Professor” Jerry Thomas, Pioneer of the American Bar, author David Wondrich notes that the word “cocktail” once meant something very specific. When it first entered the English language in the 19th century, it “denoted something far more specific: spirits or wine, sweetened with sugar, diluted (if necessary) with water, and spiced with a few dashes of bitters—that is, a medicinal infusion of bitter roots, herbs, barks and spices.”

From those rather rudimentary beginnings, bartenders have taken matters in wildly inventive directions, often using ingredients straight out of Gastro Obscura’s database like marsh samphire or black garlic. And while for a long time, most cocktails relied on a sweet, sour, or strong flavor profile, some of the most interesting out there nowadays are going in a decidedly savory direction.

“Drinks like the MSG Martini are introducing the general public to how savory ingredients work in a cocktail outside of a Bloody Mary,” Krepop says. As someone who will happily eat pickles or olives by the jarful, I couldn’t be happier about this. This newsletter is all about how to balance savory, salty, and sharp flavors in a drink. Once you get the hang of that, it’s a snap to execute at home.

Add a Pinch of Salt

“I put salt in everything. Salt, first and foremost, helps curb a lot of bitter flavors,” Krepop says. “If you think of a flavor being like a square, it rounds those corners.”

When executed correctly, adding salt won’t actually make a cocktail taste salty; it’ll just give it a savory edge that makes the other flavors pop. “That little pinch of salt just brings it to life. You’ll notice the difference, but you won’t be able to put your finger on it,” says Krepop. It’s also an easy trick for amateaur bartenders to do at home. Simply combine 10 to 20 percent salt by weight with water, then use an eye-dropper to measure out dashes into your drinks.

Look to the Kitchen

“I’ve done some crazy shit,” says Ally Marrone, beverage director at Grand Army Bar in New York, with a laugh. While working at Blacktail, a Cuban-inspired bar, she created a highball spin on a Michelada with a decidedly gastronomic twist. “I literally made a sofrito-infused mezcal—peppers, onions, a little bit of garlic, and tomato,” she says. “It was so delicious.”

Christine Wiseman, Beverage Director at Bar Lab, says, “I started my career as a chef before I even went into bartending, so incorporating those culinary techniques into cocktails just made sense.” At Broken Shaker in Los Angeles, she invented the now-classic Trash-Tini, effectively a gin-vodka dirty martini with celery shrub, sherry vinegar, and charred onion-infused vermouth. “Quite literally the charred onions were the only thing leftover in the kitchen that they weren’t repurposing in some way,” she says.

Pickles Are Your Friend

“I love using preserved things, like a preserved lemon or a preserved plum,” Wiseman says. “Just a tiny bit adds so much umami awesomeness.”

Combining pickles and booze is nothing new—throughout Russia and most of Eastern Europe, the former is thought to ward off some of the ill after-effects of the latter. According to Imbibe, the 1914 edition of the Rawling’s Book of Mixed Drinks advises bartenders to garnish their Gibsons with a “hazelnut [presumably pickled]” or a pickled onion.

By the turn of the 20th century, Wondrich writes, plopping an olive in a martini was fairly standard, but there’s no reason to stop there. “At one of our new places down in Miami, I have a pickled sea bean, so you get that little bite of acidity, but with this dirty martini vibe,” Wiseman says. “At another martini service, I added pickled radish, which brings a little bit of bittersweet, bright notes to it.”

Marrone makes tinctures—neutral, high-proof spirit infusions—with everything from chiles to rosemary. “You just need a dash in a cocktail and it allows this super-bright vegetal flavor to come through,” she says. Celery tincture, plus a dash of saline solution, is what gives Grand Army Bar’s Vanna White highball its distinctive flavor. “It’s different forms of savory coming together to make a super refreshing take on a Vodka Collins.”

While the Vanna White is overtly savory, Marrone still uses the same technique for other cocktails that walk the flavor profile line. “We just always use savory elements either to help balance the cocktail or if that’s the actual goal of the drink,” she says. That includes adding habanero tincture and makrut lime leaf distillate to a pineapple-coconut number called Potent Potables. “It gives the drink a kind of coconut curry vibe,” Marrone says.

Wiseman, meanwhile, is a fan of incorporating those botanical notes a different way, via her own infused, sweet-and-sour concoctions. “Honestly, one of my things are shrubs, which are equal parts vinegar, sugar and water,” she says. “You can split the vinegars in different ways or use different types of sweeteners, like honey, or maybe you use coconut water as the water element.”

For a few years in the aughts, it seemed like fat-washed cocktails with everything from straight lard to movie theater popcorn butter were inescapable. While bartenders nowadays tend to be a little bit more restrained in how they use it, the technique is still a terrific way to add depth to a savory cocktail.

“It really accents the drink in the way a seasoning does, in the way fresh cracked pepper on top of a cacio e pepe does,” says Krepop, who uses fat-washing to incorporate toasted sesame oil in a drink called Hot Lava, a riff on a spicy margarita. “I feel that it really brings all the flavors together.”

In essence, fat-washing allows alcohol to strip out some of the oil-soluble flavor compounds in anything from duck fat to olive oil. And while it sounds intimidatingly science-y, it’s surprisingly easy to do at home.

“Say you want to do an olive oil gin, you’d combine your gin with 20 percent olive oil by weight,” Krepop says. For maximum flavor, use a wide vessel to get the most surface contact between the gin and the oil.

Allow the mixture to sit overnight, then pop it in the freezer and scrape off and discard the solidified olive oil. What’s left is a highly aromatic, savory gin with notes of extra virgin olive oil. It won’t be fatty, per se, but gives the spirit a richer mouthfeel.

“It’s one of those things that seems hard and daunting and once you know how to do it, it’s really easy,” Krepop says. “Don’t be afraid to do it at home.”

In Ukraine, Bat Rescue Efforts Continue Amid War and Destruction

Once places of refuge, these Anglo-Indian bars are now institutions.
military history

Upgrade your punch game with a 400-year-old science trick.
Video • Wonder From Home

The inventor of the Coney Island hot dog rests in a grand mausoleum in Brooklyn.
Brooklyn, New York

This family-owned bakery is one of the last places in Brooklyn to sell the Nation of Islam–inspired bean pie.
Brooklyn, New York

A B.Y.O.B. Mexican cantina lives inside one of the last tortilla factories in Brooklyn.
Want to see fewer ads? Become a Member.
From Around the Web
THE GASTRO OBSCURA BOOK
Taste the World!
An eye-opening journey through the history, culture, and places of the culinary world. Order Now