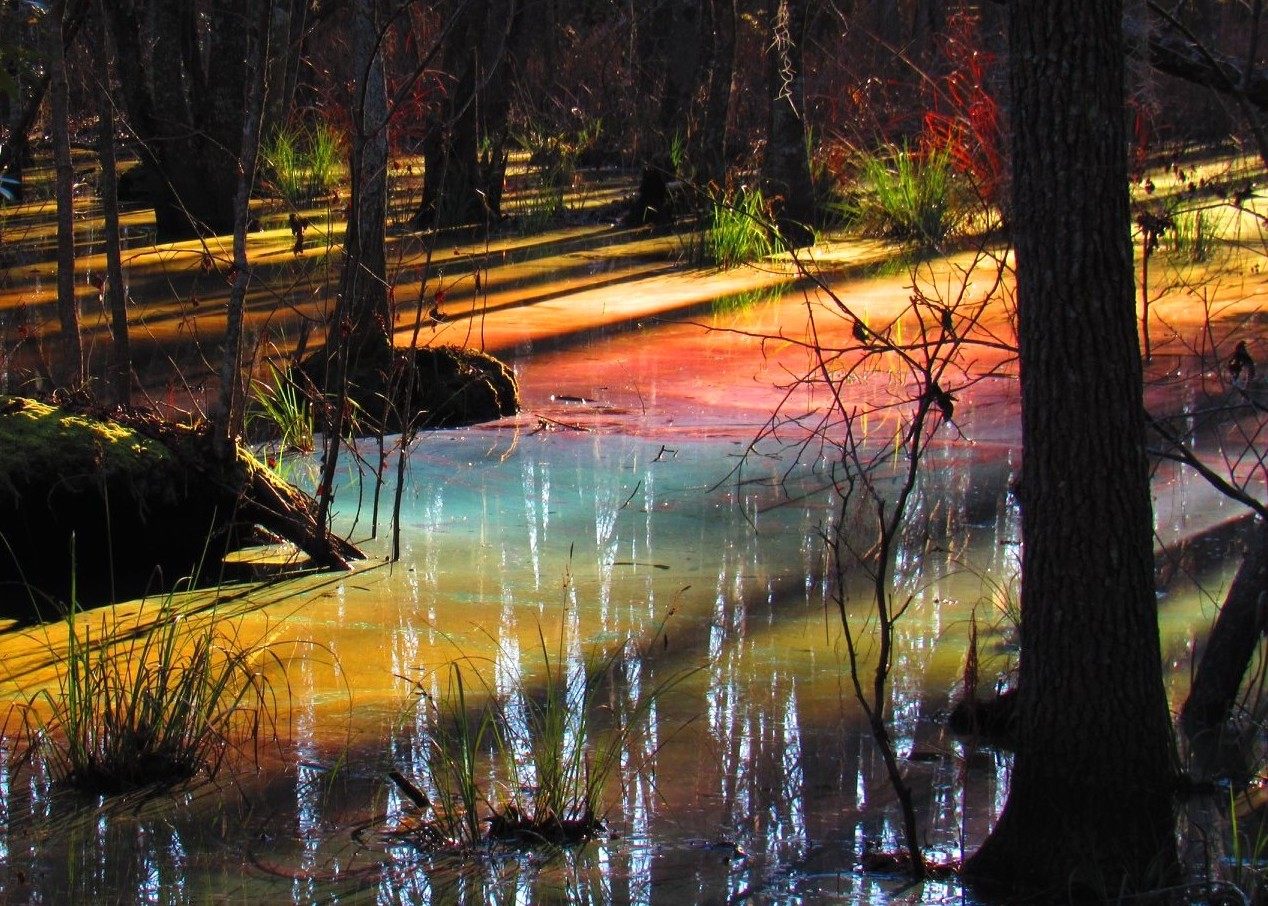 With its sometimes-swampy landscape stippled with soaring cypresses, Congaree National Park in central South Carolina looks like a prehistoric diorama. And occasionally it also resembles a Lisa Frank folder come to life. When conditions are right, standing water appears orangey, blue, and pinky-red—hues usually reserved for garish school supplies or swirls of melted sherbert on a hot day.

The sheen comes from oil, but isn’t the product of a spill or other industrial mess-up. Rather, the “oil-slick sheen” comes from Taxodium—the genus of water-loving conifers in the cypress family—which produce massive quantities of resin and oils, says Az Klymiuk, collections manager of paleobotany at the Field Museum in Chicago. The iridescence comes from oils freed up through decay, they say, that then float and coat the surface.

Dave Stahle, a geoscientist at the University of Arkansas who studies cypresses, suspects that both bald cypresses and their cousins, pond cypresses, could contribute to a colorful effect like this. And since cypresses aren’t the only oily trees around, they might not be alone in flinging a rainbow across the water. “I believe that other conifers might be able to cause similar effects in other ecosystems,” Stahle adds. “Just a hunch.”

At Congaree, the rainbow only dazzles when several conditions cooperate. Light must rake just so, according to the U.S. Department of the Interior. The colors are easiest to spot when the trees’ shadows creep across the water. The hues are also most likely to appear following a spate of dry days, because raindrops pummel the surface and stir up the water. “Mixing would perturb the effect,” says Stahle.

Days of calm weather are also key for developing anoxic zones, says Klymiuk. Certain bacteria thrive in extreme environments, such as where oxygen is scarce or temperatures are high—just look at the thermophilic residents of Yellowstone National Park, which paint the landscape vivid colors.

At Congaree, “I would venture that these rainbow patterns result mostly from differential distribution of metal ions,” Klymiuk says. That distribution of metal ions depends on the hydrology of the system and the sediments in it: In a relatively small area like this one, they say, the colors are driven by whether the water and the sediments beneath it are oxygenated, how much carbon is available, and what else is keeping bacteria busy. The reddish splotches, for instance, are likely evidence of iron-oxidizing bacteria, Klymiuk adds.

If you’re lucky enough to chance upon the tapestry of colors, take care to not disturb them—and, obviously, don’t try to slurp them up.

Scientists have found bacteria that like gobbling up a common toxic chemical.
forests

High in the branches of the Pacific Northwest, entire ecosystems know nothing of the ground below.
islands

Researchers are now focused on the coconut palms, to make the atoll more friendly to seabirds.
science

The ancient resin, used for everything from aromatherapy to Catholic ceremonies, is being overtapped.
Video