The Many Lives and Fiery Deaths of the Silver Lake Sea Serpent - Atlas Obscura
Want to see fewer ads? Become a Member. 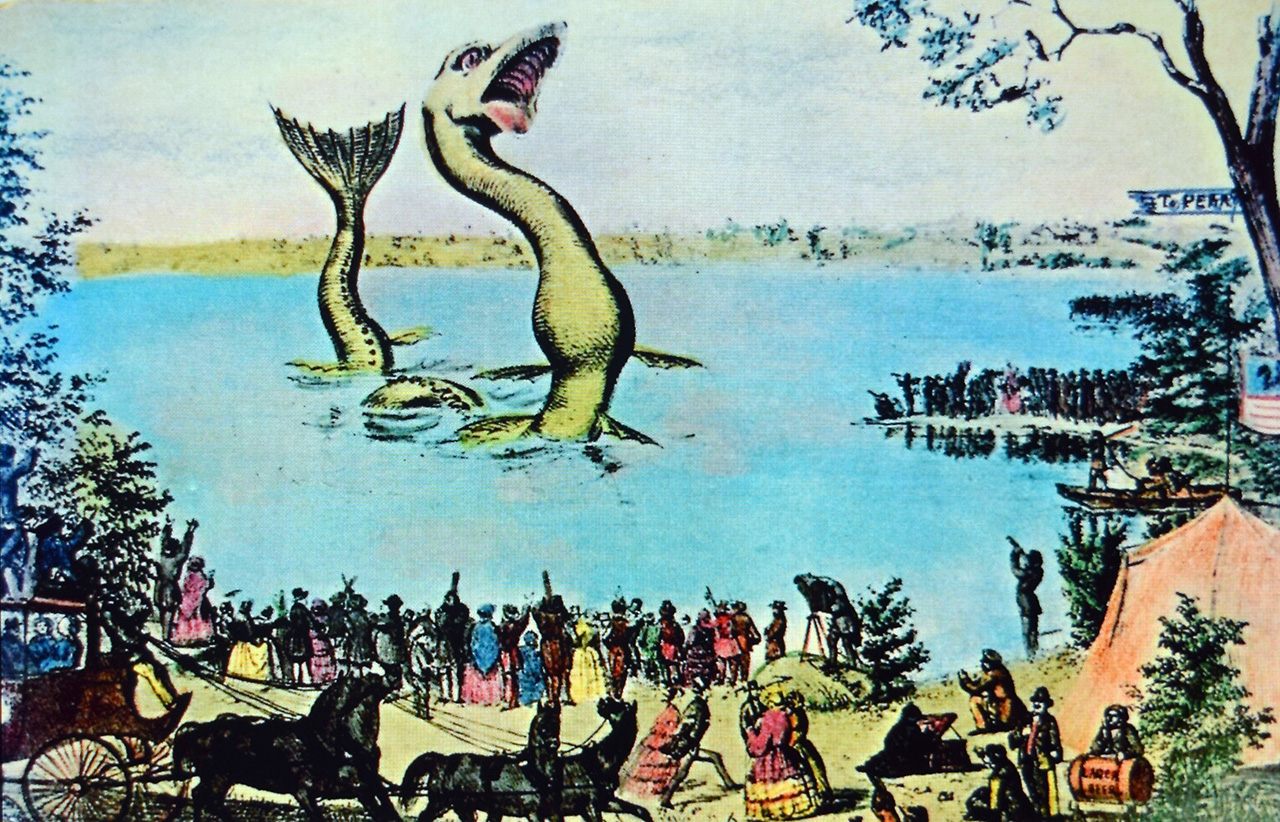 The chance to see Silver Lake's sea serpent brought the small town of Perry a much-needed boost in tourism back in the mid-19th century. Courtesy Bob Murphy
In This Story
Destination Guide

In the summer of 2020 in the small western New York town of Perry, the serpent returned. It moved along the shore of Silver Lake, long as a football field some onlookers reckoned, fangs bared. Its eyes were flecked with gold, a hint of its previous deaths by fire, and of the future that awaited it. Residents gathered unafraid to watch it pass. This was, after all, the Silver Lake Serpent, arguably Perry’s most famous resident.

In its most recent incarnation, the creature also known as the Sea Serpent—despite Wyoming County being a few hundred miles from any ocean—was a colorful, ribbon-bedecked puppet, a collaboration by 50 local artists for a socially-distant Sea Serpent Parade. But talk of lake monsters, legendary and otherwise, has been a part of the region for centuries.

According to Seneca lore that predated the arrival of Europeans, the lake was home to a slug-like creature. “Any unnecessary or unnatural noise over the water could cause [it] to rise up and pull anyone to their doom,” wrote local historian Bob Murphy in his comic book retelling of the Native American legend. That version of the Silver Lake creature met its end, according to the story, after a thunderstorm drew it from the lake.

Eventually, however, the sea serpent reared its head once more. In July 1855, the local newspaper Wyoming Times reported that four men and two boys were fishing on the lake when a large creature with a distinct head and tail surfaced. More sightings followed. Word spread and soon visitors flocked to the town. The Walker Hotel and other local establishments filled up, even outside the summer tourist season. Locals built watchtowers and organized search parties as the sea serpent sightings garnered national attention.

Perry’s newest tourist attraction went up in smoke just two years later, however. The Walker Hotel burned down in 1857, and what looked like the remnants of a mechanical monster were found in the charred debris. It was a letdown for tourists and locals alike.

“The people believed it was real. They even hired a company with harpoons to come and catch it,” says Norma Spencer, Perry’s official town historian, adding that one of the monster-catching harpoons used—unsuccessfully—can still be seen at the Wyoming Historical Pioneer Association museum.

According to Murphy, Artemis Bernard Walker, who owned the Walker Hotel, had created the monster with canvas, bellows, and air hoses with hopes of drumming up business. Murphy believes it’s probably what the fishing party spotted in 1855. While Walker knew the Seneca legend, he may have also been inspired by his Scottish heritage. Says Murphy: “Every lake there has a monster.”

In the wake of the hoax-exposing fire, Walker’s fate is unknown. The monster he made, however, lives on. A century after his canvas creation met its fiery fate, locals organized the first Silver Lake Sea Serpent festival, which featured parades, float competitions, arts and crafts shows, and the honor of a local being crowned Sea Serpent Queen. Amid the wholesome annual summer celebrations, however, more than one lake monster creation met a mysterious end.

After the 1962 festival, a papier-mâché monster crafted by the Perry Junior Chamber of Commerce, described as “friendly-looking” by the Perry Herald, was stored in a barn. The building burned to the ground. A 40-foot monster made for the 1978 festival suffered the same fate, as did another in 1980.

“Tell someone that if they ever build a sea serpent, not to name it after Silver Lake, or not to store it in a barn,” says Murphy, who has been more successful than Walker and other monster builders at keeping the legend alive.

Murphy has spent years retelling the sea serpent stories, including in a pair of comic books. Whenever Spencer receives a letter from someone asking for more information about the monster, she mails them copies of Murphy’s version with a note on letterhead that, yes, bears the lake monster’s image.

Murphy says that, while researching his books, he found dozens of Perry logos with a lake monster theme. Today, at the Silver Lake Brewing Project, a forked-tongued, hissing creature adorns glasses, coolers, hats, and shirts. If you prefer the friendly-looking version, the local splash pad features a bright green, smiling sea serpent.

Artists throughout Perry have embraced the monster motif, particularly sculptors who have rendered the sea serpent in wood, metal, and other materials as part of permanent public installations. Art and the monster have been intertwined since Walker’s ill-fated creation.

“That was the first instance of puppetry, large-scale theater puppetry, in the town,” says Josh Rice, co-founder and producing artistic director of Shake on the Lake, a regional professional theater company. Rice was part of the effort to bring back the Sea Serpent Parade in 2020, for the first time in decades, with appropriate pandemic-era precautions.

Some things don’t change, however. The football field-long puppet that marched down Perry’s streets met the same fate as its predecessors. Says Rice: “It’s in ashes in the fire pit at my house.”

This time, however, the fiery end to the serpent had special meaning. Prior to the event, Rice and some of the other participants attended a workshop to learn about Seneca culture and history, giving the lake monster stories greater context.

“Knowing these aren’t our stories, as often as we try to own these things, we wanted to learn where these stories came from, meet them where they are, and celebrate them,” Rice says. He adds organizers made the decision to destroy the serpent to burn away any bad energy associated with Walker’s 19th century appropriation of the legend. He adds: “I think, for me personally, it felt like a ritual of release.”

Podcast: The Gates of Hell

The Intrepid Mother and Son Who Unraveled a Geographic Hoax

Atlas Obscura had a page for something called Moose Boulder, until fan Roger Dickey called us on it.
animals

They're actually colonies of many tiny invertebrates. Does that make it better or worse?
lakes

Found, With a Robot: A Loch Ness Monster

A man-made version of Nessie was lost decades ago.
Video • Wonder From Home