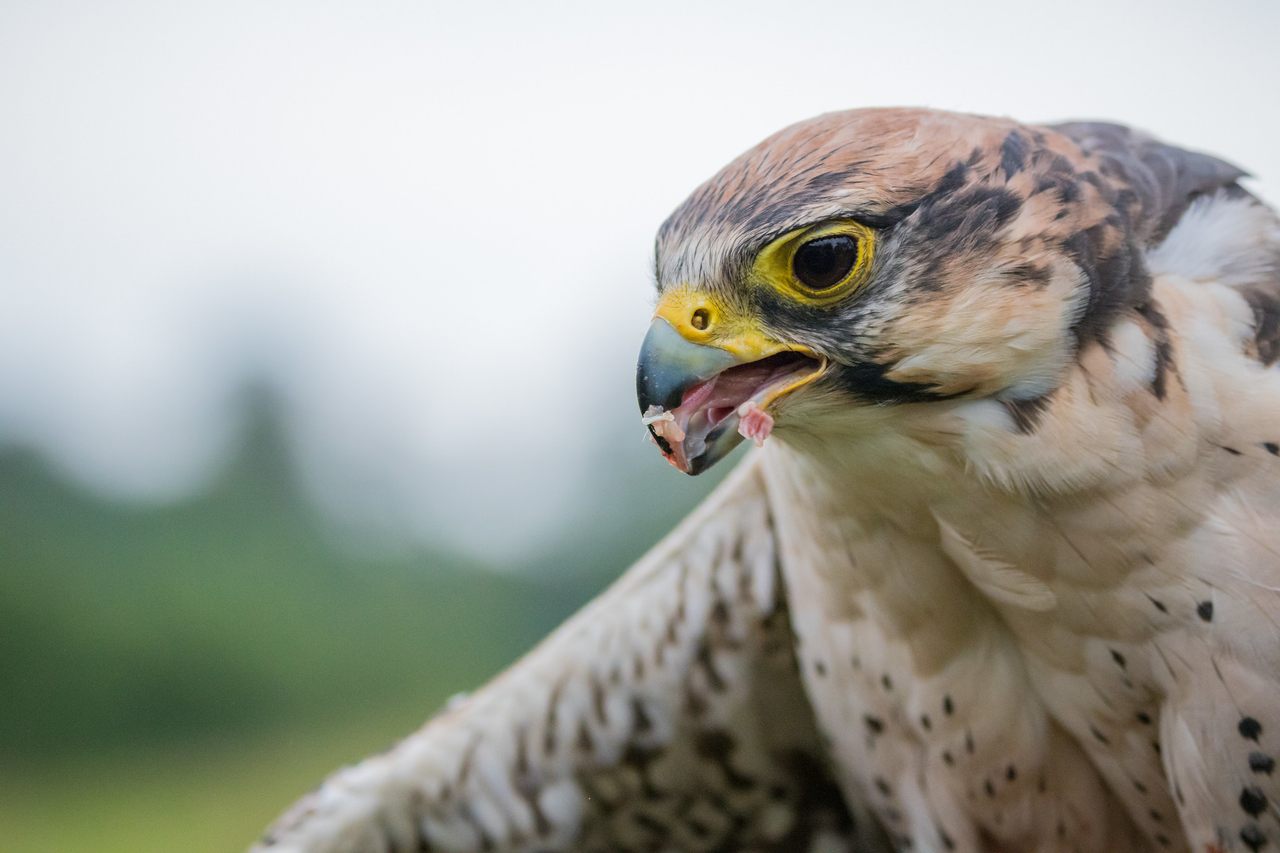 A peregrine falcon who just had lunch. Susanne Nilsson/CC by-sa 2.0
In This Story
Destination Guide

For two years, a rumor flew through Seattle’s small community of raptor enthusiasts: An unusual pair of birds had taken over a Boeing airplane assembly plant. No one was allowed inside the plant, so the rumor remained a rumor. “An occasional birder would say something about it, that they heard thirdhand from a Boeing worker, but we never got any confirmation,” says Ed Deal, the president of the Urban Raptor Conservancy. “Until this summer.”

The birds were a nesting pair of peregrine falcons, which are approximately the size of crows, and are the fastest birds in the world. The Seattle Times reports that the pair apparently lived in the plant for four years, taking refuge in a nest they wedged on top of a metal girder. Deal estimates that it was more than 60 feet off the floor. The birds feasted on pigeons and starlings that would flutter into the hangar, minding their own business, and they left streaks of poop the color of alabaster. “This is a fairly unusual situation,” CJ Nothum, a Boeing spokesperson, writes in an email.

The Boeing factory, located in the Seattle suburb of Renton, is the final assembly point of the Boeing 737 MAX, which was involved in crashes in 2018 and 2019 that killed 346 people. “When the 737 assembly line is in full swing, they’re producing one finished airplane a day,” Deal says. “The doors open at least once a day for a plane to go out, letting the birds come in.” The plant shut down indefinitely in January, according to The Seattle Times, which means its doors will open far less often than usual, Deal says.

Though the plant’s daily exhalation welcomed the falcons, it also invited in a host of other birds, such as pigeons, gulls, and starlings. These smaller, gentler birds are frequent occupants of airport terminals and hangars, as the rafters offer a spot to roost that’s often free from predators, according to the company BirdBarrier.com, whose website has three main sections: “About Birds,” “Where They Perch,” and “How to Stop Them.”

The trouble started in June of 2019, when the falcons had chicks. The tiny peregrine falcons leaped from the nest in early, decidedly unsuccessful attempts at flying. “They very often leave the nest too soon,” Deal says.

Wild chicks often make the leap from a cliff ledge, Deal says. “On a natural cliff, there are thermal updrafts that can help a poor flier gain elevation,” he explains. “But in a place like an airplane hangar, they just land on the floor.” The lucky chicks, unable to get back to the nest, would wander around the factory floor. The unluckiest chicks fractured bones, and were whisked away to a local rehabilitation facility.

Finally, Boeing invited Deal to take a look. He toured the assembly plant twice, once in the summer of 2019 and again in January 2020. “It was quite the intricate assembly line,” he says. The workers he met didn’t seem to mind the birds’ presence—some even welcomed the diversion—except when they pooped, or dropped their leftovers. “Pigeon heads,” Deal says. “They’ll take the whole head off while they’re eating and drop the body parts and feathers.” The falcons would often eat at the same time as the factory workers, meaning that falling scraps would sometimes interrupt an otherwise pleasant lunch. “They didn’t really care for it,” Deal says of the Boeing employees. Boeing hired a service to clean up what Nothum calls “bird debris.”

If Boeing gets clearance from the Federal Aviation Administration to fly the 737 MAX again, assembly on the planes likely wouldn’t start back up for five or six months, a supply-chain expert told The Seattle Times. In the meantime, Boeing, the Urban Raptor Conservancy, and the Washington Department of Fish and Wildlife, and the U.S. Department of Agriculture have hatched a plan to relocate the falcons. “We’re trying to put some nest boxes outside the building, on the roof,” Deal says. “The shutdown for Boeing could be a blessing in disguise.” He says the falcons will eventually grow hungry and will have to leave the hangar to hunt, and hopefully find a new nest before they start their spring courtship. “We’re just waiting to hear back from Boeing,” Deal says. “They’ve got bigger fish to fry.”

The Rude, Cruel, and Insulting 'Vinegar Valentines' of the Victorian Era

New York City's Pigeons, Like You've Never Seen Them Before

They're ready for their close-up.
maps