The Hoax Book That Became an Anarchist and Hippie Bible - Atlas Obscura
Want to see fewer ads? Become a Member. 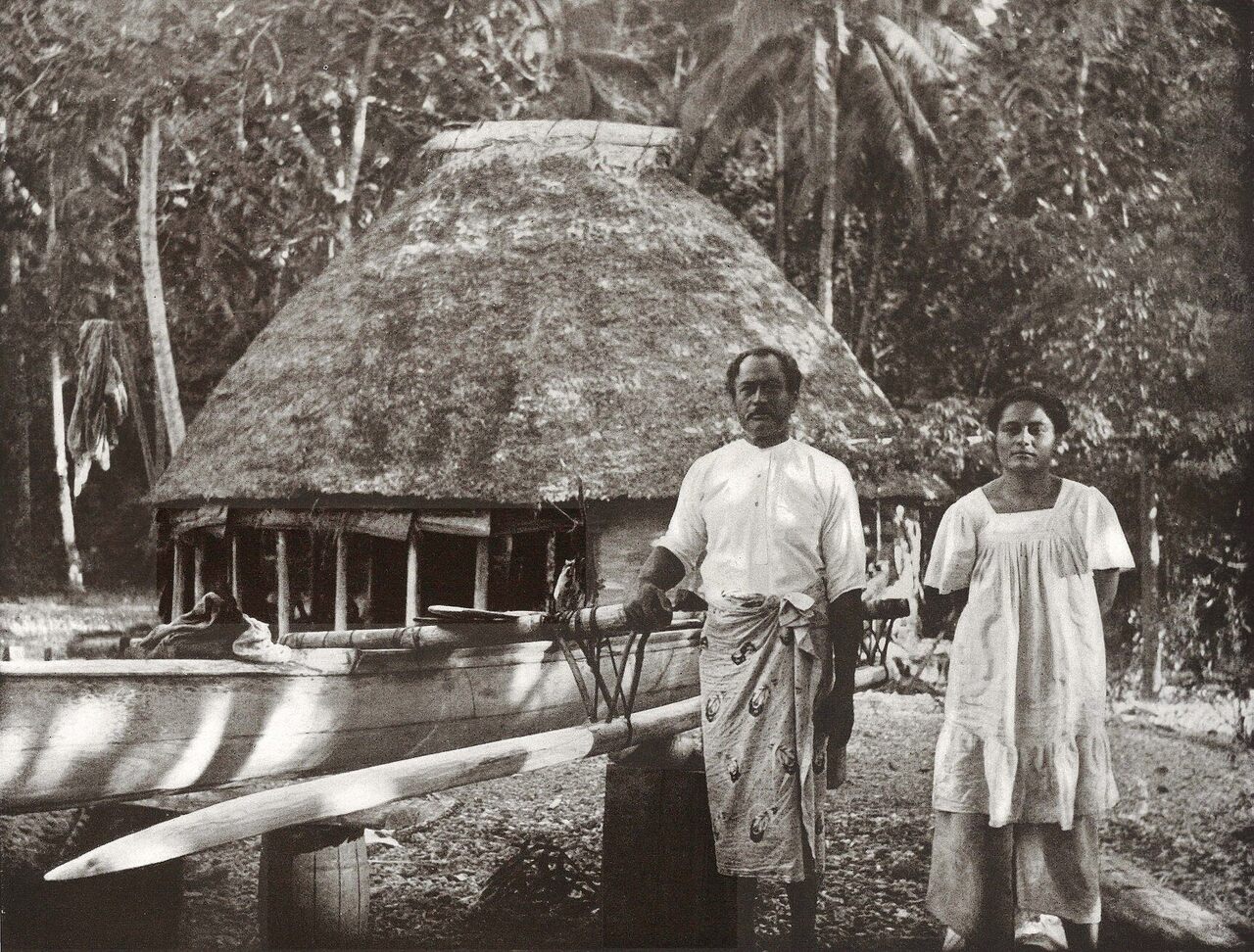 Is this Tuiavii and his wife? Probably not. Courtesy Jessica Rottschäfer
In This Story
Destination Guide

In 1920 a German man named Erich Scheurmann published a strange little book titled The Papalagi. The 117-page travelogue, written as a series of 11 speeches supposedly by a Samoan chief named Tuiavii, described the European way of life in a simple, childlike manner. Tuiavii called shoes a “kind of canoe,” and had names for everything from clothes (“skins”) and houses (“stone boxes”) to newspapers (“machines for thoughts”), cities (“stone islands”), hot water (“sun water”), and doorbells (a “nipple, which has to be pushed until it screams”).

The Papalagi questioned the Western concepts of time and labor, and “the serious sickness of thinking” that “makes people old and ugly in little time.” It aimed its critique at a society whose obsession with money had created social inequalities, abysmal working conditions, pollution, and consumerism.

According to the book’s preface, Tuiavii wrote his speeches after he visited Europe as a member of a performance group. The book was a warning to his fellow Samoans that the papalagi (Samoan for “white man”) wanted to drag them “into his darkness.”

Though Scheurmann’s name figured prominently in The Papalagi, he claimed to be only a translator of Tuiavii’s speeches. He did admit, however, that he had published them without the chief’s approval, hoping they would help Europeans “find out how a man who is still closely bound to nature sees us and our culture.”

The idea of a noble, wise indigenous person commenting on Western civilization was a trope of the time—one that today is recognized as simplistic, insulting, or racist. And there was something about where Tuiavii was said to come from. As Gunter Senft, a linguist at the Max Planck Institute, writes, the idea of natives “imagined to be unspoiled by all negative aspects of European civilization—by its rules, its regulations, its powers, its repressions, and last but not least by its moral standards—seems to be most popular when it deals with peoples from the South Seas.”

In the following years, the book would take on a life of its own, translated and illustrated, a favorite of the counterculture and anarchists alike. The true authorship of the book—which should be clear by now—turns out to have been a manifestation of the very Western, colonialist culture the book was intended to criticize.

Scheurmann was born in Hamburg in 1878. He was an adventurer, a painter, a writer, a puppeteer, and—as one critic put it—“a raconteur of fairy tales, who meddled with psychological fringe areas.” Throughout his life he was a staunch supporter of the so-called Lebensreform (German for “life reform”)—a social movement in late-19th- and early-20th-century Germany and Switzerland that promoted a back-to-nature lifestyle and emphasized organic food, nudism, sexual liberation, and abstinence from drugs, alcohol, and tobacco.

In 1904, Scheurmann met and married his first wife, Susanne. The couple settled down at Lake Constance, on the German-Swiss border. But the premature loss of their three children, all of whom died in infancy, left them devastated. To distract themselves, the Scheurmanns decided to travel to the German colony of Western Samoa, after Erich had secured an advance from a Berlin publisher to write a book about the island country. But Susanne fell ill, so in April 1914, Erich (ironically) headed south alone.

Scheurmann arrived in Samoa in June, on the eve of World War I. Two months later, New Zealand occupied Samoa, and he became a prisoner of war. In October 1915, Scheurmann somehow convinced the military administrator of Samoa, Robert Logan, to give him permission to leave on a gunboat for the United States, where he worked as a journalist and an advertising speaker for the Red Cross. While in America, Scheurmann prepared The Papalagi manuscript. He returned to Germany shortly before the war’s end.

The Papalagi was published in 1920, to mixed reviews. Critics called it everything from “amusing” to “boring” to “silly.” But as the young Weimar Republic struggled with dire postwar poverty and rapid industrialization, the book’s back-to-nature ethos caught on with the public. The book stayed in print for years and was translated into more than 15 languages, including Japanese and Esperanto. Eventually it became a bestseller.

Throughout his life Scheurmann wrote a number of other books—and both joined the Nazi party and espoused Nazi ideology—but none matched the popularity of The Papalagi. He died in 1957, at the age of 78.

As the years passed, The Papalagi was largely forgotten. But it was rediscovered in 1971, when students from Marburg, Germany, published a pirate version of it. In 1975 the Real Free Press—an Amsterdam-based publishing house that ran on money made in the marijuana trade—released the first English edition, with illustrations by legendary Dutch comic artist Joost Swarte.

In 1977, The Papalagi was published in West Germany, and over the next decade was issued in more than 10 editions, becoming a cult favorite. The Papalagi became so popular, in fact, that in 1978 the German newspaper Die Zeit called it a “green Bible.” In 1980 it was even included in German high-school curricula.

Peter Cavelti, author of the 1997 English translation, says the source of its popularity was generational.

“In the 1960s, an entire generation questioned the way things were done,” he says. “We felt disillusioned, and … [o]ut of that disillusionment … came the alternative vision the hippies developed—in retrospect not a realistic way forward, but nevertheless one that recognized the shortcomings of the system into which they were born. Tuiavii’s explanations of how the papalagi’s ways were flawed deeply resonated with many young people during the hippie era.”

There was only one, rather obvious problem: The Papalagi was a hoax.

Though it wasn’t officially debunked until 1987—by a German ethnologist named Horst Cain—some early critics had noted the book’s similarity to another “travelogue” that had claimed, falsely, to be written by an outsider. The Journey of Lukanga Mukara Into the Innermost of Germany, by German explorer Hans Paasche, consisted of nine letters supposedly written by a person from German East Africa (today’s Tanzania, Rwanda, and Burundi) to his fellow countrymen. Scheurmann, who must have been aware of Paasche’s book, not only copied its idea, he covered almost all of the same topics. Unsurprisingly, in the late 1970s he was accused of plagiarism by Paasche’s family.

The character of Tuiavii is probably an invention of Scheurmann’s. In his 1927 illustrated book, Samoa, Scheurmann published a photo of a Samoan couple in front of their house, which he captioned “The chief Tuiavii from Tiavea with his wife.” But the man in the photo hardly fits Tuiavii’s description in The Papalagi. According to Scheurmann’s great-granddaughter Jessica Rottschäffer, who’s working on a doctoral thesis about her ancestor, Tuiavii is most likely a composite character.

“While in Samoa, Scheurmann met the high chief Tupua Tamasese Lealofi I, and some other lower chiefs,” says Rottschäfer. “So Tuiavii seems to be based on a couple of different people.”

But it took Cain, a specialist in Samoan language, to fully crack the code. After carefully analyzing the book’s language, he compared it with the speeches supposedly written by Tuiavii, and found many discrepancies. His conclusion: Scheurmann had written The Papalagi himself, as a veiled commentary on German society.

(It certainly hadn’t been written for a Samoan readership. When Grant McCall, a professor of anthropology at the University of Sydney, held lectures about The Papalagi for Samoans in the late 1990s, his attendees said they “were puzzled” by the book.)

Despite having been debunked as a literary hoax, The Papalagi is still popular today. In the past decade it’s been published in many new languages—Turkish, Catalan, Hungarian, Italian, and Chinese, among others—and inspired at least two spin-offs.

Cavelti thinks that the book’s enduring appeal lies in its message. “There are countless books of lasting literary and historical importance that could be called a ‘hoax,’” he says. “What matters is the book’s message. Is it relevant what liberties Scheurmann took if he managed to introduce a perspective that offered a different lens through which Western society could be viewed?”

Of course, it also matters where that perspective comes from, and what form it takes. The most relevant liberty taken in The Papalagi has less to do with pseudonymous deception than with uninformed cultural appropriation.

“It is high time that we are willing to learn more about the life and culture of other ethnic groups, countries, and nations,” writes Senft. “And we should always be aware of the fact that any form of idealization of the so-called ‘primitive native living an unspoilt life’ is just another form of European colonialism and colonialization.”

Remembering a Daring Escape Beneath the Berlin Wall

Nearly 60 years after he fled East Berlin, Andreas Springer shares a story of risk, freedom, and the deepest tunnel beneath the Cold War's most infamous border.
saints

To Sweep Aside Drinking Regulations, Germans Hang Up Broomsticks

A unique tradition allows winemakers to host and serve customers in their homes.
Video • Object of Intrigue

1:22
Want to see fewer ads? Become a Member.
From Around the Web
Atlas Obscura Trips
Hidden Berlin: Exploring the City’s Abandoned and Underground Spaces
View This Trip
Thanks for sharing!