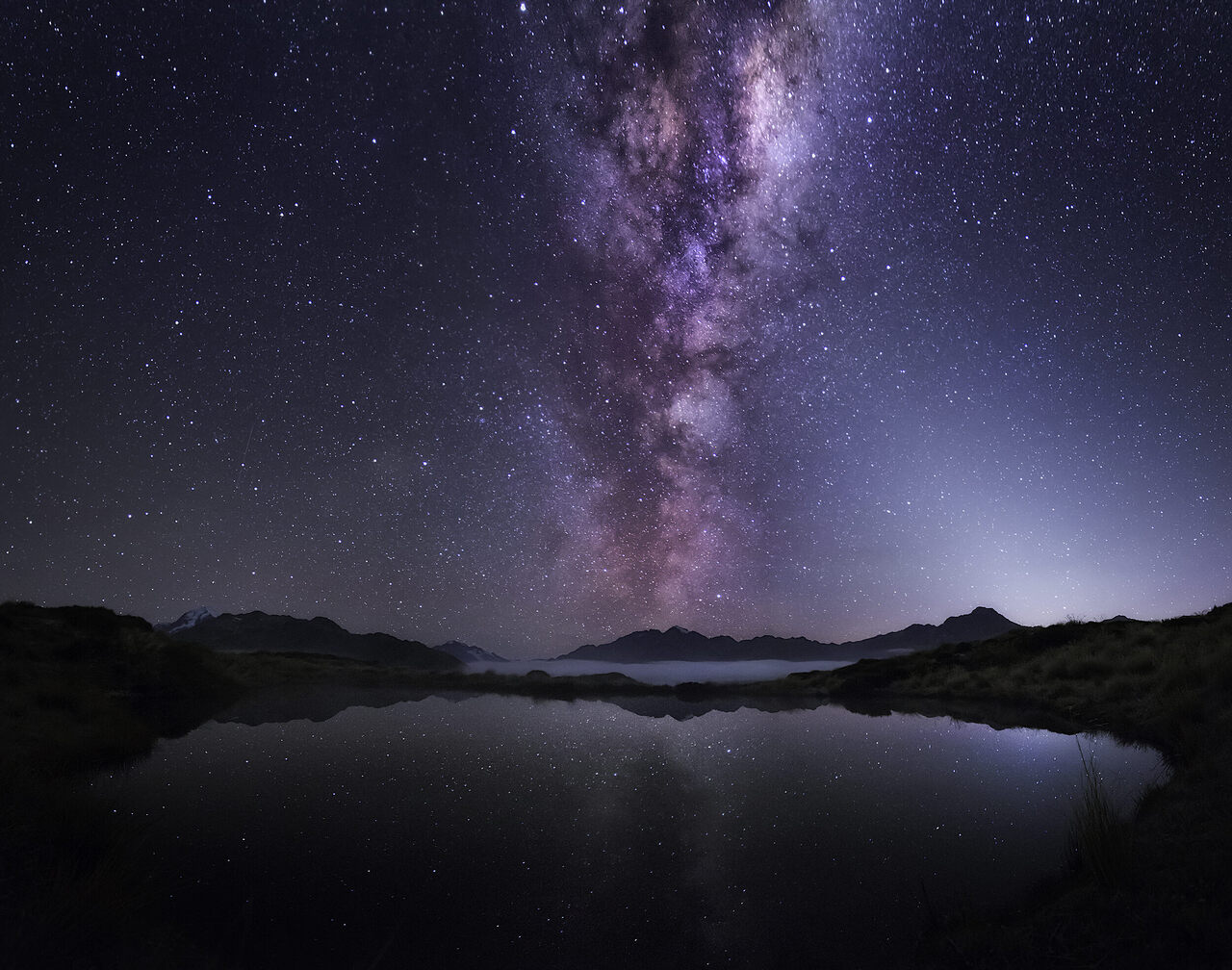 Mike Bacchus remembers the man only as “the Texan.” A few years back, the Texan, well into his 70s, was a guest at New Zealand’s Lakestone Lodge, which Bacchus and his family own. The man had made his way from Texas to the Mackenzie region of New Zealand’s South Island for the landscapes, to see vivid swathes of violet lupins set against blue glacial lakes, and snowy peaks rising beyond golden tussocked hills. He hadn’t realized one of the most glorious sights in Mackenzie is revealed after sunset. In a region with some of the darkest night skies in the world, the vast sweep of the Milky Way dwarfs even the towering summit of nearby Aoraki, or Mount Cook.

One evening, Bacchus invited his guest to step outside. The Texan’s first instinct was to raise his hand. The stars were so vivid it seemed as if he could reach out and clasp them. Standing beneath the great bowl of the heavens, the man bathed in starlight and emotion. He told Bacchus he was seeing the stars clearly for the first time since he was ten years old.

For Bacchus, the Texan’s awe was a reminder of how precious—and elusive—the clear night sky can be. “It really hit home. He had simply forgotten about the Milky Way,” says Bacchus.

Lakestone, an off-the-grid lodge on the edge of brilliantly blue Lake Pukaki, is located within the Aoraki Mackenzie International Dark Sky Reserve. From the lodge, the nearest traffic light is about a 100-mile drive.

The reserve, designated in 2012 and covering more than 1,600 square miles, protects more than just the night sky. It offers a respite from the impacts of light pollution for every living creature within its boundaries, from endangered insects to humans who have forgotten the Milky Way. More than 80 percent of the world’s population lives under light-polluted skies, according to a study in Science Advances. Even three hours away from the reserve in Dunedin, where Māori astronomer Victoria Campbell grew up, the stars are masked.

“It was breathtaking to look up and realize what I wasn’t seeing from my home in the city,” Campbell says of her first view of the reserve’s night sky. She was enthralled. “Our whānau [family] have decided to move to Mackenzie because of our love for the environment, and the pristine night skies.”

Home to just a few thousand people, the Mackenzie Basin has always been a prime spot for stargazing. That is, when it’s not overcast. As astronomer John Hearnshaw observes wryly, Aoraki Mackenzie is “known for its dark skies, not its cloudless skies.” Hearnshaw is a former director of the Mount John Observatory in Tekapo, at the reserve’s center, and played a key role in securing the dark sky designation. He has been advocating for protecting the region’s night skies since the late 1970s. And he’s not done yet.

At his home in Christchurch, Hearnshaw opens a book he authored, The New Zealand Dark Sky Handbook, and flips to a map of the Mackenzie district. He traces his finger along the ridges of the Southern Alps and the thick blue lines of lakes while describing how he and other advocates hope to expand the reserve to neighboring Fairlie Basin, which would roughly double its size. That’s good news for both stargazers and the region’s smallest residents.

The Mackenzie area’s dry tussock is home to moths and other insects found nowhere else on Earth. For example, Izatha psychra is a moth found only in one patch of shrub within the reserve, where it teeters on the edge of extinction. “This moth has a single reasonable population. Well, I say reasonable population; I haven’t seen more than three moths in any given year,” says Robert Hoare, an entomologist at New Zealand’s Manaaki Whenua Landcare Research.

I. psychra is one of several moth species in Mackenzie that has had to contend with a changing habitat, including the threat of light pollution. Before the reserve’s protections were in place, several of the populations crashed. “Fifteen years ago, we had conversations about these species and thought, well, they’re probably okay, the habitat doesn’t seem to have changed much, they’re still there. Then we went back after ten years and the moths just seem to have disappeared,” Hoare says. His concern is palpable. He speaks about certain moth species as if they’re old friends he hasn’t heard from in a long time. One species hasn’t been seen since 2008, yet he still hasn’t stopped searching for it.

Conservation of these delicate creatures is still at an early stage, and focuses on keeping what’s left of their habitats intact. And that means preserving the dark. Light pollution interrupts insects’ natural cycles of feeding, mating, migrating, and navigating. Moths are also attracted to outdoor lighting, which makes them more vulnerable to predation and exhaustion.

“Anything that stops their life histories from being interfered with, that stops them being pulled out of their habitat and fluttering around light is beneficial. It’s good if they have as little extraneous light as possible,” Hoare says.

Now, communities on the reserve’s periphery are getting increasingly involved, including a new Dark Sky Certification program—Lakestone Lodge was the first business in the region to be awarded the designation.

A revitalization of mātauranga Māori, or Māori knowledge, is also changing the way New Zealanders see the natural dark. “Everything is holistic and connected,” says Campbell. “From celestial objects to things in our natural world like plants, the wind, the tide.” She says dark skies aren’t singularly about astronomy, environmental protection, or human health, but all of these things at once.

The reserve’s value will be showcased in June 2022, when Matariki, Māori New Year, will be celebrated as a national holiday for the first time. Matariki is deeply rooted in star lore, signaled by the rising of the Pleiades star cluster. Campbell hopes the event will serve as a potent reminder of the importance of environmental conservation. “Particular stars within the cluster are linked to fresh water and our oceans, for example, so there will be some really beautiful opportunities there for us as a nation to think about those things.”

A self-described optimist, Campbell believes Matariki may inspire new reverence for how all the parts of the world move in sync, from Earth slowly spinning on its axis to the circadian rituals of moths in tussock grass beneath the dark Mackenzie skies.

Team members at the remote desert site brave challenging conditions to make the most of its clear, dark skies.
insects

Why an English Manor Is Deploying Parasitic Wasps and Moth Pheromones

Conservators are trying to protect historic treasures—but it's all more subdued than it sounds.
photography

The Challenges and Delights of Photographing the Night Sky

It can take years to get the perfect shot.
astronomy

11:15
Want to see fewer ads? Become a Member.
From Around the Web
Atlas Obscura Trips
Wings & Wonders: Birds of New Zealand
View This Trip
Thanks for sharing!