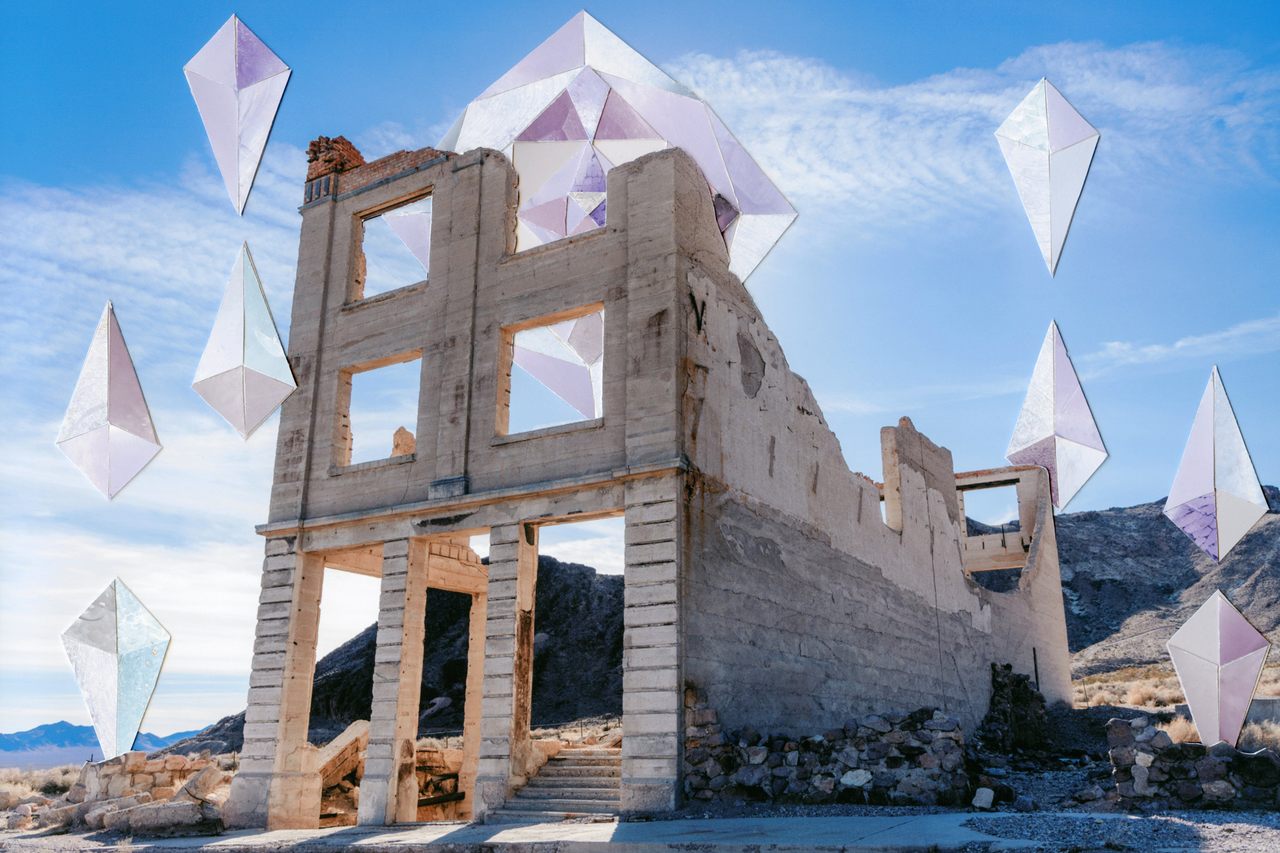 Inside jokes can be like mementos among friends. They can last a lifetime, or, in the case of Francesca Berrini and Lindsey Rickert—the recipients of “The Fellowship of Highway 95”—they can elevate a donkey to mythical status.

The second day of the Fellowship, a week-long artistic journey from Las Vegas to Reno up Nevada’s “Free-Range Art Highway” organized by Atlas Obscura and TravelNevada, began at the Atomic Inn in Beatty with a top-of-the-morning bray. Hearing a suspicious rustle outside of their hotel room, Berrini and Rickert clambered outside to check on their camper van. They were greeted by “a sweet-faced burro from the hills,” as Berrini wrote in her travel journal that evening.

Breaking the golden rule of inside jokes, the two immortalized the donkey in the photo collage above, titled My New Friend, which introduces the unofficial mascot of their trip to the world.

The mysterious purple splotches that lend the image its aged look were the result of an experimental development process. Days after she met the donkey, Rickert dipped a film strip featuring Walker Lake into its own waters and stored the specimen for weeks. The snippets of text appeared in a book purchased the next day in Tonopah. Overall, the piece incorporates elements that span the entire course of the artists’ journey.

Having bonded over their new friend, Berrini and Rickert set forth on the day’s expedition to Rhyolite and the Goldwell Open Air Museum. Exploring the ghost town and the contemporary artworks interspersed throughout, Berrini and Rickert fell into sync as companions and collaborators, ultimately producing two stunning works.

Rickert shot one of Rhyolite’s best-known sites and lightened it to serve as a background to Solarized Rhyolite (pictured at the top of this page). Crumbling but comely and open to explore, the former Cook Bank Building epitomizes the romance of a ruin. Needless to say, it also photographs well—the building was featured in the 1964 film The Reward and again in the 2004 dystopian action-thriller The Island.

Though it appears ancient, the structure was built in 1905. Rich in high-quality iron ore at the turn of the century, Rhyolite struck another type of fortune when Charles M. Schwab took more than a charitable interest in the town. At the height of its boom, up to 5,000 residents were estimated to have lived there.

But cosmopolitan Rhyolite’s resources were already draining by the time the 1906 earthquake in San Francisco splintered the town’s railway access, effectively cutting it off from commerce. Its residents fled, and by 1920, only 14 people lived there. The gems that surround the ruins in Berrini and Rickert’s second photo collage of the day, titled Solarized Rhyolite, reference the bygone majesty of boomtowns.

You won’t find these perfectly cut stones in the sand at Rhyolite, but you’re likely to find another type of treasure. Antique glass exposed to the sun eventually assumes a lavender color. This “solarized” glass is ubiquitous in Nevada (in Rhyolite’s heyday, it was estimated that around 50 saloons operated in the area). The disembodied gemstones in Solarized Rhyolite are themselves each tiny collages assembled from photographs of the glass’s prismatic hues.

Exploring the Goldwell Museum, Berrini writes: “Many of [the artworks] feature an interactive component that depends on the possibility that a traveler will wander in and make the work complete.” Looked upon this way, these artists’ installations exist as, among other things, a perpetual invitation to collaborate.

Rickert chose Charles Albert Szukalski’s The Last Supper as the model for an elaborate photo shoot. Its likely been photographed more than any other work in the museum, but it’s doubtful that anyone’s ever captured it like Rickert.

At first glance, Rickert’s photograph appears to be a moonlit shot. But looking closer, one notices impossible shadows and reflections. The photograph was taken in broad daylight.

“As we enter our second day of our Fellowship, the combination of our processes and how we work together seems to be falling into place,” Rickert wrote in the day’s travel journal, pointing out that collaboration and, for that matter, friendship, extends to practical needs. Berrini helped Rickert lug her heavy camera equipment around; Rickert brought Berrini coffee every morning.

Rickert further writes about the selflessness that’s crucial to a successful collaboration. “I’m no longer just thinking about images that please my eye but have to consider how they will work for her,” she writes.

Read about Days 3 and 4 of Berrini and Rickert’s journey along Highway 95 here.

On the final days of "The Fellowship of Highway 95," Lindsey Rickert and Francesca Berrini process what they experienced in Nevada.
Sponsored by Travel Nevada
travelnevada