This Image Was Crowned NASA's Most Spectacular Portrait of Earth - Atlas Obscura
Want to see fewer ads? Become a Member. 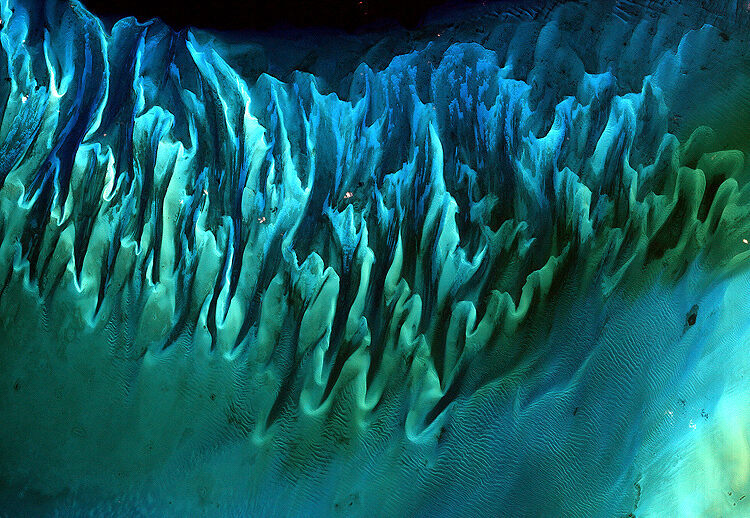 After five rounds of eye-popping competition, NASA’s Earth Observatory has anointed a winner in its Tournament Earth contest‚ the ideal springtime bracket challenge for science and photography nerds. If you’re keen to take a mental vacation from the woes of this world, let your eyes wander the details in the winning image—a depiction of ocean sand and seaweed in the Bahamas, snapped from space.

Home to deep trenches and busy volcanoes, the ocean floor is anything but flat—and in addition to these persistent geological features, the watery terrain is also continuously shaped by currents and tides. Those forces sculpt and whittle the ground into some pretty striking shapes, such as the jagged forms depicted in this winning false-color image, captured by the Landsat 7 satellite in 2001.

This image was favored by 66 percent of voters who cast an online ballot in the final round of the tournament. It bested the plume spewing from the Raikoke Volcano, an image of the Moon passing between a spacecraft and Earth, and a glimpse of our planet as a little freckle from the Cassini spacecraft, roughly a billion miles from Earth. (More than 165 images of Saturn’s icy, dusty rings were stitched together, and various frequencies of light were adjusted to fit into the visible spectrum; the color was tweaked to match Saturn’s true hues. Our home planet is a little speck near the top left.) The ocean image may have been voted the most wondrous, but all of the competitors are worth getting lost in.

What’s the Most Striking Image of Earth?

The Archaeologists Who Unlocked Cold War Spy Photos of Israel

How a 'Flying Photographer' Sees the World From Above

And don't forget to cast your vote in "Tournament Earth."
Read more
Thanks for sharing!