More and More Lighthouses Are Moving Away From the Shore - Atlas Obscura
Want to see fewer ads? Become a Member. 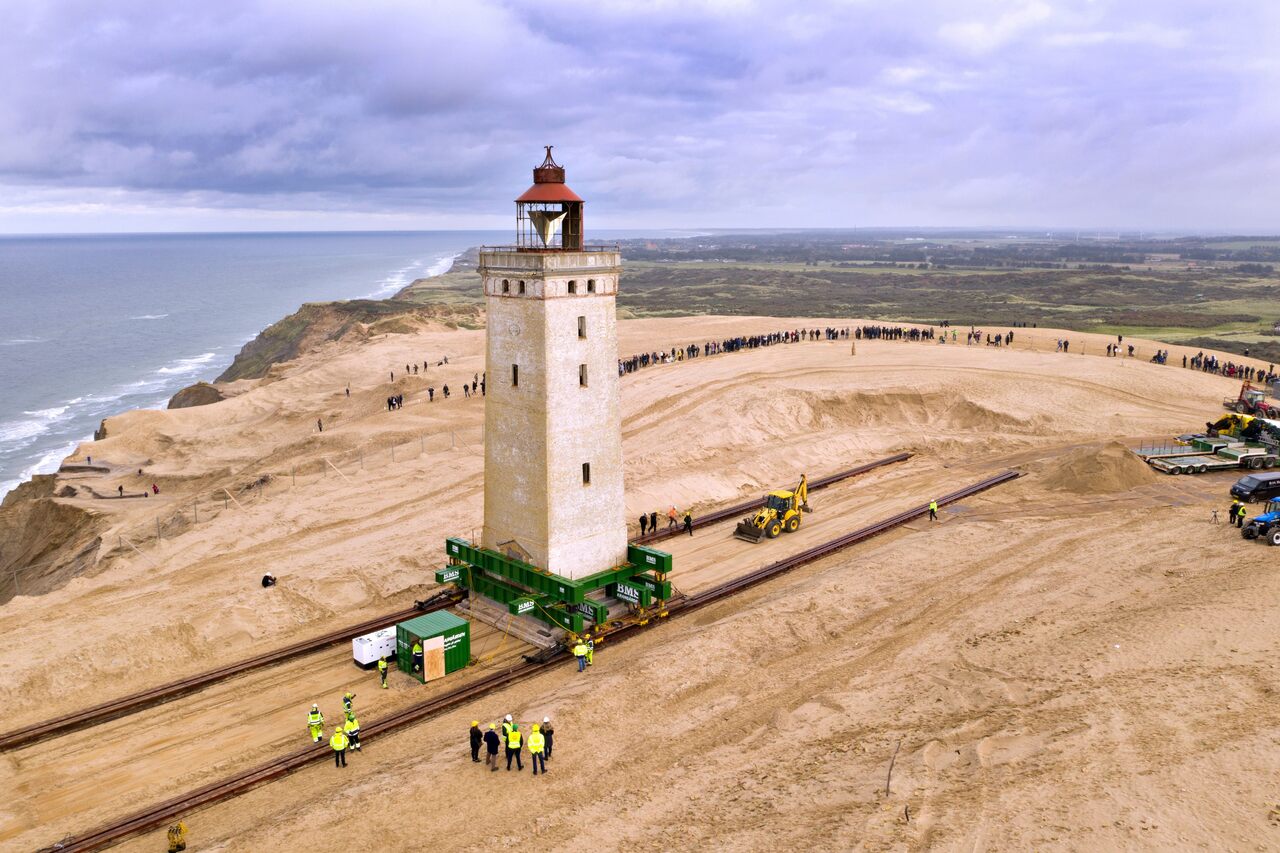 An abandoned lighthouse awaits its destiny: being buried under shifting sand.
Destination Guide

Until recently, the Rubjerg Knude Lighthouse stood at the edge of a cliff on the west coast of Denmark, overlooking the North Sea. But each year, the 120-year-old structure was getting six and a half feet closer to the water. When the lighthouse was built, it was 656 feet from the edge, NBC reported. A few weeks ago, it was just 20 feet from sailing over the cliff.

The strip of land around the lighthouse keeps narrowing as waves and wind pull sediment north, toward Skagen. “We’re stealing from the coastline,” says Jesper Blom-Hansen, chief of the nature agency that manages the lighthouse. Experts figured it was only two years—maybe three or four, if they got lucky—until the shore was so eaten away that the 75-foot-tall lighthouse would crash into the water 200 feet below.

As a beacon, the lighthouse fell out of use in the 1960s, when sand dunes drifted across the cliff, smothering and flattening buildings and scattering bricks. Over the years, freshly planted bushes and trees did little to stymie the sand. One dune between the tower and the sea reached nearly 100 feet tall, Blom-Hansen says, making the glow invisible to nearby boats. After a few decades of vacancy, a museum opened in the structure—but it, too, soon shut its doors against the onslaught of sand.

A few years ago, mindful of the encroaching water, the nature conservancy reopened the tower, installed a new interior staircase, and invited the public to climb to the top. Up there, you could see a sweeping view up and down the coastline. When the sunlight struck the water on a calm day, it sparkled. Other times, the wind whipped grains of sand hard enough that they scratched eyeglasses. “It’s beautiful and rough at the same time,” Blom-Hansen says.

It was supposed to be a last hurrah—a glimpse before the lighthouse was gone. But then people just kept coming. “It has become a major tourist attraction,” Blom-Hansen says, attracting as many a quarter of a million visitors a year. The experience was beautiful and unsettling. “You were so close to the edge that you felt like you were looking directly down into the ocean,” he adds. “It was just beyond your feet.”

When they noticed that the lighthouse had ardent fans, the nature conservancy, environment ministry, and nearby towns decided to try and save it by hauling it to more stable ground. They determined that it could only move horizontally: Try to maneuver it downhill, the team worried, and they’d lose control as it picked up speed. And if they waited too long, Blom-Hansen says, the lighthouse would be so close to the edge of the cliff that it would imperil the crew. At the end of October, they decided it was time.

This isn’t the first lighthouse to flee from the water that threatens it. The Cape Hatteras Lighthouse, in North Carolina, moved inland in July 1999, with the help of hydraulic jacks, steel mats, beams, dozens of sensors that kept tabs on vibrations and wind. In 2015, a time-lapse video recorded pistons prodding the 400-ton Gay Head lighthouse, on Martha’s Vineyard, inland at the rate of four inches a minute.

Moving a structure is often the strategy of last resort when other tactics haven’t been enough. New Jersey’s East Point Lighthouse, built in 1849, is starting to get uncomfortably close to the Delaware Bay—and as a first step, the state’s Department of Environmental Protection recently begun installing a sand-filled membrane designed to shield the shore from additional erosion, at least for a little while. It’s a “stopgap” measure, NJ Spotlight reported, designed to buy time while local agencies consider more drastic measures, including transporting the lighthouse. Nancy Patterson, president of the Maurice Township Historical Society, which manages the lighthouse for the DEP’s Division of Fish & Wildlife, told NJ Spotlight that the intervention was a bit like treating a wound with a Band-Aid. “You’re happy to get the Band-Aid when you need it,” Patterson said, “but you need something much bigger.”

Many other lighthouses may go on the lam in coming years—or risk being washed away. In a 2017 paper in PLOS One, a nine-person team of archaeologists estimated that a one-meter rise in sea levels would swamp at least 13,000 recorded historic sites in the southeastern United States alone. “Given the large numbers of cultural resources threatened by sea-level rise, planning possible protection and mitigation strategies should proceed with an increased sense of urgency,” they wrote.

When noodling over their possible mitigation strategies, the Danish team didn’t look to the other lighthouses that had journeyed inland. (Blom-Hansen says they just didn’t think of it.) But did they did consider several options, including dismantling and rebuilding it brick by brick, or hoisting it with cranes, the way you might move a windmill or turbine.

In the end, they settled on jacking it up with hydraulics, then lowering it on eight “roller skates,” which glided along tracks. The public could cluster outside a fence to watch the lighthouse crawl inland, but the action was sluggish. To keep the structure safe on its little jaunt, “everything was going very, very slowly and very smooth,” Blom-Hansen says.

The lighthouse reopened to the public on November 16, 2019. Blom-Hansen admits that while its new location, 230 feet farther inland, is much safer, the view is slightly less dramatic. “You can’t look directly down into the ocean,” Blom-Hansen says. Then again, he goes on, the view may return after the water and wind gobble up more of the shoreline. “You’ll have to wait 10 to 15 years until you can do that again.”

The Bumpy Business of Hauling Historical Sites to Safety

When trying to outrun erosion and sea-level rise is the best option.
archaeology

Reindeer herders and archaeologists must adapt to the new normal.
science

Researchers scramble to find and study everyday items preserved for millennia and now at risk.
forests