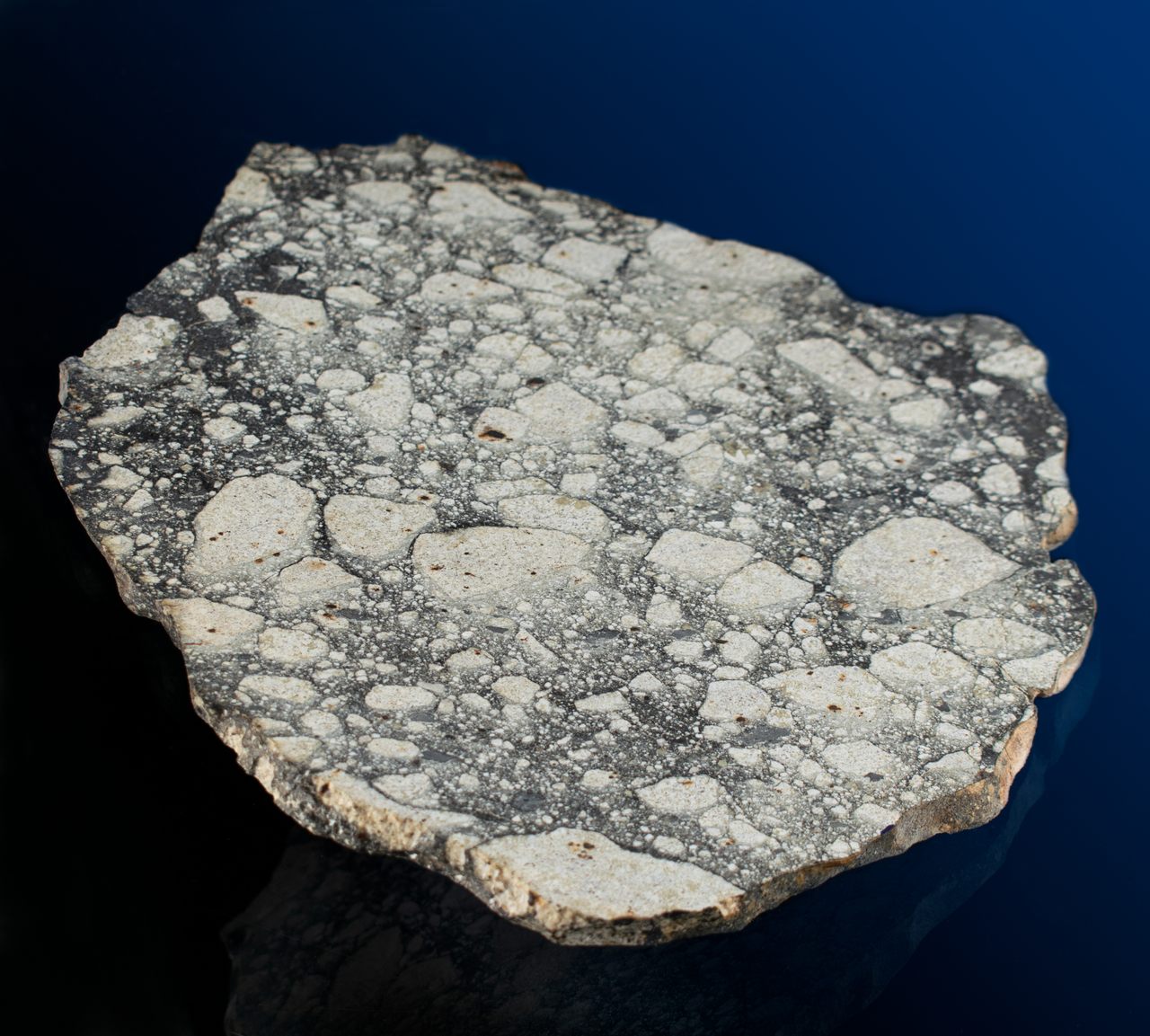 This is what a piece of the Moon looks like after 1,000 years on Earth. Courtesy RR Auction
In This Story
Destination Guide

Humankind still can’t make it to every part of the Moon, but the Moon can still send bits of unexplored territory to us.

Headlining RR Auction’s Space Exploration sale is a slice of a lunar meteorite known as Northwest Africa 5000, or NWA 5000. At the time of its discovery in July 2007, NWA 5000 was the largest known lunar meteorite—that is, a chunk of space rock on Earth known to have come from the Moon. At more than 25 pounds, it was a larger piece of Moon than anything in NASA’s Apollo collections, and may well originate from a region of the satellite not yet visited by astronauts. The meteorite has since been cut several times, and an even larger one has since been found, but the slice currently on the block represents an aesthetic and scientific anomaly. No wonder it’s projected to fetch a quarter-million dollars.

Adam Hupé, a computer engineer and meteorite collector who consigned NWA 5000 to RR Auction, says he got “first crack” at the historic rock after it was discovered in the Western Sahara Desert, likely by nomadic people in an area under Moroccan control. Over the years, he had developed relationships with some of Morocco’s mineral and fossil dealers, and arranged with them to be notified of new discoveries before anyone else. But he had never before purchased anything with the heft—physical, financial, academic—of NWA 5000. “You could buy a house,” he says of the price he ultimately paid, though he won’t disclose the figure.

Among NWA 5000’s several distinguishing features is (was, actually) its wholeness. In other words, unlike most meteorites, it seems to have survived its crash landing on Earth intact. Hupé says the surrounding area of the Sahara was combed for 10 years in search of “pairings,” or fragments that broke off from the mass. None were found. Research later determined that it had been sitting undiscovered in the Sahara for a millennium—more than enough time to stabilize and equalize with the terrestrial atmosphere. According to RR Auction, it requires “no special care other than that of security.”

Eventually, however, Hupé did begin slicing the rock up. There were several reasons to do so. First, he could distribute smaller pieces to researchers, and he was interested first and foremost in learning what he could about the rock. Similarly, dividing NWA 5000 made it possible for fragments to land in more museums and reach more of the public. (The largest piece, an “endcut,” currently resides at the Yale Peabody Museum of Natural History.) Slicing the meteorite and selling some of the pieces, also gave Hupé an opportunity to recoup some of his investment, which had proved particularly burdensome; he had acquired NWA 5000 just a year before the Great Recession began in 2008. Still, for posterity, he commissioned an artist to create an exact replica of the uncut meteorite before cutting into it. The rock—and its subtle, grayscale contrast—is “almost impossible to photograph,” Hupé says, so he needed the duplicate. It’s exact in all but weight.

Cutting the rock up ended up yielding another benefit: being able see its interior from two sides. And that interior is something to behold. NWA 5000 retains metal that is 4.5 billion years old—the most iridium-rich naturally occurring metal ever identified, according to Hupé. The singularity of this material, he says, suggests that NWA 5000 actually comprises another meteorite that impacted the moon and became embedded. Think of it like a real-life artifact from Norse mythology: NWA 5000 gets us closer to understanding “these ancient cosmic hammers,” says Munir Humayun, a geochemist at Florida State University, in an email.

That insight, and inside look, makes “complete slices” more desirable than endcuts, Hupé says. The slice currently on the auction block, which Hupé nicknamed “The Perigee,” is the largest of the seven complete slices that exist, and measures about the size of a salad plate, about a third of an inch thick. (At 1.5 pounds, it represents roughly six percent of the original.)

“I tried not to get too attached to it,” says Hupé, as he prepares to part with The Perigee, “but I’ve put thousands of hours into micromanaging every aspect of it.” He may now want to consult our guide to finding meteorites if he’s keen to find a replacement.

The auction commemorates the 50th anniversary of the Apollo 11 moon landing.
museums

If you ever needed a lipstick gun or a heartbeat detector, you could be in luck.
space exploration

For Sale: The Instruction Manual Used During the First Moon Landing

It includes the first writing from a human on another celestial body.
Video • Wonder From Home

4:00
Want to see fewer ads? Become a Member.
From Around the Web
Atlas Obscura Trips
Sacred Granaries, Kasbahs and Feasts in Morocco
View This Trip
Thanks for sharing!