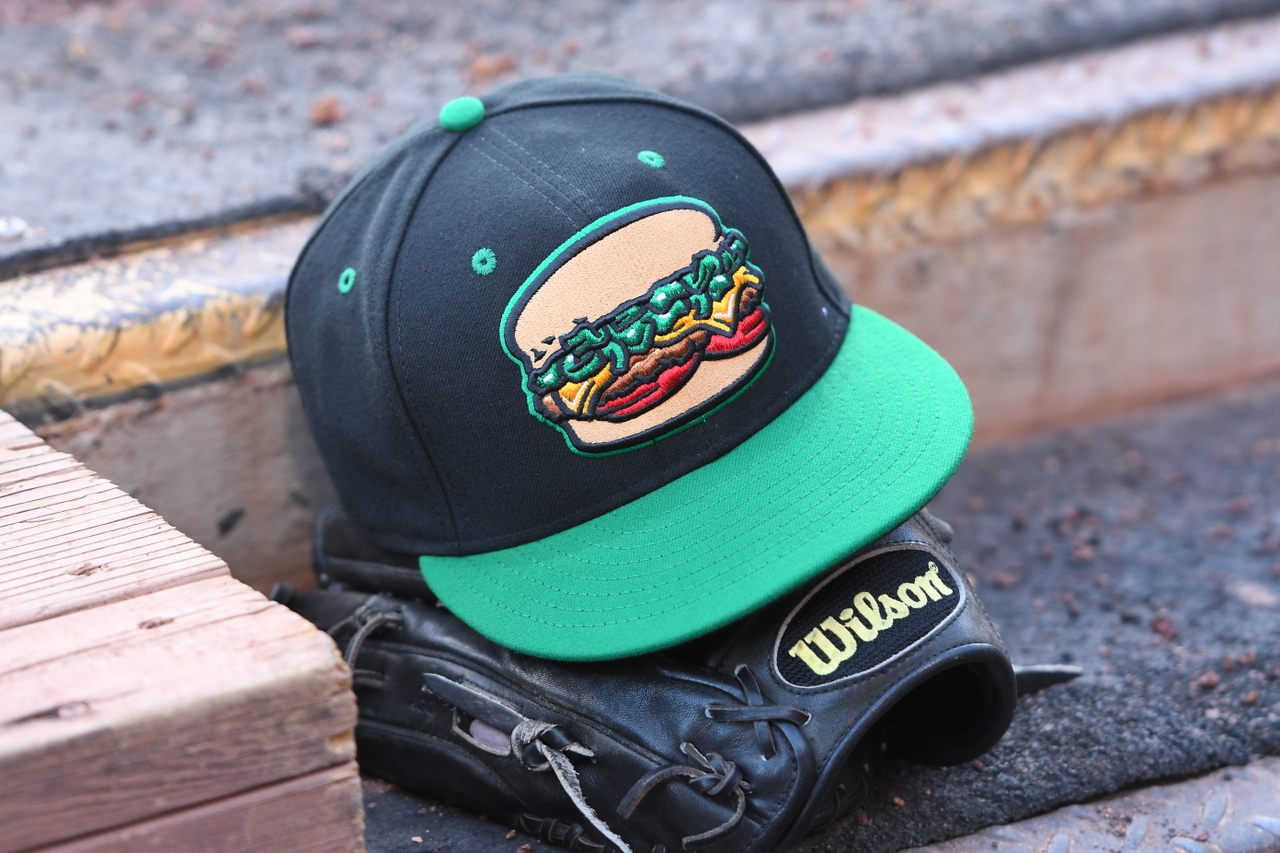 Green chile everything is the calling card of Albuquerque. That also occasionally extends to their minor league baseball team. Courtesy of Minor League Baseball
In This Story
Food

For a juicier burger, steam it like a vegetable.
Destination Guide

Hipolito “Paul” Cerda was busily churning out churros at San Jose’s Excite Ballpark. Next to him, a vendor sold the orange-and-black jerseys and hats of the minor league San Jose Giants. But their hottest merchandise did not sport the team’s normal name and logo. Instead, they featured a churro-shaped mascot swinging a cinnamon-stick bat.

The players on the field, smacking home run after home run against the Stockton Ports, all wore jerseys emblazoned with their alternative name: the San Jose Churros. The churro mascot on their caps also wore a wide-brimmed hat that patrons of the stadium recognized as Cerda’s trademark accessory. After all, this alternate name was chosen in his honor.

The San Jose Churros aren’t the only minor league baseball team that’s picked up an alternate name in the last few years. According to a ballpark estimate by Jeff Lantz, senior director of communications for Minor League Baseball, around 100 out of 120 teams have adopted an alter ego based on a local food. On occasion, the Hartford Yard Goats, the Charleston RiverDogs, and the Portland Sea Dogs become the Hartford Steamed Cheeseburgers, the Charleston Boiled Peanuts, and the Maine Whoopie Pies. (Or the Maine Red Snappers.)

The craze started in 2015, says Lantz, when the Fresno Grizzlies decided to change their name for one night to the Fresno Tacos. “The Fresno team, they put together a hat that had a taco on it,” he says. “When it came out for sale, it just exploded.” Attendance increased too, leading to a tidal wave of food-themed baseball teams. The trend has corresponded with a recent effort by Minor League Baseball to pick alternative names that honor local Latino communities, such as the Mariachis de Nuevo México and the Demonios de Des Moines. (Sometimes, non-food or cultural items are chosen as a team’s new mascot. That’s how fans in Nebraska ended up rooting for the Omaha Potholes.)

Some teams have foodie names full-time, such as the Jacksonville Jumbo Shrimp or the Montgomery Biscuits. But most of the teams adopt the alternate names only a handful of times each season. Home games take on the feeling of a festival, with players dressed head-to-toe in themed uniforms and concessions revolving around the featured food. Since minor league revenue comes from game attendance and merchandise, rather than advertising or big contracts, putting local food on a pedestal is a surefire way to draw a crowd and convince fans to open their wallets.

And that attention is badly needed. Last year was a nightmare for Minor League baseball, with COVID-19 cancelling games and seasons across the country. A massive restructuring in October also shrank the league from 162 teams to 120. The Minor League is even currently looking for financial help from the federal government. And while burger-and-dessert themed team names might not solve the whole problem, it’s one way to attract much-needed cash.

Lantz says that players typically don’t mind sporting a silly name, so long as it’s only a few times per season. “A lot of times, the wackier the name or the food item, the better,” he adds, in reference to team names like the Maine Whoopie Pies.

The San Jose Churros may not seem like the most local food—churros, after all, are not unique to San Jose in the same way that steamed cheeseburgers represent a certain part of Connecticut. But the name is an homage to Cerda, chosen after fans started making their own shirts honoring the long-time vendor. Can’t get much more local than that.

At the northern tip of Manhattan, the ballpark was a magnet for families, entrepreneurs, and celebrities.
sports

Why Jackie Robinson's Hall of Fame Plaque Had to Change

The legendary athlete wanted to be remembered as a great baseball player, regardless of race, but history has its demands.
sports

For Sale: A Relic From Babe Ruth’s Ill-Fated Year in Brooklyn

At the end of his career, the Bambino wanted the Bronx and got a different borough instead.
restaurants

Regional Chinese-Canadian cuisine is flourishing in some unlikely places.
Video • Wonder From Home

For roadside fast food, pull over at the giant orange.
San Jose, California