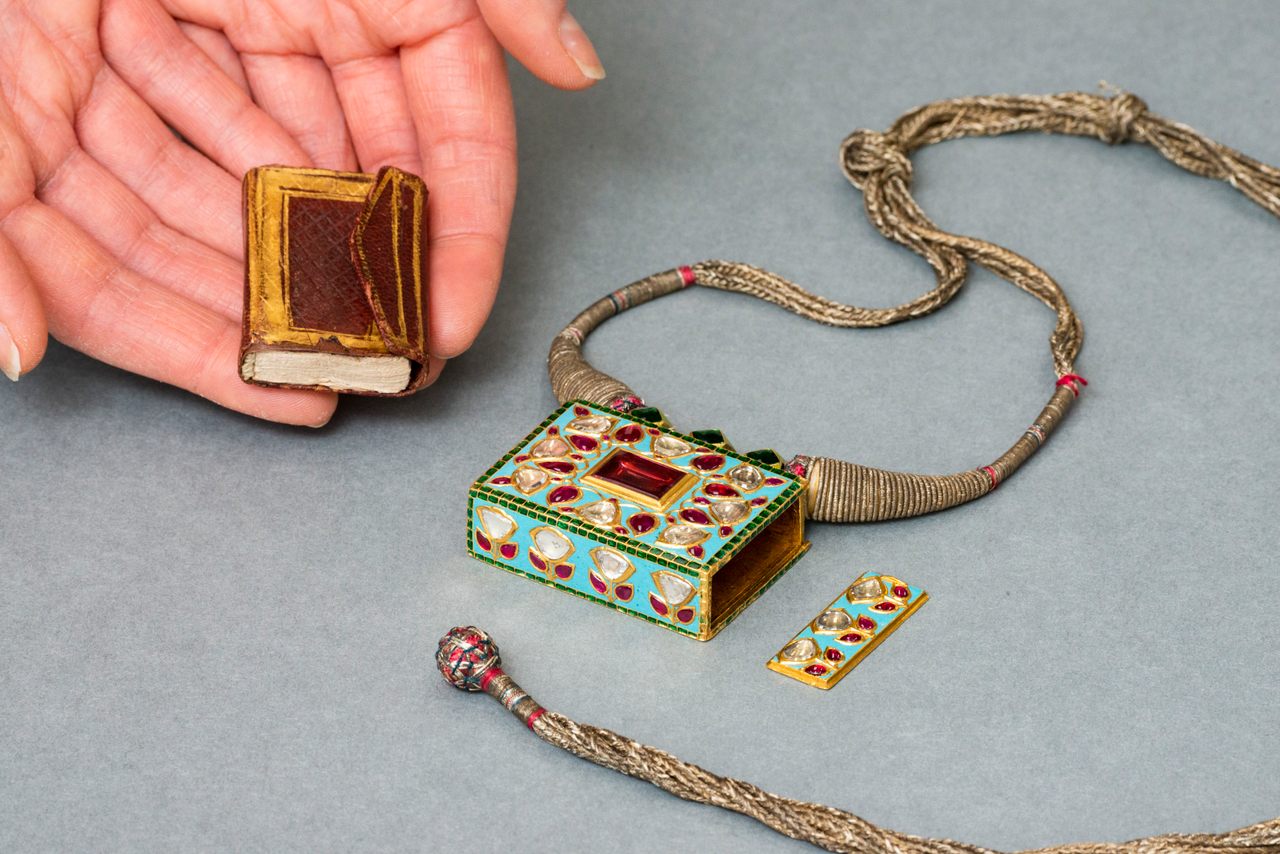 This Quran is small enough to fit inside a locket, and in your palm. Courtesy Royal Collection Trust / © Her Majesty Queen Elizabeth II 2021
In This Story
Destination Guide

A holy text, in both form and content, is an instrument of awe. The first thing one might notice about them, in many cases, can be their sheer bulk, as if heft must correspond to importance.

But it’s often the smaller objects that are most truly impressive, representing examples of discipline, precision, craft, and devotion. That makes this miniature Quran, currently on display in the Palace of Holyroodhouse in Edinburgh, Scotland, a marvel: the totality of a divine scripture within the space of a matchbox. Measuring just 46 x 35 mm (roughly 1.8 x 1.4 inches), this Quran is part of an enameled gold locket, bedecked with diamonds and rubies and attached to silver chains. Though it originated in the Mughal Empire, probably around 1700, British imperial officials eventually confiscated it and then gifted the Quran to the Royal Collection. The Quran is just one item in the exhibit Eastern Encounters: Four Centuries of Paintings and Manuscripts from the Indian Subcontinent, which covers some 400 years of relations between the British Crown and the rulers of South Asia. The exhibit is temporarily closed in accordance with COVID-19 precautions, but it is offering a virtual experience for now.

The Mughal Empire—which, at its peak, comprised parts of modern-day India, Pakistan, Afghanistan, and Bangladesh—was founded in 1526, and during the 17th century rose to become the richest empire in the world. The Taj Mahal is one obvious symbol of its immense wealth. A subtler one, according to the Oxford English Dictionary’s etymology, is the English word “mogul.” Sunni Islam was the religion of the court, and it’s thought that this miniature Quran belonged to Zinat Mahal, a favored wife of Bahadur Shah Zafar, the last of the Mughal Emperors. Though the empire had been hobbled and all but consumed by the time of Indian Rebellion of 1857, also known as the Sepoy Mutiny, that uprising and the retribution that followed marked the official end of the dynasty. After that, the era of rule by the British East India Company was supplanted by the British Raj, as the Crown assumed direct control of the subcontinent. According to an email from the exhibit’s curator, Emily Hannam, Mahal’s jewelry “was confiscated and sent to the Treasury of Fort William in Calcutta.” Mahal and her husband were exiled to Yangon, Myanmar (then called Rangoon), where the emperor died in 1862 and Mahal in 1886. In the interval, in 1876, Queen Victoria was named Empress of India.

The production of “miniature copies [of] religious texts is a well-established tradition throughout the world,” writes Hannam, “not only in India.” There’s another miniature Quran at the Morgan Library in New York City, and there are even others within the British Royal Collection. David Bryce, a 19th-century miniature bookmaker from Glasgow, printed miniature Qurans for British Muslim soldiers to travel with during World War I. Another edition, even smaller than its Indian counterpart and written in Turkish, is on display at Queen Mary’s Dolls’ House at Windsor Castle. Regarding the Mughal Quran on display in Edinburgh, Hannam writes that it’s not entirely clear whether the text is complete. She believes that it likely is, because “[a]bridged versions of the Quran are extremely rare,” but says that the manuscript is too fragile to be fully analyzed.

The 2017 film Victoria & Abdul portrayed the relationship between Queen Victoria and Abdul Karim, a Muslim courtier from India who became her advisor and taught her Urdu. The film helped burnish Victoria’s reputation as an enthusiast for Indian culture. But Gajendra Singh, an historian of colonialism in South Asia at the University of Exeter, is critical of the film. In Victoria & Abdul, Singh writes, Karim “shows no emotion or sentiment or stirring rhetoric except when genuflecting before his Empress.... a one-dimensional portrayal,” in which Karim “is childlike in his stupor at British munificence.”

“I think what gets lost in this story,” Singh writes in an email, “is the tragedies that led to these treasures being looted and which could then lead to them being treated as an amusing gift.” Zinat Mahal and her family, he writes, were “forced into penniless exile,” and in the years following the rebellion, Delhi’s population shrank from roughly 600,000 to less than 42,000.

“I hope this is kept in mind as [this Quran] is displayed and viewed,” he writes. But Singh’s ultimate hope is return. “These artifacts, looted in blood and still stained with those sins, ought to be returned to India and the city of Delhi,” he continues. “This is the right thing to do and not because it washes away the sins of the past. It would also be helpful if some support was offered to the descendants of Bahadur Shah Zafar in Delhi. Many of them live in penury and have to rely upon charitable donations.”

The Archaeologist Who Collected 4,500 Beer Cans

And a description of some very stoned canines.
food

One of India’s most popular gastronomic exports tells a tale of empire.
objects of intrigue

In Guna Yala, indigenous women sew stories of legend, revolution, and even Minnie Mouse into the elaborate textiles known as molas.
ruins

1:22
Want to see fewer ads? Become a Member.
From Around the Web
Atlas Obscura Trips
Scotland: Highland Clans and the Trail of Tartan
View This Trip
Thanks for sharing!