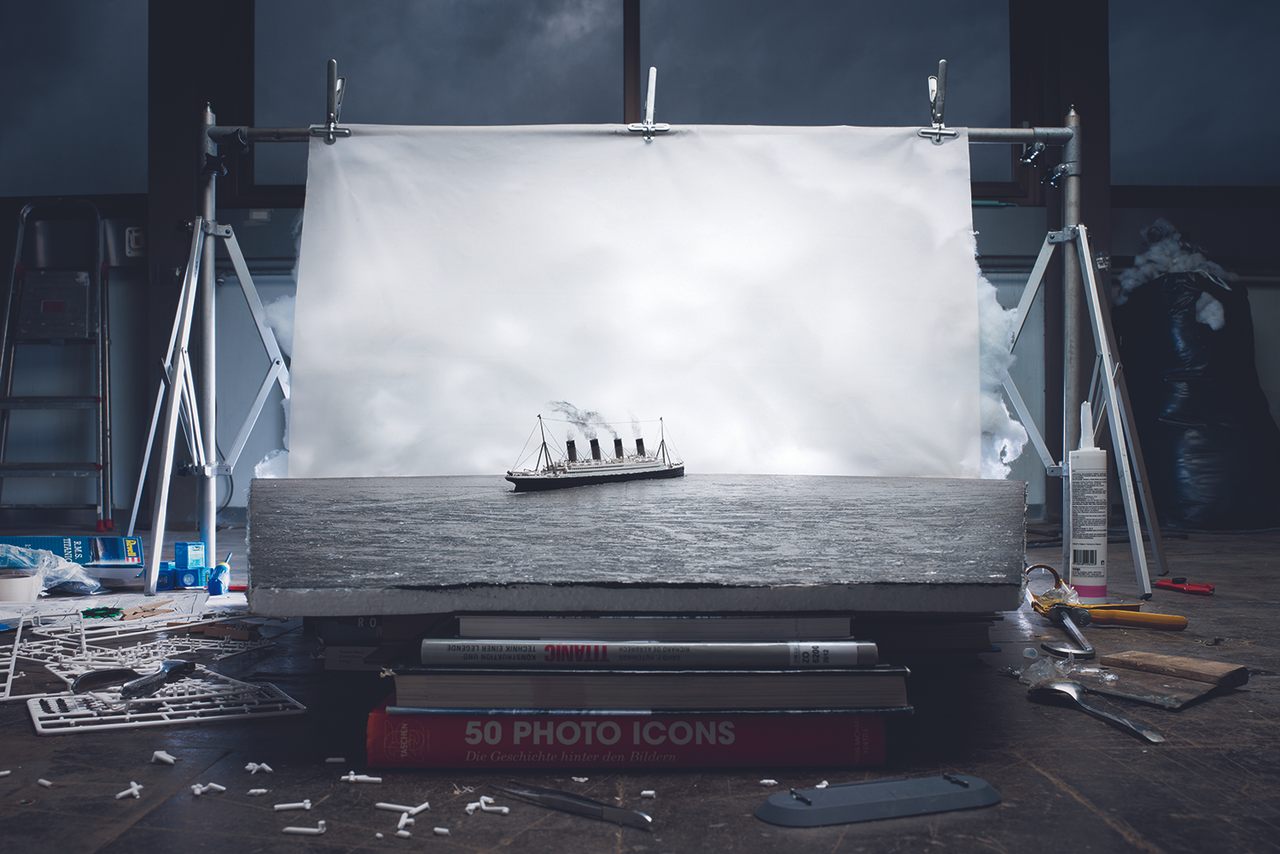 The auction of Andreas Gursky’s photograph Rhine II for a record-breaking $4.3 million in 2011 had an unintended artistic consequence: it inspired two Swiss photographers, Jojakim Cortis and Adrian Sonderegger, to try to recreate the image as a three-dimensional, miniature model. The original, which depicts a strip of the Rhine under a gray, low-hanging sky, was recreated using transparent paper and cotton wool for the clouds and plastic foil for the water. Now, six years and some 40 models later, they’ve released a collection of their recreations titled Double Take: The World’s Most Iconic Photographs Meticulously Re-created in Miniature.

Since the project began in 2012, Cortis and Sonderegger have built miniature models for some of history’s most recognizable photographs, from Joseph Nicéphore Niépce’s 1826 image View from the Window at Le Gras, to the iconic photo of the Hindenberg disaster, to Pennie Smith’s shot of The Clash’s Paul Simonon smashing his bass guitar in London. Along the way, they had to find creative ways to replicate everything from billowing clouds to moon dust.

“When we start, we discuss the materials, but it’s always trial and error,” says Sonderegger in an interview included in the book. One particularly tricky reconstruction was of Buzz Aldrin’s photograph of his footprint during the 1969 moon landing. The team tried several different substances to mimic the surface of the moon, including sand and flour, before settling on concrete powder. The footprint was fashioned from a piece of wood, which had to be pressed with just the right intensity for an accurate outline.

Cortis and Sonderegger try not to rely on Photoshop and can spend weeks getting a recreation right. They photograph their models surrounded by their studio tools, sometimes with a printed-out version of the original. But the scale of their models can still be surprising: their version of an aerial photograph of the Exxon Valdez tanker leaking 11 million gallons of crude oil is 7 meters deep, and about 1.5 meters wide at the front.

The pair have chosen images that depict tragedies, momentous historical events, and even a faked photograph (the famous 1934 Loch Ness monster image Nessie, by Marmaduke Wetherell). The book also summarizes the history of the photo they’ve recreated which, as Sonderegger notes, makes for some mind-bending realizations: “someone took an image, it became two-dimensional, then we make it three-dimensional again, and then we make an image also, so it’s back again to two dimensions!”

But historical photographs aren’t always immune to manipulation. Gursky altered his Rhine II image, and historians have investigated the authenticity of Robert Capa’s Spanish Civil War photograph The Falling Soldier, a recreation of which appears on the cover of Double Take. For Cortis and Sonderegger, creating models of these images is a form of visual examination. Says Sonderegger, “We want to activate the viewer; to push them to think about our photographs, and think about the original.”

Atlas Obscura has a selection of images from Double Take.

It was a ridge of water the height of an eight-story building.
modelsminiaturesvisualphotography

Think of it as the Great Indoors.
miniatures

Beautiful Miniature Books That Are Worth Sacrificing Your Eyesight For

At least while the lions behave.
Video • Wonder From Home