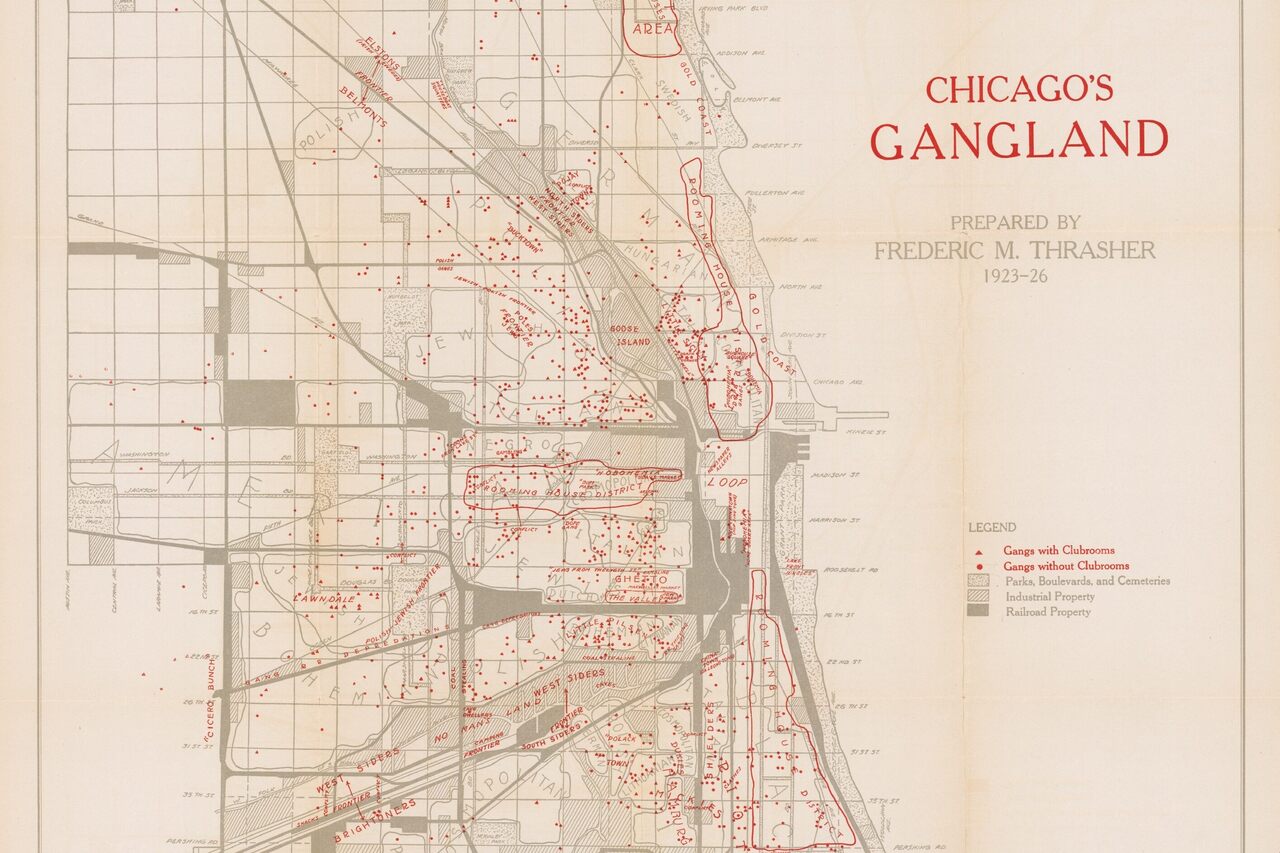 This map of Chicago's gangs was tucked away in the back pocket of Frederic Thrasher's 1927 book The Gang: A Study of 1,313 Gangs in Chicago. ALL IMAGES: COURTESY OF CORNELL UNIVERSITY - PJ MODE COLLECTION OF PERSUASIVE CARTOGRAPHY/CC BY-SA 3.0
In This Story
Destination Guide

In the 1920s, the streets of Chicago were home to hundreds of secret clubhouses and hideouts—home bases to thieving, violent gangsters. Between 1923 and 1926, one sociologist at the University of Chicago endeavored to track down and map the favorite haunts and hang-outs of more than 1,300 gangs for the project Chicago’s Gangland.

“No less than 1,313 gangs have been discovered in Chicago and its environs!” Frederic Thrasher wrote at the time. “Their distribution as shown on the accompanying map makes it possible to visualize the typical areas of gangland and to indicate their place in the life and organization of Chicago.”

Published in 1927, Chicago’s Gangland is tucked into the back of Thrasher’s seminal book on urban crime and ethnography, The Gang, a Study of 1313 Gangs in Chicago. Chock-full of gray and red demarcations, the hand-drawn, multi-layered map provides detailed insider knowledge of Chicago’s gang activity. Gangs are not only tied to their environment, but play a significant role in a city’s social distribution and structure, according to Thrasher. The map shows where certain gangs rule within the Gangland “empire,” which he explains isn’t just based on geography, but on “fissures and breaks in the structure of social organization.”

Thrasher’s map is extremely detailed. He depicted parks, boulevards, cemeteries, and railroads in different shades of gray, and even showed if hang-outs had clubrooms by marking them in red triangles and circles. He also inscribed important locations and gang territories, such as “No Man’s,” “Gang Camp” and “Death Corner.” The gangs each had their own distinct characteristics, creating a mosaic of regions.

“No two gangs are just alike,” Thrasher wrote. “Some are good; some are bad; and each has to be considered to its own merits.”

During the years between World War I and the Great Depression, many cities in the United States experienced a boom in both population and industrial production. As immigrants flooded to these urban centers, major shifts in social and spatial organization gave birth to gangs. Thrasher estimated (conservatively) that there were 25,000 boys and young men in gangs in Chicago. His work focused not on the likes of Al Capone’s mob, but rather the gangs of second-generation immigrant youths who were thrown into the “seediest aspects of American culture,” writes Greg Dimitriadis in the journal Cultural Studies, Critical Methodologies.

The mini-societies that sprung up around gang life led to what Thrasher refers to as “interstitial” areas of Chicago—a gangland of deteriorating neighborhoods, shifting populations, and impoverished and disorganized slums.

Thrasher’s cartographic representation constructs “a stage on which the scenes that are actually of sociological interest unfold,” writes Rolf Lindner in The Reportage of Urban Culture. Other sociology studies of the 1930s contain maps, but Thrasher’s Chicago’s Gangland is considered one of the first thematic maps that surveyed organized criminal activity. His investigation gives a rare glimpse of what gang life was like in 1920s Chicago.

“Gangland is a phenomenon of human ecology,” Thrasher concludes. “The gang develops as one manifestation of the economic, moral, and cultural frontier which makes the interstice.”

A Tour of Al Capone's 'Killer' Cadillac, Which Once Terrorized Chicago Streets

Help us keep them coming by directly supporting Atlas Obscura.
Become a Member
$5/month $10/month $20/month
See All Membership Options
Already a part of our membership program? Sign in.
No Thanks
Keep Exploring
map monday

Everything We Know About Springfield, Mapped

It started life as a jadeite boulder in modern-day Myanmar. Now it's a celebrated part of a Chicago museum.
taxidermy

The Black Taxidermist Who Made History at Chicago's Field Museum

A new exhibit celebrates the life and work of Carl Cotton.
art

A community of feminist crafters grapples with a patriotic quilt that a 99-year-old nurse left behind.
Related

A Tour of Al Capone's 'Killer' Cadillac, Which Once Terrorized Chicago Streets

It featured bullet-proof glass and a police siren.
Read more