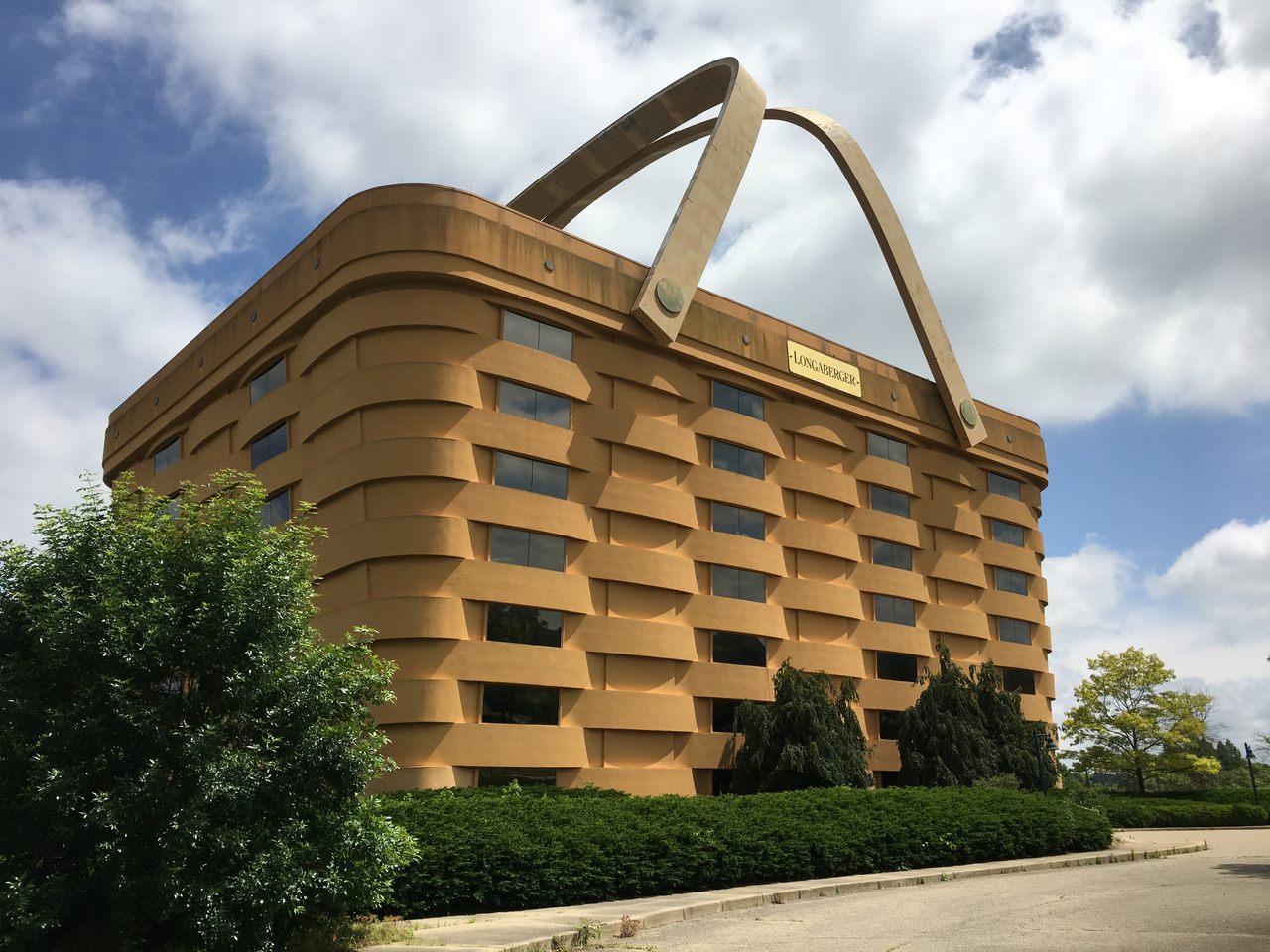 An office built to look like a giant basket.
Destination Guide

On October 20, the Big Basket opened its doors, and people wept. The seven-story, basket-shaped building in east Newark, Ohio—once the main office of the now-defunct Longaberger Company—was offering its first public tour since closing in 2016. More than 600 people showed up for the occasion. They came from small towns across Ohio, such as Ironton* and Washington Court House, some driving up to four hours to make it in time. They lined up at 11 a.m. for tours that started at 1 p.m. “People were in tears and hugging each other,” says Joyce Barrett, the executive director of Heritage Ohio, who helped organize the tour. “They were so happy to be back in the Basket.”

The one-day-only tour was held on a Sunday, the day before Heritage Ohio announced that the famed Longaberger Basket Building will soon re-open as a luxury hotel—securing the future of a building that many thought was doomed. But nobody knew this on Sunday, so they swarmed with questions about what was going to happen to their beloved basket. “One person wanted it to be a senior citizen center,” Barrett says. “Others wondered if the company was coming back.”

Though the company closed its doors for good in 2018 and has no plans to return, Longaberger is still a household name in Ohio. At its peak in 2000, Dave Longaberger’s company employed more than 8,200 people, making it one of the primary employers in the Dresden, Ohio area. Longaberger, the son and grandson of basket-weavers, sold America on his handmade, well-crafted Longaberger baskets with Amway-style sales associates, who earned a percentage of any commissions made by the people they recruited. The Facebook group “Preserving Dave Longaberger’s great American story” has more than 4,000 members.

The Big Basket, which opened in 1997, is a scaled-up version of Longaberger’s signature Medium Market Basket. Most of the cherry wood used in the Big Basket came from the grounds of the Longaberger Golf Club in Hanover, according to Jim Klein, a former president of the Longaberger Company who was present at the tour. “It may appear kitschy on the outside, but it’s absolutely spectacular inside,” Klein says, referencing the 30,000-square-foot atrium and curving, cherry-wood staircase. The Big Basket also boasts two enormous handles, heated during the winter to thaw ice. “The basket is a symbol of overcoming adversity, of what you can achieve,” Klein says, adding that he and his son, like Longaberger himself, have dyslexia.

The tours were led by former Longaberger employees from every level of the company, including a former executive, machinist, and groundskeeper, Barrett says. They volunteered after Klein put a call-out on the Facebook page and received 500 responses for 40 slots, according to the Newark Advocate. The guides showed the first two floors of the building, including the marble entryway, and stopped by the Big Basket’s auditorium, which looped a seven-minute time-lapse video of the building’s construction. “Some people sat and watched that video several times,” Barrett says. (The rest of the tour consisted of more mundane, less-baskety office spaces and conference rooms.)

When Klein moved from Princeton, New Jersey, to serve as Longaberger’s president, in 2006, he spent many of his first weekends alone in the Big Basket. “I didn’t know what to do with myself, so I would watch Dave Longaberger videos on marathon and get inside his head,” Klein says. The office had a view of a small red barn with a racetrack, and every day before noon the barn owner would take his trotter horse out on the track. “To me, that horse represented the passage of time, and the limited amount of time we have on Earth,” he says.

The current interior of the Big Basket also has a limited amount of time on Earth—but luckily for the extended Longaberger community, the building is scheduled to reopen in 2020 as a luxury hotel. The co-owners, Bobby George and Steve Coon, of Coon Restoration & Sealants, purchased the building on December 29, 2017, one month before a foreclosure auction. They plan to use historic-site tax credits to renovate the interior; architects will have to get creative in adapting the Basket’s long windows, which appear between the gaps of its seemingly woven exterior. “If you make them in hotel rooms, you’re going to need to put two rooms per window,” Barrett says. But the new owners say that the Basket will live on. “This will stay a basket,” Coon told the Newark Advocate. “It’s going to be a basket forever.”

This post previously misspelled the name of the city of Ironton.

An architect has worked to save Aliano's unusual facial features, thought to ward off the "evil eye."
architecture

How to appreciate ice without getting all that cold, with the Atlas Obscura Places Team.
maps

During the winter months, the iconic French site casts a perfect shadow on a bay full of history—and quicksand.
Video • AO Docs