In the 1800s, This British Isle Was Covered in Groves of 12-Foot-Tall Kale - Gastro Obscura
Want to see fewer ads? Become a Member. 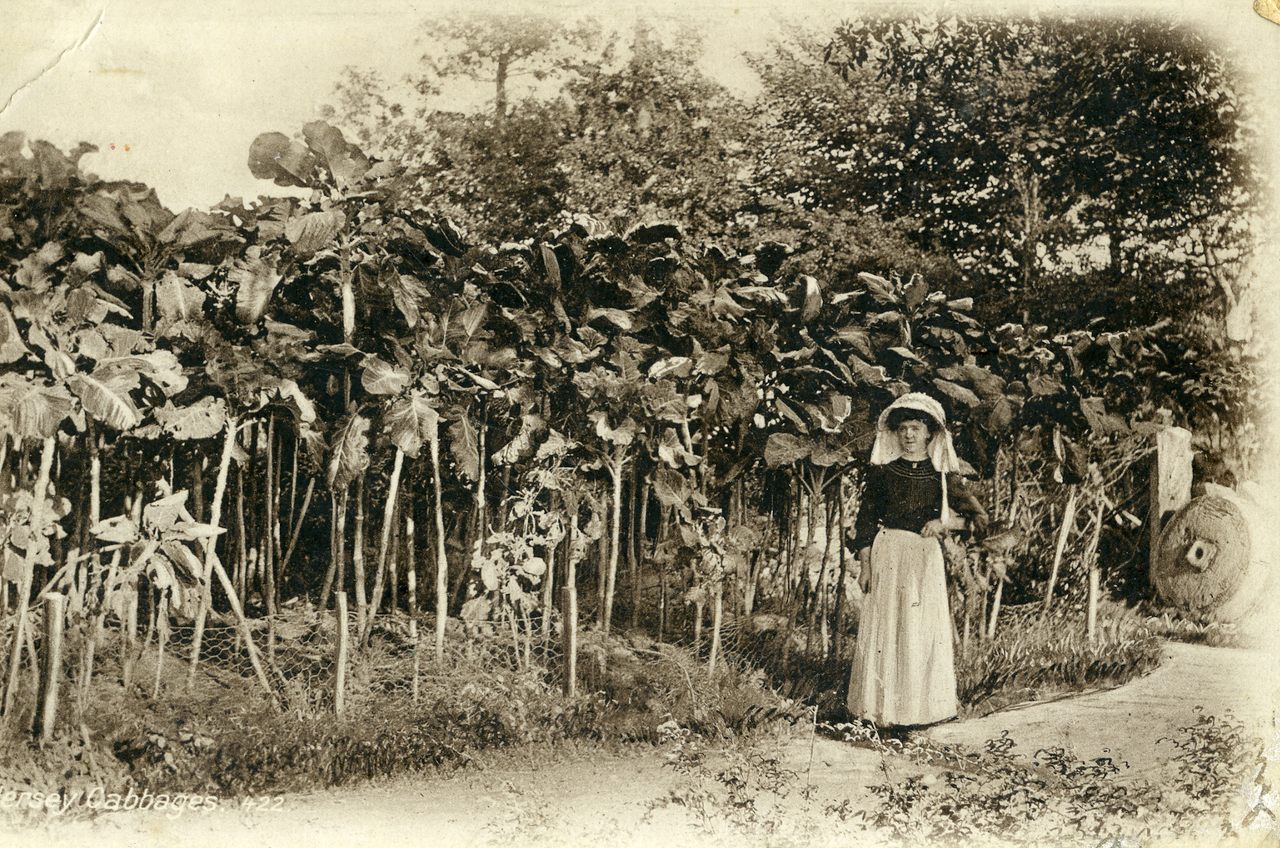 Skyscraper cabbages: That’s how botanist Edgar Anderson described the massive kale endemic to Jersey, the little island off the coast of France. You can almost hear the wonder in his voice as he recalls his visit: “The lower leaves had all been harvested from time to time, as green food for cattle, and the plants had kept on growing until they were well over my head; I really walked in their shade.”

Up until recently, 12-foot kale was a common sight on the island of Jersey. Dotted throughout the agricultural landscape, the plants dwarfed everything except for full-sized trees. They clumped in thickets between potato fields, served as posts for beans to twine around, and even formed living fences. With their strange, nubbly stalks and drooping, silvery leaves, they looked like palms, lending the temperate little island an oddly tropical appearance.

Jersey’s gentle climate, stabilized by the sea, provides the perfect conditions for monster kale stalks to shoot towards the sky. Sown in the late summer, the plants could keep growing all through the island’s mild winter. The crop’s primary use, at least at first, was as animal fodder; according to some accounts, just 60 plants were sufficient to keep a cow fed for a year. Rolls of the famously rich and golden Jersey butter those cows produced could be wrapped up in leaves from the same plants before being taken to market. Another Jersey delicacy, the cabbage loaf, got its flavor from being baked between two jumbo leaves.

Although the plant is now known mostly as Jersey kale, it has gone by many names, attesting to its long history of human cultivation. In French, it was known as chou cavalier; in Portuguese, couve galega; in English, long jacks. Scientists knew it by the mellifluous name of Brassica oleracea longata; Victorian-era salesmen rebranded it under the tempting title “Waterloo Caesarian Evergreen Cow Cabbage.”

It’s hard to say exactly where the crop originated or how it came to attain its ultimate towering form. But we do know that it was the Jersey growers who hit upon the bizarre innovation that guaranteed the plant’s fame: kale walking sticks. On the island, after the plants had served their purpose as fodder, they lived a second life. Craftspeople on Jersey dried, sanded, varnished, and transformed them into canes. Particularly ingenious growers even discovered a method of digging up their kale and replanting it at a slant, so that the stem would grow into a curved handle.

When you hear “kale walking sticks,” what do you imagine? Whatever you’re picturing, I’m willing to bet that the real article is much more elegant: golden brown, appealingly knobbly, and extraordinarily light. They were irresistible souvenirs. “Nearly everyone who goes to Jersey brings home a walking-stick made of the dried stalks of Jersey cabbages,” declared an 1899 edition of The Strand Magazine. Tourists were struck with “Jersey fever”—the irresistible desire to own a kale walking stick. Their friends back home would have to content themselves with postcards of farmers grinning up from the shade of their kale forests.

But fashions fade. Perhaps it was the fact that farmers had begun to turn to other forms of fodder, or perhaps it was the rise in cheap air travel, which encouraged English tourists to travel much farther afield than Jersey. But by the 1970s, walking-stick kale had become a rare sight. Today, there are only two traditional walking-stick kale growers working on the island: Philip and Jacqueline Johnson.

The pair stumbled into the business more or less accidentally. They grew their first walking-stick kale on the suggestion of their five-year-old son, Robin. Soon enough, their backyard had been transformed into a kale forest, and they found themselves at the helm of a miniature cottage industry. The process is time-intensive—it takes more than a year to grow each plant, and two to three years to dry them completely—but they find that it’s worth the work to keep the tradition alive.

To learn more about what it’s like to grow walking-stick kale, I spoke to contemporary artist John Newling, who has made extensive use of the plant in his work. To him, they serve as a very literal representation of the way nature supports human life. For one exhibition, Newling started by planting about 120 walking-stick kale plants in his back garden. It was demanding work: Each day, he had to pick off the plants’ leaves in pairs, in order to encourage them to shoot up sky high.

The plants quickly attracted attention. As Newling recounted, “They do give off, en masse—the way we were doing them, over a hundred in a small garden—quite a smell of cabbage.” Newling’s neighbors went hunting for the source. “We had to invite them to the garden and explain what we were doing. They loved it! They kept popping by to see them; they couldn’t believe these things, growing like trees, very quickly.” The aroma attracted other visitors too. “One day, in the middle of summer, I thought it was snowing,” Newling recalled. “It was cabbage whitefly… There must have been hundreds of thousands of them, all descended at the same time.”

If you’re willing to brave cabbage odors and whitefly blizzards, you too can grow your own walking stick. Just a year of growing, two years of drying, and a few hours of sanding and polishing, and you’ll be the spitting image of a fashionable English tourist, circa 1890.

On a Remote Island, Locals Protect Seabird Eggs They Once Hunted

The landscapes on Hormuz are striking—and edible.
islands

Mark Twain once called the allium the “pride and joy of Bermuda.”
food

The vegetable is a reminder of the legacy of dispossession.
Video • PinDrop

In East Portland, a 24-hour vending machine distributes world-class pastries.
Sponsored by Travel Portland
Want to see fewer ads? Become a Member.
From Around the Web
THE GASTRO OBSCURA BOOK
Taste the World!
An eye-opening journey through the history, culture, and places of the culinary world. Order Now