Will the Jaguar Return to the American Southwest? - Atlas Obscura
Want to see fewer ads? Become a Member. 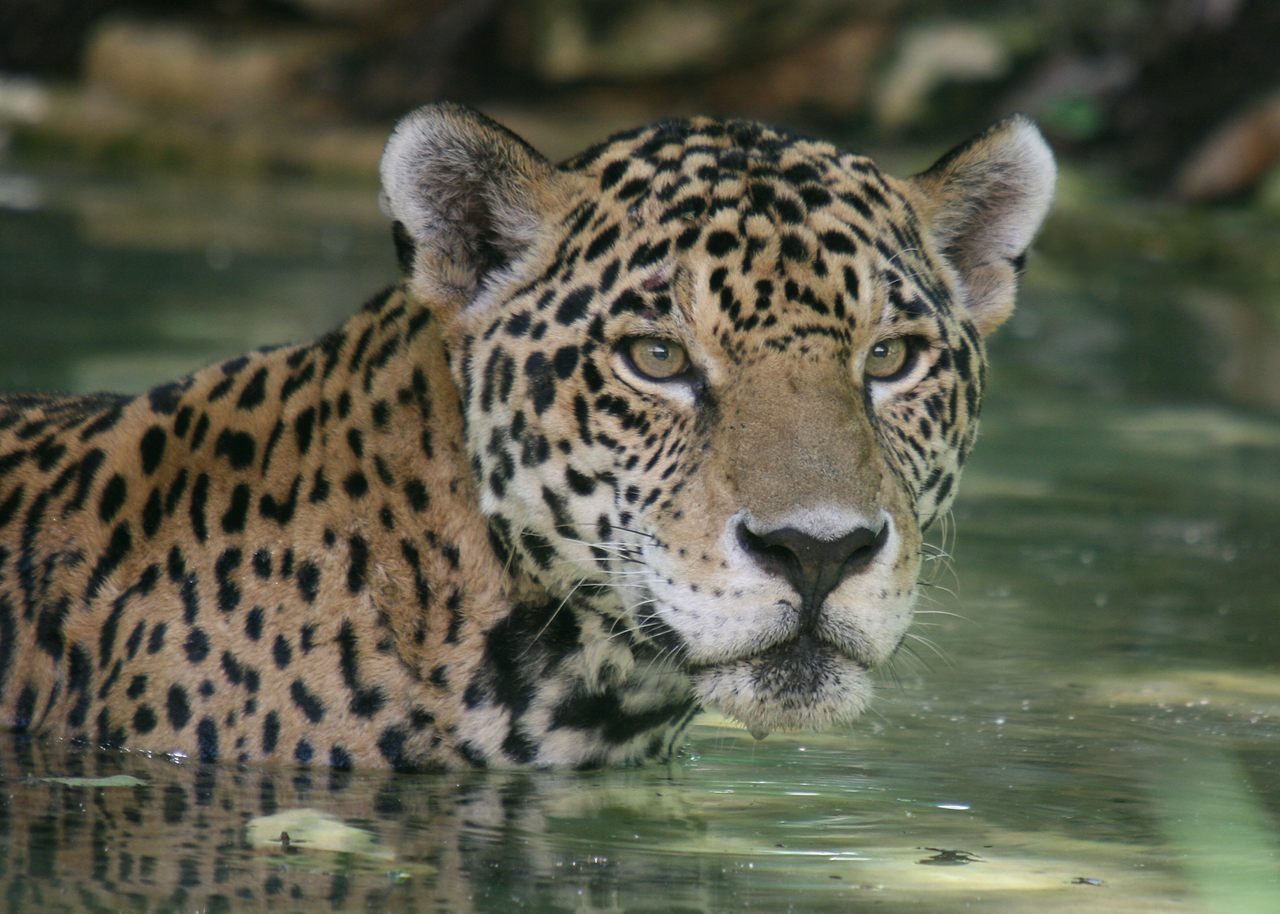 A jaguar in Mexico escapes the day's heat in a shady pool. MDParr/Getty Images
In This Story
Destination Guide

Jaguars are the only species of big cat found in the Americas. They range as far south as Argentina, and once roamed as far north as the Grand Canyon in the United States. Today the northernmost breeding population is in the northwest Mexican state of Sonora, just south of the border with Arizona.

In the Americas, the jaguar has long been an icon and symbol of power and connection to the spiritual world in mythology, philosophies, culture, and art. Jaguars are apex predators with diverse diets that include more than 85 different prey species. This gives them a specific but prominent role in each ecosystem where they are found.

The International Union for the Conservation of Nature classifies jaguars as “near threatened,” with total population estimates ranging between 64,000 and 173,000. But evidence shows that local populations across the Americas are decreasing at alarming rates. Jaguars’ total range has shrunk by more than half in the past 70 years, mainly because of hunting and habitat loss.

Could jaguars return to the Southwest U.S.? Some experts think it’s possible. Jaguars from southern populations in Mexico could recolonize their former territories in Arizona and New Mexico, or humans could reintroduce them there.

We study biodiversity and wildlife conservation in the U.S.-Mexico borderlands and have documented jaguar movements close to the border. From our research we know there are only two main corridors in the western borderlands that jaguars could use to get into the U.S.

In our view, maintaining these corridors is crucial to connect fragmented habitats for jaguars and other mammals, such as black bears, pumas, ocelots, and Mexican wolves. Increasing connectivity—linking small patches of habitat into larger networks—is a key strategy for conserving large animals that range over wide areas, and for maintaining functional ecological communities.

The arid environment of the American Southwest has naturally limited jaguars’ distribution in North America. Once these cats were top predators in the forested ecosystems of the U.S. Southwest, but predator control programs and hunting decimated their populations in the 19th and early 20th centuries. The last female jaguar in the U.S. was killed in Arizona in 1949. In 1996, an outdoor guide and a hunter photographed a male jaguar in the Peloncillo Mountains in southeastern Arizona. Since that date other jaguars have been identified, but no females or cubs have been reported.

In contrast, jaguars are known to be present in the northeast corner of Sonora state in Mexico. Here the Cajon Bonito stream, which flows from the west slope of the San Luis mountain range in the Continental Divide, supports jaguars and other large animals, including black bears, American beavers, and ocelots.

For two decades, lands surrounding the stream have been under a restoration program run by Cuenca Los Ojos, a nonprofit that works to protect and restore land on both sides of the border. They now are part of a voluntary protected area program under Mexico’s Natural Protected Areas system. To the east, the Janos Biosphere Reserve includes habitat for jaguars. North and south, a combination of ranches dedicated to conservation and natural protected areas provides the habitat connectivity that jaguars need to move between Mexico and the U.S.

In 2021 we filmed a young jaguar whom we called El Bonito roaming in the U.S.-Mexico borderlands. Each individual jaguar has a unique pattern of spots on its skin; when we acquired videos of both of the cat’s flanks, we realized that we actually were seeing two jaguars in our study area. We dubbed the second jaguar Valerio. Lately, he has been spotted more frequently than El Bonito in the Cajon Bonito stream area.

Male jaguars have to disperse as they become adults to find available territories and potential mates. Females tend to occupy areas near where they were born, a pattern common among mammals. The size of a female jaguar’s territory depends on prey abundance and the availability of shelter. Jaguar males will travel across several female home ranges to increase their mating opportunities, so males’ home ranges can measure from roughly 15 to 400 square miles (35 to 1,000 square kilometers).

El Bonito and Valerio were juveniles when we first recorded them. We first filmed Valerio at our study site in January 2021. Since then, both cats have been using the stream as a corridor. Recent videos show Valerio cheek-rubbing a fallen tree, which suggests he is establishing a territory in this borderlands area. At our study site, we have recorded both jaguars just 2 miles (3 kilometers) south of the U.S.-Mexico border. North of this site is Guadalupe Canyon, a natural corridor in the Peloncillo Mountains that runs into the U.S. at the border between Arizona and New Mexico.

In 2021 the border wall was constructed across Guadalupe Canyon, stopping at the Arizona-New Mexico line. The New Mexico portion of the Peloncillo and San Luis mountain ranges remains open. U.S. and Mexican government agencies and conservation organizations are working together to restore western species at the brink of extinction. Growing populations of Mexican wolves, black-footed ferrets, California condors, and bison offer hope that recovery is also possible for jaguars.

According to a 2021 study, the population of jaguars in Mexico increased during the past decade and now is estimated at 4,800. As the number of jaguars in Sonora increases, so do the chances that females could reach the border and potentially mate with the male jaguars we have documented there.

Habitat loss and illegal killings are still the main threats to jaguars in northern Mexico. Creating natural protected areas that could support breeding populations and offer routes for northward expansion would help accelerate natural recolonization of jaguars into the U.S. Multiple institutions and scientific research projects have highlighted the need to keep natural corridors open to maintain habitat for diverse communities of plants and animals.

In addition to jaguars, our camera traps have identified 28 other species of mammals, including ocelots, pumas, and black bears. All of these animals have at least some need for connected landscapes if they are to survive for the long term.

In our view, making it possible for jaguars to naturally recolonize suitable habitat in the U.S. is a unique opportunity to foster animal movement in the borderlands. Keeping these landscapes connected will benefit all species in this ecologically unique region that serves as a wildlife source and pathway.

Ganesh Marin is a Ph.D. candidate in wildlife conservation and management at the University of Arizona; John Koprowski is dean of the Haub School of Environment and Natural Resources, University of Wyoming.

Lauded for her research on gentle giants of the sea, Andrea Marshall is using her fame to find hope for our troubled oceans.
Video • AO Docs

3:38
Want to see fewer ads? Become a Member.
From Around the Web
Atlas Obscura Trips
Oaxaca: Tastes of Past & Present
View This Trip
Thanks for sharing!