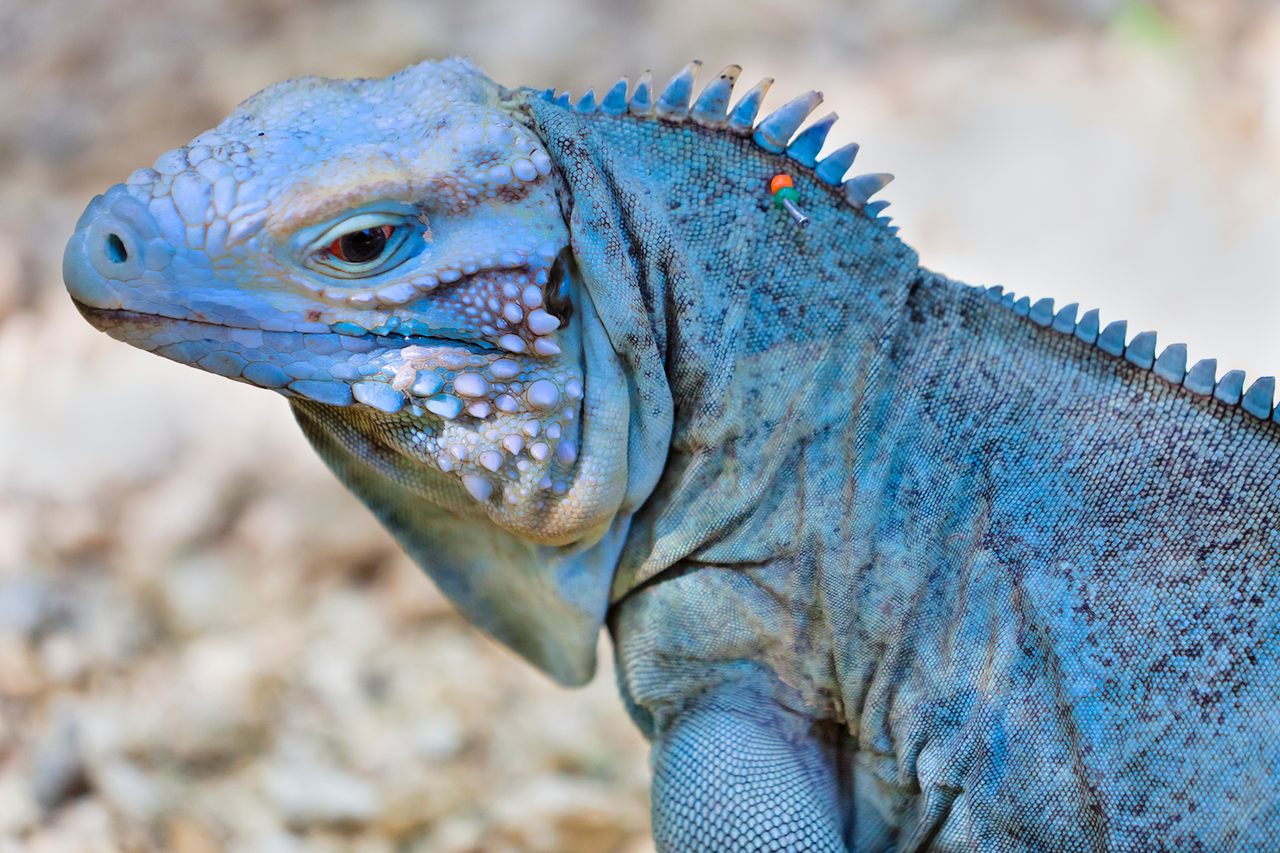 Conservationists have pinned beads in the crests of the island's blue iguanas to identify different individuals. Flavio Vallenari/Getty Images
In This Story
Destination Guide

Along a long, straight stretch of the Queen’s Highway on Grand Cayman, regular signs warn of “Iguana Crossing.” Indeed, green iguanas cling to the tree limbs throughout the island. But a sharper eye might spot, in a rustle of leaves on the ground, the elusive, lethargic blue iguana.

The Caribbean has long been beset by invasive species, most notoriously the spiky, venomous lionfish. As they did with lionfish, conservationists and chefs have started hunting and cooking the local green iguanas. It’s part of an effort to save their native blue brethren, which are only found in the wild on Grand Cayman.

First introduced to the island as pets, green iguanas are originally from Central America. The creatures can grow up to five feet long, weigh as much as 17 pounds, and live for more than a decade. What might be one of their worst traits, however, is that they can lay up to six dozen eggs at one time. It was estimated in 2018 that there were as many as 1.6 million green iguanas on the island: more than 30 times the human population of Grand Cayman. But in 2002, there were only about a dozen wild blue iguanas left.

Grand Cayman blue iguanas are even larger than green iguanas, weighing up to 25 pounds. But green iguanas are far more active. “They are a threat to the indigenous blue iguana population, competing for habitat and food and bringing with them pathogens which are harmful to the blue iguana population,” says Luke Harding, the operations manager of Blue Iguana Conservation. The Cayman Islands’ largest native land animal, blue iguanas cannot climb or swim well, and do not move very quickly along the ground. Yet green iguanas are good swimmers, adept climbers, and avid diggers, destroying the blue iguana’s habitat as well as land and property belonging to the two-legged inhabitants among the islands.

Apart from churning up earth to burrow and build nests for their eggs, green iguanas can also dig tunnels up to 80 feet long under highways, houses, and even under sea walls. Not to mention the tree fruit and other vegetation they damage by snacking on flowering buds. “These animals are now deemed pests, and cause damage to crops and gardens, eat wild bird eggs, and pose a threat which could cause massive ecosystem change,” says Harding.

To calm the perpetual motion of the treetops, the Cayman government put a bounty out on green iguanas in November of 2018, in hopes of killing up to one million. By July 2019, nearly 800,000 had been killed, at a payout of $5 per iguana. “For the foreseeable future, controlling green iguanas on Grand Cayman will need to be part of life here until some hope of eradication—getting them off the island completely—comes on the horizon,” says Sophie O’Hehir, a research officer at the Cayman Islands Department of Environment. As the bodies stacked up, however, the question of how to dispose of so many iguanas was soon answered by chef Thomas Tennant, owner of Tomfoodery Kitchen in George Town, Grand Cayman.

When Tennant was first approached by the Department of the Environment about serving lionfish, he immediately took it up in the restaurant where he worked at the time. It wasn’t long before he became interested in the iguana windfall as a way to “inform the population of the threats the green iguana poses to the Cayman Islands,” says Tennant. Serving iguana to customers, however, was a tougher sell to his boss. For the freedom to cook them, Tennant quit and opened his own catering company.

To make iguana meat more appealing to patrons, Tennant first tried to fry it like chicken, though the irregular sizes of the animals made it a false start. He then tried making a confit, before landing on iguana rillettes: shredded lizard meat slow-cooked in rich fat. He also endorses cooking iguana in a rundown, a classic Jamaican stew made with a sauce of reduced coconut milk.

Green iguana might be a delicious alternative meat that tastes a lot like roast duck, but it’s much more than an interesting local dish. “Putting them on the menu is another tool in the arsenal of protecting the environment,” says O’Hehir. “I find it very interesting that most meat consumed by us has an environmental cost, such as beef that has been raised where there used to be part of the Amazon rainforest. With green iguanas from Cayman, however, it is the reverse. You are helping the environment by removing these animals.”

Though his original processor has recently closed shop and his iguana rillettes are currently not available, Tennant is again working with the Department of the Environment to find another source for green iguanas. “That doesn’t mean that it’s not possible to get it. It just means those who want to serve green iguana, including myself, must stress with the culler the utmost importance of handling the green iguana when it’s being culled,” says Tennant. “Whether it is being euthanized humanely in a facility or being shot with a rifle, proper handling must happen.”

Now, all the effort to balance the iguana population is paying off. Though green iguanas still rule the island, the number of blue iguanas has increased dramatically. There’s both a recovery program and protected nature reserve dedicated to the reptile on Grand Cayman, and the 1,000th blue iguana was released into the wild in 2018, according to Harding. But even off-preserve, it’s now easier than ever to spot the rare, slow-moving lizards lazing about, the sun gleaming off their turquoise skin.

The Republic of Venice Died in 1797. Now You Can Visit It.

The region's first and only locally-run hatchery provides a boost for both fishers and the imperiled royal sea snail.
monuments

In Peru, it has gone from a humble and ceremonial food to a delicacy among urbanites.
animals

The Cute Critter Rewriting Our Understanding of Prehistory

Before cows and chickens, cuscuses may have been the original livestock.
Video • Wonder From Home