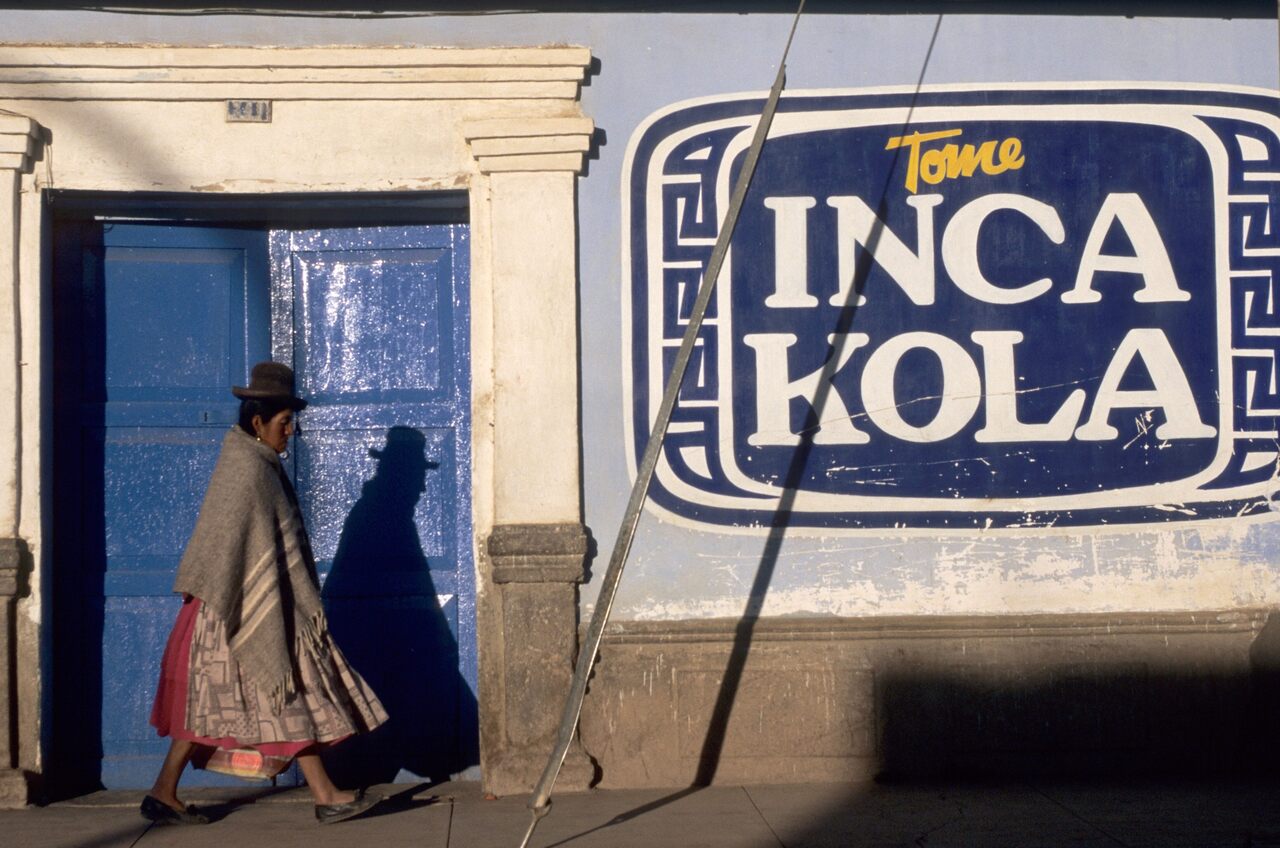 In 1999, the Peruvian press celebrated a decisive victory for their nation over the great avatar of globalized consumerism, Coca-Cola. For decades, the transnational behemoth had tried to become the top-selling soda in Peru. Yet it never managed to surpass a locally beloved brand, Inca Kola. A brew the Chicago Tribune once described as “radioactive yellow” with “a bubble-gum bouquet,” and which Argentine writer Jorge Luis Borges labeled “an implausible drink,” it is one of the only regional sodas Coke never managed to overtake. So the goliath agreed to partner with Inca Kola rather than compete, buying half of the brand and a third of the shares in the local, family-run business. In an act that some read as surrender, Coke’s then-CEO, M. Douglas Ivester, who reportedly loathed Inca Kola, took a swig in front of snap-happy reporters in Lima.

For many Peruvians, 1999’s victory felt especially sweet because Inca Kola had long served as a rallying point for national pride and identity. Peruvian celebrity chef Hajime Kasuga has gone so far as to declare, “Inca Kola runs through the veins of Peruvian babies.” More recently Ben Orlove, an anthropologist who studies Peru, attended a Peruvian independence day celebration at the nation’s ambassador’s residence in New York. At the end of the night, attendees received a tote containing, among other things, a can of Inca Kola. In short, as Tristan Donovan, author of Fizz: How Soda Shook Up The World, puts it, the brand “carries a cultural meaning that goes far beyond the ordinary soda.”

But Inca Kola was never Peru’s only beloved local soda. As Orlove points out, back in the ‘70s and prior, the nation was awash in regional soda brands, many of them with strong local followings. He has fond memories of Pedrin, a soda produced by a small bottling plant in the highland town of Sicuani. So how did the “improbable” Inca Kola become Peru’s national soda, and a successful Coca-Cola competitor?

The classic story runs that, as Charles Walker, a historian who studies Peru, puts it, “on the marketing side, they just nailed it” by constructing a brand that appealed to national pride. Inca Kola launched out of Lima in 1935, during the 400-year anniversary of the city’s founding. Its unique flavor, its creators stressed, was a secret recipe based in uniquely Andean fruits. (Most suspect it’s anchored on lemon verbena, but the exact flavoring remains mysterious.) And its name and original logo spoke to Peru’s strongly claimed Incan heritage.

“Peruvians’ pride about their Incan ancestry can’t be underestimated,” stresses Keith Lang of the food blog EatPeru. “The grand Inca legacy was something to hold onto in times when the country battled poverty, political instability, and sluggish economic growth … It meant a great deal for a country whose citizens often feel, or are made to feel, inferior to other countries.”

Since Inca Kola’s launch, its ubiquitous advertising has seeped into every cultural event and institution—“even little school sports teams,” notes Peruvian anthropologist Enrique Mayer. Starting in the ‘60s, company slogans promoted the drink as the national flavor of Peru and called on consumers to patriotically support them against foreign brands.

But this patriotic branding is, according to some academics and cultural critics, problematic. Inca Kola’s visual ads, especially, tend to portray Peruvians as culturally homogenous and exclude darker-skinned individuals, perpetuating racial and class-based biases. And the vigor with which the brand dips into the well of nationalism can feel odd when one considers that Inca Kola was created by the Lindleys, an English family that moved to Lima and opened a soft drink company in 1911. Before launching Inca Kola, they made citrus sodas using syrups imported from the U.K. and received economic support from the British embassy at least once, in 1918, to help them compete against local soda companies.

Still, Lang points out, Peruvians embraced the cola, as the ads “associated [it] with an improved financial situation and a more modern lifestyle,” which many craved. The Lindleys took pains to portray themselves as thoroughly Peruvian, naming their company’s first iteration after a local saint and adopting Spanish diminutives for themselves. Peruvians are used to people of diverse backgrounds becoming part of national life—recent presidents include a Fujimori and a Kuczynski. And they are seemingly forgiving of things that may seem to outsiders like cultural trespasses or oversteps. Case in point, few Peruvians seem to harbor ill will towards Coca Cola over its historic (and ongoing) monetization of Andean coca leaves, a crop that the U.S. and international bodies otherwise condemn even when it’s being used for traditional purposes rather than cocaine production.

Inca Kola also served as a centralized brand to rally around. Peruvians take great national pride in chicha morada, a local drink made by boiling dark purple corn with spices and fruit and sweetening it with unrefined sugar, as well as chicha de jora, essentially a mash beer made of white corn and often flavored with fruit and sugar—both ancient traditional drinks. But chichas are all but defined by the fact that they are homemade and diverse. Attempts to industrially produce chicha, including Inca Kola’s 2014 introduction of a new “La Mortida” carbonated version, have largely failed.

This rush of nationalistic advertising was seemingly unique among early Peruvian soft drinks. But other sodas worldwide have leaned on national pride to boost their profiles or compete with Coke. Anthropologist Robert J. Foster has written about a number of them, such as Turkey’s Cola Turka, whose manufacturer made even more explicit calls for nationalistic consumption. Yet he says none have had the same success as Inca Kola.

Inca Kola likely benefited from its striking color, which helped it stand out on shelves, and unique flavor. Impossibly sugary, it appealed to a local sweet tooth so strong that Coke reportedly had to up its sugar count to appease it. (“Compared to Inca Kola,” says Walker, “Coca-Cola seems almost subtle.”) Inca Kola has also aggressively promoted the idea that its flavor is the perfect complement to Peruvian cuisine. “People absolutely believe it,” Walker says, although neither he nor any of the other non-Peruvians I’ve spoken to agree with the claim.

But the success story of Inca Kola, Foster and others suspect, is as much about clever and assertive national distribution strategies as it is about taste, marketing, or anything else. Unlike other early local sodas, Inca Kola made a concerted effort to penetrate the entire nation, sending sales reps and product over bad roads into remote outposts. They cut deals with not just large stores, but mom and pop shops, and as Walker recalls, often undercut local products’ prices or offered stores incentives to stock them. (Inca Kola did not reply to a request for comment.) Foster points out that this is essentially the Coke playbook, but Inca Kola launched in Peru a year before Coke, and had home-court advantage.

Inca Kola’s early proliferation and strong brand ultimately denied Coke one of its favorite tools for establishing dominance: exclusive marketing contracts. By the 1990s, both McDonald’s and local fast food chain Bembos had opted out of selling Coke products alone in Peru in favor of stocking Inca Kola. And many chifas, Peru’s ubiquitous Chinese-fusion eateries, served Inca Kola exclusively because that brand got to them first. Thanks to this saturation, Donovan explains, “people have grown up drinking Inca Kola,” and it’s hard to break that casual habit.

Unfortunately for Inca Kola, its unique branding and local distribution know-how have done almost nothing for it abroad. Although it has been distributed overseas since at least 1972, few groups beyond Peruvian expats buy it. Even as Peruvian food’s profile has grown, with famous chefs singing Inca Kola’s praise, its image has not resonated, and its taste remains unfamiliar to outsiders. Coca-Cola’s global hype machine has failed to broaden its appeal as well.

But this too can read as an asset for Inca Kola’s appeal within Peru, argues Walker. Locals can proudly say, “See? They don’t get it. You have to be from here.”

The earliest high-altitude settlement in Africa came as a surprise.
marketingsodaindigenous

Help us keep them coming by directly supporting Atlas Obscura.
Become a Member
$5/month $10/month $20/month
See All Membership Options
Already a part of our membership program? Sign in.
No Thanks
Keep Exploring
bridges

Two Tiny Monkeys Are Critical to Restoring the Amazon, With Their Poop

These tamarins have an affinity for disturbed rain forest.
beer

The mind is a terrible thing to waste.

This tangy fruit flavors everything from ice cream to cocktails.
Gastro Obscura

In Peru, layers of potatoes, meat, and sweets are steamed in a pit filled with volcanic rocks.
Gastro Obscura

The Indigenous Tribes Fighting to Reclaim Stevia From Coca-Cola

Guaraní have long cultivated the plant, which they introduced to a world hungry for natural sweeteners.
Read more