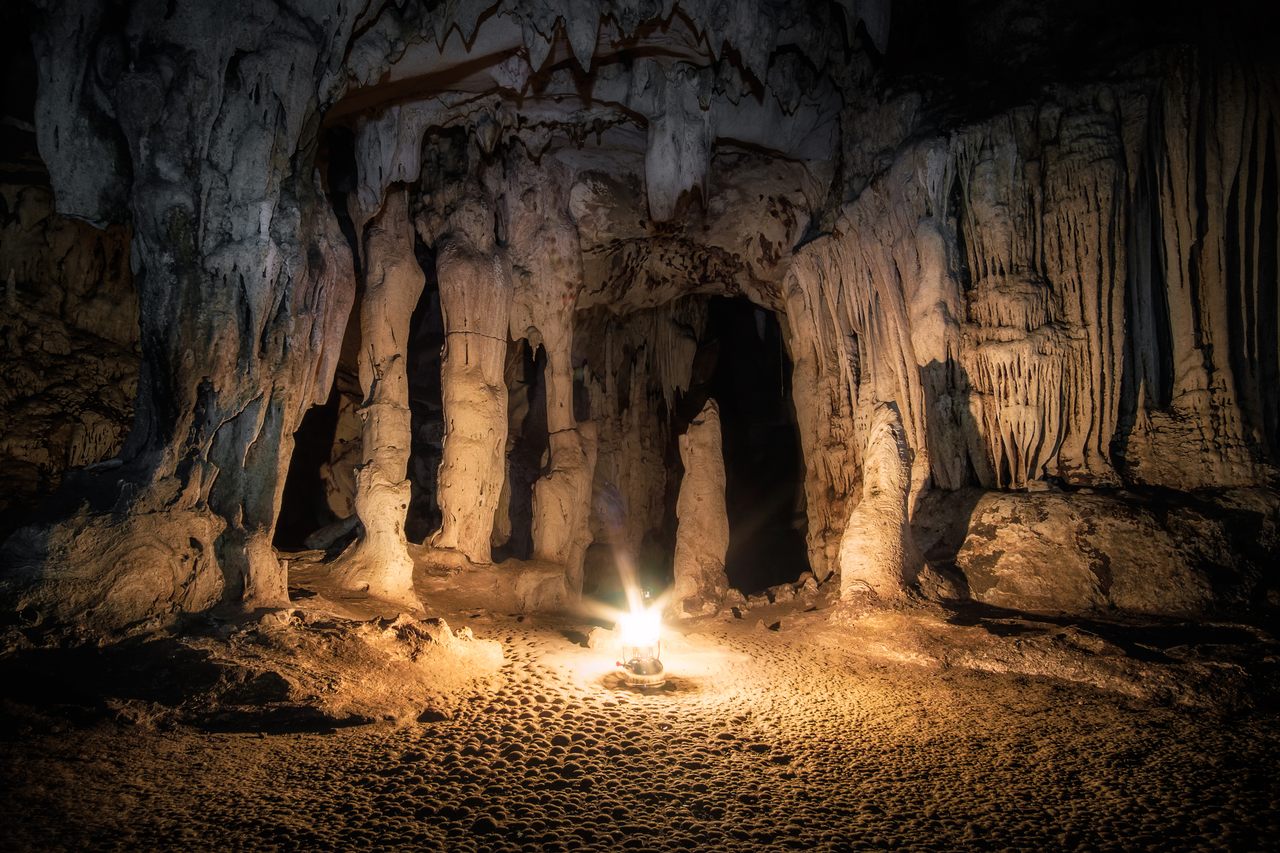 Fire could not illuminate all the dark corners of cave systems that our ancestors explored. Did they rely on echolocation to find their way? Phuvich Chavitrutaigul / Getty Images
In This Story
Destination Guide

A hedgehog and her hoglets scurry across the packed-dirt parking lot where University of Huddersfield sound archaeologist Rupert Till and his team have gathered around their van. They chat casually as they check their gear: headlamps operational, mobile phones charged, helmets properly buckled. It’s a crisp fall day in the Ariège Pyrenees of southwestern France, an area renowned for its high concentration of caves containing paintings and engravings from the Neolithic and earlier periods. But Till and his colleagues aren’t here for the art.

The team hikes up the narrow trail to the large mouth of Bédeilhac Cave, which was used as a military hangar by the occupying Germans during World War II. In the years since, the cave has seen everything from impromptu raves to groups of amateur treasure hunters searching for undiscovered artifacts. But today, Till is searching for something that sometimes seems even more difficult to find in our electrified age: total darkness.

Till has come to this cave to perform an acoustic archaeology experiment on the human ability to use echolocation. “Bats use echolocation, or biological sonar, to locate and identify objects,” says Till, adding that the chirping sound bats make, outside the range of human hearing, would be about as loud as a smoke detector if our ears could pick it up. Till wanted to test echolocation with something humans could hear.

“My idea was to try this with the voice,” he says. Researchers believe that ancient humans sang ritually in caves, but Till thinks the singing may have had another use: to aid in exploring the caves both for safety and to expand the area available for them to use. “I’m curious if humans might still have some remnants of this skill intact, somehow untapped and waiting to be re-used,” says Till. “Can untrained volunteers find their way around pitch-black cave galleries with nothing but their voices?”

To answer this question, Till designed an experiment, found a cave, and enlisted volunteers. He assigned each individual a 20-minute slot, during which they would be alone in a particular cave chamber. The main area had a smaller sub-chamber accessible only through a low, curving passage that, at its narrowest point, was only two feet wide. The participants’ goal was to locate and enter the smaller chamber, using only sound to navigate. After their attempts at echolocation, the volunteers were asked to draw a map of the space. Most were way off.

Till recorded the experiment using a method called acoustic impulse response, which involves precisely measuring and locating the sounds created in the space. Directional microphones, placed around the chamber, can then pinpoint how and where the volunteers’ voices echo, essentially creating an audio map of echolocation.

Initially, the experiment had mixed results, according to Till. “There was a lot of singing, screaming at walls, bumping into said cave walls, and a fair share of spontaneous bursts of laughter,” he says. A couple of volunteers also reported feeling fear, and one had to stop because he panicked. “Dark caves can be scary. And we’re obviously not accustomed to operating in complete darkness the way our ancestors were. A lot of us have never even experienced total darkness and caves are notoriously disorienting.”

However, the experiment participants appeared to adapt quickly, at least to the basics of echolocation. “I think the volunteers got better at not bumping into walls in a very short period of time,” Till says. “You can imagine if this was your only option, you’d hone the skill much more quickly…. We should keep in mind that the ancients were essentially blind half the day, when the sun wasn’t up, and when in the dark inner recesses of caves.”

He adds: “Echolocation is like a seventh sense, which, if I had to guess, is a skill that most have slowly lost through time, maybe because of this lack of true darkness.”

Miriam Kolar, a Stanford cultural acoustics researcher, agrees that human echolocation is likely a lost skill for our species overall—but one that’s not entirely gone. “I know that spelunkers sometimes talk about echolocation as an informally understood technique for sounding out distances and seeking the presence of water,” Kolar says.

Many visually impared people use echolocation on a daily basis, creating what Kolar and colleagues call “auditory localization cues”—usually by making clicking sounds—that echo, or reflect, off physical surfaces. But echolocation is a complex process, and exactly how it works for our species is not fully understood by scientists.

“You could fill libraries with what we know about the human visual system. What we know about human echolocation wouldn’t fill a bookshelf,” says Daniel Kish of World Access for the Blind. Kish teaches echolocation workshops to both visually impaired and sighted participants, but his course doesn’t include the singing that was part of Till’s experiment. “I’ve not heard about anyone using singing to echolocate, at least successfully. I use a percussive click, using my tongue and the roof of my mouth, and this is the technique that I teach, and it seems to be the most effective.”

The participants in Till’s experiment weren’t the first to use song for echolocation in caves, however. Anthropologist and musician Iegor Reznikoff of Paris Nanterre University gained notoriety in 1987 when he claimed he found cave paintings while singing and walking through unlit caverns. He says he’s able to gauge the resonance of the spaces, and therefore their shape and size, with his voice. Through this process, he figured out that the most resonant parts of caverns are where the most cave paintings are located.

Reznikoff says that people who lived in Europe during the Upper Paleolithic—from 10,000 to 40,000 years ago—spent a lot of time in caves because they lived in a very cold climate. “With only torch light available, which couldn’t be carried into very narrow passages, the ancient hunters had to use their voices like sonar to explore the nooks and crannies of a newfound caves,” he says. “Sound reaches much further than light, especially in irregular surroundings.” Singing and its reflected echoes could mean the difference between life and death for these ancient humans. “For example, strong echoes from below may indicate a hole in the cave floor, and an even deeper subterranean chamber,” Reznikoff says.

Echolocation was not a skill unique to Paleolithic Europeans, but documentation of its usage is scant. “There’s some evidence of the Navajo, the Iroquois, the Cherokee, the Acoma people of New Mexico, and the Nuxalk people of Canada using echolocation to determine ritual places,” says University of Barcelona archaeologist Tommaso Mattioli. “But there’s very little work being done on human echolocation today.”

Till has plans for additional echolocation workshops at caves in Northern Spain, but many accessible sites in the area today were also accessible during the Paleolithic—which means they’re now full of irreplaceable cave art. Getting permission to enter a cave and have volunteers possibly banging into walls full of cultural heritage isn’t easy. As a solution, he’s looking into finding unadorned caves or reproducing caves by scanning their interiors and recreating them in lab settings.

“Echolocation has a steep learning curve from my experience, but it seems like we do have some vestige of this skill in our parietal lobes. We just have to find it again,” says Till. “It’s like coming home to our own ability.”

Scores of ancient paintings and other works will soon succumb to the sea—but a passionate team is determined to preserve this 'bubble of memory.'
science

Children and even infants joined adults in making their marks, say archaeologists.
caves

The limestone cliffs harbor hundreds of passages that offer glimpses into the distant past.
Video