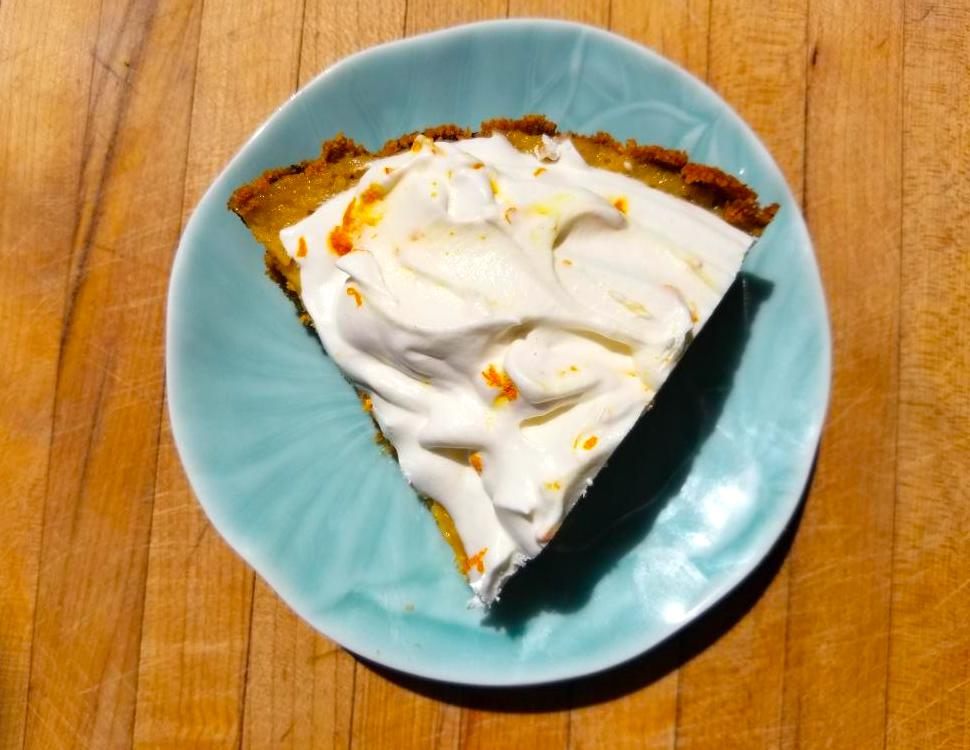 Say hello to the sour orange pie. Anne Ewbank for Gastro Obscura
In This Story
Food

As anyone who’s visited Florida knows, the state’s sweet calling card is Key lime pie. But Key lime’s cousin—sour orange pie—is not nearly as famous in the Sunshine State. And yet, their recipes are almost identical. Both have a graham-cracker crust topped with a tangy, condensed milk–based custard. The only real difference is the fruit that’s supplying each pie’s signature flavor. The story of how one pie was catapulted into the spotlight, while another remained an obscure, though beloved, regional specialty is one of misadventures, clever marketing, and a fruit’s inability to shake its bitter reputation.

Brought by Spanish settlers, sour oranges grow widely and wild across Florida. That’s according to Jorge J. Zaldivar, a tropical fruit farmer, president of the South Florida Palm Society, and a passionate researcher of Florida’s agricultural history. He traces today’s prevalence of sour orange trees to their historical use as rootstock for sweeter oranges.

The sour orange lives up to its name, as well as to its other moniker, the bitter orange. Puckery and astringent, often seedy and small, it is nevertheless a flavor powerhouse used in cuisines around the world. The Seville sour orange makes the classic British marmalade, the Laraha gives curaçao its flavor, and Zaldivar himself often uses sour orange juice to make mojo, a Cuban marinade for meat. The sour orange’s powerfully bitter taste comes from its pungent oils, especially in its rind, which help it stand up better to cooking than the sweet orange.

Florida has long lauded the sour orange as an important local resource. In a 1939 clipping from the Miami Herald, unearthed by Zaldivar, the article’s author cheers on the use of Florida’s sour oranges in exported marmalade, barbecue sauce, and sour orange pie. The author notes the latter is both “a marvelous dessert” and “made much like a lemon meringue pie,” with juice, eggs, and cornstarch as a thickener.

As a local Florida product, then, it would seem that sour orange pie was situated for success. But soon, another citrus pie stole the limelight: Key lime pie.

While the sour orange is the workhorse of the Florida citrus industry, the Key lime is the prize thoroughbred. Small, yellow-green, and fragrant, its fame comes from both legend and clever marketing. Many residents of Key West maintain that their iconic pie was created in the late 19th century by local sea-sponge harvesters who dribbled Key lime juice and condensed milk on bread and allowed the mixture to bake in the sun—a compelling piece of the region’s lore. Plus, while many early recipes for sour orange pie don’t contain condensed milk, the very first known printed recipe for Key lime pie, from 1949, does. Condensed milk companies, over the next few decades, proceeded to print the recipe in cookbooks and on their cans, and bottles of Key lime juice soon joined condensed milk on grocery store shelves.

Sour orange pie has yet to even come close to Key lime’s popularity. But some people are still trying to give the dessert its due. Jeff Patterson is a passionate advocate for the sour orange. His father helped launch the Sour Orange Festival in Lakeport, Florida, in 1992. Patterson agrees with Zaldivar that the humble sour orange is everywhere because of its usefulness as rootstock. “So even though you got Hamlins, Valencias, Parson Browns, navels, and things like that,” he notes, many of these famed Florida orange varieties are rooted to the dirt with sour orange stock. This rootstock is so hardy, in fact, that it can survive brutal freezes, while sweet orange grafts die away when it gets too cold. The result is a tree that produces huge quantities of sour, bitter fruit.

While Lakeport has long had sour orange trees growing wild in its woods and fields, Central Florida experienced several freezes in the 1980s, leaving lots of sour orange trees in their wake. But it was perfect timing. As Patterson recounts, other towns in the area had their own festivals focused on local specialties, from LaBelle’s Swamp Cabbage Festival to Okeechobee’s Speckled Perch Festival. Not wanting to be left out, Patterson’s father and other community leaders decided on sour oranges as their theme, organizing a 1992 fair featuring beef with sour orange barbecue sauce, sour orange cookies, and a cookbook containing a prize-winning sour orange pie recipe.

The festival was met with some skepticism, especially by tree-owners sick of the bountiful but bitter fruit. In an Orlando Sentinel article from 1993, one journalist called Lakeport “obviously the home of optimists,” adding that only a Floridian could “dream up a festival honoring one of the seediest, sourest species of fruit on the peninsula.”

But, much like the sour orange, the festival outlived this cold treatment and just celebrated its 29th anniversary this year. Patterson doesn’t even live in Lakeport anymore, but he still helps put on the event, as he has since he was 10 years old. Though he’s the point-person for the festival’s sour-orange rib cook-off, he’s eager to enthuse about Lakeport’s cold, creamy version of the sour orange pie. The bakers in charge of the pies, now made with condensed milk and topped with Cool Whip, freeze them solid nearly a week in advance of the Sour Orange Festival, where they’re sold out of coolers whole or by the slice.

The same 1993 article that poked fun at the Sour Orange Festival also noted that “the townsfolk hope to make their little fishing burg as famous for its sour orange delights as Key West is for key lime pie.” Almost 30 years on, it’s safe to say that hasn’t happened. For Patterson, though, there’s no comparing the two pies. “I love Key lime pie,” he insists. “I’m a fan. But it’s hard to beat the sour orange pie, especially when it’s nice and cold and frozen.” With its icy texture and what he claims is a tangier flavor than Key lime can provide, “it’s refreshing and it cools you down.”

Zaldivar admits that he has never tried sour orange pie. But while he’s passionately fond of the Key lime for its uniquely Floridian character, “it doesn’t deserve any more recognition than it already gets,” he declares. So recognize the sour orange by making this sweet-tart treat yourself.

Note: Sour orange juice may be hard to find in some regions, and the standard substitute is equal amounts of lemon and orange juice.

1. Preheat the oven to 350° F.
2. With an electric mixer, beat the egg yolks and zest for two minutes. Then, add the condensed milk in three parts, beating for a minute between each addition.
3. Add the sour orange juice, and, using a rubber spatula, blend the mixture until just combined.
4. Pour the filling into the prepared crust, and bake for 15 minutes, or until the pie’s center is set and no longer jiggly. Remove the pie from the oven, and allow to cool completely.
5. Once the pie is cool, make the whipped cream, beating it with an electric mixer until stiff peaks form, adding in the powdered sugar in the last few moments of mixing. Once the sugar has been incorporated, use the cream to top the pie.
6. Chill the pie thoroughly before eating, or, to enjoy it Lakeport-style, freeze it solid before slicing.

When you can't throw a vegetable at a rotten official, call them one.
food

Kannapuram locals are documenting and conserving the many kinds of their favorite fruit.
food

This grand Spanish-Cuban restaurant has been serving customers for more than a century.
De Leon Springs, Florida

Flip your own pancakes in this old sugar mill within a Florida state park.
West Palm Beach, Florida

This shop also boasts some sweet memorabilia from "Willy Wonka and the Chocolate Factory."
Homestead, Florida

The sign that drew attention to a young boy's cucumber stand is now the name of his fruit superstore.
Permanently Closed
Miami, Florida

This shrine to bovine consumption and all things fast food is a slice of culinary history both rare and well done.
Want to see fewer ads? Become a Member.
From Around the Web
THE GASTRO OBSCURA BOOK
Taste the World!
An eye-opening journey through the history, culture, and places of the culinary world. Order Now