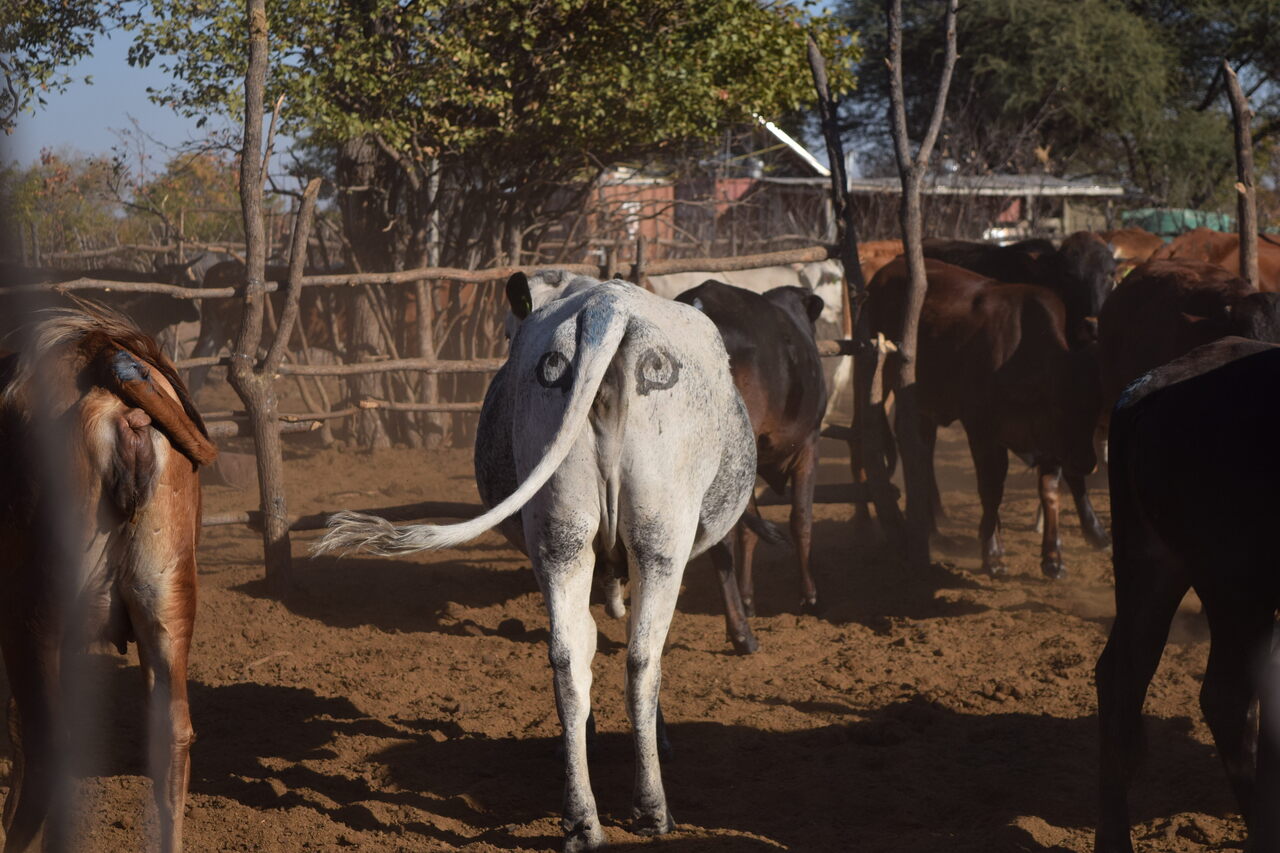 Is that a face or a butt? Northern Botswana's lions, for one, are stumped. Courtesy of Ben Yexley
In This Story
Destination Guide

“Eye spots” are an evolutionary feature employed by various species to deter predators. Insects use them to misdirect birds, and some fish feature false pairs to intimidate larger fish, but no animal has ever been known to successfully deploy eye-spots against larger mammalian predators. Today, however, several hundred cattle in northern Botswana with eyes painted on their butts would beg to differ.

The “eye-cows” are the result of a four-year study released earlier this month by an international team of scientists seeking the coexistence of cattle farmers and lions. And while butt-faced cows may seem like a joke, the problems they stand to solve are dead serious.

Before the eye-cows, the relationship between cattle farmers and lions was one that Cameron Radford, field researcher and PhD student at the University of New South Wales, firmly categorized as “not great.” The team’s research took place in the village of Shorobe, on the outskirts of Botswana’s Okavango Delta region, which contains the Moremi Game Reserve—a 1,900-square-mile wildlife sanctuary home to leopards, hyenas, and, most importantly, lions. While the reserve creates jobs and fuels regional tourism, the ambush predators therein threaten the neighboring cattle farmers’ livelihoods.

“A lot of these farmers don’t have the resources to fence their cattles in ranches, so they’ll release them to roam in the bush untended,” says Radford. “For large predators, they’re pretty easy picking.” For the farmers, recourse was scant: A government reimbursement plan for those who lost cattle to the money-making predators only reimbursed about 10 to 20 percent of the cost of a cow, according to Radford.

“The farmers feel kind of disenfranchised by the whole thing,” says Radford. “It’s their livelihood right there. They’re angry, and they’re going to find that lion.” Retaliatory killings by cattle farmers not only devastated an already endangered species—one that plays a crucial role in balancing a fragile ecosystem—but threatened the local economy as well.

A team of researchers led by UNSW’s Dr. Neil Jordan theorized that in the same way that smaller predators can be deterred by eye-spots, attacking lions may similarly feel they’ve lost the element of surprise when cows grow eyes on their butts. Ending the hunt before it began, the team thought, would be a win for man and animal alike.

What started as a trial experiment on one herd in 2015 expanded with Radford’s assistance to cover 14 different herds with more than 2,000 cows. “We chose herds that had previously reported higher depredation rates, so we knew lions were a problem for them already,” says Radford. Of the group, roughly a third were given a pair of furrowed, acrylic-painted eye-spots (“We were going for the intimidation factor,” says Radford), another third were left unmarked, and the remaining third received simple cross-marks. While 15 unmarked cows and four cross-marked cows were killed by predators, not one of the cows with eye-spots over the four-year study became big-cat food. The low-cost method was enough to turn even the most skeptical of Shorobe’s farmers into believers. “At first they thought it was a joke, but when they saw it was working, they were happy to see us coming back,” says Radford.

While the findings speak for themselves, Radford is quick to explain that it may not be a silver bullet. In theory, the lions may eventually habituate to prolonged exposure to eye-spots (as India’s Sundarban tigers grew wise to the jungle’s loggers, who tried to fend off attacks by wearing masks on the back of their heads), but according to Radford, Shorobe’s lions are migratory enough to be fooled for the long run. Dr. Jordan also admits in a statement that it’s “unclear whether painting would still be effective if these proverbial ‘sacrificial lambs’ were not still on the menu.” For the time being, the researchers recommend that farmers reserve the eye-spots for only their most valuable heifers.

While a local NGO hired a “co-existence officer” to ensure the practice persists upon the team’s departure, a swell of online attention has led to unexpected copy-cat trials abroad. “It’s being adopted in India for leopards, in South America for jaguars, and elsewhere in Nepal as well,” says Radford.

It’s all too rare that an outside-the-box solution proves a boon to the economy and the environment in one fell swoop. But wherever cats need food and cows have butts, the eye-cow method may just do the trick.

A Photographer Turned His Mumbai Window Into a Butterfly Garden

San Francisco’s Newest Bison Are Making Themselves at Home

Why Scientists Are Studying the Dining Habits of Manta Rays

These filter feeders might be a ray of hope amidst microplastic pollution.
science

The Many Reasons Biologists Eat Their Study Subjects

Snacking on specimens from raw monkey to bee vomit can help scientists figure stuff out.
Video • Object of Intrigue

Once the bugs have moved on, termite towers can be used for outdoor bread baking.
Gastro Obscura

Depending on how they're prepared, these caterpillars can taste like everything from tea to a well-done steak.
Gastro Obscura

The spiky, fruit cup-flavored orb made an appearance on “Star Trek.”
Want to see fewer ads? Become a Member.
Related

Local insect farms could save lemurs, baobabs, and more.
Read more
Thanks for sharing!