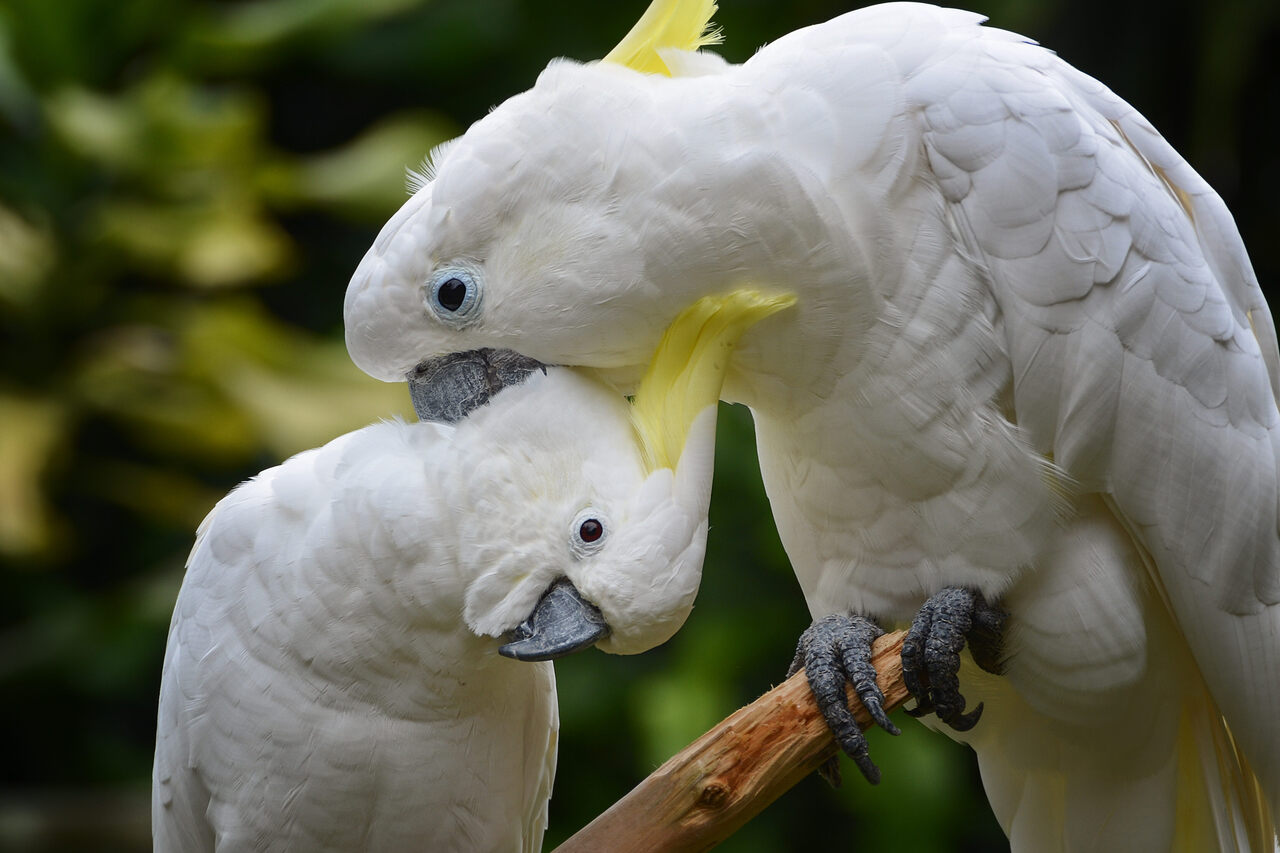 One afternoon in late August, a thunderstorm passed over Hong Kong Park, the 20-acre green in the middle of the city’s financial district. Rain drenched the leaves of the camphor and cotton trees, and every boom of thunder sent flocks of screeching white birds out of the canopy and into the air.

The birds, a two-dozen strong flock of yellow-crested cockatoos, circled in the sky, their bodies bright white against the glossy black windows of the international bank towers. A few settled on the curved arches of the park’s Edward Youde Aviary. One cawed, and the yellow crest for which the species is named jolted from its head like a hoplite’s plume.

Seventy different species of birds from Malesia—a botanical region that encompasses Malaysia, Indonesia, and the Philippines—dwell inside the aviary’s stainless-steel enclosure. Yellow-crested cockatoos are endemic to the same region, hailing from the rainforests of Indonesia and East Timor, but they perch outside the steel mesh. These cockatoos have roosted in the park and wandered freely around the city for decades. Noisy pests to some and a pretty sight to others, they are now also a source of hope for the future of their species.

Today, there are an estimated 200 yellow-crested cockatoos in Hong Kong. Ask a resident about them–or search for a story of their origins–and you’ll learn that during World War II, on the eve of the Japanese invasion in 1941, the colonial governor released all the pet cockatoos in Hong Kong Park’s Flagstaff House, the former home of the commander of the British forces.

“When people are talking about the cockatoos they will talk about the governor, the Second World War,” said Banson Leung, project officer for the Hong Kong Bird Watching Society. But as famous as the story may be, there’s no evidence to back it up.

Several historians of Hong Kong said they had never come across a primary source corroborating the oft-repeated story. Astrid Andersson, a conservation biologist whose PhD at the University of Hong Kong (HKU) focused on the city’s yellow-crested cockatoos, analyzed global pet trade data and combed newspaper archives and bird watchers’ logs but has not been able to find proof of the legend.

The more substantiated, prosaic theory of the cockatoos’ origins is that they are an accumulated population of former pets, released and escaped over time from family homes and bird markets. The earliest record of a cockatoo on the loose comes from 1959, when, according to the Bird Watching Society’s annual report, a cockatoo absconded from a private aviary and was found in the company of jungle crows and magpies, snacking on fir cone seeds.

The cockatoos are popular caged birds. About 13 inches tall with yellow patches like blush on their cheeks, they’re beautiful, and they talk, dance, and play tricks. But their popularity has fueled intense poaching in Indonesia, and they are now critically endangered.

Between 1981 and 1993, 80,000 cockatoos were exported from Indonesia and funneled into the caged-bird trade. By 1993, the wild population stood at an estimated 6,000 globally. Today, even after the Indonesian government introduced a series of laws to reduce cockatoo poaching, there are around 2,000 left in the wild. The remaining birds face habitat loss through deforestation and continued poaching threats. In Hong Kong, though, the cockatoos are protected—it’s illegal to capture them, harm them, or tamper with their nests and eggs—and they live relatively free from the issues that endanger their indigenous counterparts.

“This population, just by existing, is an important population for the survival of the species,” said Caroline Dingle, an evolutionary ecologist and senior lecturer at HKU.

Cockatoos have carved a niche for themselves in subtropical Hong Kong, some 1,700 miles from their Malesian habitat. Their intelligence and sociability have been crucial to their success, said Jessica Lee, assistant vice president overseeing avian species programs and partnerships for Mandai Nature, a non-profit conservation group based in Singapore.

The cockatoos nest in trees that didn’t exist in their original habitat, and eat a wide range of foods, including nectar, flowers, seeds, nuts, and leaves, said Lee. A few birds know how to get food from people in some instances. And they know to find each other.

Individual birds escaped or released years apart or decades apart—the species can live up to 70 years under human care—have always managed to join up with their fellow cockatoos. The squawking helps, Lee confirmed; they hear each other and then “home in on another bird or a flock.”

“A single bird that’s released will always find a flock, because they by nature are social and tactile birds,” said Lee. “They like to be touched, preened by other birds.”

Their gregariousness aids in their adaptability, too, said Lee. There is safety in numbers and sticking together allows for knowledge exchange—a bird that finds a new food source can share the information with the rest of the flock.

The Hong Kong Bird Watching Society conducts guided tours of Hong Kong Park for beginner birders, who thrill to see and hear the birds, said Leung, the project officer. Professionals are always happy to see the cockatoos, but they don’t get nearly as excited, said Leung—the distinctive birds are “too easy” to spot.

The cockatoos haven’t always been a welcome sight. The Hong Kong Park population grew and by the 1980s residents were writing letters to the South China Morning Post claiming the birds were “reaching pest proportions” and destroying trees. But a 1985 government survey found that the cockatoos had caused “negligible” damage. Today, observers “are not very worried about this species in Hong Kong,” Leung said. “We don’t see any competition or any predation from the cockatoo.”

The angry Post readers of the 1980s viewed the cockatoos as an invasive alien species destroying local trees because of the birds’ habit of gnawing on branches to maintain their beaks. But, Astrid Andersson noted, the cockatoos have a “symbiotic relationship” with the trees: beak maintenance for the birds, and a pruning for the trees that doesn’t cause lasting damage. She added that Hong Kong Park is already a “completely altered environment” inhabited by non-native fauna and flora.

“It’s a good thing that anything is surviving in our urban parks,” Andersson said. “We should be supporting it.”

One goal of conservationists is to explore ways that the feral birds can be used in conservation efforts, such as transferring some Hong Kong cockatoos to their native range in Indonesia and East Timor to help seed the population there. But that won’t be feasible unless habitat destruction and poaching abate, said Lee, who works with conservation groups across Southeast Asia to tackle these issues.

“Without addressing the threats, we can’t put any birds back, and that’s why indirectly this population is so important,” said Lee. “Over time, we may see what will be close to extinction of the Indonesian birds, and it may very well be that Hong Kong becomes the cockatoo capital of the world for the yellow-cresteds.”

As fans weigh in on which Katmai National Park and Preserve bear seems plumpest, biologists test a noninvasive method to determine the animals' true heft.
Video • Object of Intrigue