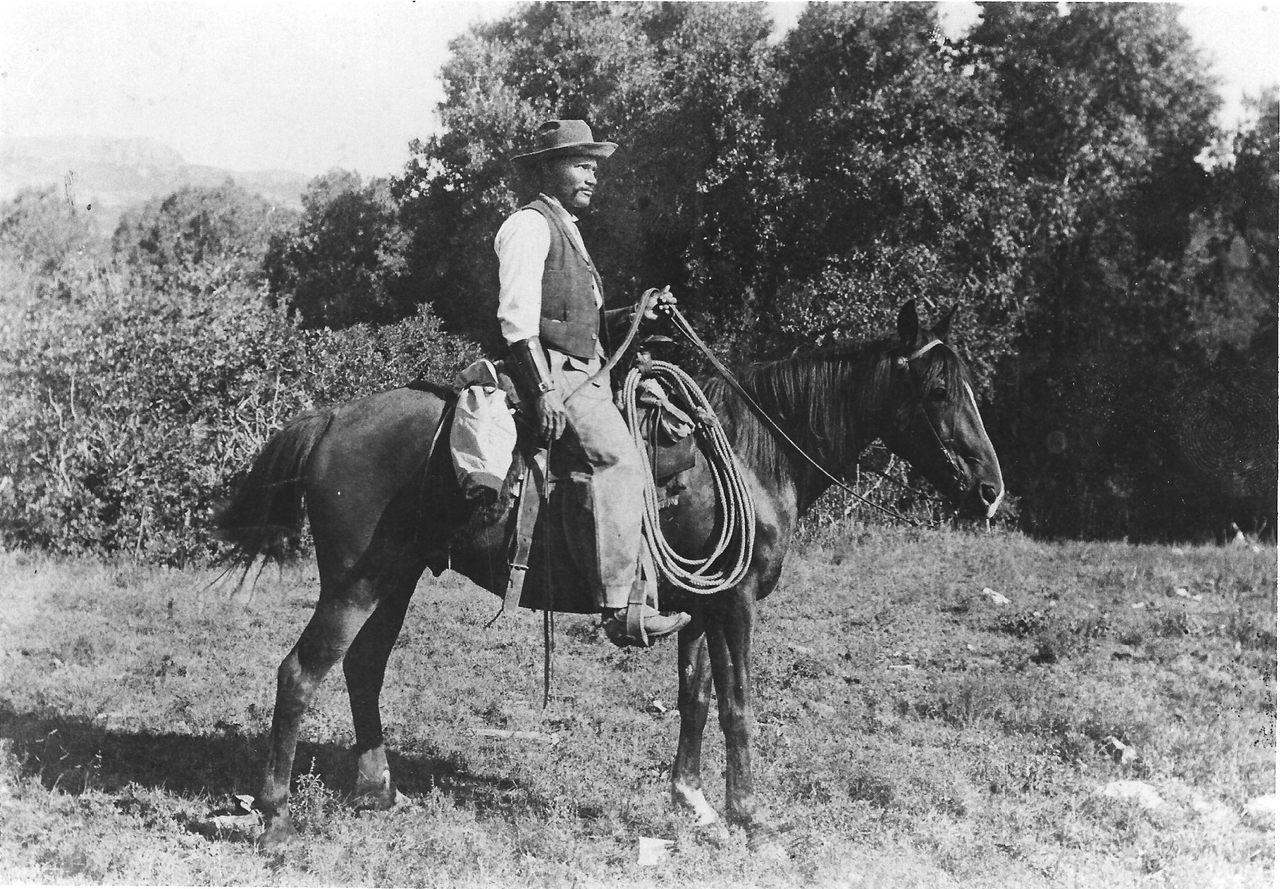 This story was originally published on SAPIENS and appears here under a CC BY-ND 4.0 license.

As a historian of science, I am interested in determining who gets credit for scientific discoveries and why. Sadly, credit often goes to the powerful and connected, not to the people who actually do the work. Gender, race, status, and age discrimination often play a role in these narratives.

Examples of scientific injustice are finally entering more of the public’s consciousness, however. One well-known example is the 2016 Hollywood film Hidden Figures. It tells the story of Katherine G. Johnson, Mary Jackson, and Dorothy Vaughan—three African American mathematicians who were instrumental in the success of the 1960s Cold War space program but did not get the credit they deserved.

January 22, 2022, marked the 100th anniversary of the death of George McJunkin, an African American cowboy in northeastern New Mexico during the late 19th and early 20th centuries.

Why is the anniversary of McJunkin’s passing worth celebrating? Because he discovered what became known as the Folsom site, an ancient bison bone bed where scientists came to accept the idea that Native Americans lived in North America during the last ice age—thousands of years earlier than most scientists then believed. McJunkin is also important to many Black people today because he is one of many historical figures finally gaining credit for their myriad contributions to science, politics, and other disciplines over the centuries. In 2019, George McJunkin was inducted into the Hall of Great Westerners at the National Cowboy and Western Heritage Museum.

But what exactly did George McJunkin discover? A quick Google search on “George McJunkin” yields dozens of articles and books—and their statements range from vague to conflicting.

Many, like a National Park Service brochure, give him credit for making “an incredible discovery that changed the world of North American archaeology forever.” A recent story in Science for the People claims, “McJunkin made a pivotal discovery that resulted in an archaeological paradigm shift worthy of celebration as a ‘scientific revolution.’” An Arkansas Archeological Survey story suggests McJunkin found human-made artifacts at the Folsom site. Others give McJunkin credit for discovering the Folsom site while glossing over the question of whether he knew it contained evidence of ancient humans.

To paraphrase the famous question from the Watergate scandal of the 1970s, it is instructive to establish what McJunkin knew and when he knew it. Only then can we fully appreciate him. Only then can we do his scientific legacy full justice.

George McJunkin was a remarkable man. He was born on January 9, 1851, in eastern Texas. Enslaved until the end of the Civil War, in 1868, he moved to New Mexico to start a new life as a free man and lived there for more than half a century. He was a champion cowboy, an outstanding ranch manager, a self-taught reader and naturalist, and a collector of ancient stone tools, ceramics, animal bones, and other interesting objects he found while working.

On August 27, 1908, when McJunkin was manager of the Crowfoot Ranch, an unusually strong summer thunderstorm dropped 13 inches of rain on Johnson Mesa, several miles northwest and upstream of what we now call the Folsom site. A flash flood swept through the region, wreaking havoc and downcutting arroyos.

After the storm, McJunkin ventured out to repair broken fence lines. He noticed large bones protruding from the newly eroded base of Wild Horse Arroyo. With his knowledge of animals and natural history, McJunkin determined the bones belonged to bison much larger than any modern bison he had encountered. He collected some bones and took them back to his cabin, where they took pride of place on a mantle.

From then until his death, a period of nearly 14 years, McJunkin tried to get friends and associates out to see the site. But none came. The trip required an arduous two-day horseback ride that most were unwilling to endure, and few, if any, people in the region had a car.

Then in 1922, Carl Schwachheim—a blacksmith and amateur naturalist from Raton, New Mexico, whom McJunkin had told about the bones—convinced banker and car owner Fred Howarth to make the journey. On December 10, 1922, nearly a year after McJunkin’s death, the two drove to the Folsom site. They immediately understood why McJunkin had been so excited: The bones were huge and unlike those of any modern animals.

To learn more about the bones, on January 25, 1926, Schwachheim and Howarth met with Jesse Dade Figgins, the director of the Colorado Museum of Natural History (CMNH) in Denver. Several weeks later, CMNH honorary Curator of Paleontology Howard Cook confirmed the bones were those of Bison antiquus, an extinct ice age bison. Figgins immediately committed his museum (now the Denver Museum of Nature & Science, my current employer) to do further work at the site.

Excavation at the Folsom site began in May of 1926. Everyone involved initially believed it was a paleontological dig—not an archaeological dig searching for human-made artifacts. The team’s charge was to look for reasonably complete and intact skeletons of ice age mammals for display at the museum.

That said, Figgins had long been interested in the scientific problem of ancient humans in North America, and he told Howarth and Schwachheim to keep their eyes open for the possibility of finding stone tools. However, it was only that: a possibility.

On July 14, 1926, the team unexpectedly found a stone spear point. It was unlike any other then known. But because they found it in a pile of excavated dirt and not in its original burial context, Figgins knew the archaeological establishment would not accept it as proof that humans lived with ice age animals in North America.

The museum conducted a second excavation season in 1927. On August 29, the team discovered another stone spear point, this time embedded in the ribs of a bison. They left it in place, contacted prominent archaeologists via telegram, and waited for them to visit the Folsom site to confirm the discovery in person.

As I pointed out in a previous column, this was not necessarily a “eureka!” moment. But it did ultimately lead to scientific and public acceptance of the idea that Native Americans were present in North America far earlier than these groups previously believed. It also appeared to confirm what Native Americans had been saying all along—that they have been here since “time immemorial.”

To correct some of the public narrative: George McJunkin could not have known the site he found would revolutionize science. For 14 years, he knew he had discovered an interesting scientific locality based on the unusual bison bones, but he wasn’t aware it contained stone tools, and therefore evidence of ancient humans. Confirmation of that finding happened more than five years after his death.

It is unclear whether Schwachheim or Howarth ever mentioned George McJunkin to Figgins or Cook; neither of the latter men acknowledged McJunkin in their scholarly articles. (Figgins was a registered member of the Ku Klux Klan in the 1920s. It therefore seems unlikely he would have given McJunkin credit even if Schwachheim or Howarth had suggested it to him.)

It is important to celebrate how McJunkin’s initial discovery and advocacy for the site set in motion the later work that led to the new history of humans who lived during the ice age in North America. And it is admirable that a broader public is now celebrating rather than hiding the contributions made by people who too often have been left out of history books. But somewhere along the way, for some reason, McJunkin’s initial find morphed into the subsequent scientific breakthrough.

The earliest scholarly mention I can find regarding McJunkin’s Folsom site work is University of New Mexico archaeologist Frank C. Hibben’s 1946 book The Lost Americans, in which he gives McJunkin credit, without citing evidence, for finding arrowheads at the Folsom site in 1925 (three years after McJunkin’s death), an obvious discrepancy. Archaeologist George Agogino published “The McJunkin Controversy,” a short article in New Mexico Magazine intended to address, through systematic research, what McJunkin actually did at the Folsom site.

In that article, Agogino reviews findings based on archival research and oral histories collected by Adrienne Anderson, Mary Edmonston, Gail Egan, and Mary Doherty in the late 1960s. They confirmed that McJunkin discovered what later became known as the Folsom site. Agogino stated emphatically that McJunkin did not know about artifacts at the site: “[None of the archives] has a single sentence suggesting that McJunkin found, or even considered, the hand of man in the destruction of the bison.”

On the next page, however, Agogino concludes with a sweeping, dramatic, and ambiguous statement: “[George McJunkin’s] discovery at Wild Horse Arroyo was the start of a new and thrilling chapter in American prehistory, the story of the Paleoindian who entered the New World by way of the Bering Strait well over 12,000 years ago.”

To summarize, Hibben opened the door in 1946 to the idea that McJunkin found artifacts and bison bones at the Folsom site. Agogino appeared to close that door in 1971 but reopened it with a scientifically imprecise conclusion. In so doing, he inadvertently set off another half century of uncertainty.

Histories get rewritten all the time, usually when new information comes to light. As a naturalist and collector committed to uncovering hidden histories himself, I like to think McJunkin would want his own story rewritten so that it can be told accurately. In any case, George McJunkin can be celebrated as an extraordinary man whose inquiring mind, intrepid spirit, and perseverance instigated finds that would transform archaeology.

But they didn’t eat our ancestors—probably.
dinosaurs

Fossils unearthed in the Bahariya Oasis tell a story of giant predators hunting on land and in the water.
Video • Object of Intrigue