Found: A Stash of Mystical Charms and Amulets in Pompeii - Atlas Obscura 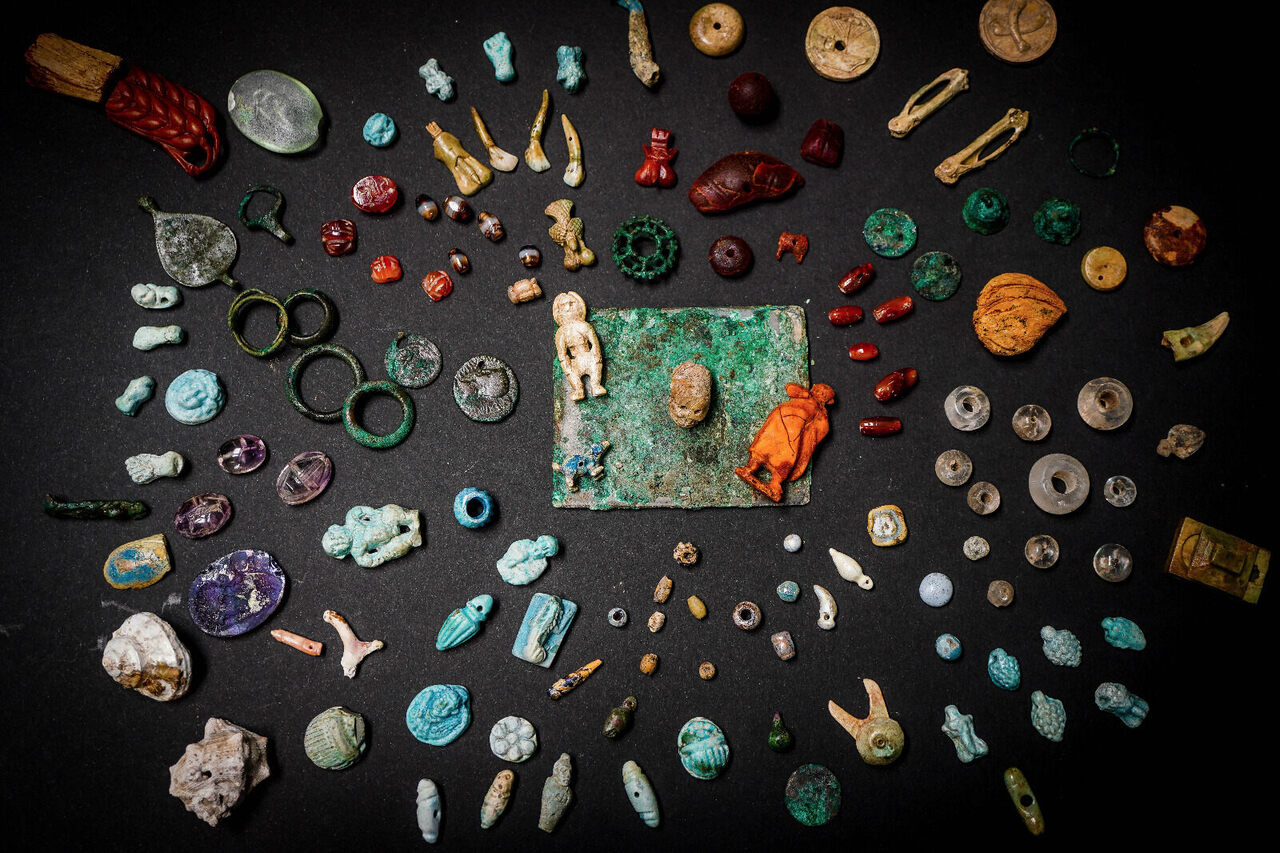 The gems and figures were found in the remains of a villa in Pompeii. Courtesy Cesare Abbate / ANSA
In This Story
Place

The last moments of the ill-fated Pompeiians, frozen forever in plaster.
Place

The walls and streets of the ancient city are peppered with penises.
Destination Guide

When Mount Vesuvius exploded nearly 2,000 years ago, the residents of Pompeii and Herculaneum were directly in its path. Some fled before the explosion, others tried to shelter in place, while still more attempted to flee. All those caught in the pyroclastic flows—fast-moving surges of toxic gas and superheated ash and rock—were killed instantly. (One study found evidence that their blood boiled and their skulls exploded.) Pliny the Younger, famed recollector of the eruption, wrote of a “thick black cloud advancing over the land behind us like a flood.”

The ash encased the cities in time, and every year brings new signs of Roman life. In Pompeii’s House of the Garden, archaeologists have now uncovered a large trove of amulets, gemstones, beads, and pendants, which are believed to have served mystical purposes, alongside the remains of 10 people.

“Imagine you live in Pompeii and you don’t have a cell phone,” says Eric Poehler, a Pompeii historian and archaeologist at the University of Massachusetts, “and all of a sudden you realize your mom’s in one part of town and your brother’s in another part. What do you do? You go home.”

When the volcano burst to life, Pompeiians rushed to their residences to formulate a disaster plan; they were familiar with earthquakes and more. In the House of the Garden, down the street from the home of banker Caecilius Jucundus, 10 women and children took refuge while a storm of ash accumulated at an alarming pace and the searing flows prepared to rush down the mountainside. “You can imagine sitting inside your house and realizing this 10-, 15-foot pile [is building] in your living room,” says Poehler. “And you realize you are being buried alive.”

Near these individuals was a wooden box, since disintegrated, though its metal joints remain in place. In it was a dazzling array of cut gems and figurines. “It’s really a remarkable discovery,” says Drew Wilburn of Oberlin College, a specialist in the ancient Roman practice of magic. “Finding magic and evidence of the practice of rituals like this, it’s pretty uncommon.”

The finds vary in size and suspected purpose. Some are seashells, which Wilburn says symbolize fertility, and small phallic charms that were typically worn by boys to ward off evil. Others include engraved depictions of the god Dionysus and a satyr, as well as a figure of Harpocrates, the Hellenized name for Egyptian god Horus in child form—fittingly, a god of secrets and an embodiment of hope. Wilburn says the number of Egyptian charms in the trove is striking, even for a time when Egypt was under Roman rule. Many of the objects are associated with health, children and fertility.

“It’s a fascinating cache in terms of showing us what these individuals were doing at this time, but also the range of objects that were used in these rituals,” says Wilburn.

It’s thought that the objects did not belong to the Pompeiian upper crust, because they aren’t necessarily tied to the traditional Roman pantheon, and aren’t made of gold—a “good proxy for wealth,” Poehler says.

“If you wanted to venerate Jupiter, you could walk to the largest temple in town,” he adds. “These are a collection of items that people are accessing powers outside the standard set of powers.”

It took seven years to evacuate all the goannas, echidnas, and venomous snakes.
volcanoesromanrites and ritualsreligionarchaeology
Keep Exploring
temples

From Kushites to Christians, an old site in Sudan has new stories to tell.
archaeology

Some associate him with a real-life Asterix, though less successful in resisting the Romans.
ancient

When Garbage Collection Stops, Your City Might Be in Trouble

A Byzantine trash heap reveals the slow decline of a desert culture.
volcanoes

Where Did All the Refugees From Vesuvius End Up?

Their quest for new lives wouldn't have been that different than that of refugees today.
Video

Activists envision a bloodless future for the annual Dashain festival.
Read more
Thanks for sharing!