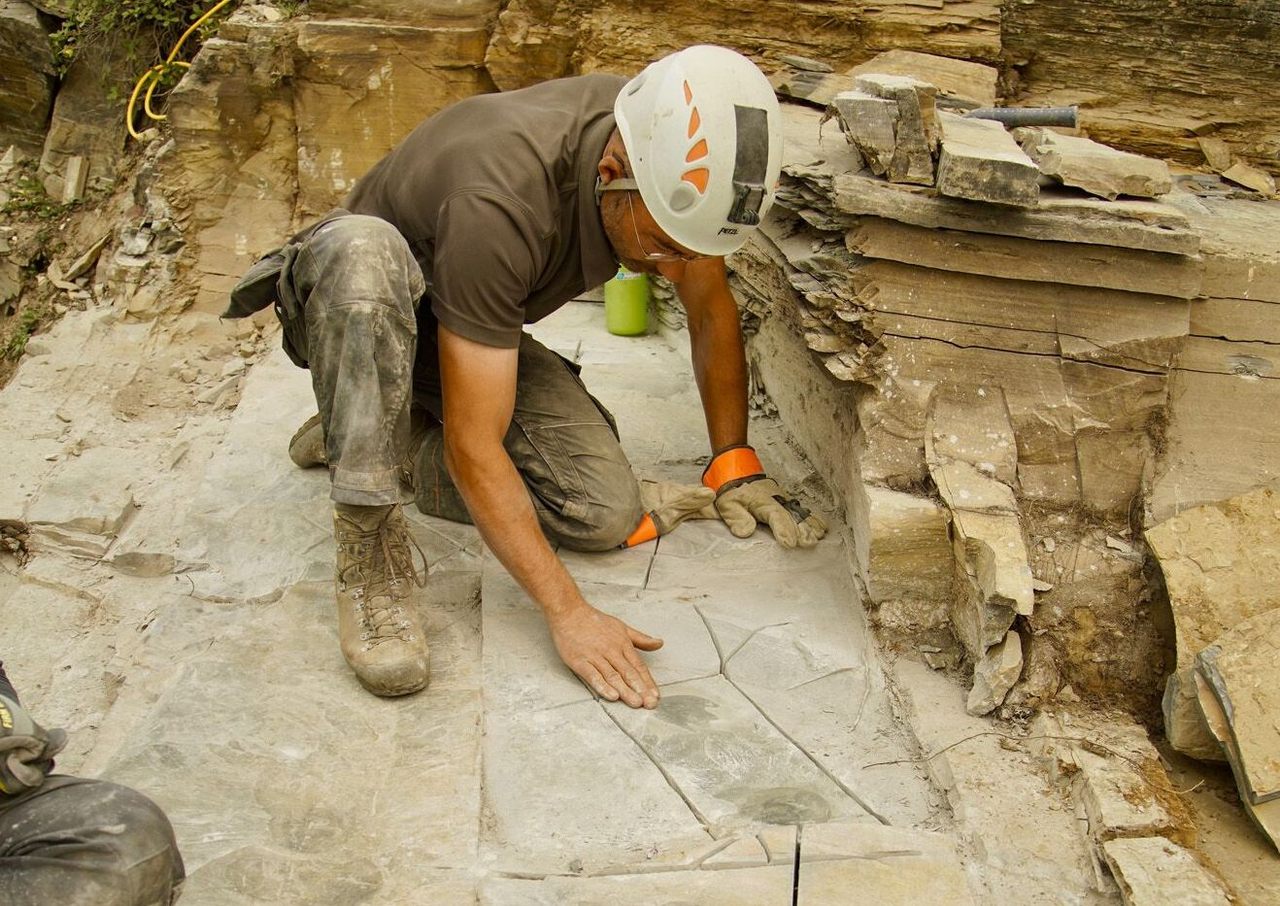 During Earth’s Cambrian explosion, around 550 million years ago, life made its big leap forward, and the diversity of species expanded many thousands of times over. The period was so significant to the development of life as we know it that all the time prior to it—seven-eighths of the planet’s 4.6 billion–year history—is referred to as “Precambrian,” as if it was just a preamble to when things got really interesting. Known most for species such as the innumerable and kind of charismatic trilobite, life in the Cambrian was a crowded smorgasbord of bizarre, alien-seeming species. This week, scientists announced the newest addition to the Cambrian wunderkammer, found in Canada’s high-altitude Burgess Shale fossil deposits: Cambroraster falcatus, a vacuum-sucking, carapace-wearing, UFO-resembling, filter-feeding arthropod.

“We’re used to seeing bizarre animals at the Burgess Shale,” says Joe Moysiuk, who first joined the Royal Ontario Museum’s excavations on the site in 2014, “but Cambroraster was a real oddity.” In the Cambrian, that’s saying something.

The Burgess Shale sits high in the Canadian Rockies, with exposed portions in Yoho National Park, about 500 miles from the sea. Despite being a world away from today’s oceans, it’s proven to be a trove of aquatic creatures from the deep, deep past—through a combination of plate tectonics and lots (and lots) of time.

“Burgess Shale creatures were living at the edge of the continental shelf, in moderately deep water,” says Moysiuk. “In the long time since the Cambrian, North America has moved from close to the equator to where it is now, and the Rocky Mountains have been pushed up by the moving plates.”

In the formation, ancient marine fossils seem to tumble off the mountainside like massive dandruff flakes. The researchers in Canada have since found dozens of Cambroraster fossils since the first specimen; the animal was just fortunate to have died there—otherwise it’s unlikely to have been preserved at all.

“It’s not an ordinary fossil site,” says Moysiuk. “At the Burgess Shale we also get preservation of soft tissues, eyes preserving, nervous systems and digestive tracts, sometimes even holding the animal’s last meal.”

When Moysiuk’s team uncovered the first known Cambroraster fossil, they weren’t sure what they were looking at. As they found more, each fossilized in a different position or different angle, they were able to get a fuller picture of the hand-sized creature. That’s how it often works with these unusual, very ancient animals: piece by piece. “We were able to piece it back together, jigsaw puzzle–style,” says Moysiuk.

Along with its shell-like carapace, Cambroraster also had a circular mouth, with featherlike sweepers that Moysiuk speculates helped pull food to its mouth. It wasn’t huge by today’s marine animal standards, but Cambroraster was a giant of its time, and would have fed on smaller creatures on the ancient seafloor. Due to the shape of its exoskeleton, the animal was originally nicknamed “the spaceship.” The researchers went with it, so when the time came to give it a scientific name, they turned to one of the most famous spaceships ever imagined, and called the species C. falcatus.

“We knew we had to keep the nickname,” says Moysiuk. “It just looked like the Millennium Falcon.”

The ancient relative of a popular (but invasive) pet.
science

The monstrous menace known as Whatcheeria hints that our distant ancestors may have been more like us than we thought.
animals

From a flightless giant heavier than a polar bear to a super-glider with a 24-foot wingspan, avians ancient and modern compete for the crown.
dinosaurs

With a ‘Swiss Army knife’ head, tiny arms, and no relation to T. rex, a new dino find is providing intriguing evolutionary insights.
Want to see fewer ads? Become a Member.
From Around the Web
THE GASTRO OBSCURA BOOK
Taste the World!
An eye-opening journey through the history, culture, and places of the culinary world. Order Now