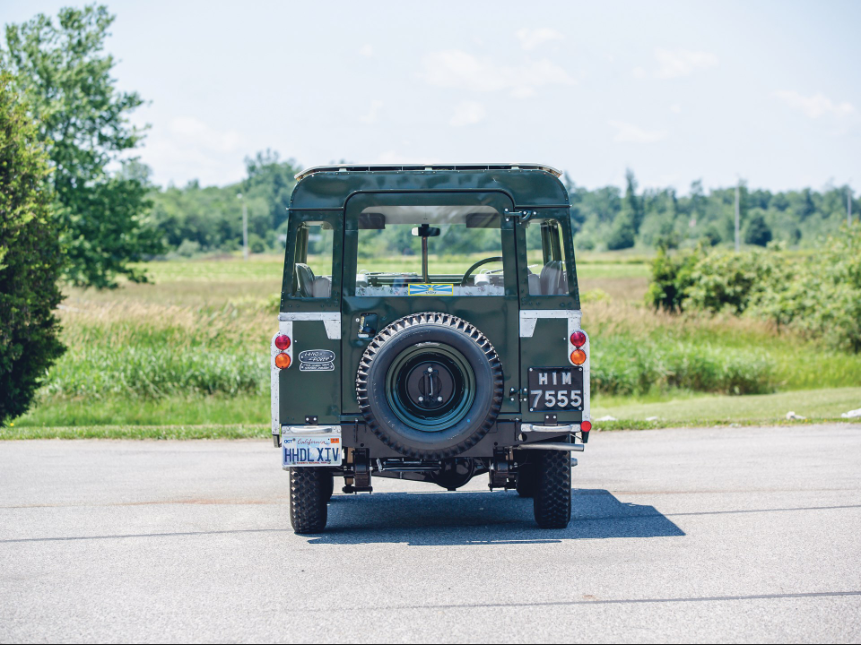 When Michael Green opened up the enormous shipping container that held the 14th Dalai Lama’s 1966 Land Rover, what he saw was a hot mess. The entire left side of His Holiness’s car was smashed up, and needed a new door; the front needed a new fender. “It was kind of comical,” says Green, the owner of West Coast British, a Land Rover repair shop based in Livermore, California. “It was pretty hammered.” The car had just arrived after a harrowing two-year-long journey from India. It had been shipped to Los Angeles by mistake, and had to be hauled up to the Bay Area in a flatbed truck. Now impeccably restored, the car is up for auction at RM Sotheby’s starting August 29.

Although he never drove, Tenzin Gyatso, better known as His Holiness the 14th Dalai Lama, had a sick set of wheels. The 1966 Land Rover Series IIA was delivered to Nepal on February 17, 1966, and became His Holiness’s official vehicle. While slick, the Land Rover was not chosen for its style. Only a 4x4 could easily traverse the unpaved and rocky roads winding throughout the Dharamsala region of India, Nepal, and the Himalayas. The Land Rover served the Dalai Lama for ten years of his exile in Tibet, and was primarily driven by the Lama’s brother, Tenzin Cheogyal. In 1976, the vehicle was retired. (After that, His Holiness upgraded to a Range Rover.) It was maintained by Cheogyal until 2005, when it landed in Green’s shop for a well-needed restoration.

According to Green, the Land Rover was shipped to the United States at the request of a local man who frequently volunteered in Tibet, and who thought it would be cool to drive the Dalai Lama’s car around his winery. “I gave the guy a number and his eyes rolled back in his head,” Green says. “So he backpedaled and donated the car to the Dalai Lama Foundation in Palo Alto.” The foundation paid more than $49,000 for Green to restore the car. Though it had almost no rust, the car was nearly a wreck. “They must have been parking by feel,” Green jokes, referring to the crumpled metal of the car’s left side. But when he first turned the key in the ignition, it started right away.

The Land Rover came with original paperwork from India, which shows that the vehicle was registered by “His Holiness the Dalai Lama.” It also teemed with strange and shoddily maintained tools, such as a wheel wrench. “Someone welded together and repaired that wrench God knows how many times,” Green says. “But when I asked Tenzin, he said I could have it.” The car also carried a distinctive odor, especially on hot days. “They smoked like fiends,” Green says, noting that the car’s headliner was entirely stained by tobacco. “I don’t know if they got the good stuff, but whatever it was, you sure could smell it.”

Near the end of process, Green repainted the overhauled car in the same Bronze Green color the car had upon its original manufacturing. They polished up the original license plate, which, rather accurately, read: HHDL XIV. Tenzin Cheogyal came into Green’s shop three times to check on the restoration. “He was quite the giggle,” Green says. “He kept saying that he’d hire me to be their driver!” Green, alas, did not take the job.

As a child in Tibet, the Dalai Lama was fascinated by science, according to an op-ed he wrote for The New York Times. He regularly disassembled and repaired toys and, once he got older, took apart an antique automobile. Green says the 1966 Land Rover seems to have been spared such investigations.

When the car was finally restored, the Dalai Lama Foundation auctioned the car off on eBay, in a package that included a three day Buddhism study session with the Lama in India , as well as an “up and close personal meeting” with actress Sharon Stone, according to the blog Rover Parts. The winning bid was $82,100. The car has remained in private hands since then.

When asked why the 2007 sale of the Land Rover included a meet-and-greet with Sharon Stone, Green seemed puzzled. But he did say that the Dalai Lama had a slew of celebrity fans who might have snapped up the car had they learned it was on the market. “I should have sold it to Richard Gere,” Green says. “He was the one I knew would have wanted it.”

This time around, Sotheby’s estimates that the car could fetch $100,000 to $150,000 at auction. Green says he just has one hope for the future buyer. “Just because a car is worth thousands of dollars doesn’t mean you should only take it out for car shows,” he says. “I would have driven it all over the place. That’s what it’s for.”

Innovative photographers James and Lucy Lo created a time capsule of a sacred space at a vulnerable time.
caves

An anthropologist’s research on water insecurity reveals how clean water can reinforce a community’s physical and spiritual health.
monks