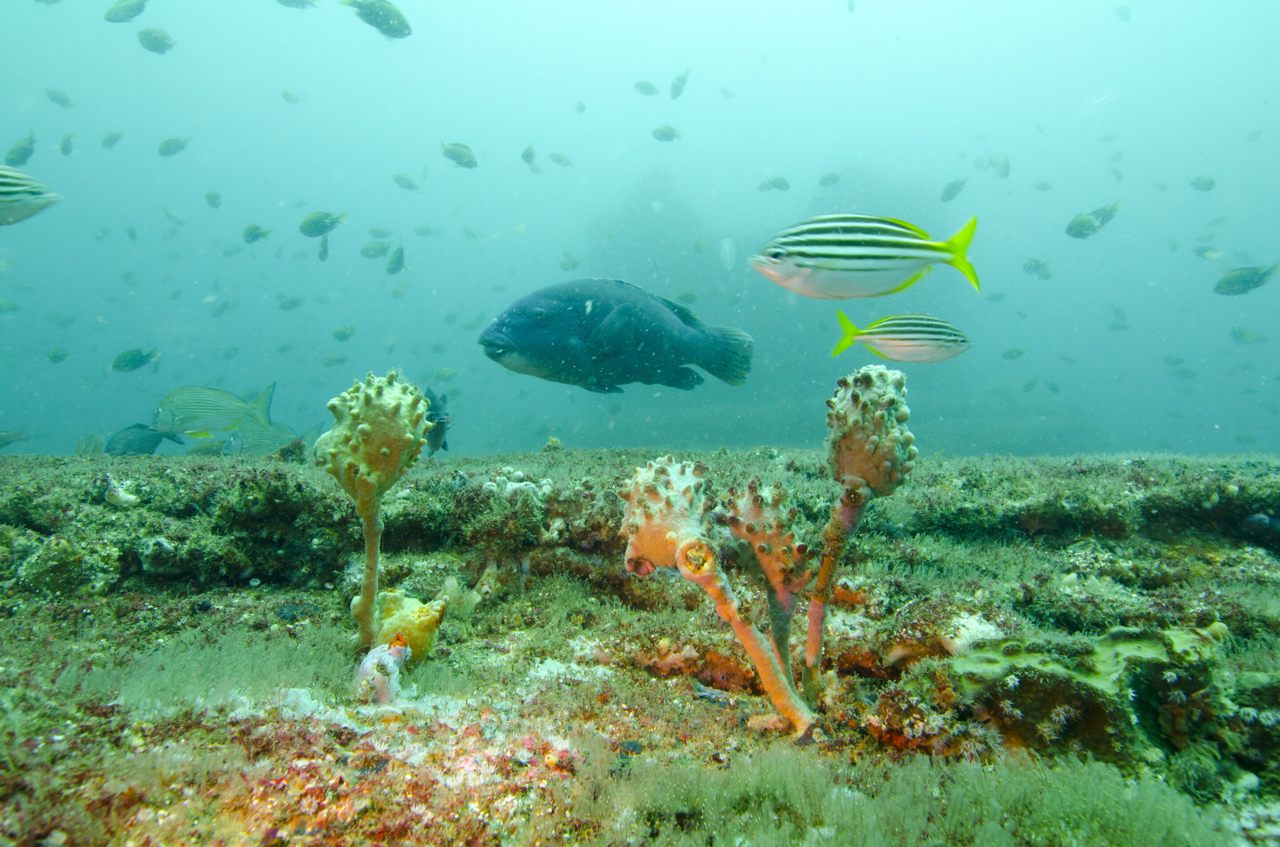 A group of fish loitering around the discharge of the Sydney Desalination Plant. McLennans Diving Service
In This Story
Destination Guide

In 2019, Australia ushered in the new year by shooting off fireworks and restarting the Sydney Desalination Plant. The plant began sucking in seawater, purifying it through a process called reverse osmosis, and producing a flood of clean drinking water for residents of the drought-stricken city. What was left—a blend of wastewater with twice the salinity of the sea—was pumped back into the ocean.

Brendan Kelaher, a marine biologist at Southern Cross University, suspected this extra-salty discharge might drive away fish populating the area. But, surprisingly, many fish flocked to it, creating a mini metropolis in a reef just outside of Sydney, according to a study Kelaher published December 18 in Environmental Science & Technology.

2019 was Australia’s hottest, driest year on record, and New South Wales, whose state capital is Sydney, has faced a crippling drought since 2017, according to The New York Times. In 2010, the city built its desalination plant, one of the largest in the world and capable of meeting a sixth of Sydney’s annual freshwater needs. The plant turns on whenever water levels in the city’s dams sink below 60 percent, indicating a need for an extra source of freshwater, according to the Australian Broadcasting Corporation. Today the plant provides approximately 66 million gallons of drinking water a day, according to the study.

Scientists have long worried that the super-salinated discharge from the plant would have adverse effects in the surrounding environment, a rocky reef around 328 yards offshore and 26 yards below sea level. Kelaher began studying the wildlife in this area over a decade ago, as part of an environmental survey the government required to approve the desalination plant’s construction, he says. From everything he’d read, he expected the surrounding wildlife to be driven away. In 2005, researchers studying the salty discharge of the Alicante seawater desalination plant in Spain found an overall decline in marine life, with fewer echinoderms occupying seagrass beds near the discharge outlets. In 2018, another group of researchers studying another desalination plant observed fewer polychaetes, mollusks, and crustaceans than expected in areas surrounding the plant.

But in this case, Kelaher’s team of divers found an unexpected abundance of fish, both midwater swimmers and bottom dwellers. They visited the site over the course of seven years, including periods when the plant was not operating, and recorded video footage to count fish at designated spots approximately 1.2 to 5 miles away from the saline outlet. Kelaher found a whopping 279 percent increase in the number of fish when the plant was in operation, as well as an increase in the diversity of species. Some of the most common fish at the scene were one-spot pullers, blue-gray fish with a distinctive white spot, and grey morwongs, green-gray fish with rather lush lips. Kelaher was surprised that “the environmental consequences associated with such significant point source discharge were small and localised,” he writes in an email.

Though the researchers aren’t sure why the fish are so drawn to the salty plumes of water, Kelaher has an initial guess. “The turbulence is probably attracting fish,” he says, adding that disturbances in the water column often come with increased food availability. (The mixing of particles into the water often dredges up microscopic organisms once buried in the sand.) But unlike these other disturbances, the desalination discharge is unlikely to offer any more food or nutrients, Kelaher says. In other words, the turbulence could be a red herring for the fish. “But more research is needed to isolate the cause,” he adds. The study did not address how this discharge could affect marine life other than fish, such as zooplankton and invertebrates.

Meanwhile, an abundance of fish is likely to attract an abundance in fishermen. The desalination site has no special protection, and Kelaher says it could function similarly to offshore artificial reefs that the government has installed to enhance recreational fishing opportunities.

Even if they don’t appear to harm their aquatic neighbors, desalination plants aren’t benign additions to the block. The plants require a lot of power, which generates greenhouse gases and contributes to global warming. And while the plants suck in fresh seawater, they also gobble up and kill small organisms like fish larvae and plankton, according to Yale Environment 360. If you’re feeling salty, you’re not alone.

Tarpon, a powerful game fish, helped make the state a tourism hub more than a century ago.
music

The Language Used Only by Lake Kivu's Fishermen

As they paddle out each night, they sing in a disappearing language.
oceans

Scientists are trying to keep one of the world’s last great wildernesses intact.
astronomy

You can thank the moon's gravitational pull for these nine extraordinary sights.
Video