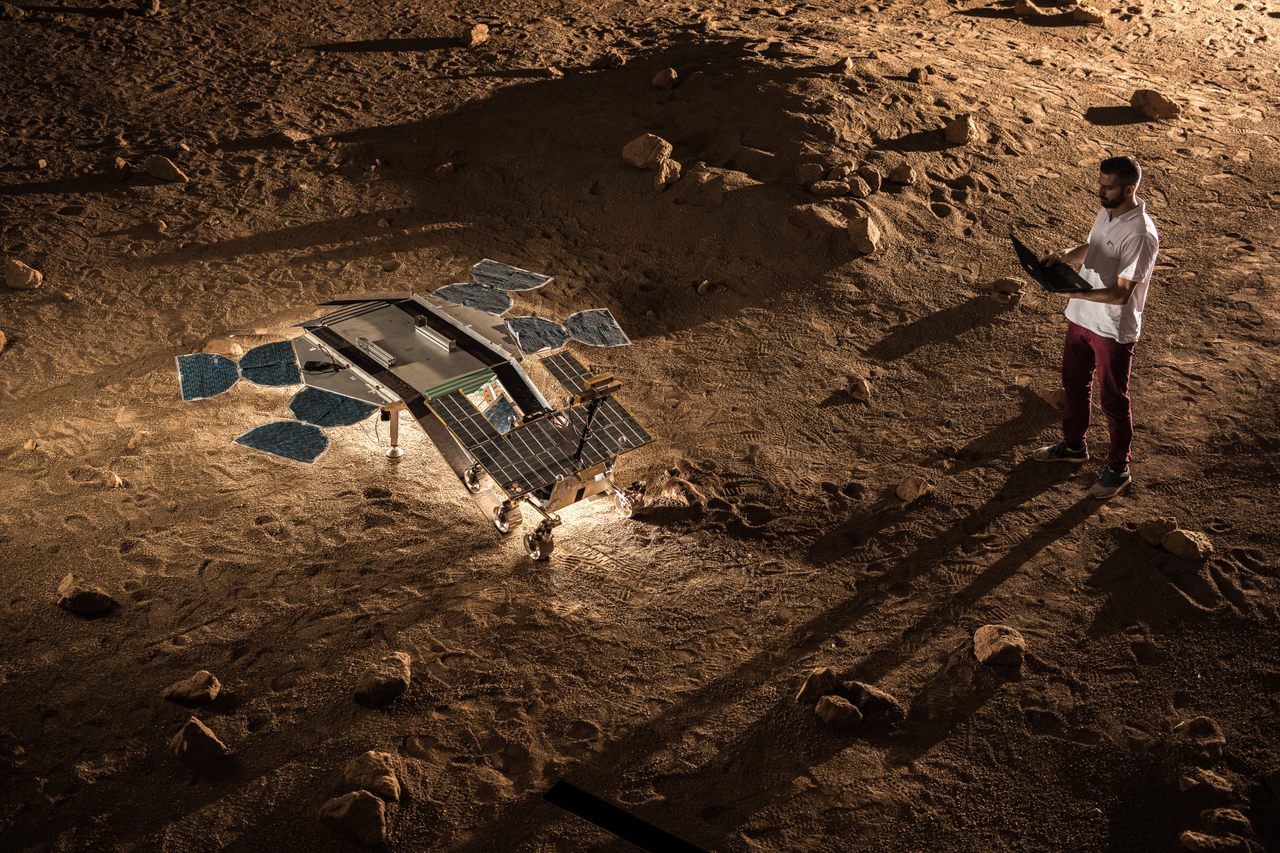 A mockup of the ExoMars rover rolls off its landing platform at the Rover Operational Control Centre near Turin, Italy. The facility is designed to simulate what conditions will be like on Mars when the actual rover, named Rosalind Franklin, arrives in 2022. ©ALTEC
In This Story
Destination Guide

Probably never before in the history of the industry has a maker of bridge cranes—the kind that are mounted on a gantry—been asked to slow one of its machines down. There’s a practical reason for that: The machines are usually used in factories and warehouses to move heavy things around and, after all, time is money. But the world of science doesn’t cling to the same view of time. “We contacted the company in charge of the bridge crane to ask for a slower system,” says engineer Diego Bussi from ALTEC, a joint venture between the Italian Space Agency and company Thales Alenia Space. “All the other companies are trying to get it faster, while we needed the opposite.”

Bussi coordinates a team of 20 who are working to build, test, and tweak Europe’s new Mars Yard—a 3,400-square-foot installation on the outskirts of Turin in northwest Italy. There, every detail has been meticulously crafted to simulate a small patch of the surface of the Red Planet. Officially, it is called the Rover Operational Control Centre, or ROCC.

The bridge crane plays a vital role in the testing activities at ROCC, leading up to a Mars mission currently scheduled for October 2022 that will search for evidence of life on our nearest neighbor. Rosalind Franklin—the rover is named for the chemist whose work on uncovering the structure of DNA was unacknowledged until after her death in 1958—will drill deeper than ever for long-lost Martian secrets. Now, on Earth, two mockups, known as Bryan and Bruno, stand in for Rosalind, and that’s where the bridge crane comes in. The mockup rovers are attached to it by an umbilical that gently lifts each robot as well to simulate Martian gravity, which is about 38 percent lower than Earth’s. And here’s where the slow speed matters. The rover is intended to move at between three inches and six feet per minute. Few factories would want or need such a sluggish pace from a gantry crane.

Rosalind Franklin and the ROCC facility are part of an ongoing cooperative mission called ExoMars, developed by two space agencies, European (ESA) and Russian (Roscosmos). ESA owns the ROCC and the rover, while Roscosmos provides the launch and the landing platform. ExoMars has been active on Mars since 2016, with the Trace Gas Orbiter satellite studying the Martian atmosphere. Rosalind Franklin was expected to depart, for at least seven months working on the Martian surface, in 2020, but the COVID-19 crisis slowed things down. While policies have been implemented to continue work there, the launch will now have to wait until the next window when the two planets are close together.

To set Rosalind Franklin up for maximum success, the ROCC’s Mars Yard (officially the Mars Terrain Simulator, or MTS) has been turned into an ultimate playground for engineers, with features not found in similar facilities in Europe and the United States. Filling the 65-by-52-foot area is 150 tons of reddish soil that was excavated from near Naples: volcanic material spat out ages ago from Mount Vesuvius. This powdery dirt is named pozzolana after the city Pozzuoli, in the hellish Phlegraean Fields, one of the most seismically active volcanic landscapes on Earth.

Romans extracted these fine-grained sands to manufacture a superior cement for their temples and monuments. Twenty-first-century engineers have found it just as useful as a base for simulating Martian terrain. But the Red Planet doesn’t have a consistently smooth surface, and rocky places can send a wheeled robot to an early grave by getting it stuck or overturned. But that’s just where the most interesting research targets are. “It’s where scientists want to go because water flowed there in the past,” says Lorenzo Bramante, the technician responsible for the Mars Yard. So a whitish soil called rain quartz was brought from Germany to help reproduce the ancient seabeds that Rosalind Franklin will target. Boulders of various sizes are spread around, alongside with ramps, hills, slopes, and crevices to simulate a few more dangers to the rover, and help train operators on how to overcome them.

The yard is surrounded by dozens of cameras, which make it resemble the set of some strange interplanetary reality show. The cameras provide another feature distinctive to ROCC: The ability to create a digital version of anything inside the arena—or the whole landscape—in a matter of minutes. “This is important because we can change the configuration depending on what we will face on Mars,” Bramante says, “then really quickly our digital elevation model gets updated to current scenarios.”

For the mission to be a success, the ESA needs to be confident that it can handle a rover on the surface—to date the only successful Mars rover missions have been American. “This mission is a challenge for us since we have no past experience,” says Thales Alenia Space engineer Paola Franceschetti, who is leading a team to plan everything the rover will do after leaving Earth. With so much at stake, everything has to follow a script, and Franceschetti is in charge of defining this very strict set of actions, also known as the activity plan. “I was very bad in the requirements,” she acknowledges.

Even the lighting on the yard was conceived to mimic the conditions on Mars. Twenty-eight special adjustable lamps can reproduce Martian luminosity from sunrise to sunset. There is a drilling platform to simulate the levels that the rover might drill through—it will be able to go six feet or more deep to collect samples, deeper than any rover before. “Surface soil tends to be not very good to search for life because of the influences from the atmosphere,” says Franceschetti.

The facility also has a tilting platform filled with pozzolana that can create up to 30 degrees of inclination. According to Bramante, everyone was concerned that the full tilt, designed to simulate what would happen if the rover landed on an incline, would create a reddish avalanche. So the team performed the test on a Friday evening, when nobody was around. Thankfully, nothing collapsed.

There will eventually be a lot of scientists wanting input on where Rosalind Franklin will go once it touches down, and the operators and engineers need to be ready for that. “If, let’s say, a scientist wants to climb a rock bigger than 20 centimeters, the engineering expert has to say, ‘No, we can’t, because this jeopardizes the mission,” says Franceschetti.

If something goes wrong on Mars, the Mars Yard will spring into action again—simulating the problem to test ways to overcome it. “We have from eight to 10 hours to collect the data, understand the problem, reconfigure the MTS to reproduce it, put the [mockups] in that condition, and react to find a possible solution,” Franceschetti says. “Our timeline is tight.”

Bramante doesn’t hide his pride in the facility he helped build. “There are plenty of Mars yards out there, but this platform, all this equipment, and also the digital capabilities, put this facility as unique among others,” he says. NASA personnel seemed to agree, after a visit. (NASA’s yard at Caltech’s Jet Propulsion Laboratory in Pasadena is smaller, but back then the rovers were smaller, too.) Yet another difference between this facility and others—including NASA’s and locations in Iceland NASA is currently using to test its next Mars rover, Perseverance—is that it is indoors. Conditions are going to be much more hostile on Mars, but Rosalind Franklin ought to be ready for them—or whatever obstacles come up—from its training on ground formed by Vesuvius nearly 2,000 years ago.

Found: A Letter From Frederick Douglass, About the Need for Better Monuments

Often associated with Earth’s hottest places, these whirling columns show up on all seven continents—and beyond.
space exploration

Why Does This Picture From Mars Look Like a Riverbed on Earth?

A familiar sight, millions of miles away.
science

Cassini isn't the first space probe to go out in a blaze of glory—and it won't be the last.
science

A View of Saturn's Rings From the Inside, Courtesy of Cassini

The 20-year-old satellite is still sending back images during its swan dive into the planet's atmosphere.
Video • AO Docs