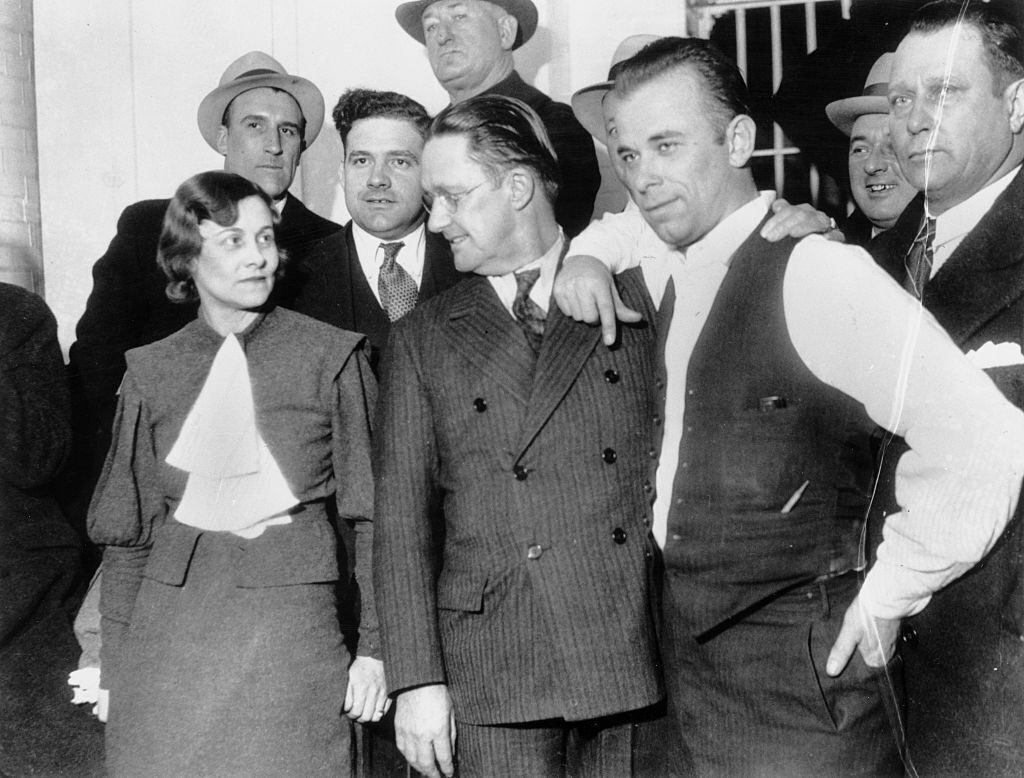 Dillinger (right, in vest) was notoriously charismatic, even when surrounded by cops. Bettmann / Contributor
In This Story
Place

The body of one of the world's most famous outlaws is covered in cement and iron to prevent it from being stolen.
Destination Guide

No one’s sure what, exactly, is beneath John Dillinger’s headstone in Crown Hill Cemetery, Indiana. His bones, most likely (though some think otherwise), but since days after his death in 1934, rumors have swirled that there’s also a lot of concrete down there, too. It’s said that he was buried under slabs of it or encased in it entirely as a security measure, to discourage ambitious fortune hunters, fanatics, and body snatchers.

John Herbert Dillinger had pistol-popped and prison-hopped his way into American folklore over a frenetic 13 months in the early 1930s. He discovered his limits outside Chicago’s Biograph Theater on July 22, 1934, when FBI agents gunned him down after a screening of Manhattan Melodrama, starring Clark Gable and Myrna Loy. Soon after, a far-fetched conspiracy theory emerged and, unlike Dillinger himself, it won’t die. The theory states that Dillinger had altered his appearance and survived the government ambush, and that a doppelgänger was buried in his place. Dillinger’s prior efforts to remove his fingerprints and get plastic surgery fueled the rumors, which are so popular the FBI has a page on its website to debunk them.

It seemed for a while recently that Dillinger’s grave was going to be dug up—in part because some of his surviving family members have subscribed to the theory that there’s someone else buried there. The entire thing was going to be filmed for a television documentary, but now it appears that won’t happen amid official objections and lawsuits.

Forensic exhumations aren’t all that uncommon, but doing one on a body encased in concrete definitely is. Tomb security has been a priority at least since ancient Egypt, when pharaohs were laid to rest in massive pyramids or secret chambers in the Valley of the Kings, not that any of it discouraged thousands of years of tomb raiding. Over the ages, graves and tombs all over the world have been opened—more for the treasures they might contain than the human remains. That rationale changed in 18th and 19th-century Britain, when bodysnatchers dug up corpses themselves for sale to medical colleges. It was such a concern that iron cages or boxes for burials, called mortsafes, grew in popularity.

In other cases—of leaders, entertainers, criminals, or cult figures—grave robbing has a different appeal altogether. Abraham Lincoln’s remains were nearly taken from his Springfield, Illinois, mausoleum in 1876. Charlie Chaplin’s body was successfully stolen from his grave in Switzerland about a century later (and recovered shortly thereafter). According to David Sloane, an expert in urban policy at the University of Southern California, and author of Is the Cemetery Dead? and The Last Great Necessity: Cemeteries in American History, there are two categories of coveted corpses in the United States.

“The first category is the George Washingtons and the Abraham Lincolns, whose families and friends were concerned with their bodies or graves being despoiled by adventurers or people trying to sell body parts, like a saint,” he says. “The other group that people are careful about are the nefarious or the infamous.”

Dillinger falls in the latter group. What has made him different than the average criminal is the sense of adventure he seemed to bring to mayhem and his ability to enlist the mass media as an accomplice in myth-making over a year of robberies, gunfights, car chases, and escapes. His exploits were an escape for America itself at the height of the Great Depression.

“It’s not just the bank-robbing, it’s the elusiveness,” says Elliott Gorn, a historian at Loyola University Chicago and author of Dillinger’s Wild Ride: The Year That Made America’s Public Enemy Number One. “Even in the end, when he’s gunned down in Chicago, it got international press and stories asking, ‘Is this really possible?’ ‘Was the fix in?’”

Dillinger was an engine of notoriety, and it was a role he reveled in. “I wouldn’t say he was a narcissist,” says Gorn. “I’d say sociopath.” Give the infamy, Gorn says that conspiracy theories—both about whether he is in his grave, and about whether his grave was secured—are natural.

“This is a floating legend that gets attributed to all kinds of people that people don’t want to believe have died, or have been bulletproof in some way. Elvis Presley? Never died. John Kennedy? Never died. Amelia Earheart, same thing,” he says. “It seems a little arbitrary. No one’s saying Lyndon Johnson isn’t dead. It’s mostly deaths in mysterious or violent circumstances.”

Dillinger, more than the other outlaws of his age—Bonnie Parker and Clyde Barrow, Baby Face Nelson, and others—genuinely seemed to be beloved. “Dillinger was much more charismatic,” says Gorn. “If you look at photos of him, you kind of see it. He’s almost winking at you. You can tell this is the most fun he’s ever had in his life.”

All of this added to the event that his death and burial became. Hundreds turned out to see his body being moved, and people attempted to rip parts off the hearse as souvenirs, and grabbed clumps of dirt and flowers from the grave, the Indianapolis Star reported at the time. In the 85 years since, Dillinger’s headstone has been replaced multiple times, because visitors keep chipping parts of it away as keepsakes. It is then perhaps not surprising that people would be worried about the integrity of his grave itself.

According to Crown Hill: History, Spirit, and Sanctuary, a 2013 book published by the Indiana Historical Society: “A few days after the funeral, Dillinger’s father returned to Crown Hill to arrange for the casket to be reburied under a protective cap of concrete and scrap iron that was then topped with four immense reinforced-concrete slabs placed in stepped gradations above Dillinger’s body.” Other sources cite some of these fortifications but not all of them, and still others believe that the entire story was deliberately conconted as a deterrent.

Perhaps it’s best that the exhumation may not go forward. It would be “a heck of a lot harder” to do, Sloane says, and the casket itself might have caved in under the weight. For now, the grave will remain a mystery, even if we’re pretty sure who is in it.

For decades, the Mississippi River town of Muscatine was the pearl-button capital of the world.
gangstersconspiracy theoriescrimedeathgravestoneshistory
Keep Exploring
beach

On the Hunt for National Treasures With America’s Archive Detective

Mitch Yockelson scours the country for its missing heritage.
cemeteries

Are Double-Sided Graves the Solution to London's Burial Crisis?

Toward a new definition of eternity.
libraries

Found: A 'Life' Magazine Stolen From a Library 51 Years Ago

The sender returned it, confessed, and paid up.
Video

In 1930s New York, the Mayor Took on the Mafia by Banning Artichokes

Gangs and mafiosos have a long history with food crime.
Read more
Thanks for sharing!