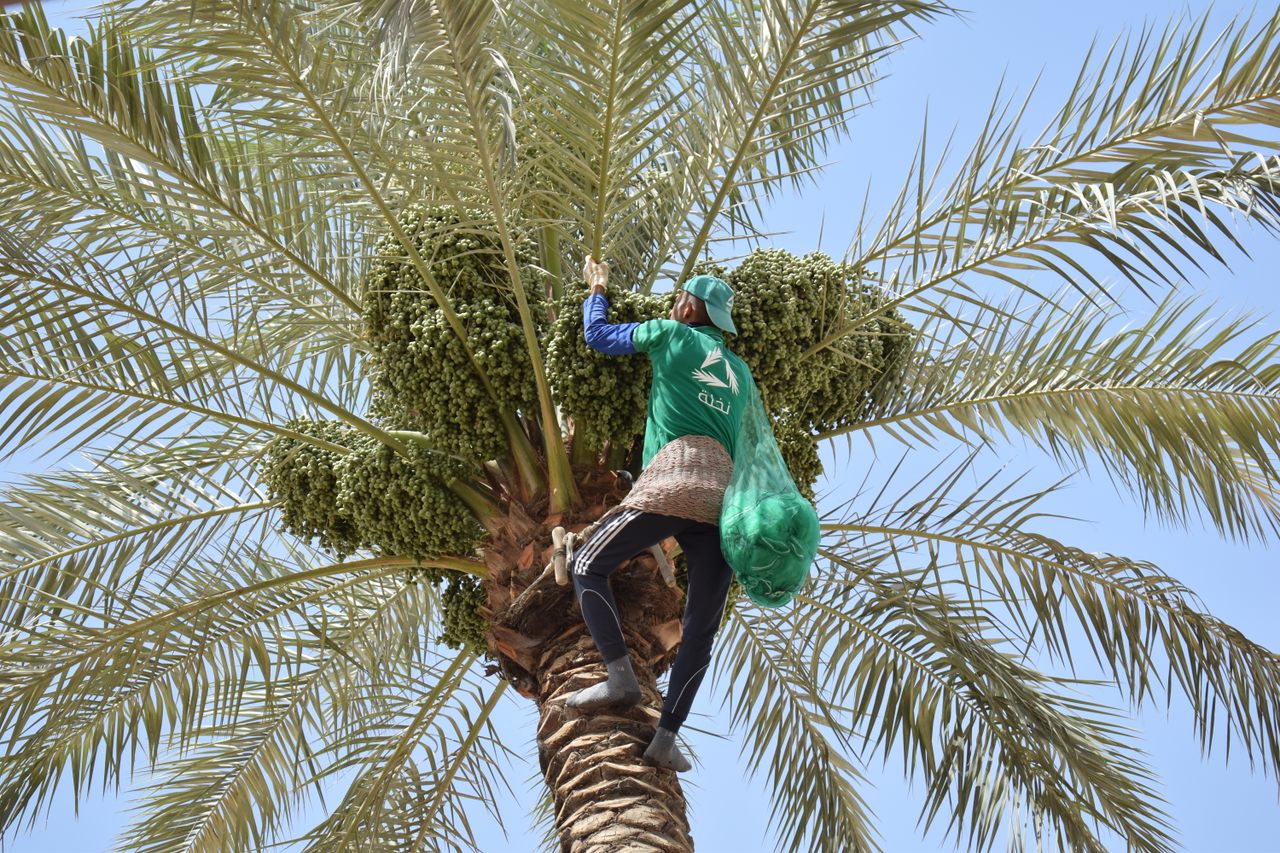 Climbing date trees can be a perilous task. All images courtesy of Nakhla
In This Story
Destination Guide

Faiz and Nidhal Najimaldeen stand in the shade of a 40-foot palm tree at the end of their garden in central Baghdad. The brother and sister, who have lived here since the 1980s, watch as, high above, Adil Yassin Hubair encloses great green bunches of dates into netted bags. It’s June, and the unripe fruit needs protection from marauding birds.

Hubair, 29, works for a young Iraqi company called Nakhla, or “palm tree” in Arabic, which is trying to revive Iraq’s once-great date empire. Nakhla’s model offers palm-tree owners, farms, and other organizations its palm-care services in return for an annual subscription fee of between $35 and $75 USD per plant. Nakhla then harvests and sells the dates, returning a percentage of the profit to the palm owners.

Iraq once produced most of the world’s dates. But an eight-year war with Iran in the 1980s and the US-led invasion in 2003 led to the destruction of as many as half of its 30 million date palms. Once known as the “King of Dates,” Iraq only holds a five percent share of the world’s date market today

Faiz Najimaldeen walks me across a trim lawn towards two more palms growing beside the house. The garden used to have another two palm trees, Najimaldeen says. One died from a lack of care. The other was hit by a bullet fired by US forces in 2003. “It went straight into the heart of the tree,” he says, pointing up to an array of pockmarks that cover the back wall of the house.

The Najimaldeens earn about 225,000 Iraqi Dinars ($154 USD) per year from their dates. But the collapse of Iraq’s date empire meant more than the loss of income. The date palm that now grows around the world, including in California, may have originated in Iraq. They’re mentioned in the Quran 22 times and, in one chapter recounting the story of Jesus’s birth, God tells Mary to eat their fruit as she suffers the pain of labor. Even the Babylonian king Hammurabi, who ruled over what is now Iraq more than 3,500 years ago, included several laws relating to the treatment of date palms in his legal code.

The Najimaldeens tell me of the date’s many health benefits. They’re high in antioxidants that help prevent disease. They’re also high in fiber, potassium, magnesium, copper, manganese, and vitamin B6. The Quranic story about their power to ease the contraction pains of pregnant women isn’t without scientific grounding either. Dates are believed to promote natural labor. “There is nothing better than this tree,” Najimaldeen says.

The economic, cultural, and health benefits were all on Labeeb Kashif Al-Gitta’s mind when he and his co-founders founded Nakhla in 2016. They recognized that, despite Iraq’s heritage, no one was looking after its remaining date palms. The traditional harvesting model also seemed broken. Most palm climbers in Iraq work freelance. According to Al-Gitta, this creates problems. “They go to farms, but they do sloppy work,” he says. “They just want to finish as quickly as possible and get paid. They don’t care what happens to the trees.”

A TV program about an “adopt a bee” project in the United Arab Emirates provided the inspirational spark for Al-Gitta and his co-founders. Their initial concept was quite different from Nakhla today, and involved buying a farm, growing palm trees, and inviting sponsors to pay for the trees’ upkeep as a way to improve the environment. The dates could then be sold for profit.

Despite the setback, Al-Gitta knew they had been onto something. “I had an itch in my brain,” he says. “Then I got something.”

Walking along Baghdad’s streets, Al-Gitta noticed palms poking their fronded heads above residential garden walls. He had palms in his own garden, and understood the frustrations of dealing with freelance tree climbers. Many owners didn’t bother to care for their palms at all, which meant the trees never bore fruit. That’s when he came up with the idea for Nakhla’s current subscription-based model.

The pivot meant that there was no need to wait for new trees to grow before turning a profit. But it wasn’t without its challenges. “It’s not easy to convince people of a new idea here in Iraq,” he says. “Because we have come out of a lot of wars, people can’t trust people who come to their homes. They don’t know you.”

By 2018, the Nakhla founders had 20 trees in their care. From there, the quality of their service spread by word of mouth. They visited the palm trees four times per year, unlike the single visit solo freelancers would make. They also made sure to clean up any mess left behind.

Nakhla is now responsible for around 14,000 trees in the capital. Next year, Al-Gitta hopes to make that 50,000. Nakhla has grown beyond residential garden walls by taking over the care of palms on bigger farms too. Farmers only need to pay the first year’s subscription fee. Date sales cover the cost of the palm-care service thereafter.

Al-Gitta even managed to revive the original “Adopt a Palm” initiative, with cooperation from the Iraqi government. Sponsoring companies can now receive tax credits for funding the upkeep of palms lining Baghdad’s public streets. Branded signs are erected beside the adopted trees like miniature billboards.

Such rapid expansion has presented new challenges. Al-Gitta is struggling to hire enough tree climbers to service all the trees under Nakhla’s care. The trade takes at least five years to learn and the conditions are dangerous. Many who might once have inherited the jobs from their fathers are finding other work. Now, Al-Gitta is considering using cranes to lift non-specialist workers up to the dates instead.

There are also challenges posed by the date market itself. After the Iraqi industry collapsed, other countries like Egypt and Iran were able to inherit its customers by selling much cheaper alternatives. But Al-Gitta hopes that Iraqis will be willing to pay the difference when presented with Iraqi dates in high-quality packaging. “Iraqi people love Iraqi dates,” he says. “They choose Iraqi dates over any other, every single time.”

Nakhla is now making plans to expand outside Baghdad, to other cities like Mosul in the north. It’s even received a request to set up a program in Egypt. Al-Gitta envisions a future where people across the world can adopt Iraqi trees by paying subscription fees and receiving profits in return, all while helping restore Iraq to its throne as the King of Dates.

Back in the Najimaldeen’s garden, Nidhal brings out a rectangular cardboard box of Nakhla dates, cold from the fridge. These ones are stuffed with little golden walnuts. She prompts me to take them. Meanwhile, Faiz asks me to guess how old he is. Early 70s, I say. “I’m 84,” he says with pride, before extolling the dates’ health benefits. “We eat them every day,” he says. “Of course we do.”

An archeologist is mapping out the last remaining trees.
farms

A past global staple you've never heard of, maslins are poised for a comeback.
murals