What It's Like to Care for the Mighty 'Corpse Flower' - Atlas Obscura
Want to see fewer ads? Become a Member. 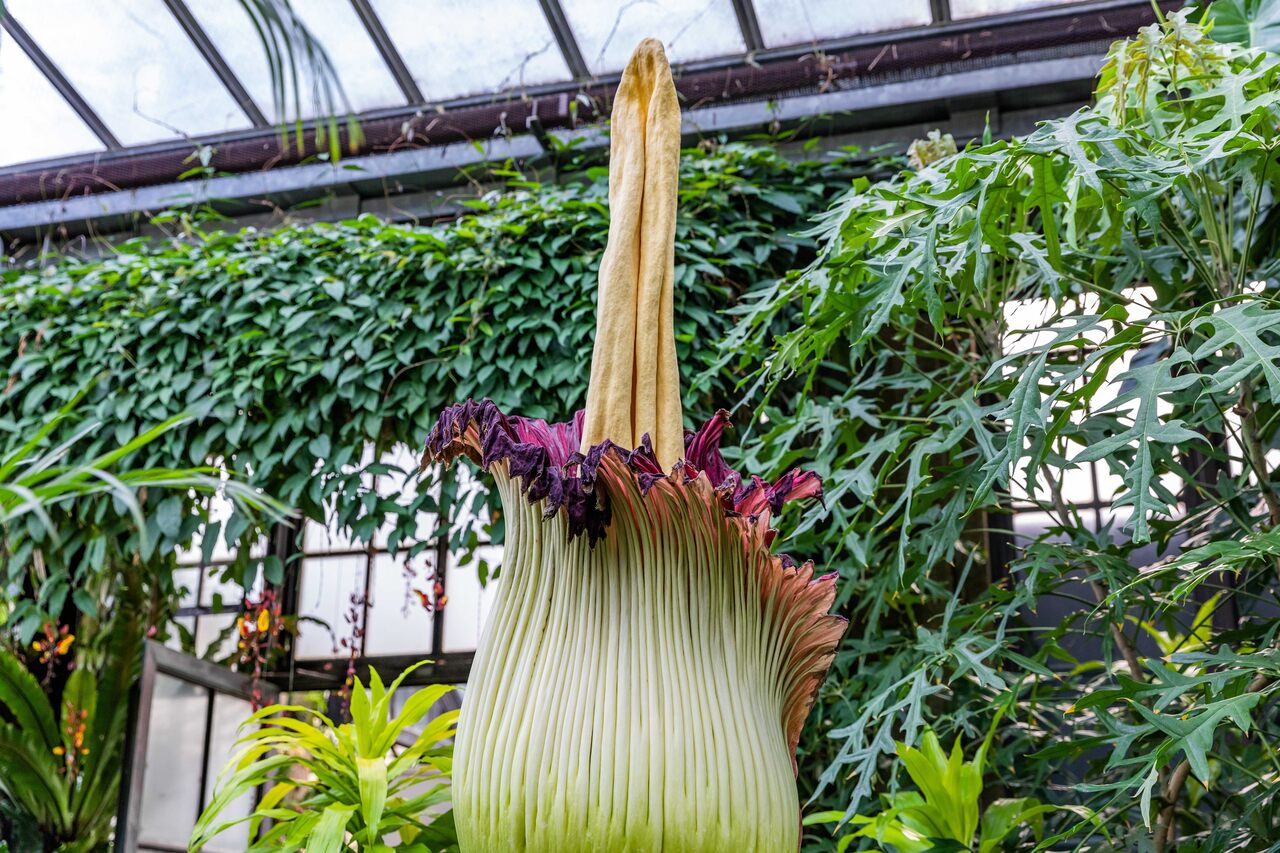 After blooming for about 48 hours, the titan arum’s spathe closed and the spadix began to wither. Mathias Becca/Courtesy Longwood Gardens
In This Story
Destination Guide

For a few days in mid-July 2020, a botanical spectacle began to unfurl at Longwood Gardens in Kennett Square, Pennsylvania. Over the course of these two days, a massive titan arum, better known as a “corpse flower,” bloomed before crowds of hundreds of people waiting in socially distanced lines. Among the largest inflorescences (the “bloom” is covered in smaller flowers) in the world, titan arums earned their popular name by emitting the overwhelming smell of rotting flesh to attract carrion feeders as pollinators. These rare flowers can be found in botanical gardens around the world—where they’re a major draw when they bloom—and are endemic to the hot, humid, equatorial rainforests of Western Sumatra. The first cultivated titan arum bloomed at the Royal Botanic Gardens Kew in 1889, launching a fervor for these strange flowers, which typically only bloom once or twice a decade.

Longwood’s monster titan arum, affectionately nicknamed Sprout, bided its time as a tuber and leafy stalk for more than four years, and was then pushed into bloom by a recent heatwave. Thousands of viewers tuned in to watch Sprout’s progress in a livestream, as its leafy spathe gradually opened up to reveal a deep maroon interior and signature tall, wrinkly spadix—from which the species gets its tongue-in-cheek Latin name, Amorphophallus titanum, or “giant misshapen penis.”

Getting to this smelly spectacle required human intervention, specifically by Sprout’s caretaker, Longwood’s senior horticulturist Joyce Rondinella, who doted on the plant and personally artificially pollinated it (as all cultivated titan arums require). Rondinella spoke with Atlas Obscura about the joy of working with the corpse flower and what it has meant to her during the pandemic.

The titan arum is a long way from its home in the rainforests of Western Sumatra. How did Sprout get to Pennsylvania?

He came to us via the University of California, Berkeley. They started him in 2003 and then from there distributed him to the Chicago Botanic Garden, where they grew him on, and they did bloom Sprout in 2016. Then they brought him to us in 2018, and I grew him on through his next leaf cycle.

You had to artificially pollinate Sprout. How does that work?

In the aroid (Araceae) family there’s a spathe [a leaf-like sheathe] and a spadix [the fleshy “spike” that holds the flowers]—that’s what makes the family distinguishable. It’s a very large family, with more than 3,000 species and 130 genera, and Amorphophallus is the largest genus in the family. At the base of the spadix are the female flowers, and right above those are the male flowers. In nature, you would have a critter, a beetle, endemic to Sumatra, pollinating the flowers blooming, or hopefully blooming, in different patches on different nights. On the first night, the female flowers at the base are receptive to pollen. Then, on the second night, the male flowers shed their pollen. In nature, it would be a beetle doing this, going from the male flower to the female flower when she’s receptive.

So on the first night I went in and put pollen, which is sticky, on the stigma. The pollen came from Chicago, and I hoped it was good pollen. But I wouldn’t know for nine to 12 months. Obviously, I’m acting as the beetle. On the second night, I collected the pollen from its male flowers and put it in a freezer to share with other botanical institutions. Most gardens only have one flower, and it’s very rare to have two blooming at once, so we need to share our pollen. This isn’t the only plant that does this: We do this with other plants, like the Victoria lily.

How do you know when these titan arums are going to bloom, and what do you do once you know it’s coming?

First, it has to be old enough—at least seven to 10 years. And the corm itself, the underground storage unit or tuber, has to be pretty big. And they can get up to like 200 pounds or more. It has to be big enough to have all of the energy to put out this big flower. When a new growing tip started to emerge in May, it looked like it could have been a leaf, but you watch it carefully, and it starts to show signs: Is it a leaf, or is it a flower? And that was all the buzz around here. I kept watching it, and it started to look asymmetrical, like it had that bulge of a flower. So, early on, we were like, “Uh, oh, this is going to happen.”

So, we got a Sprout team together with marketing, guest services, and everybody had to get involved. I watched it all of June, and then at the end of June I knew—I knew instinctively from watching it and knowing—that it was going to be a flower. And then that Fourth of July weekend it went crazy. The heat—it loves the heat, that Sumatran heat—that weekend caused it to grow like 15 inches, and that’s when we got together and were like, “Wow, this is going to happen sooner than we thought.” I measured it every day, and it kept growing, growing, growing, and when that growth started to slow down, I knew it was getting closer. When those bud coverings, the bracts, start to drop back, I know that’s another sign. From there you can time it. But if I had a dollar for how often someone asked me when it was going to bloom … we were all kind of on standby.

What is it like to work so up close and personal with such a rare, distinctive flower, especially away from the crowds?

It’s something with this plant that you train for—it’s not for the beginner gardener. I really love my “behind the scenes.” I have a back growing house to support the displays that are open to the public, and working with them on a quiet day—morning, evening—it’s very peaceful. It’s very meditative. I’m in the zone. During COVID, when we were down to bare bones as far as people, I needed my plants as much as they needed me. You get to know them. Each one has a personality, to me anyway, and different energy. I’m humbled. It’s a privilege to have this opportunity, because not many people have it. There’s only one tropical grower here, and that’s me. I’ve been doing it for a long time.

How is caring for Sprout different from other tropical plants under your watch?

In 2009 I propagated Encephalartos woodii, a cycad, and I really wanted to do that—they’re even rarer than this plant, so that was on my bucket list. That’s out on display and growing. I love cycads. But people know I love aroids like titan arum. I’m an aroid nut. People would be like, “When are you going to get one, Joyce?” And I was like, “I’m gonna!” So, when it was in my back growing house, I had caution tape around it and I didn’t want anyone else to water it. It was my baby. Everybody knew: Don’t touch the titan. I’ve had them before and they were at blooming size—at one time I thought this other one was going to bloom—and I went away, and then it got overwatered and it rotted, and I was crushed when that happened. I almost cried. So it was this real challenge, and I was up for it. I like growing plants like that, kind of rebels, you can’t totally control them. But you have to do the right thing, educate yourself, and know how to grow it.

And the other reason why I wanted to grow it, and I didn’t even realize it until I was here and watching the process, was its following. I never would have expected that. It was so much fun when I was out there—the kids would come up and they would be amazed. I just loved watching the kids. If I could capture a kid to get into this field … we need people. We need people in horticulture, and we need people to love plants. So those nights here were magical. People were standing in line for hours, people were dancing. I think that’s why it bloomed when it did. So many people who know me were like, “It figures, that plant was waiting.” We needed it. I sat here in the evenings, because I was here late every night, and when I looked out over that and saw people dancing, I was like, “Wow.” I was texting my friends and family and telling them what joy it brought. To think that I could do that with a plant, I mean, talk about incredible.

Now that Sprout’s bloom cycle is officially over for the next few years, what’s next?

Well, I moved Sprout up from display to my growing house. The spathe and spadix—that part of the flower really drops, and the flower is done. But I’m going to carefully monitor the female flowers at the base, and hopefully I’ll start to see some signs that the ovary will start to swell, and then it’ll take nine months to mature, and hopefully I’ll have viable seeds that we can distribute to other institutions and gardens so Sprout’s legacy will carry on. The plant will be in that cycle for a long time, and the whole stalk will go into a dormant period. I’ll repot it, and hopefully next time it should have a big, tall leaf—it’ll probably leaf out for another two or three years, going from dormant to leaf, then to dormant, and then maybe another bloom, if we’re lucky, in three, four, or five years. It’s kind of hard to predict, and that’s kind of what I like about it. It’s one of these plants that you can’t control.

A 'Century Plant' in Chicago Is Having an Epic Growth Spurt

It's outgrown the greenhouse, and it's a big greenhouse.
botanical gardens

13 Beautiful Botanical Gardens Where It's Easy to Lose Yourself

Our readers shared some of their favorite collections of greenery in the world.
Video

Just another day in Hawaiian conservation.
Read more
Thanks for sharing!