How Stalin and the Soviet Union Created a Champagne for the Working Class - Gastro Obscura
Want to see fewer ads? Become a Member. 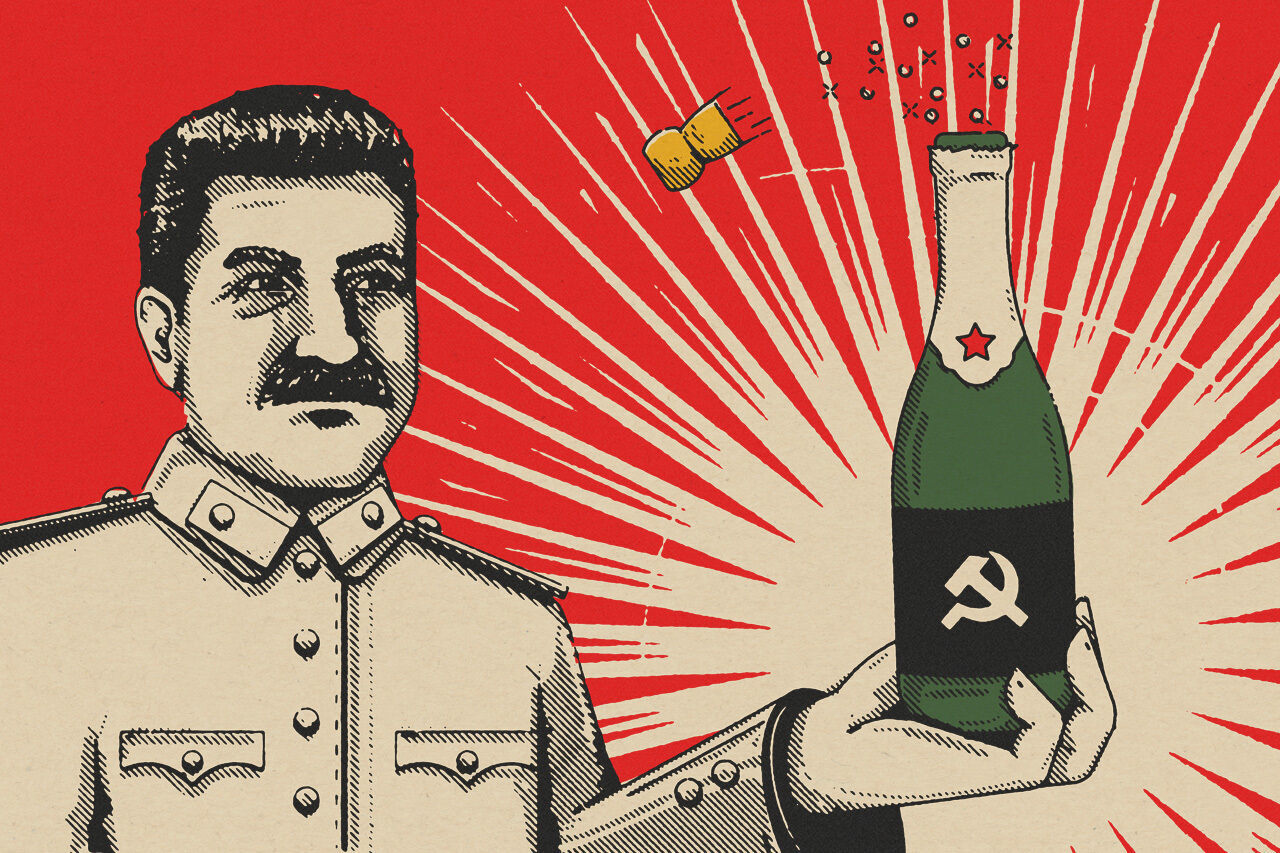 Behind the Iron Curtain, shelves were empty but champagne was affordable. Michael George Haddad
In This Story
Destination Guide

When authoritarian leaders obsess over a particular food, it can change how a country eats and drinks for generations. This week, we’re looking at five cases of dictator food projects and what they reveal about the power of food. Previously: how Mao made China mad for mangoes.

In the early 1930s, a catastrophic famine swept across the Soviet Union. The chaos of collectivization, combined with poor harvests and brutal socio-economic policies, devastated the country’s grain-growing regions. Millions died of starvation, and corpses accumulated along railway tracks and roads, filling the air with the sour stench of decomposition. Hordes of hungry peasants roamed the countryside, desperately searching for work or anything remotely edible: corncobs, acorns, grass, cats, dogs, and, most horrifically, even each other.

Just three years later, while basic necessities were still scarce, the Kremlin turned its attention to another shortage: the lack of champagne. In 1936, the Soviet government passed a resolution to dramatically increase the production of sparkling wine, setting an ambitious goal of producing millions of bottles over the following years.

The idea to create a communist champagne industry—a Herculean undertaking, given the context—came directly from Joseph Stalin, who hailed from the Republic of Georgia, home to the world’s oldest winemaking culture. He proclaimed that champagne was “an important sign of well-being, of the good life” that socialism would make available to all—a far cry from Lenin’s simple promise of “bread and peace.”

The push to uncork a sea of champagne came only a year after the withdrawal of ration cards in 1935. Desperate to show that the Soviet Union had more to offer than privation and persecution, the government launched a concerted effort to mass produce and democratize champagne and other high-end products.

“The idea was to make things like champagne, chocolate, and caviar available at a rather cheap price so that they could say that the new Soviet worker lived like the aristocrats in the old world,” explains Jukka Gronow, author of Caviar with Champagne: Common Luxury and the Ideals of the Good Life in Stalin’s Russia.

But before the proletariat could pop bottles, winemakers needed to make bubbly on a budget. This required production on an industrial scale, which wasn’t possible using the traditional, bottle-aged method. The answer came from winemaker Anton Frolov-Bagreyev, who ditched the French process of bottle fermentation in favor of pressurized tanks, which condensed the three-year maturation process into a month and allowed batches of 5,000 to 10,000 liters to be made at a time.

To turn Stalin’s sparkling rhetoric into reality, the Soviet government unleashed a flurry of resolutions. Bureaucrats ordered the construction of new vineyards, factories, and storehouses as well as the recruitment and training of thousands of new workers. Resources were diverted, and the State bank opened a special account dedicated to financing the multi-million ruble initiative.

The ambition of Stalin’s vision was mirrored in official output targets, which projected the nascent industry producing 12 million bottles a year by 1942. Since champagne had been condemned as a bourgeois indulgence, many vineyards had been destroyed or repurposed to cultivate other crops. The surviving state-run wineries were barely operational.

The dismal state of Soviet viticulture made the production targets impossible to achieve. “The projections were never realistic, but if factories didn’t live up to them, the people working at them or running them could be labeled enemies of the people and purged,” explains Darra Goldstein, a food scholar and author of the upcoming cookbook Beyond the North Wind: Russia in Recipes and Lore. When the Abrau-Durso winery on Russia’s Black Sea coast, fell short of expectations in 1938, the Soviet newspaper Izobilie questioned the director’s loyalty and suggested the winery “be cleared of class enemies.”

The production of Soviet champagne prioritized quantity over quality. Grape growers uprooted acres of indigenous vines from Moldova to Tajikistan and replaced them with durable, high-yield varieties that catered to Stalin’s sweet tooth. Large, centralized factories processed grapes from across the region and sent the bulk wine mixture to massive bottling plants, which churned out thousands of bottles an hour using Frolov-Bagreyev’s tank method and a mechanized bottling system. The result was Sovetskoye Shampanskoye, a cheap, syrup-sweet sparkling wine for the ordinary Soviet worker.

“The quality wasn’t so high, because it was all about mass production,” says Goldstein. “Questions of taste or refinement were secondary to that.” Indeed, factories often cut the bulk wine product with preservatives and sugar to mask its poor quality.

The taste is often considered too sweet for Western palates, which are accustomed to the dry bite of Brut champagne. “To me as a child it always tasted like sparkling soda but with alcohol,” says Anya von Brezmen, a culinary writer born in the Soviet Union. “It has a kind of slight sweetness and just tasted kitschy and fun. You could guzzle it.”

But behind the Iron Curtain, it was the only bubbly available, and for those who grew up in the Eastern Bloc, its taste is indelibly intertwined with layers of memory and nostalgia. “It is difficult to separate the taste of the drink from everything else that I experienced during some hot, late summer evenings in Moscow or on the high banks of the river Dnepr in Kiev in my youth,” says Gronow.

By the end of the decade, Sovetskoye Shampanskoye was widely available in Moscow and other large cities, offered on tap in stores. Later, in the 1950s, it was also sold by the glass at Lenin Stadium. While it remained too expensive for everyday consumption, champagne became an important ritual aspect of all major Soviet celebrations. “You couldn’t imagine a New Year’s celebration without champagne. It was absolutely requisite,” says Goldstein.

The mass production of Soviet champagne was part of a larger propaganda campaign intended to showcase the cultural and economic advancement wrought by socialism. “It was like the Coca-Cola of the Soviet Union. It symbolized the good Soviet life,” says Gronow.

“It was a very contradictory period. There was this whole happiness industry that produced uplifting musical comedies and films. The champagne and chocolate were part of this,” explains von Brezmen. “There was a lot of cheer, but at the same time people were being arrested at night and were terrified.” Champagne was even colorfully advertised on the sides of the Black Maria, which transported prisoners from Soviet cities to the Gulags.

The paradox of Sovetskoye Shampanskoye highlights the contradictions of life behind the Iron Curtain, where the shelves were empty but champagne was affordable. “It shows that life in a totalitarian state was complicated. It wasn’t all just grey and terrible,” says von Brezmen. “There were these moments of joy and happiness and celebrations that really meant a lot in an era that was filled with terror.”

Memories of this levity are fueling Soviet nostalgia in modern Russia, and driving demand for Sovetskoye Shampanskoye, which is now produced by private companies, and other tastes of the era, which can even be enjoyed in restaurants that evoke communist canteens. Yet, the thirst for Soviet champagne often blurs the line between reminiscence and revisionism. “They are very difficult totems. It’s kitsch and cool and funny on the one hand, but it was a tragic time,” says von Brezman. “I think they’re kind of loaded symbols. They are sort of bombs in a champagne bottle.”

How Santa Survived the Soviet Era

Of all the variations on the beloved character, Russia's Ded Moroz might have the strangest history.
mummies

Join us for a daily celebration of the world’s most wondrous, unexpected, even strange places.
salt

The past, present, and future of Russia's signature alcohol is remembered in the world's only museum dedicated to the starchy spirit.
Monon, Indiana

Train cars and railroad artifacts abound at this restaurant devoted to railway history.
Want to see fewer ads? Become a Member.
From Around the Web
Atlas Obscura Trips
Searching for Russia’s Northern Lights
View This Trip
Thanks for sharing!