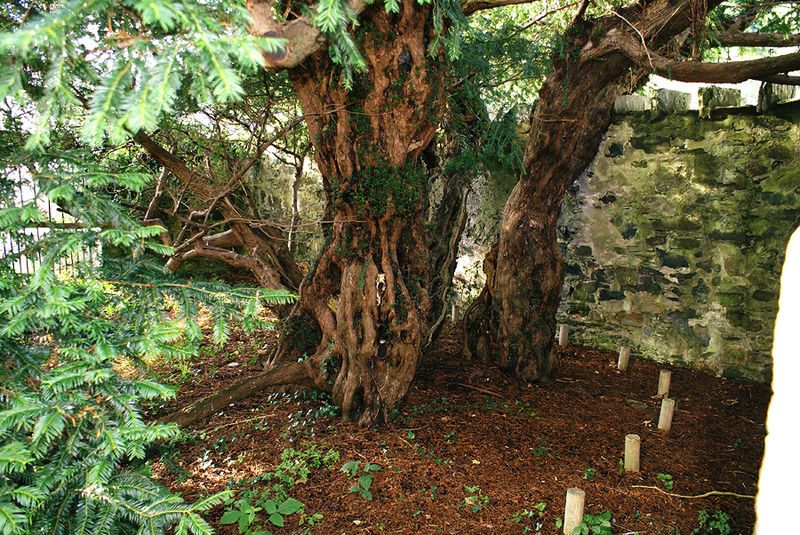 The split trunk of the very, very old yew. Mogens Engelund/CC by 3.0
In This Story
Place

In the corner of a churchyard in Perthshire, Scotland, an ancient giant is under attack. According to some, the Fortingall Yew has lived for what might be 5,000 years, making it the oldest living thing in Britain. But the tree’s years may be numbered because, well, people keep cracking off its twigs and branches to keep as souvenirs, according to a report in The Scotsman. “It is understandable that people want to touch history in this way and stand on the same ground as people from thousands of years ago,” Catherine Lloyd, coordinator of the Tayside Biodiversity Community Partnership, writes in an email. “But the tree does appear to be stressed.”

The belabored Fortingall Yew isn’t just ancient, it’s enormous. The massive trunk—which measured 52 feet around in 1769—has now split into several separate trunks, making the yew appear to be a cluster of smaller trees, some as tall as 23 feet. This process is as normal as menopause for an aging yew. European yews, or Taxus baccata, can easily live to 600 years of age, and then reach “ancient” status when they hit 900 or so, according to the Robert Bevan-Jones’s The Ancient Yew. Yews as old as this one tend to hollow out over time, as the ancient heartwood naturally decays. It’s a helpful survival strategy for elderly yews, as it unburdens them of the weight of an enormous trunk. Yews’ exceptional longevity is also buttressed by the species’ ability, even in old age, to develop new shoots from low on its trunk. Though the Fortingall yew’s age is contested, experts believe it is at least 2,000 years old, based on 19th-century ring counts and historical measurements.

Today the tree is encircled by a sturdy wall of stone and iron that was built sometime in the Victorian era. The enclosure screams “Leave me alone,” as much as a wall ever could, but it doesn’t seem to have deterred tourists. According to Lloyd, relentless souvenir-seekers climb over high stone wall to snip branches and tie beads and ribbons around its twigs. It’s not a harmless intervention, despite the size of the tree and the sturdiness of the wall; someone climbing into the enclosure recently somehow twisted and flattened a metal plaque erected by Britain’s Tree Council noting the tree’s exceptional age, Lloyd says.

This impulse sadly continues an ancient tradition of humans abusing this particular tree. “If you research the stories, there are the usual highlights of bonfires being lit during high days and holidays, a horse being ridden through the middle of the tree, etc.,” Lloyd says. “People have been unkind to the tree for centuries.” For a length of time in the 19th century, funerals held at the church typically paraded through the gap at the center of its trunk, according to John Lindsay’s 1884 article “On Yews, With Special Reference to the Fortingall Yew,” in the journal Transactions of the Edinburgh Field Naturalists’ and Microscopical Club. In 1806, local boys lit their Beltane bonfire—part of the traditional Gaelic May Day festival—at the base of the tree. The wall has discouraged some of these insults, but the current problems with souvenir-snatching are nothing new and were perhaps even more obviously damaging in the past. In 1833, one Patrick Neill visited the yew to find that “large arms had been removed, and even masses of the trunk carried off, to make drinking-cups and other curiosities,” according to a dispatch he wrote for the Edinburgh New Philosophical Journal.

But this recent siege—a thousand cuts—may mark a greater threat than any the tree has faced before. In response to the stress it is under, the yew has begun to change sex, an unusual transition for yews and other conifers. Yews are dioecious, meaning individuals are either male or female. They can be easily sexed during autumn and winter, when males develop small bulbs that contain pollen and females grow crimson-colored berries. After maybe 5,000 years of living as a male, in 2015 the tree sprouted the unmistakably red berries characteristic of a female.

The scientists from the Royal Botanic Garden in Edinburgh who first noticed this shift were taken aback, according to the garden’s blog. The sex change seemed isolated to one small branch. The first partial sex-change observed on a yew occurred in 1837 in Shropshire, but they’re still quite uncommon and scientists aren’t quite sure why the trees do it, according to The Guardian. But such shifts may be their response to increased environmental stress, according to The Washington Post. Some trees, such as ash, routinely switch sex to reduce the strain caused by producing large amounts of berries. This sexual compartmentalization may also be a survival strategy to help the tree maximize its chance at reproduction, according to the Post.

According to Lloyd, the tree isn’t in any immediate danger of dying, though recent local media coverage has suggested it only has decades left in it. “The tree does appear to be stressed—I think I would be if I was so old,” she says. “But we don’t know how stressed. We need to nurture it and give it space.” Some experts are concerned the walled enclosure surrounding the tree has actually made things worse, by creating an unfavorable microclimate, Lloyd says. But without it, the souvenir problem would likely become even more acute.

The yew has certainly seen its share of mythologizing over the years. It is often called the oldest tree in the United Kingdom, but yews are notoriously hard to date. Over time, a yew’s annual growth rings rot away from the inside, so that eventually no wood on the tree is as old as the tree itself. Modern estimates place the tree anywhere between 3,000 and 5,000 years old. The most prominent rumor about the tree claims that Pontius Pilate was born in its glen. Lloyd happily debunks this. “The Romans were in the vicinity, but there is nothing to prove they lived at Fortingall,” she says. But it has seen a great deal of history without celebrity appearances. Lloyd says “it is more important to place this tree when it was mature, if not old, during the Iron Age period, just as the Romans were indeed in Scotland, and then the Picts were present and all the rich story they bring to the country.”

In general, Great Britain’s churchyards are chock-full of ancient yews. There’s the 4,000-year-old Llangernyw Yew, at St. Digain’s Church, which might be the oldest tree in Wales. The 4,000-year-old Ashbrittle Yew stands, somewhat lopsidedly, above gravestones in the churchyard of St. John the Baptist in Somerset, England. The Degynnog Yew near Sennybridge, a village in the historic county of Brecknockshire, Wales, could be older than the Fortingall, and also had a door installed in its hollow trunk sometime in the 18th century.

The yews’ presence in graveyards is no coincidence. Sometimes called “the tree of the dead,” the funereal-looking conifer has dominated churchyards for thousands of years, according to an excerpt from Thomas Laqueur’s The Work of the Dead: A Cultural History of Mortal Remains. Early druids living in Britain saw the yew as sacred to Hecate, the goddess of witchcraft and death. Archaeological finds from around the yew suggest the tree may have served as a center of pagan worship, Lloyd says.

While the tree’s caretakers determine the best strategy to safeguard it, Lloyd has organized a project to preserve the yew’s DNA for when the rest of it is gone. In partnership with the Royal Botanic Garden, Lloyd has overseen the growth of seedlings taken not from the yew itself, but from a hedge already propagated from a cutting from the yew—in order not to further besiege the ancient tree. In around five years, the saplings will be big enough to be planted at the garden and in graveyards across Scotland, Lloyd says, spreading the old tree’s canopy across an entire country. Until then, the caretakers make the small ask that anyone who stops by to admire the ancient giant should please not rip off any of its branches. “We want the tree to live for a very long time into the future,” Lloyd says.

The supernatural has surrounded the guitar virtuoso for decades.
cemeteries

A Year Gardening the Grave of a Stranger

At Woodlands Cemetery in Philadelphia, green-thumbed volunteers participate in a unique program.
cemeteries

When nature and secret societies get together.
Video

4:16
Want to see fewer ads? Become a Member.
From Around the Web
Atlas Obscura Trips
Scottish Highlands: Clans, Castles, & Cèilidhs
View This Trip
Thanks for sharing!