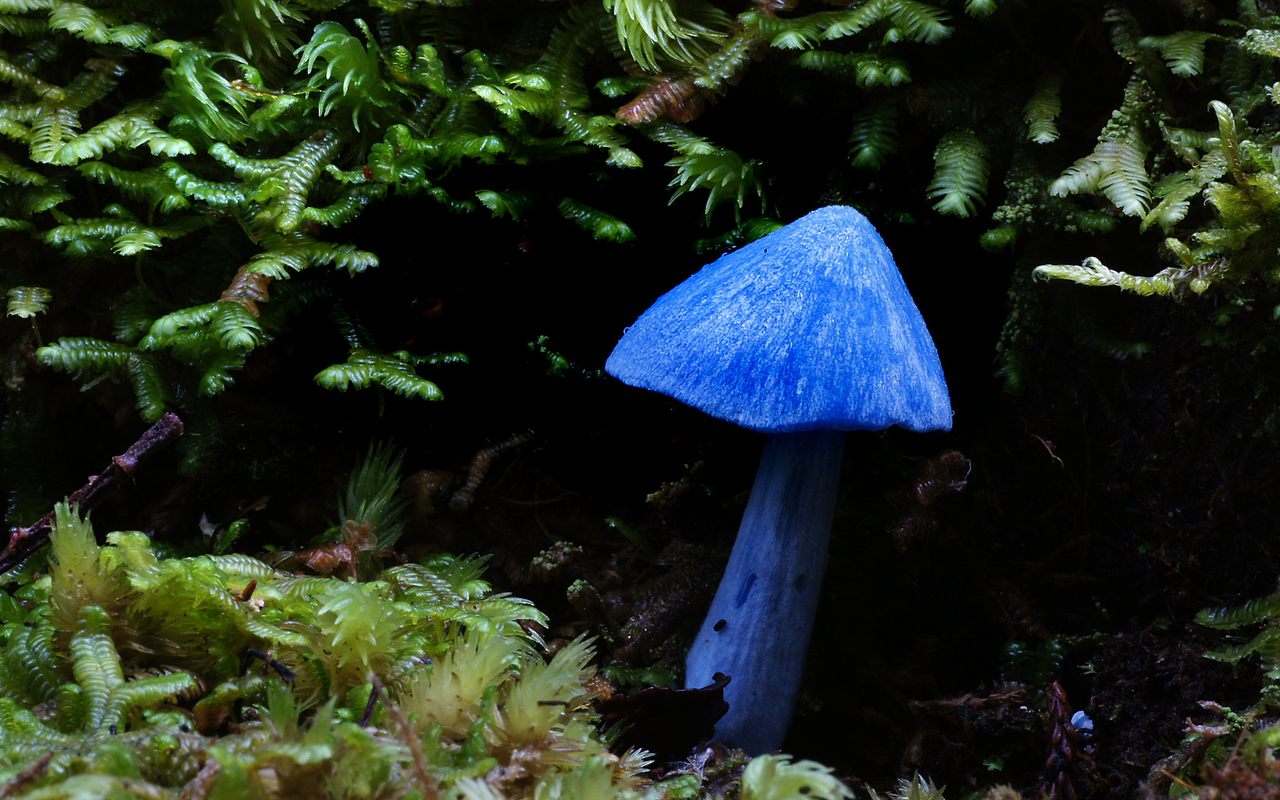 The mushrooms typically appear on their own or in a very small cluster. Bernard Spragg. NZ/Flickr/Public Domain
In This Story
Destination Guide

The first time Mahajabeen Padamsee stumbled across Entoloma hochstetteri in a New Zealand forest, she was happily startled. It was small, just a couple of inches tall, and she thought it seemed out of place. “I was like, ‘What are you doing here?’” Padamsee says.

E. hochstetteri is a mushroom, and it’s blue. It’s really, really, really blue—almost unbelievably blue, saturated in a way more often associated with kids’ markers or mouth-staining candy than with fungi. Padamsee, a mycologist at Manaaki Whenua–Landcare Research in Auckland and curator of the NZ Fungarium, did her graduate work in Minnesota and was more familiar with members of the Entoloma genus that live in North America. Many of those are saprobic decomposers, but others are mycorrhizal, meaning they absorb nutrients by entangling their threadlike hyphae around the roots of particular plants. And as far as Padamsee knows, none of the North American varieties are blue. She was surprised to find one in the middle of a forest, not obviously allied with a tree. It was a little island of blue in a sea of green.

The diminutive mushrooms play an outsized role in New Zealand’s cultural landscape. On the $50 bill, they share space with the kōkako, a bird that sounds like a warbling brass section tuning up before a performance. The birds and mushrooms coexist beyond the currency, too, including in the Pureora Forest Park on the North Island, a lushly wooded landscape that reminds Padamsee of The Lord of the Rings.

The fungus also flourishes in locals’ lives. Māori have long used mushrooms as food, medicine, and pigments for tattoos. This little blue species also figures in kōrero and whakataukī, narratives and proverb-style oral traditions “passed down in Māori families in that part of the country where the mushroom and the kōkako are still living—or at least were until living memory, since this country, like the rest of the world, is undergoing ongoing rapid ecological loss and degradation,” says Georgina Tuari Stewart, an associate professor of higher education at Auckland University of Technology (Te Wānanga Aronui o Tāmaki Makau Rau), in an email. (The kōkako that once flitted around the South Island are now presumed extinct, according to New Zealand’s Department of Conservation, and rats, possums, and stoats have gobbled up a sizable share of the kōkako population on the North Island.)

With mycologist Peter Buchanan and Māori-language writer, editor, and researcher Hēni Jacob, Stewart produced a bilingual educational guide about New Zealand’s fungi written for kids in English and te reo Māori. The guide recounts a story about how the kōkako wound up with its distinctive cerulean wattles by nuzzling against E. hochstetteri (also known as te werewere-kōkako). Fungi continue to figure in Māori life today. When Stewart and Buchanan held a launch event and blessing for the book at a Māori-language school, “teachers shared snippets of knowledge from their homes and childhood experiences about the fungi we were presenting,” Stewart says.

The mushrooms often appear singly or in pairs, instead of as a little carpet of caps. They fruit in New Zealand’s summer and autumn, from January to July; Padamsee says they’re best spotted between April and June. They sometimes appear in leaf litter, near pillowy moss, or beneath mature trees. They have sometimes been lumped in with—and then cleaved from—Entoloma aeruginosum, found in Japan, or Entoloma virescens, a species documented in the Bonin Islands, about 600 miles south of Tokyo. At this point, mycologists generally consider E. hochstetteri to be a distinct species.

Padamsee isn’t sure what gives the mushrooms the blues—or the pinks, for that matter. (The mushroom’s gills and spore prints are rosy). Mushrooms don’t photosynthesize, and they’re not packed with chlorophyll that gives green plants their verdant hue. Mushrooms get their colors from a variety of pigment molecules. Another blue mushroom, the denim-colored indigo milkcap found mostly in North and Central America, gets its color from a pigment with the tongue-twisting name 1-stearoyloxymethylene-4-methyl-7-isopropenylazulene. But as far as Padamsee knows, no one has definitely determined which pigment makes E. hochstetteri so brilliant. In an effort to puzzle that out, at least one team of pigment-sleuth researchers has tried to grow the mushrooms in a lab, without much success.

What is clear is that these mushrooms won’t send you on a trip. “They might look psychedelic, but they’re not,” Padamsee says. Though some mind-bending mushrooms turn blue after being harvested, not all blue mushrooms are transportive. E. hochstetteri doesn’t contain the consciousness-altering chemical psilocybin. “They’re not going to get you high,” Padamsee adds. “Not that I’ve tried.”

When it comes to whether the watery color serves a purpose for the mushroom, “there are more theories than there are actual facts,” Padamsee says. The bright color could attract birds, which may carry spores from one place to another, Padamsee says, though E. hochstetteri is known to disperse by wind. Padamsee also suspects that the color could potentially attract or deter insects.

Whatever purpose the hue serves, Padamsee says mycophiles are thrilled to meet E. hochstetteri in New Zealand’s forests. The little blue mushrooms really stand out against landscapes that are largely a medley of muted whites, greens, and browns. “Then you have a pop of bright blue, and that might be why everyone’s like, ‘Whoa,’” Padamsee says. “They’re definitely on lots of people’s bucket lists.”

And that's bad news for the snails that produced them.
islands

The adorable appearance highlights an unexpected ally in conservation.
forests

High in the branches of the Pacific Northwest, entire ecosystems know nothing of the ground below.
Video