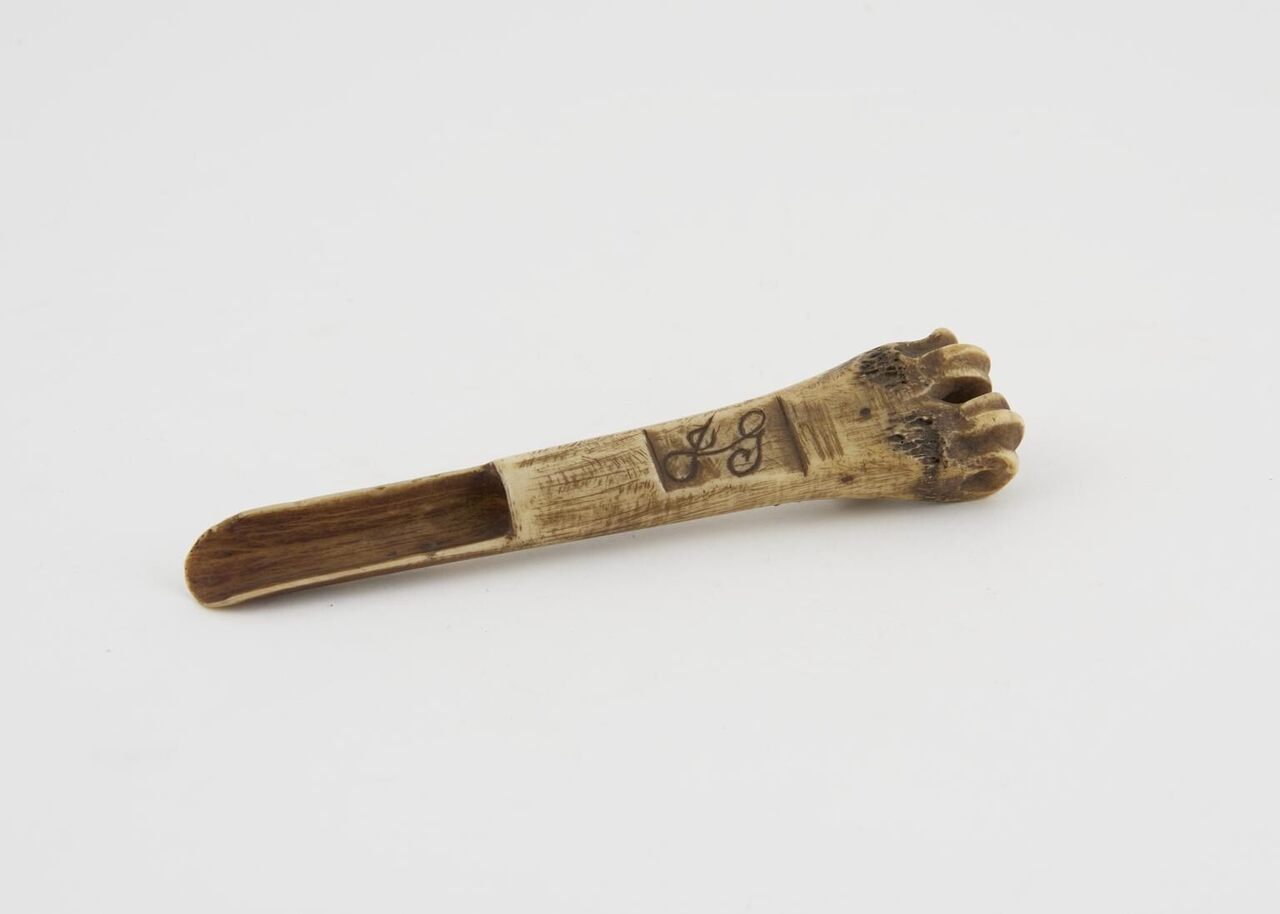 An apple scoop carved from a sheep's tibia, European, 19th century. Science Museum Group/CC BY 4.0
In This Story
Destination Guide

These tools may look rough, but in the right hands they could be surprisingly precise. A British country magazine from 1958 contains this account of a man describing how his mother used hers: With a scoop in one hand, and an apple in the other, she would carve away the fruit’s flesh until nothing was left but a hollow skin, which would “crumple in the hand like paper.”

Yes, these were apple scoops, and their purpose was quite practical: In the days before widely accessible dentures, they allowed the elderly and toothless to enjoy fresh apples without straining their remaining teeth.

The scoops date as far back as the 1600s, and were used through the early 1900s. During their heyday, dentures were a luxury item—quite literally crafted from ivory and gold. The teeth in the very best dentures were not carved or molded, but rather scavenged from human beings: extracted from the mouths of the recently dead by grave-robbers, or plucked from slain soldiers on the battlefield (a practice that earned them the name “Waterloo teeth”). Live donors were another option: The desperately poor could make a penny or two by allowing their teeth to be ripped out and rehomed in wealthy gums.

For this reason, dentures were not usually an option for the working class. Apple scoops, in contrast, were crafted from the most accessible of materials: sheep bones. And they could be easily made at home. John Clare, the quintessential poet of the English rural life, describes shepherds whittling away at sheep bones while waiting out a storm:

Beneath a meadow bridge, whose arch was dry,
Some swains sought shelter till a shower was by…
Some spent the hour in leisure’s pleasant toil,
Making their apple-scoops of bone the while.

Apple scoops may have been cheap, but skill and creativity could make them beautiful. Some have handles delicately pierced like lacy gothic windows. Others are etched with bold red zig-zags. A few bear initials, hearts, or mottos, hinting at the lives of the people who once carried them. One can imagine Clare’s whittling shepherds eking out a few more rainy hours by adding another little flourish to their design.

For rural people, these bone scoops were part of an apple-centric way of life. Henry Bull’s The Herefordshire Pomona, an 1876 encyclopedia of English apples, presents a world in which apples mark each step of the yearly festive calendar, from the blessing of the new apples on St. James Day, to wassailing in the apple orchard on Twelfth Night, with no shortage of stops in between: On St. Simon and St. Jude’s Day, young women tossed apple shavings over their shoulders in hopes that the peels would land in the shape of their future husband’s first initial. Halloween meant snap-apple, a game played by constructing a kind of chandelier with an apple on one end and a lit candle on the other. Once you set it swinging, the objective was to grab a bite without being burned. Perhaps the most appetizing tradition was “lamb’s wool,” a dish made by steaming apples on a string above a pot of hot ale until they melt into a cloud of white froth—a good solution for any apple-lover lacking both teeth and sheep-bone scoops.

Yet in the few decades between Clare’s poem and Bull’s encyclopedia, apple scoops began to vanish. As Bull wistfully recalls, “Some fifty or sixty years ago, apple-scoops were in general use, and were even placed on the dessert table with a dish of apples, as crackers are with nuts… but the fashion has changed, and it is rare now to meet with one of the old bone scoops, and still more rare to see any person scooping an apple in the old-fashioned way.”

The decisive moment came in 1839, when Charles Goodyear discovered the vulcanization process for hardening rubber. As cheaper rubber dentures became more widely available, sheep-bone apple scoops—once a common tool, in use for centuries—quietly faded away. It’s no wonder people chose to leave them in the past; the tools only existed because people were subjected to a form of suffering that was eminently treatable. And yet, the people who crafted them made them beautiful, and the people who used them wielded them with impressive skill.

Does This Medieval Fresco Show A Hallucinogenic Mushroom in the Garden of Eden?

This mosaic is trash.
objects of intrigue

For computer-graphics researchers, it's both a tool and a meme.
disasters

Why a New Orleans Museum Displays a Can of Water

It's a memory from the days after Hurricane Katrina.
objects of intrigue

Are these cakes weapons against dark forces or just “spiky bagels”?
Video • Object of Intrigue

At this historic pub, you can sit back, sip, and watch a whole century go by.
Nottinghamshire, England