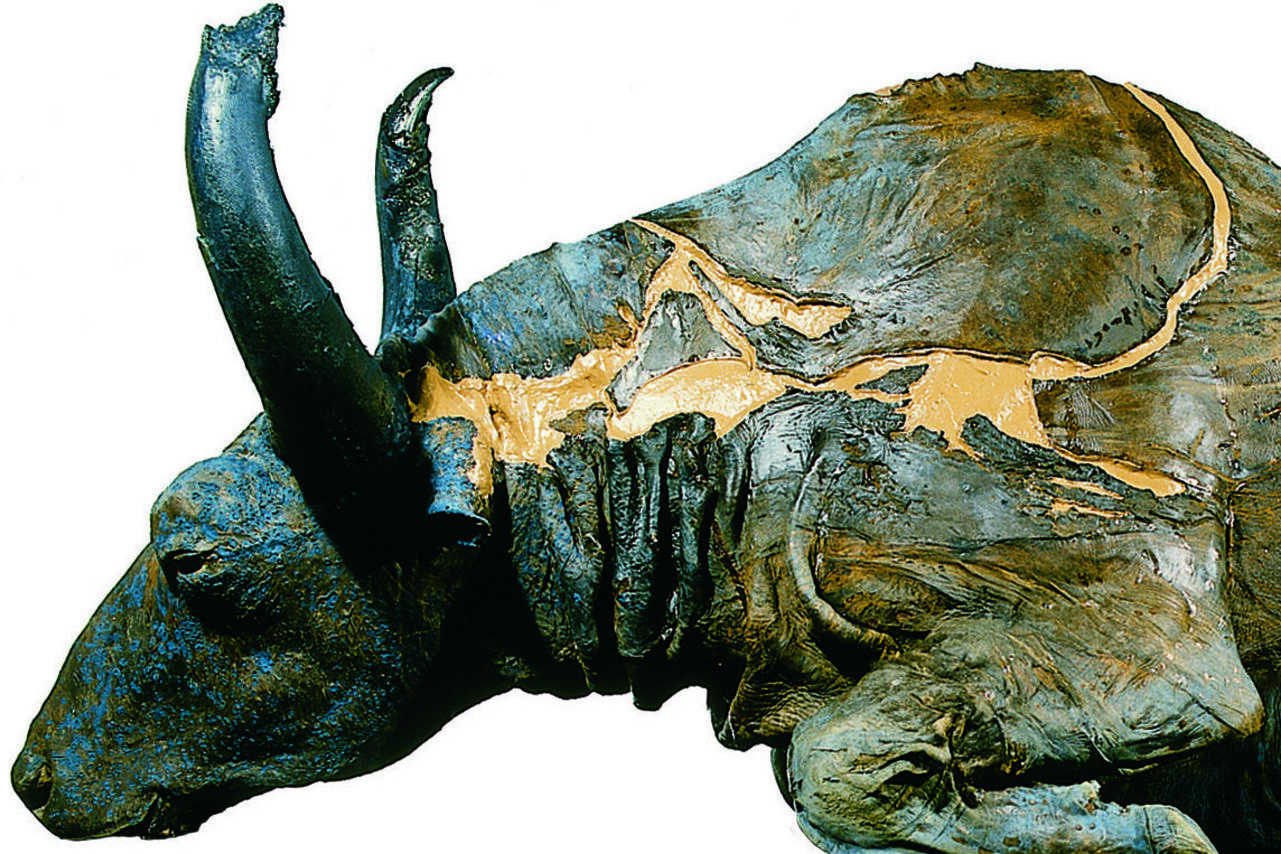 Blue Babe, in all its glory. UA Museum of the North

One night in 1984, a handful of lucky guests gathered at the Alaska home of paleontologist Dale Guthrie to eat stew crafted from a once-in-a-lifetime delicacy: the neck meat of an ancient, recently-discovered bison nicknamed Blue Babe.

The dinner party fit Alaska tradition: Since state law bans the buying, bartering, and selling of game meats, you can’t find local favorites such as caribou stew at restaurants. Those dishes are enjoyed when hunters host a gathering. But their meat source is usually the moose population—not a preserved piece of biological history.

Blue Babe had been discovered just five years earlier by gold miners, who noticed that a hydraulic mining hose melted part of the gunk that had kept the bison frozen. They reported their findings to the nearby University of Alaska Fairbanks. Concerned that it would decompose, Guthrie—then a professor and researcher at the university—opted to dig out Blue Babe immediately. But the icy, impenetrable surroundings made that challenging. So he cut off what he could, refroze it, and waited for the head and neck to thaw.

Soon, Guthrie and his team had Blue Babe on campus and started learning more about the ancient animal. They knew that it had perished about 36,000 years ago, thanks to radiocarbon dating. (Though new research shows that Blue Babe is at least 50,000 years old, according to the university’s Curator of Archaeology, Josh Reuther.) Tooth marks and claw marks also suggested that the bison was killed by an ancestor of the lion, the Panthera leoatrox.

Blue Babe froze rapidly following its death—perhaps the result of a wintertime demise. Researchers were amazed to find that Blue Babe had frozen so well that its muscle tissue retained a texture not unlike beef jerky. Its fatty skin and bone marrow remained intact, too, even after thousands of years. So why not try eating part of it?

It had been done before. “All of us working on this thing had heard the tales of the Russians [who] excavated things like bison and mammoth in the Far North [that] were frozen enough to eat,” Guthrie says of several infamous meals. “So we decided, ‘You know what we can do? Make a meal using this bison.’”

Guthrie decided to host the special dinner when taxidermist Eirik Granqvist completed his work on Blue Babe and the late Björn Kurtén was in town to give a guest lecture. “Making neck steak didn’t sound like a very good idea,” Guthrie recalls. “But you know, what we could do is put a lot of vegetables and spices, and it wouldn’t be too bad.”

To make the stew for roughly eight people, Guthrie cut off a small part of the bison’s neck, where the meat had frozen while fresh. “When it thawed, it gave off an unmistakable beef aroma, not unpleasantly mixed with a faint smell of the earth in which it was found, with a touch of mushroom,” he once wrote. They then added a generous amount of garlic and onions, along with carrots and potatoes, to the aged meat. Couple that with wine, and it became a full-fledged dinner.

Guthrie, who is a hunter, says he wasn’t deterred by the thousands of years the bison had aged, nor the prospect of getting sick. “That would take a very special kind of microorganism [to make me sick],” he says. “And I eat frozen meat all the time, of animals that I kill or my neighbors kill. And they do get kind of old after three years in the freezer.”

Thankfully, everyone present lived to tell the tale (and the bison remains on display at the University of Alaska Museum of the North). The Blue Babe stew wasn’t unpalatable, either, according to Guthrie. “It tasted a little bit like what I would have expected, with a little bit of wring of mud,” he says. “But it wasn’t that bad. Not so bad that we couldn’t each have a bowl.” He can’t remember if anyone present had seconds, though.

Ancient Mesoamericans Calmed Down and Hooked Up in Sweaty Steam Baths

Kansas City Is Now Home to a BBQ Vending Machine

Burnt ends at the push of a button!
caves

For skeptics, no amount of crab legs and speared shark are enough to upend the caveman stereotype.
Video • Gastro Obscura

Dine like an American revolutionary at Colonial Williamsburg.
Vienna, Austria

Visiting this café is like visiting the Austrian grandma you wish you had.
Córdoba, Spain