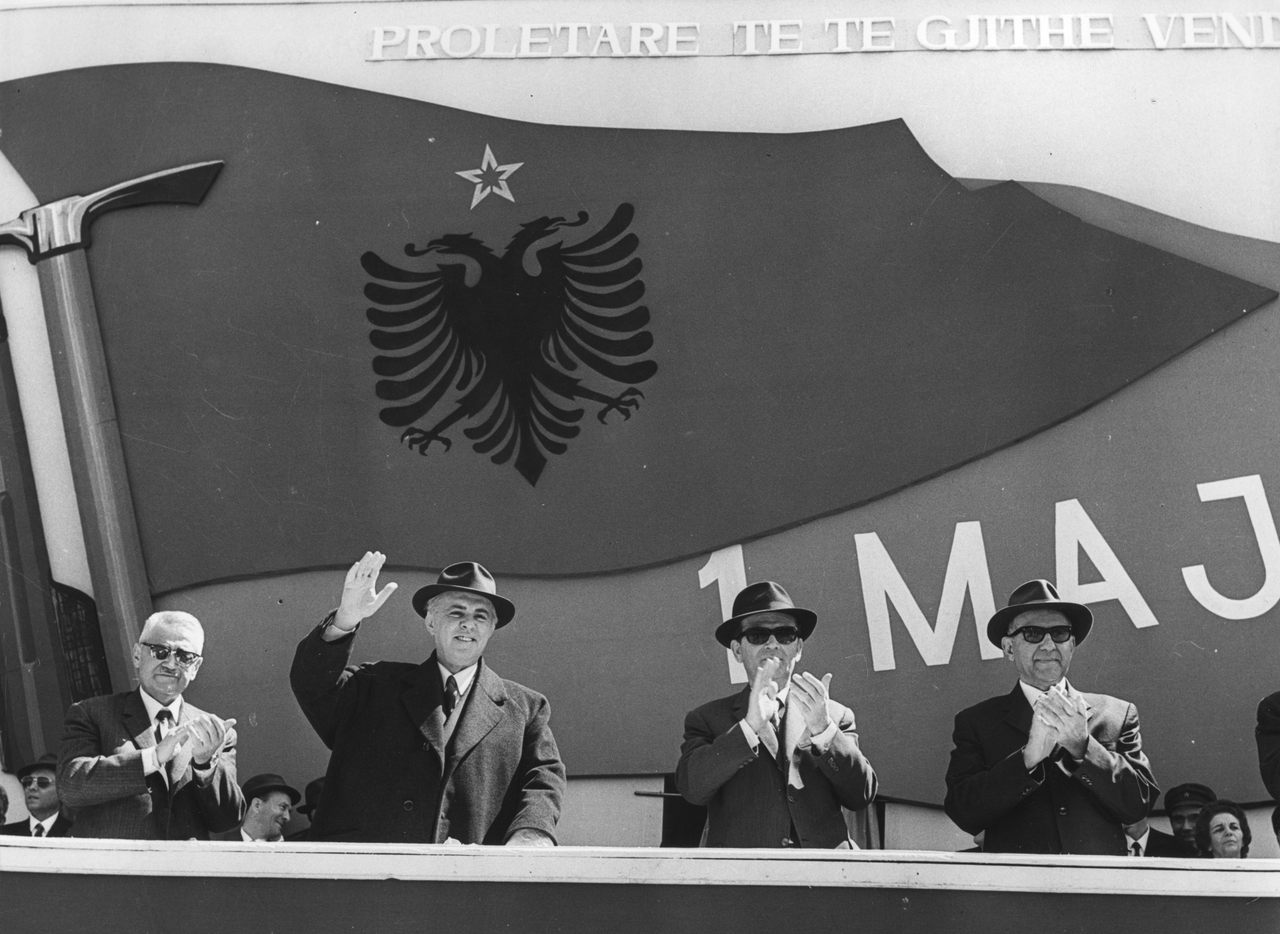 Communist officials from the ruling Albanian Party of Labour including Enver Hoxha, 2nd from left, wave and clap during national celebrations, 1973. Keystone/Getty Images
In This Story
Destination Guide

In 1990, faced with the imminent fall of a five-decade reign in Albania, the Communist government needed to destroy immense amounts of paperwork. As the country held its first democratic elections in 50 years, some 29,000 files disappeared—generally assumed to detail the crimes committed by the regime and identify those who perpetrated them. But until recently, the secret recipe of how so many documents were so quickly destroyed remained a mystery.

Unlike other nations behind the Iron Curtain, Albania did not set up a system for releasing its secret police files. Only in the last decade did the Albanian government open up the remaining archives from the Communist era—thought to be only about 10 percent of what once existed. But they reveal the secret of just how so much information disappeared so quickly: It was turned into dough.

In Albania, the way you ask if someone is hungry translates to “Do you want to eat bread?” and hospitality is defined as “Bread, salt, and heart.” Bread is to Albanian cuisine what rice is to Chinese and tortillas are to Mexican: the staple and centerpiece. But in 1975, when Albania’s Ministry of Internal Affairs needed to destroy large amounts of paper, its leaders came up with a solution that transformed a kitchen mixer into an instrument of repression.

Using the same type of mixer one might use for kneading bread, the government created a recipe for a far less satisfying dough. Per the calculations by engineers working for the secretive government, with the addition of only water, which they piped into a specially designed room in the Ministry’s office, their mixers could obliviate almost a ton of documents each hour. (For reference, the shredder U.S. National Security Council aide Lt. Col. Oliver North used to destroy documents relating to the Iran-Contra scandal more than a decade later worked through about 75 pounds an hour.)

An exhibit at Bunk’Art 2, a museum in Tirana, Albania, includes the key documents for understanding how the files were destroyed: A 1975 estimate for parts and labor for the mixers, the 1976 confirmation of purchase, and directions for how the pulping would work from the same year.

“Documents that would be annihilated were put in piles in the pastry maker, and with the addition of water, they were turned into dough,” a sign explains. The displayed documents detail the minimum of 10 liters of water per second needed for the process, and that in 60 minutes, the machine could work through up to 800 kilograms of paper. “The dough was loaded on trucks and spilled into rivers or buried underground,” explains the exhibit.

“This wasn’t something that happened overnight. There was a system in place,” says Elidor Mëhilli, an Associate Professor of History and Public Policy at Hunter College, who spent the first half of his life in Albania and now studies both the contents of the archives and the issues surrounding them.

The original target of the informational slurry was likely not evidence of the government’s crimes, says Mëhilli, but any written or printed material considered to have “dangerous ideas” that went against the regime—banned books, revolutionary pamphlets, and even something as simple as a scientific journal that contained a photo of Western civilization.

The 1970s, when the program began, represented a significant turning point for the regime: Albania’s early Communist years were defined by its ties to the Soviet Union, but dictator Enver Hoxha felt the USSR became too liberal following Stalin’s death. China took over as the country’s prime benefactor and external contact, but by the mid ‘70s, that relationship, too, began to wane. Hoxha became increasingly isolationist, and Albanian suffered economically and otherwise. Mëhilli describes 1974 and 1975 as a period with a huge crackdown on dissent and the potential for it, via outside influences entering the country. “There was so much heightened awareness about how dangerous it was to go against the regime.”

A side effect of the isolationist mindset and the government’s obsession with surveillance was an ever-increasing amount of highly classified paperwork, which necessitated regular destruction of files after certain periods of time. The machines designed for destroying literature deemed anti-regime found themselves with long-term job security.

But in 1990, with the end nigh for the regime, everything fell into the category of needing to be destroyed immediately. Luckily, the government already knew how to rapidly eliminate information using a tool in their offices—those same modified pastry-makers. A week after the start of student protests that eventually brought about multi-party elections, the Minister of the Interior sent a telegram to the internal affairs branch in each district of Albania stating: “To be destroyed without waiting for the representatives of the Ministry, all dossiers of collaborators.” The task should be performed immediately, it added, and also that this was all very normal and not at all related to “the situation.”

The surviving files illuminate small details, such as the exact method of destruction and where the Ministry of Affairs would pipe the water in from, but they solve just one piece of the puzzle researchers have worked on for decades. They don’t tell families of the more than 6,000 people still missing from the Communist era what happened to their mothers, fathers, and children.

“We do have enough to go by to understand the logic and the state,” though, says Mëhilli, largely from oral histories and memoirs. Darkly, he also notes that we have enough information to know how this all started. “The censorship got tighter; they went around literally hunting for books.” Mëhilli says. “I laugh when I hear these debates [in the U.S., today] about banning books, because this is exactly what they did in Albania in the 1970s.”

How a Self-Trained Italian Blacksmith Built Himself an Amusement Park

Gold miners made themselves sick on smelly, hard loaves.
medieval

A crusty, dense bread got the country's hardworking equines through long days.
food

The Italian Town Where You Can Eat Like a Renaissance Royal

It's not just bread; it's a way of life.
Video • Gastro Obscura