9 Tombs That Prove You Don't Have to Be a Pharaoh to Be Buried Under a Pyramid - Atlas Obscura
Want to see fewer ads? Become a Member. 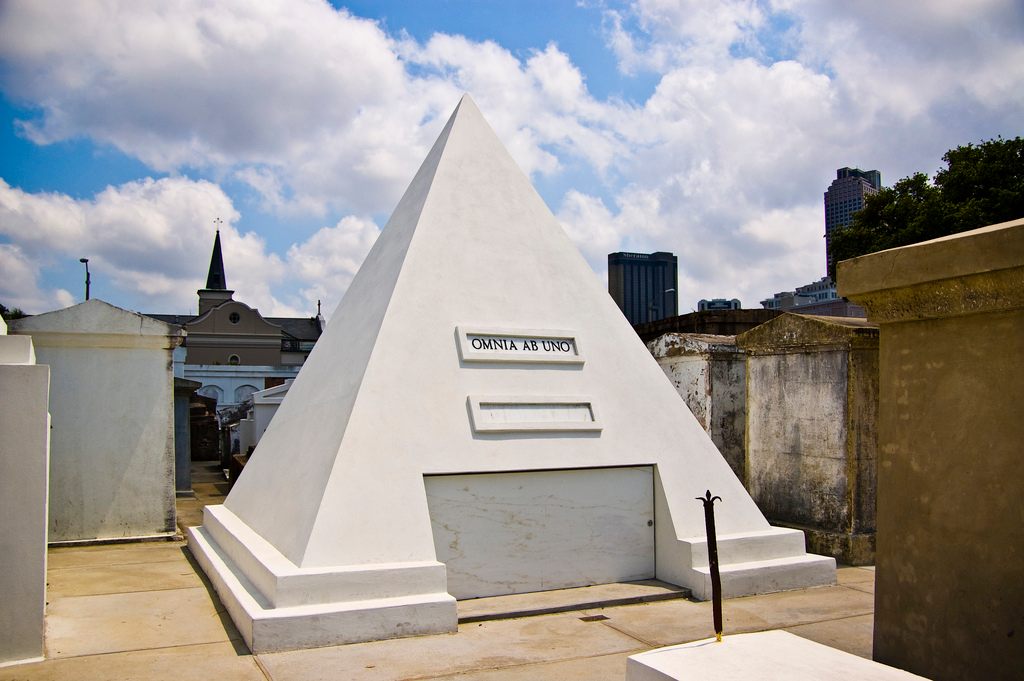 In 2010, Nicolas Cage purchased two plots in this cemetery using one to construct this strange pyramid mausoleum.
Place

This burial pyramid in central Ireland is thousands of miles and thousands of years away from its Egyptian inspiration.
Place

This pyramid in southern Sweden houses the remains of an eccentric nobleman, who spent his life doing whatever he felt like doing.

The pyramid has been a symbol for burial and the afterlife for some 5,000 years—from the ancient pharaohs to Nic Cage, who commissioned his own pyramid vault just this decade. How this particular shape became linked with the realm of the dead is, however, still a matter of some mystery.

The most common theory is that the first Egyptian pyramids were designed to resemble the mound that, according to ancient religion, arose from the primordial waters with the creator god upon it, and from which the Earth was created. As a burial monument, the symbolism of new life represented the transition to the afterlife. In fact, some theories even suggest that the pyramid shape, particularly the early step pyramids, were meant as a literal stairway to the heavens, to help guide the pharaoh’s soul after it left the body on its ascent to join the gods in the sky.

Whatever the origins, the burial pyramid stuck, and not just in Egypt. As cultures became more connected and Egyptomania spread through the Middle East and beyond, the pyramid tomb spread with it. The ancient Nubian pyramids (in modern-day Sudan), were inspired by the entombed pharaohs of the Valley of the Kings, and eventually became so seeped in the culture every wealthy merchant wanted a pyramid to house their mortal remains.

The trendy tomb spread through Europe and into Asia and the Americas, and now several thousand years later the globe is dotted with burial pyramids serving as gateways to the afterlife.

The most recent example of a pyramid tomb belongs to actor Nicolas Cage. Long known for his eccentric behavior both in front of the camera and in the real world, it seems he plans to continue this legacy into death as well, having purchased an odd pyramid mausoleum in New Orleans’ beloved St. Louis Cemetery No. 1.

The unnamed, empty grave is a stark, nine-foot-tall stone pyramid emblazoned with the Latin maxim, “Omni Ab Uno,” which translates to “Everything From One.” Some think the pyramid is evidence of the actor’s ties to the probably-fictitious secret Illuminati society. Because of antique portraits bearing an uncanny resemblance to Cage that have surfaced online, the more paranormally minded suggest that the pyramid is where Cage will regenerate his immortal self. The actor himself has chosen to remain silent about his reasoning for the flamboyant tomb.

Egyptomania first gripped Rome in the wake of the conquest of Egypt in 30 BC, and soon massive original artifacts and inspired copies cropped up all over the city. But only two actual pyramids were known to have been built, and only one remains.

The Pyramid of Cestius was most likely built between 18 and 12 BC as a tomb for a wealthy Roman under the sway of all things Egyptian. Little is known about the man who may have once been buried here since the tomb was long ago ransacked and the land around it has changed dramatically over the centuries. Originally the interior of his tomb was decorated with lively frescoes, described in detail by early travelers, but now mostly gone. Between 271 and 275 the burial site was built into the fortifications of the Aurelian walls, which likely helped it survive the centuries.

Pyramid-shaped tombs spread as those with means to travel were inspired by the awesome sight of the Egyptian wonders. A few thousand years after the ancient Egyptian pyramids were erected, a 19th century Irish nobleman may have seen the pharaoh’s extraordinary mausoleum and thought, “I could use one of those myself.” And so Ireland’s Kinnitty pyramid was built.

The Kinnitty pyramid is a made-to-scale replica of the Great Pyramid of Giza. It is the burial tomb of six members of the Bernard family, once the wealthy landowners and owners of the nearby Kinnitty Castle. It’s thought that the master of the Castle, Lt. Col. Richard Wesley Bernard, did a tour of duty in Egypt in the early 19th century where he likely saw the architecture of the ancients. Being trained in engineering and architecture himself, it may have inspired his embarking on the construction of a 30-foot pyramid in the graveyard of Kinnitty’s village church.

The Swedes have a nickname for the eccentric nobleman who built himself a pyramid tomb in the middle of the south Swedish highlands: “Mannen som gjorde vad som föll honom in,” or “The man who did what he wanted.”

Georg Malte Gustav August Liewen Stierngranat was expected to stick around the manor house and take over the family farm. Instead he traveled the world, acquiring along the way the title of “engineer,” a reputation as an expert art restorer, an invitation to the White House from President Roosevelt, a wealthy wife, and a castle. Nearing the end of his life he completed one final feat: a burial pyramid modeled after those he had seen during a trip to Egypt. Malte Stierngranat carried his eccentric spirit into the afterlife. Until the very end, he remained a man who did what he wanted.

Egypt’s Valley of the Kings may have had the biggest influence on the ancient necropolis world, and its monumental structures are justly celebrated. But many other rulers around the world were buried in extravagant tombs and vast burial complexes. Some of these alternate pyramids come in even more original shapes, and it’s high time we gave them our attention.

The West Xia Imperial Tombs in Yinchuan, China, for instance, are shaped like giant beehives and dot the valleys of the region. In the entire burial area there are nine massive mausoleums, along with 250 lesser tombs. The mausoleums hold the remains of the imperial leaders of China’s Western Xia Dynasty.

Equally marvelous are the Chaukhandi Tombs near Karachi, Pakistan. They are constructed out of huge sandstone slabs, which are delicately stacked into a finessed pyramid shape. The slabs were then painstakingly carved with intricate patterns, drawings, and relatable scenes. Built between the 15th and 18th centuries, the Chaukhandi Tombs now form a remarkably well-preserved necropolis.

Egypt is well-known for its famous block pyramids, but they are not the only pyramids in the country. There are also less photogenic examples of triangular tombs that have not weathered the ages quite so well, like the Pyramid of Senusret II. Senusret II ruled Egypt at the end of the 18th century BC. When he died, he was placed in a pyramid tomb like many Egyptian rulers before and since. However Senusret II’s tomb, like his father’s, was a bit of a cheat architecturally.

Unlike the pyramids of Giza, which were made with limestone blocks, the tomb of Senusret II was made of mud bricks supported by a limestone base. Were the pyramid left intact, it likely would have survived somewhat better into the modern age, but unfortunately the outer casings were later scavenged by Ramses II for his own monumental purposes, leaving the mud brick exposed. Over the centuries, chunks of it fell away. But not all was lost, and miraculously the remains of the weaker brick pyramid remain to this day.

One of the more mysterious examples of American pyramid tombs is the Dorn Pyramid in San Luis Obispo, California. In 1905 a wealthy lawyer, Fred Adolphus Dorn, lost his wife and son during childbirth and in their honor erected a mysterious pyramid tomb. The front of the tomb bears the eerie words “DISTVRB NOT THE SLEEP OF DEATH.” Two stones lie in front of the door waiting to be cemented in place once all the Dorns are laid to rest inside.

The pyramid where MacKenzie is interred. (Photo: NeilEvans/Public Domain)

The story of this 19th century Liverpool obelisk, often told as a sworn truth, goes that William MacKenzie was a keen gambler and left instructions that he should be entombed above ground within the pyramid, sitting upright at a card table and clutching a winning hand of cards. Some tellers go one step further, believing that MacKenzie decided against committing his body to the earth as a means of cheating Satan out of claiming his immortal soul.

In truth, several such monuments can be seen in graveyards across the British Isles, some of them even having remarkably similar tales attached. In fact, MacKenzie was buried beneath the pyramid, rather than entombed inside like the ancient Egyptians so many centuries before him.

Consider this your burial marker mood board.
mummies

It's not just Egypt that has embraced the practice.
cemeteries

For a time, eating and relaxing among the dead was a national pastime.
Video • PinDrop