Spend a weekend immersed in the rich history, deeply rooted tradition, and constantly evolving art-scape of northern New Mexico. We’ll weave our way through Santa Fe and beyond, taking a behind-the-scenes tour of Santa Fe’s artist studios, exploring an adobe farmhouse replete with new media art, and learning the ins and outs of crafting traditional Pueblo pottery. Alongside local artists and tribal members, we’ll delve into the region’s history and heritage, joining our host for a homemade feast-day style meal, dipping our fingers into the healing soil of El Santuario de Chimayo, and satisfying our palates with some famously sweet and smoky heirloom Chimayo peppers.

After settling into the city, we’ll stroll through the historic Santa Fe Plaza and hit Todos Santos for a hand-crafted chocolate truffle. This sweet pick-me-up will fuel our first adventure: a private tour of the home and studio of Randall Davey, the late Santa Fe Art Colony painter. A relic of 1920s Santa Fe, his coral-hued abode is outfitted with a secret, Prohibition-era bar where he once entertained his creative entourage over contraband spirits. Later, we’ll wind our way through the city’s renowned Canyon Road arts district, which boasts around 80 galleries tucked away in centuries-old adobe homes. We’ll stop by Art House, a 19th-century farmhouse featuring new media art, to enjoy an exquisite pairing of wine and immersive, contemporary art. Later, we’ll head to La Choza, a restaurant known for its classic New Mexican cuisine, piquant red and green chile, and delightfully extensive margarita menu.

Wake up early to browse the bustling Santa Fe Farmers’ Market before hitting the road. Our first stop will be San Ildefonso Pueblo, where we’ll meet with a local artist for a demonstration and discussion of crafting the region’s famous black-on-black Pueblo pottery. In the afternoon, we’ll join a former tribal governor for a traditional feast-day-style meal. We’ll have the chance to chat with him about Pueblo tradition and culture over delicious, homemade dishes, perhaps including pueblo bread, a twisted loaf with a complex history. Later, we’ll make our way to El Santuario de Chimayo, a Catholic pilgrimage site steeped in mystery, where we’ll collect ‘holy dirt,’ soil that’s believed to have healing powers. We’ll also stop at Ortega’s, a shop that’s continued the tradition of Rio Grande Weaving since the early 18th century, and sample some Chimayo chile—a small, red pepper with a huge, cult-like following. With warmth in our hearts and mouths, we’ll return to Santa Fe for a leisurely night of independent exploration.

Today, we’ll slip inside a few private studios for an intimate look at the work produced by contemporary artists working across a variety of mediums. Inside the Santa Fe artist studios, we may enter altered states in the studio of Stephen Auger, mingle with exploratory holographics artist August Muth, talk contemporary figure painting with Dorielle Caimi—among countless other local artists. In the afternoon, we’ll head to the Santa Fe Railyard for a farewell lunch at Cafe Sonder before heading back to The Plaza to say our goodbyes. 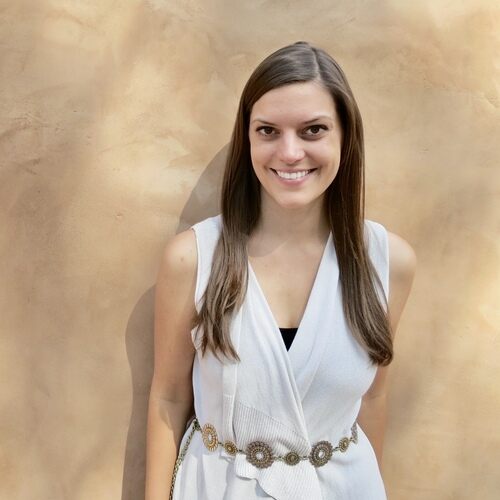 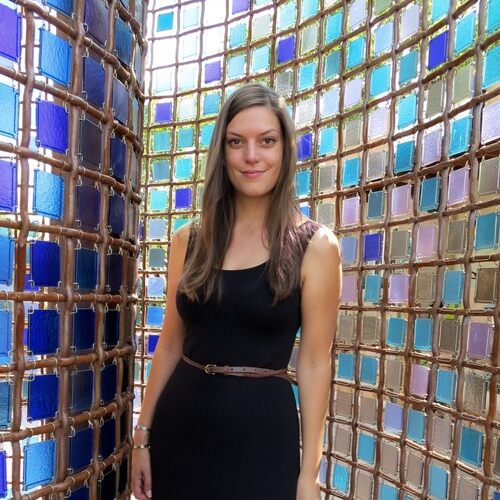 Elaine fell in love with art at the age of five. She can still remember being struck by the vibrant colors of van Gogh and Monet—and it’s this same fascination and curiosity that inspires the tours she leads today. She holds a master's degree in Art History and has worked as a gallery teacher and art museum educator in the US and abroad. She specializes in discussion-based teaching and creates meaningful, art-centered experiences that promote visual literacy, inspire personal awareness, and deepen connections with the world around us. After a three-year stint in Croatia, where she worked at the Museum of Contemporary Art in Zagreb and the Croatian Association of Artists, Elaine returned to New Mexico to launch Santa Fe Art Tours. When she's not gathering people together around great works of art, Elaine enjoys exploring the desert landscapes of northern New Mexico and relaxing at her adobe casita with a good book. Elaine is also an arts, culture, and travel writer.

We’ll meet our group at The Plaza in downtown Santa Fe at 12:30 pm on Friday. The Santa Fe Plaza is located in downtown Santa Fe, roughly an hour from Albuquerque International Airport, or 20 minutes from Santa Fe Regional Airport. We recommend arriving in Santa Fe no later than 10:30 a.m. so you can settle in before meeting up with the group. Our trip will conclude on the morning of Sunday. You can make arrangements to fly out of Santa Fe or Albuquerque or feel free to stick around in Santa Fe and explore the city on your own.

There are a variety of wonderful hotel and Airbnb options available in Santa Fe. Accommodations are not included in your trip, but we recommend staying in downtown Santa Fe. If you’d like accommodation recommendations, our guide is happy to suggest several lovely local hotels. Email trips@atlasobscura.com if you’d like assistance with lodging.

This trip entails some light activity. Travelers should feel comfortable walking one to two miles outdoors each day.

Note that Santa Fe, New Mexico stands at 7,100 feet in elevation, which can make physical activity more demanding. Altitude affects some more than others; if you are sensitive to altitude, we encourage you to arrive a day or two early to acclimate.

Can dietary restrictions be accommodated?

Most dietary restrictions can be accommodated. Let us know your restrictions ahead of time by emailing trips@atlasobscura.com so we can work with your trip leader to make arrangements.

The weather in Santa Fe in June is warm and dry. You can expect highs of 82° F during the day and average lows of 50°F.

Your participation helps support Santa Fe’s creative economy. By engaging with artists and artisans from different backgrounds, you're also helping to recognize northern New Mexico’s various cultures, histories, and narratives. You can increase your impact by sharing the stories of your experiences here, and, if you wish, by purchasing art during the trip.

Booking and payment processing partners may vary with departure date. Please see our full Terms and Conditions here.
We’re here to help. If you still have questions about the trip, just ask.
Email Us
Other Trips You Might Like
art & performance

Santa Fe
From $2,540 USD
Join us in the mysterious desert landscapes that have captivated artists from Georgia O’Keeffe to Judy Chicago.
Learn More
science & nature

Utah
From $1,655 USD
Led by an expert avian biologist, experience one of the most secretive owl species in North America.
Learn More
photography

Beyond the Quarter: Music and Reinvention in New Orleans

New Orleans
From $1,415 USD
Explore the rich soundscape of New Orleans, tracing the social, political, and spiritual roles these traditions have played throughout history and in contemporary culture.
Learn More
art & performance

Pay in full today and cancel up to 30 days before departure with no penalty.

Place a hold today, pay in full 60 days before departure. Cancel free of charge within 72 hours of placing your hold; otherwise, a $500 fee applies.

Airbnb is an official booking partner of Atlas Obscura Trips. For more information, see our FAQ.

Your hold is confirmed.
Thank you for for joining us on our trip. We're looking forward to sharing an unforgettable experience with you.
Check your inbox for a confirmation email with more details and next steps.
View On Airbnb
• Santa Fe Weekend: New Art, Ancient Traditions

Spain
From $3,380 USD
On this week-long seafood pilgrimage, we’ll delve deep into the world of barnacle hunters, oyster fisherman, lobster trap builders, razor clam-diggers, and net menders, along with the local chefs who are harnessing the incredible offerings of their coast, transforming Galician cuisine into something new and exciting.
Learn More
photography

Rome
From $3,425 USD
Join us as we go beneath Rome’s streets and behind its locked doors to explore hidden and overlooked places, witnessing a capital city that most tourists rarely experience—strange, magical, and filled with intrigue.
Learn More
culinary adventures

Lisbon
From $3,820 USD
Journey beyond the city’s tiled buildings and narrow streets to discover the long legacy and vibrant present of culinary inventiveness in Lisbon.
Learn More