We've got your back.

When you join one of our trips, we want you to have peace of mind.

Join us for six days as we eat our way through Montréal, home to Canada’s oldest and most diverse Jewish community. Between bites of meze, falafel, and rugelach, we'll uncover Jewish culinary traditions. Across the city and beyond its limits, we'll meet chefs, rabbis, and local experts who will show us how food and history intersect and introduce us to Ashkenazi, Sephardic, and Mizrahi experiences. Along the way, the dishes we try and the people we meet will reveal the full, vibrant tapestry of the Jewish diaspora in Montréal.

Arrive in the afternoon and take some time to settle into our accommodations in the heart of the Plateau, the neighborhood where Ashkenazi Jews first settled in the early 20th century. Now a lively spot that’s popular among artists, academics, and more, it’s home to many charming cafes, music venues, shops, and restaurants. In the evening, we’ll gather at the Museum of Jewish Montréal for our first of many spectacular dinners together, meeting with Kat Romanow, a chef and historian committed to sharing a delicious diversity of dishes drawing from a myriad of Jewish culinary traditions. She’ll treat us to a four-course meal featuring foods from across the Jewish diaspora.

We’ll kick off the morning with a culinary walking tour of the Plateau and Mile End, led by the Museum of Jewish Montréal. As we weave through the neighborhood, we’ll unearth stories of stories of Montréal's ever-evolving Jewish culinary culture. We’ll end at a local bookstore, Drawn & Quarterly, where we can sift through stacks of books, independent magazines, and graphic novels that illustrate the city’s variegated and colorful cultural landscape. After all that walking, it’s time to eat! We’ll tuck into steaming pita wraps at Falafel Yoni before relaxing in Outremont Park, accompanied by a glass (or two) of wine. After you’ve recharged, feel free to explore the city on your own tonight. Consider perusing the massive, ever-changing Saint Laurent Boulevard murals; catching a show at La Sala Rossa, an 80-year-old venue that began as a left-wing Jewish gathering space; or sampling a smoked meat sandwich at Schwartz’s, an iconic Plateau deli that’s been serving up mouthwatering grub since 1928.

Nestled in the Laurentian Mountains north of Montréal, Sainte-Agathe-des-Monts is one of the few rural areas in Québec home to a longstanding Jewish community. Before embarking on our drive there (it should take us about an hour and a half), we’ll grab Montréal-style wood-fired bagels from Saint-Viateur Bakery to fuel our journey. Once we arrive, we’ll meet with a local rabbi and delve into the rich history of Sainte-Agathe over lunch and dessert—cookies and flaky rugelach from a nearby bakery. You’ll have the option to take a guided hike around the perimeter of the picturesque Lac des Sables, or explore the area at your own pace. We’ll reconvene for a stroll along the quiet beach before heading back to Montréal, where you can enjoy the rest of the night on your own.

We’ll begin the day with a guided tour of the Montréal Holocaust Museum, then dig into some kosher shawarma at the recently revamped Benny & Fils. After lunch, we’ll take a private tour of one of the oldest synagogues in North America, The Spanish and Portuguese Synagogue of Montréal, also known as Shearith Israel. The first synagogue and non-Catholic religious structure in Canada, Shearith Israel dates back to the late 18th century. Later, we’ll head to the neighborhood of Saint-Henri for a shared, meze-style dinner at Sumac, a popular restaurant serving up traditional Middle Eastern Jewish staples such as sabich, falafel, and piquant s’rug sauce, with a contemporary twist.

Made of 158 boxy, concrete residences and looming up to 12 stories high, Habitat 67 is one of Montréal’s most iconic structures. Now one of the most coveted (and controversial) residential complexes in Canada, it began as the thesis idea of Israeli-Canadian architect Moshe Safdie, initially intended to provide affordable, high-quality urban living conditions. We’ll begin the day touring the sprawling architectural wonder, then head to Fletcher’s Espace Culinaire for a hands-on bagel-making workshop which will, of course, end with the opportunity to devour our creations. Feel free to spend the rest of the afternoon wandering the Plateau on your own, relaxing with a cup of coffee, or scoping out nearby neighborhoods. Our trip will culminate tonight with a gastronomic hurrah at Mount-Royal—an outdoor farewell feast catered by Jewish restaurant Arthur’s Nosh Bar. We’ll raise a glass to our time together and end the night with a captivating concert featuring Sephardic music and performance.

After five immersive days of exploring, it's time to say so long to Montréal and the friends we've made along the way. Head to the airport, or on to your next destination. Until our next adventure! 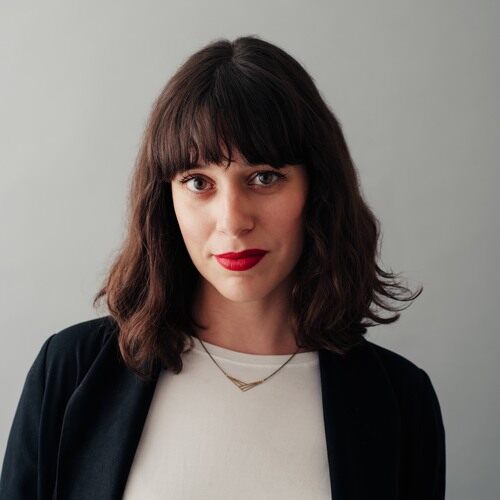 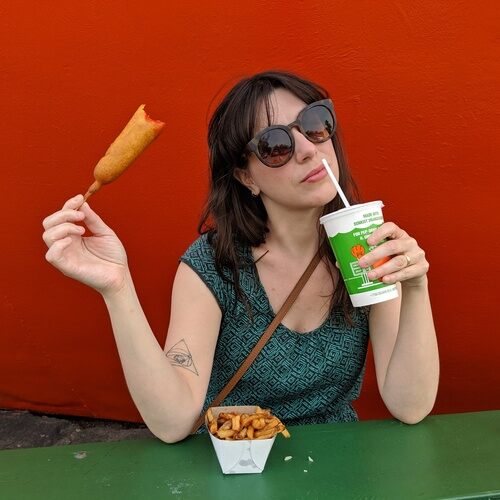 Caitlin is from Québec and has lived in Montréal for over 15 years. Also her mother’s hometown, Montréal is close to her heart—and she loves nothing more than to show visitors why they should fall for it too. Caitlin is also a translator, editor, and writer who has published articles about Jewish food and cultural heritage in Montréal. She served as the associate editor at Air Canada enRoute magazine and her writing has appeared in Elle Canada, Daily Xtra, Hazlitt, Maisonneuve Magazine, Vice, Paste, and Matrix. She’s excited to share some of her personal favorite spots with you, from what to eat to where to kick back in a park or pick up a good book.

You’re in good company. Solo travelers typically make up about half of our small groups. With curiosity at the center of our experiences, there’s a natural camaraderie that develops over the course of a trip. We have two options for you:

Shared Room: You’ll be matched with another solo traveler of the same gender.

Private Room: Have your own room, subject to availability, for a supplemental cost of $425. After booking your trip, please request a single room when you fill out your traveler information form and we’ll send a separate invoice for the cost.

Our trip begins with a welcome dinner in the Plateau neighborhood of Montréal. We recommend you arrive in Montréal by 2 p.m. on Day 1, so you can settle into our accommodations and meet the guide and group in time for dinner. Our trip concludes in the morning on Day 6. If you’ll be leaving Montréal directly after our trip, we’d recommend departing any time that day. If you'd like to extend your trip, we’re happy to provide suggestions for things to do in the city on your own.

Travelers should feel comfortable walking two to four miles each day, climbing stairs, and remaining on their feet for long periods of time. In addition to walking within the city, guided visits to museums, and exploration of several other sites, we’ll take an easy nature hike (approximately four miles) around a lake on mostly flat terrain while in Sainte-Agathe-des-Monts.

July in Montréal is usually a very pleasant time to walk around and explore the city. Daytime temperatures can reach up to around 80°F, dropping to the low 60s in the evenings.

Can dietary restrictions be accommodated?

Most dietary restrictions can be accommodated, though in most cases ingredients can't be substituted or omitted from particular dishes. If you have a severe allergy, please contact us to find out if this is the right trip for you.

Your participation in this trip helps support local restaurants, musicians, and the creators of cultural projects that aim to promote Jewish multiculturalism and inclusiveness in the city. You'll encounter a broad representation of a large community, and diving into its history, from past to present, helps keep a plurality of voices alive and heard.

Booking and payment processing partners may vary with departure date. Please see our full Terms and Conditions.
We’re here to help. If you still have questions about the trip, just ask.
Email Us
Other Trips You Might Like
culinary adventures

Mexico City
From $2,525 USD
Immerse yourself in the complex cultural identity of Mexico City through its street food, bustling markets, and well-seasoned history of gastronomic traditions.
Learn More
art & performance

Santa Fe
From $2,540 USD
Join us in the mysterious desert landscapes that have captivated artists from Georgia O’Keeffe to Judy Chicago.
Learn More
art & performance

New Orleans
From $2,440 USD
Get to know the art, history, and dynamic culture of New Orleans—and the people who bring it to life.
Learn More
science & nature

Science After Dark: Spotting Squid in the Tides of Oahu

Hawaii
From $3,535 USD
Just beneath the waves off the Hawaiian coast, there are schools of tropical fish, flotillas of sea turtles, and squads of squid. We’re diving in to explore some of their secrets.
Learn More
history & culture

Your booking is confirmed.
Thank you for for joining us on our trip. We're looking forward to sharing an unforgettable experience with you.
Check your inbox for a confirmation email with more details and next steps.
Tastes & Traditions of Jewish Montréal

Or book now on Airbnb

When will I pay?

Your card will not be charged today. Full payment will be due 60 days before departure via Airbnb, an official booking partner of Atlas Obscura Trips.

How much will it cost to cancel?

Cancel for free up to three days after booking. After that, there is a $500 cancellation fee per traveler.

Your booking is confirmed.
Thank you for for joining us on our trip. We're looking forward to sharing an unforgettable experience with you.
Check your inbox for a confirmation email with more details and next steps.
View On Airbnb
Tastes &amp; Traditions of Jewish Montréal

Lisbon
From $3,820 USD
Journey beyond the city’s tiled buildings and narrow streets to discover the long legacy and vibrant present of culinary inventiveness in Lisbon.
Learn More
new addition

Chernobyl by Day, Kyiv by Night