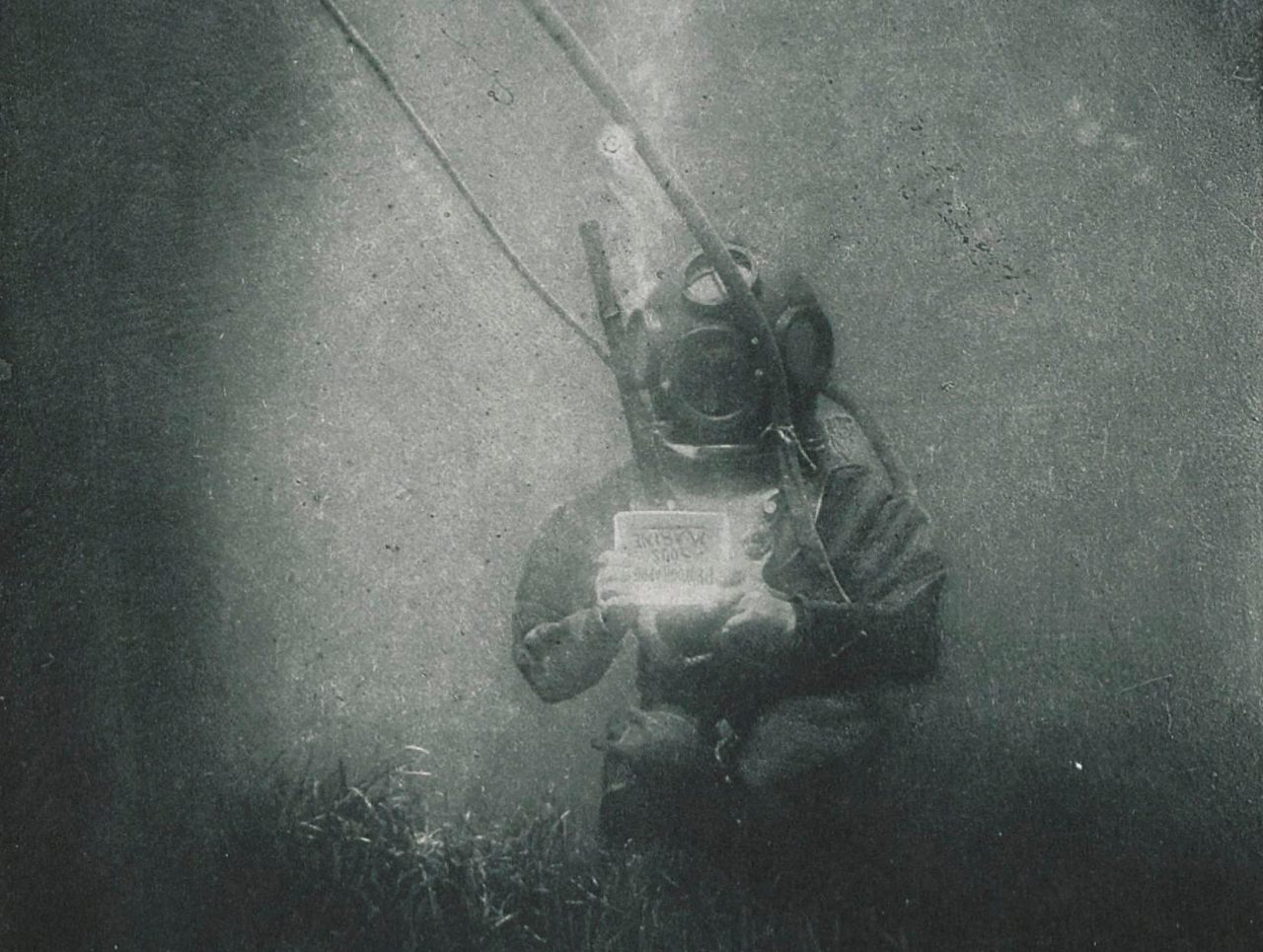 A photo of mechanic Joseph David, made by biologist Louis Boutan. Public Domain

The greatest advances in underwater photography began with mollusks. A French biologist, Louis Boutan, wanted to study them in their natural environment, so he ended up pioneering techniques and technologies for taking photographs underwater that would be unmatched by anyone else for decades.

Not content with the lab, Boutan was an adventurous scientist. At 21, in 1880, a year after he received his doctorate of science from the University of Paris, he traveled to Australia to study marsupial embryology. A few years after that, he became a lecture master at the University of Lille. He studied marine life in southwestern France, and in the Red Sea.

It was in southwestern France that Boutan first began to imagine the possibilities of underwater photography. The Arago Laboratory is situated above the bay at Banyuls-sur-Mer, a small fishing village close to the Spanish border, which, for centuries, had a strong sideline in smuggling. Arago was opened in 1882 by Henri de Lacaze-Duthiers, a highly respected zoologist from the University of Paris, for the study of marine biology. (It still exists today, as the Observatorie océanologique de Banyuls sur Mer). Boutan’s first dive to examine the mollusks that so interested him took place there in 1886, but it was only after he joined Lacaze-Duthiers in Paris five years later that he began to refine his ideas about underwater photography.

The experience of diving appears to have been revelatory for Boutan. He later recounted, “It was all so beautiful and so strange that I often found myself longing to be able to sketch or paint the scene, so as to be able to bring up to the surface a souvenir of what I had seen below.” Boutan resolved to photograph these “submarine landscapes.”

By the early 1890s, photography had come a long way since Louis Jacques Mandé Daguerre introduced his eponymous daguerrotype to the world in 1839. Despite the advances, the process still required glass or metal plates, chemicals, and carefully calculated exposure times. In his book on the subject, La Photographie Sous-marine et Les Progrés de la Photographie, Boutan recalled his own doubts: “Is an underwater environment unsuitable for taking good photographs?”

Boutan wasn’t the first to experiment with underwater photography. In 1856, English solicitor William Thompson rowed out into Weymouth Bay, Dorset, to see what he could achieve with a wet collodion glass plate camera housed inside a specially made wooden box. He lowered the box 18 feet into the water and, using a length of string, pulled the shutter. The result is regarded as the world’s first underwater image, though the resulting photograph depicts only murky grays.

Boutan knew that were two major issues to contend with in underwater photography: pressure and light. So, like any good scientist, he began to experiment.

The first apparatus he designed, with the help of his brother Auguste, an engineer, was a detective camera (a small inconspicuous style of camera for the time) in a waterproof copper box. A lever operated the shutter and plates, and a rubber balloon, linked to the the box via a tube, squeezed air into the box as it descended and the pressure of the water built up. Boutan first tried to use this device in 1893, but he found the results “uniformly beclouded.”

He continued to experiment, using a blue filter to offset the cloudiness, and moving to the neighboring bay of Troc for better visibility. Then, in 1896, he tried something completely new: a camera in which the plates were left unprotected from the water. He used specially varnished plates to counteract the effect of the salt water, but the results were, in Boutan’s words, “mediocre.”

So Boutan revisited his first apparatus, with improvements. He made the lens astigmatic to account for refraction. The box that held the camera was made of iron, not copper. These additions added some complications: It took three men to move the device. The new lens could not be focussed by pointing it down at the sea bed, so the camera had to be lowered just beneath the surface using a pulley. Boutan placed a slate containing writing at a fixed distance from the lens and adjusted the focus accordingly.

Whether Boutan was himself submerged to take the photograph (in a metal-helmed diving suit) or not depended entirely on depth. If he was diving he would get into position and signal, via a rope, for the captain to lower the apparatus, in three parts: the stand, followed by the box itself, then a weight to stabilize the whole thing. Once set up—Boutan described as a “leisurely process”—he signaled, via the rope, for the captain to start timing the exposure. The captain would then tug on the rope when the time was up, Boutan could close the shutter, and both he and his contraption could return to the surface.

On other occasions, Boutan simply lowered the camera from a boat and pulled the shutter with a cord, just as Thompson had done in Weymouth Bay decades before—but with a tweak. “When I began these experiments I found that fairly satisfactory pictures could be taken at a depth of four feet, at which depth it is unnecessary for the operator to submerge himself,” he wrote, in 1889. “By means of a metal tube rising from the sighting mirror, I was able to see from the surface the picture that I wanted to take.” He had crafted himself an underwater viewfinder.

Throughout his experiments, Boutan, like modern underwater photographers, was forced to address the critical problem of light. He tested different apertures and, along with electrical engineer M. Chaufour, created what was essentially an underwater flashbulb from a glass bottle containing oxygen and a magnesium wire that could be ignited with a current. But it was unpredictable. The bottle could explode or the light could be obscured with vapor or shine unevenly.

Boutan searched for another light source, and in the end, a light source found him. An optical manufacturer had produced two telescopes to photograph the stars for the 1900 Paris exposition, and wanted to include in his display images of the ocean. The president of the company wrote to Boutan and offered whatever he would need to create an underwater electric light source—with the proviso that any photographs Boutan took would be used in the exposition display.

With this much-needed round of funding, Boutan built two battery-powered underwater arc lamps that could burn, submerged, for half an hour, though it took 70 hours for a steam engine to charge them. Boutan tested them one moonless night in August 1899, and after another dissatisfying result, he repositioned the lamps on either side of the camera, and lowered the entire apparatus to 165 feet. His choice of subject was a submerged sign that read “Photographie Sous-Marine.” It took an hour to haul the equipment back on board, the total weight of which was between 1,100 and 1,320 pounds. But it had been worth it. Despite the depth, the image was sharp and clear.

Through his relentless experimentation, Boutan created photographs the world had never seen before. He took an underwater self-portrait, his cheeks comically puffed with air. And he took a portrait of a diver, his assistant, Joseph David, on an autumn morning in the bay of Troc, using his third and last underwater device. Boutan pulled the cord for the shutter from a boat 10 feet above.

The Frenchman was responsible for many firsts, including the first book on underwater photography, which was published at the time of the Paris Exposition in 1900. His students reportedly called him the “sea wolf.” But after those last experiments for the exposition, he didn’t take another underwater photograph. In 1929, he retired to Tigzirt-sur-Mer, on the Algerian coast and left his life underwater behind. Or did he? In his retirement he wrote—and painted undersea murals.

Often associated with Earth’s hottest places, these whirling columns show up on all seven continents—and beyond.
science

Under a microscope, even a toothbrush can be a work of art.
Video