Wisconsin and Minnesota Are Waging an Extremely Friendly War Over Who Has More Lakes - Atlas Obscura
Want to see fewer ads? Become a Member. 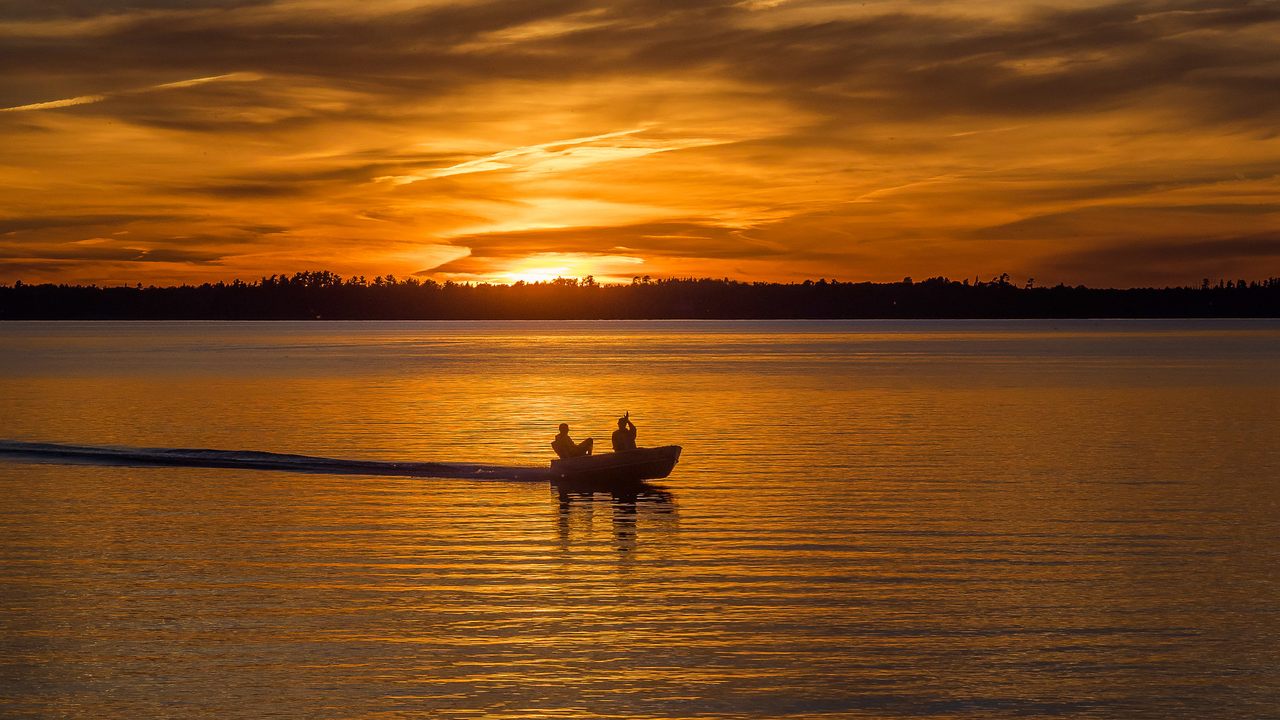 Twilight falls on Minnesota's Rainy Lake. jck_photos/CC by 2.0
In This Story
Destination Guide

Deep within what is arguably the kindest region of America, a very polite rivalry between neighbors has reached a boiling point. But this is no suburban conflict over pooping pups or obstructed views. This is a battle on a geographical scale. The two dueling parties? Minnesota and Wisconsin. The conflict? Which state has more lakes. The verdict? It’s complicated.

Though the regional rivalry has been around for quite some time, this time around, Wisconsin threw the first stone. It all started in May when Sara Meany, secretary-designate of the Wisconsin Department of Tourism, went on the Milwaukee radio show, Wisconsin’s Afternoon News With John Mercure.

Meaney made a simple but bold claim—that Wisconsin has 15,000 freshwater lakes. Mercure, realizing the import of the statement, sought clarification: “More than Minnesota?” Meaney responded decisively. “More than Minnesota,” she said. “Absolutely. We win. We win.” So sure was she that she said it twice.

Needless to say, Meaney ruffled the feathers of Minnesotans and limnologists alike, many of whom disagree—rather politely. “Not so fast,” countered the Minneapolis Star Tribune. On May 23, national fact-checking site Politifact entered the fray, citing each state’s official tallies. According to the Wisconsin Department of Natural Resources, an impressive 15,074. According to the Minnesota Department of Natural Resources, a paltry 11,842. Could Meaney have been right, could this central aspect of Minnesotan identity be built on soggy ground?

Not so fast. If you look closer, you’ll see that Wisconsin plays a little fast and a little loose with the definition of a lake. Minnesota defines a lake as a body of water greater than 10 acres in area. Wisconsin is far less circumspect. Thousands of the lakes in its tally are far smaller than that, and 60 percent don’t even have names. After a flash flood, Wisconsin might consider itself brimming with new lakes. By Minnesota’s standard, it’s neighboring state would have just 5,898 lakes, according to Politifact’s calculations. Ultimately, the site rated Meaney’s statement “False.”

“Wisconsin, the land of 5,898 lakes and a smattering of ponds,” a Wisconsinite with the handle @JasonSullivan tweeted at Politifact. But the Badger State, if the bold Meaney can be said to stand in for her constituents, refuses to budge. “I stand by the fact that Wisconsin has 15,000 lakes,” Meaney says.

But what makes Minnesota or anyone else the arbiter of what is and isn’t a lake? Who says it has to be greater than 10 acres in this, a federalist representative democracy? This further investigation opens up a taxonomic wormhole, one so lacking in real stakes that it may never be thoroughly resolved. As it turns out, there is no tangible, measurable difference between a lake and a pond.

One of the first standardized definitions of “lake” is still referenced today, and was coined by Paul S. Welch, the man who literally wrote the book on them. In his foundational 1935 tome Limnology, he defines a lake, rather eloquently, as “a body of standing water completely isolated from the sea and having an area of open, relatively deep water sufficiently large to produce somewhere on its periphery a barren, wave-swept shore.” By contrast, ponds are “very small, very shallow bodies of standing water in which quiet water and extensive occupancy by higher aquatic plants are common.”

For all their poetry, these definitions are turbid, according to Jake Vander Zanden, the director of the Center for Limnology at the University of Wisconsin-Madison. Perhaps a smaller body of water in which light could hit the bottom and ensure the growth of aquatic plants happens to be massive in area or so murky that light never makes it down there. Or perhaps there’s a smaller, human-made body of water such as a quarry that’s quite small in area but conceals hidden depths. These anomalies could technically, if somewhat illogically, be considered lakes.

While it’s outside of Welch’s base definition, ponds are often thought to be temporary bodies of water, while lakes are more permanent. But consider Australia’s Lake Eyre, which spends most of the year as a dry basin but occasionally fills, at which point it becomes the country’s largest lake. How are we supposed to come up with a clear taxonomy if nature can’t seem to make up her mind?

To further complicate matters, Wisconsin happens to be overrun with lakes (by Minnesota standards) that have the word “pond” in their names and ponds that have the word “lake” in their names, Vander Zanden says. Sometimes ponds are just rebranded in the great, holy mission of marketing homes. In New Hampshire, both Mud Pond and Dishwater Pond were renamed Mirror Lake. Where would you want to live?

To avoid this confusion (rather than settle it), the U.S. Geological Survey (USGS) has no official definition of a lake. Instead, it lists lakes and ponds in a single category in its National Hydrography Dataset. The same is true for other geographic imprecisions, such as mountains versus hills and rivers versus creeks. The agency admits these distinctions may be too large or too flimsy or too squishy to ever quantify. “Such definitions as exist derive from the particular needs and applications of organizations using them,” states the official USGS FAQ on the subject. “Broad agreement on such questions is essentially impossible.” And this is the loophole that Wisconsin, apparently hungry for officially counted lakes, stepped on through.

After all, this lacustrine rivalry isn’t always cordial. In fall 2017, a vigilante plot surfaced on Facebook, according to the Pioneer Press. The aim of “Go to Minnesota and Steal Their 11,842 Lakes” was rather clear. “Just tired of them being so smug with their 10,000 lakes,” Wisconsin-based organizer Marissa Stockman wrote on the Facebook event listing. Her plot inspired others, including “Weigh Down Minnesota’s Lakes with Rocks So People Can’t Steal Them,” “Steal All the Rocks From Minnesota So They Can’t Weigh Down the Lakes,” and “Combine All Cabins Into a Robot To Defend Minnesota’s Lakes.” This, folks, is how wars start.

Ultimately, none of this matters because Minnesota wins. When Politifact calculated the number of lakes in each using USGS’s federal data, Minnesota topped Wisconsin in each head-to-head. If you go by the USGS’s clumping definition of a lake-pond, Minnesota has 124,662 to Wisconsin’s 82,009. If you go by water bodies with official names, it is 8,784 to 5,481. If you define lakes as bodies of water of 10 acres or more, Minnesota wails on its neighbor: 14,444—even more than Minnesota’s own estimation of 11,842—to 6,176. All hail Minnesota, Land of Way More Than 10,000 Lakes. (“10,000 Lakes” is emblazoned on Minnesota’s stock license plates. For what it’s worth, Minnesota offers a number of other plate designs, such as one for motorcycle-riding retired firefighters that’s used by a select 33 residents.)

“Wisconsin is known as ‘America’s Dairyland,’” Vander Zanden says. “Though I guess we could change it to ‘15,000 Lakes, More Than Minnesota.’” But he immediately backtracks. He is a limnologist, after all. “But seriously, Minnesota has more lakes,” he says. “Factually, they do.”

Vander Zanden suggests that Minnesota could quash this rivalry by ceasing to undercut its lake total. “I don’t know why they would underestimate the number of lakes on their license plate. Why would you do that?” he exclaims. “They could still round down, but start at a more realistic number. It’s like being six-foot-two but saying you’re only five feet tall.”

When asked if he would consider revising the state’s license plate slogan, John Edman, the director of the Minnesota Department of Tourism, answered with sound marketing logic. “‘10,000 Lakes’ just has a nice little ring to it,” he says. “Sounds a little better than 11,842.” According to Edman, Minnesota’s homespun modesty is as much a virtue as its abundant lakes. “We just measure our lakes a little bit differently here,” he adds. So for now, Minnesota’s underestimated motto will live on on car bumpers throughout the Midwest.

But if the neighboring states can agree on one thing, it’s that they love their lakes and want everyone to come see them. “We have large lakes, small lakes, and ponds, well-known lakes, lakes of all kind,” Edman says of Minnesota. Meaney shares the sentiment. “I would encourage anyone from Minnesota to join us in Wisconsin and count as many lakes as they possibly can and let us know what they find,” she says. “Maybe over a beer!”

Vander Zanden’s compromise is even more congenial, if unwieldy as a tourism come-on. “These two states both have an amazing abundance of natural resources,” he says. “Maybe we should band together and say that, together, ‘We have so many lakes.’”

But not enough, actually. Not enough for any kind of title or superlative, not even close. That distinction belongs to Alaska, the country’s lake king by any and every definition. The state’s Department of Mining, Land, and Water puts the total at three million. They can’t even count the ponds.

There's a Massive Conch-Shell Graveyard in the Caribbean

“It sounds like if you got a big Slurpee, and then dumped it on the ground.”
meteorites

Our planet is pockmarked with the scars of these extraterrestrial visitors. Morgan Freeman would be terrified.
cemeteries

Why the Future of America's Clearest Lake Is Murky