Why Does the U.S. Army Own So Many Fossils? - Atlas Obscura
Want to see fewer ads? Become a Member. 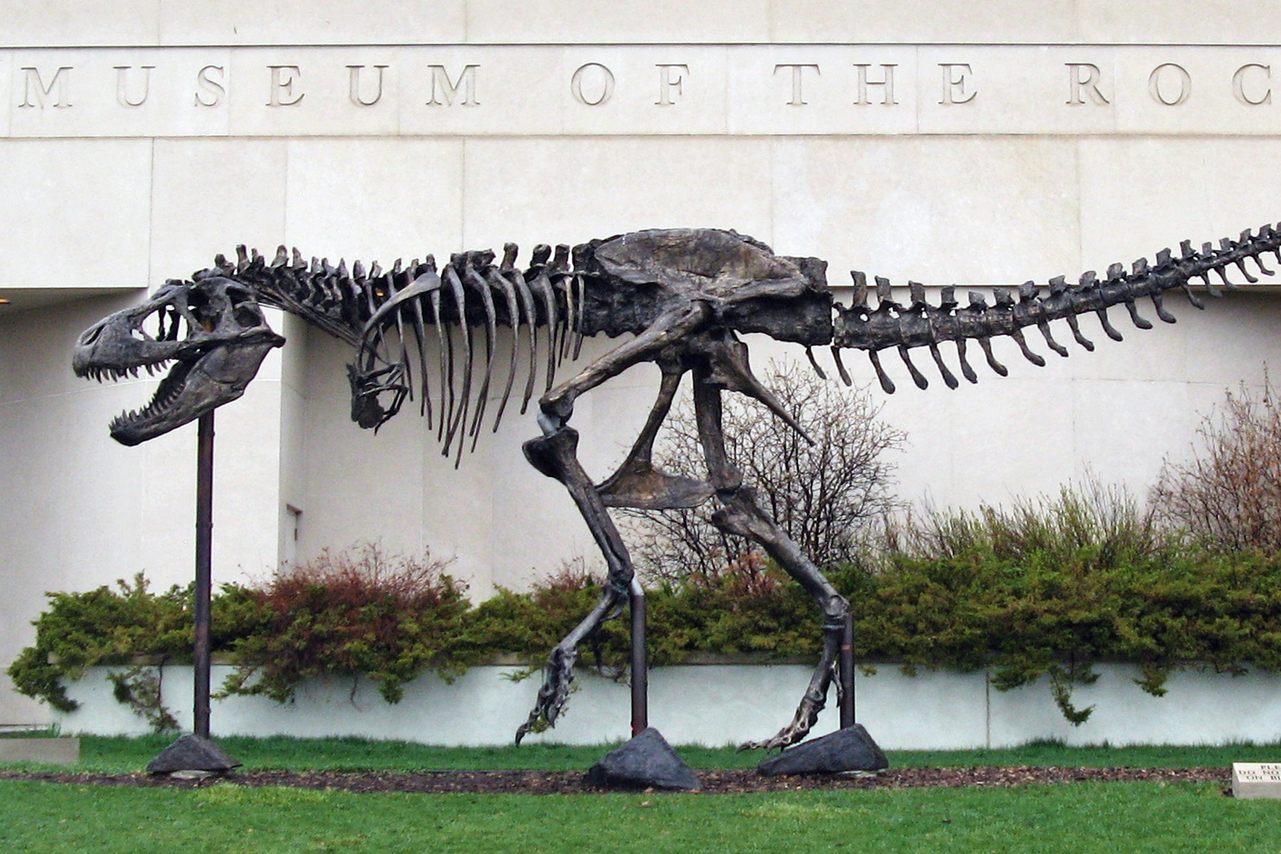 A bronze cast of the Army-owned Wankel's T. Rex, affectionately nicknamed "Big Mike," guards the Museum of the Rockies. Greg Goebel/CC by 2.0
In This Story
Place

This record-setting hydraulic dam in the Montana badlands was one of FDR's most ambitious public works.
Destination Guide

In 1993, the sea seemed to return to Coralville, Iowa. Over 28 days of rain, 17,000 cubic feet of water flowed over the spillway of the dam there, obliterating roads and effectively wiping out the state’s yearly crop of corn and soybeans. The Coralville Dam, built in the 1950s by the U.S. Army Corps of Engineers to provide flood protection for the Iowa River Valley to the south, was named after the city, which had gotten its oddly maritime moniker from the ancient fossilized reefs that stud the river’s limestone. Once the rains had stopped, the Corps returned to the site to discover that the floods had eroded around five feet of limestone from the edge of the spillway, cleaving the gorge into a succession of 375-million-year-old fossil beds teeming with marine creatures that had once made their home in the sea that became Iowa. All of those creatures, legally, belong to the U.S. military.

Rather unintentionally, the U.S. Army Corps of Engineers owns an enormous collection of fossils that would turn any paleontologist green with envy. “The U.S. Army Corps has collections that span the paleontological record,” says Nancy Brighton, a supervisory archaeologist for the Corps. “Basically anything related to animals and the natural world before humans came onto the scene.” The Corps never set out to amass this prehistoric tome. Rather, the fossils—from trilobites to dinosaurs, and everything in between—came as a kind of byproduct of the Corps’s actual, more logistical purpose: flood control (among other large-scale civil engineering projects).

The agency was created during the Revolutionary War, according to the Corps’s site. General George Washington had just ordered one of his colonels to build fortifications at Bunker Hill when the Continental Congress realized the task was impossible, as they did not actually employ any engineers trained in military fortifications. So they hired several former French officers, with the appropriate experience, to serve in the Continental Army. In 1802, the Corps of Engineers became a permanent branch of the U.S. Army, and since then has handled many not-so-flashy public engineering and construction management projects. In their portfolio are a lot of dams.

The Corps’s accidental fossil collecting began in earnest during the Great Depression, after President Franklin Delano Roosevelt passed the Flood Control Act of 1936. This monumental civil engineering project led to the construction of countless dams, levees, and dikes. The scale of the work required the Corps to conduct surveys of the designated land to ensure no archaeological or paleontological resources would be destroyed or disturbed. The Corps manages some 8,000,000 acres of land, which shakes out to a whole lot of artifacts and fossils.

“I would say the majority of our archaeological [and paleontological] collections have come from the construction of the hydropower and flood control projects that happened in the 50s, 60s, and 70s,” says Jen Reardon, an archaeologist with the Corps. In the 70s, for example, the Corps blasted through earth and rock to build an emergency spillway for the Caesar Creek Lake dam in Ohio. The work shattered layers of shale and limestone to expose an ancient seabed approximately 438 million years old, studded with brachiopods, bryozoa, and crinoids.

While many of these fossils are left in situ, like in Coralville, the Corps has taken pains to excavate certain superstar specimens. In 1988 in the Fort Peck Reservoir in Montana, amateur fossil hunter Kathy Wankel saw something sticking out of a slope in the Hell Creek Formation, a spectacularly rich fossil site. Wankel remembers the fortuitous way the light fell on the cornice of stone, illuminating a webby pattern of bone marrow, she told The Washington Post. It was Corps land, so in the years that followed, the Army brushed away the dirt to reveal a 38-foot-long Tyrannosaurs rex skeleton, almost 90 percent intact. Known scientifically as MOR555 and casually as “Wankel’s T. Rex,” the skeleton was a paleontological gold mine—the first tyrannosaurus found with a complete, laughably tiny arm.

Wankel’s T. Rex, also known as the “Nation’s T. Rex,” was on display in its home state of Montana at the Museum of the Rockies until 2014, when it was shipped in 16 crates in a custom FedEx truck to its new home at the Smithsonian National Museum of Natural History—after the museum had arranged a 50-year-loan with the Corps. In Montana, Wankel’s T. Rex was displayed in a death pose, its bones arranged to show visitors what actually emerged from the dirt. But at the Smithsonian, the tyrannosaurus will stand up for the first time, craned over a fossilized triceratops.

Like Wankel’s T. Rex, most of the Corps’s collection that is no longer in the ground is not actually housed in a military building. Most pieces reside in local museums or universities. Reardon says a minority of items are actually on display, such as the collection of fossilized dinosaur tracks at the University of Colorado in Denver. The Corps encourages any institution that meets certain holding standards to put their specimens on display, but there are just too many to display all at once, she adds. Currently, the Corps is working to photograph and digitize its paleontological and archaeological collections so that people who can’t travel can still see them. But celebrity specimens such as Wankel’s T. Rex and “Peck’s Rex”—another one found in Fort Peck that will take Wankel’s place at the Museum of the Rockies—have never not been on display. They’re just too spectacular, and too scientifically important.

When asked if she has a favorite specimen owned by the Corps, Brighton laughs. She says the collection is too sprawling for any one person to understand it all. Reardon noted a partial triceratops and a hadrosaur, as well as an ancient lobster found in the Bear Paw Shale in Fort Peck—its shrimpy shell still red in the rock. Of all the lands controlled by the Corps, at least as far as fossils are concerned, “Fort Peck really seems to be the star,” Brighton says.

The Corps’s days of large-scale dam construction are largely gone, in part due to the rising costs required for the massive required surveys that would no doubt uncover historically and scientifically significant remains. Now, the agency’s main projects consist of providing disaster relief, constructing military fortifications, and the occasional, minimally invasive construction of a recreation area for the public to enjoy. As such, they come across fewer fossils today. Now, the Corps also must consult several archaeologists for substantial works, as well as with any federally recognized tribes and local communities in the area.

After all, the Corps’s collection isn’t limited to the Jurassic. Much of the archive is actually archaeological, pertaining to human history in America, both prehistoric and fairly recent. “There is a very informal rule of thumb that specifies 50 years, around a generation ago,” Brighton says, in reference to how old an object must be to be considered archaeological in nature. “The idea is that you as a researcher are distanced enough from the event and the object to objectively look at it.” But many of the human-related items the Corps holds are still pretty old, such as a serrated bread knife made by a Native American tribe, which Brighton remembers as looking particularly modern. “The person who made [the knife] was extremely skilled,” she says. “Like you could go out and skin a deer with it right now.”

All artifacts pertaining to federally recognized tribes go through a consultation process with tribal leaders, but many stay in the Corps’s collections for preservation. Objects that fall under the Native American Graves Protection and Repatriation Act, including cultural items excavated or discovered on tribal land after 1990, are returned. “That protects funerary objects, sacred objects, and human remains,” Reardon says. “And we work with the tribes to identify which items in our collection fit the bill to make sure we return them.” Dinosaurs, however, have no such questions.

Though it owns all traces of ancient life that fall within its lands, the Corps really has no need for more fossils. But in some places, the properly permitted can go collect them. At Caesar Creek State Park, with a permit, and after listening to a short spiel on collecting rules, you can head off to the spillway for a peek at the ancient world. Early spring is prime fossil hunting season, right after the winter freeze and thaw cycle breaks up the rocks and exposes more fossils. No tools are allowed, but you’re allowed to take home any specimen that fits in a rock smaller than your palm, so keep an eye out for small fossils (or bring someone with big palms).

Even a fleeting visit can leave an impression when conditions are right.
Video